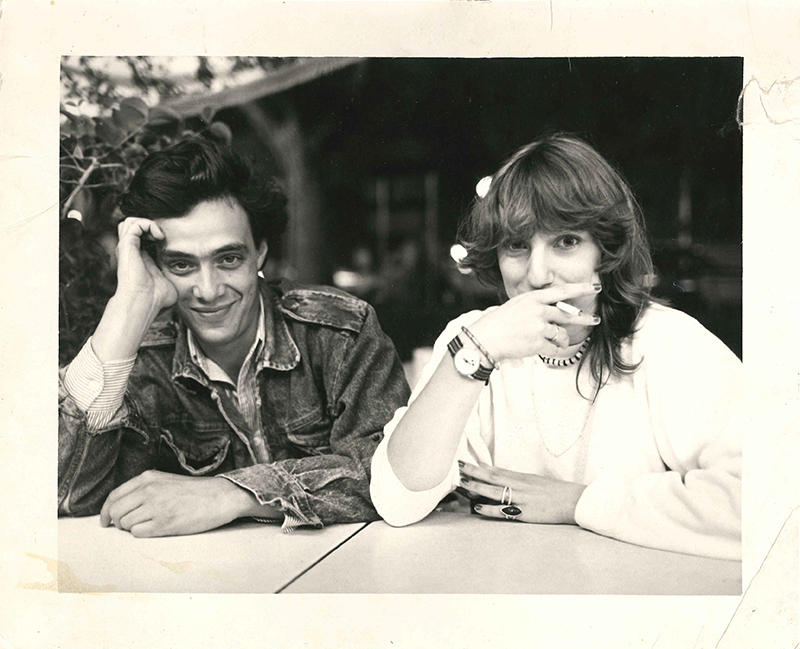 Fabulous hair. Fabulous smile. Fabulous taste. I should have known that I was looking at a photograph of the late art dealer Colin de Land when I found this black & white print in a box at a flea market in downtown Manhattan shortly after his death in 2003. I’ve hung the portrait up in every place I’ve lived in since then, and become irrationally invested in its provenance, but for some reason it took me more than a decade to look up the name stamped on the back: Daniel S. Sorine.

I’d assumed this impossibly stylish young man with the denim epaulets was just an anonymous charismatic youth captured, like many of Sorine’s other portraits, in Central Park, or a well-appointed backyard in New Jersey.

So I found Daniel’s address and sent him an email (Subject: “portrait print: Colin?”). He wrote back a few hours later, confirming that it was Colin and his girlfriend at the time, in Cannes, France, sometime in the 1980s.

Now I knew for sure a few things I hadn’t known before, like the relationship of the young man to the young woman, but the mystery only deepened. For example, I have never been able to decide who is smoking the cigarette. I mean, I know it’s the young woman, but at the last moment manage to persuade myself that it could just as easily be the opposite of what I’m convinced is right.

You know that thing about how the eyes of certain portraits are said to follow the viewer around the room, regardless of where they happen to be standing? I was starting to feel like an image-obsessed character in a nouveau roman by Robbe-Grillet. As if I had always known these strangers.

Why do we identify so much with certain portraits? Roland Barthes located the origin of this particular poignancy in the so-called punctum — in wounds and trauma. In Camera Lucida (1980), an autumnal reevaluation of photography that people either love or love to hate, Barthes writes:

Back in 2003, digging through crates of paper ephemera was a grimy but intensely personal and truly serendipitous activity — cathartic in a way that the bloodless Google search bar and the endless digital sleuthing it facilitates is not.

Nowadays my fate would have intersected with this image randomly, while scrolling through some unrelated content, if it intersected at all. Would I have noticed the way these two wear their expressions? Their powerful symmetry? Would I have picked up on the hairline — in itself, nothing — where their elbows and tables meet, and which halves the photograph neatly?

Roberta Smith, in her obituary for de Land, does not gloss over his personal style:

With little display of exertion or financial solvency, Mr. de Land oversaw galleries in different art neighborhoods for nearly 20 years. He was known for his relaxed work habits and even more relaxed art installations, which did not all open on time, as well as an insistent sartorial style that presaged the “white trash” look. At times he exhibited fictive artists, like John Dogg, whose work was widely assumed, but never confirmed, to have been made by Mr. de Land and the artist Richard Prince.

The enigmatic smile reminds me of the one he has in a later photo with Andy Warhol.

In the moments after I finish typing this sentence, I receive one last email from Daniel.

“I spent quite a long time in Colin’s company in France and NY,” he writes.