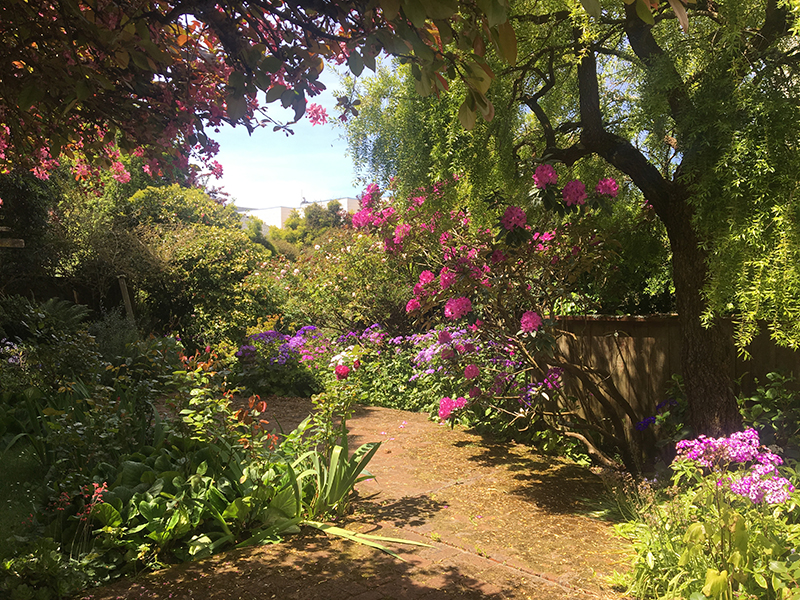 It was not easy to get here. It took me many rainy days in San Francisco to self-reflect, thinking about inequality and privilege. Witnessing a homeless man sleeping on top of a sewer lid to warm his body with toxic gas while another man took a picture of this scene, maybe to post on social media; deep thinking about a country’s history that I did not feel any responsibility for before.

Belonging is a picture of a house painted by a five-year old.

It was in December when my therapist told me that it was almost like I was mourning. She paused. For home.

Oftentimes the thing you are looking for is already there. You just do not see it, because it is 15% off the center. When I read a Judith Butler quote on Instagram one day, I thought this was it.

I was scrolling down my feed, heading into the city on BART — a system built to be loud to show that the residents of this neighborhood did not deserve any care. The quote was from Butler’s 2003 essay, “Violence, Mourning, Politics”:

When we lose certain people, or when we are dispossessed from a place, or a community, we may simply feel that we are undergoing something temporary, that mourning will be over […]

Taking the boat on the Bosporus every day, watching seagulls, feeling the breeze, simit-çay (Turkish bagel and tea). How much cliché does it take? 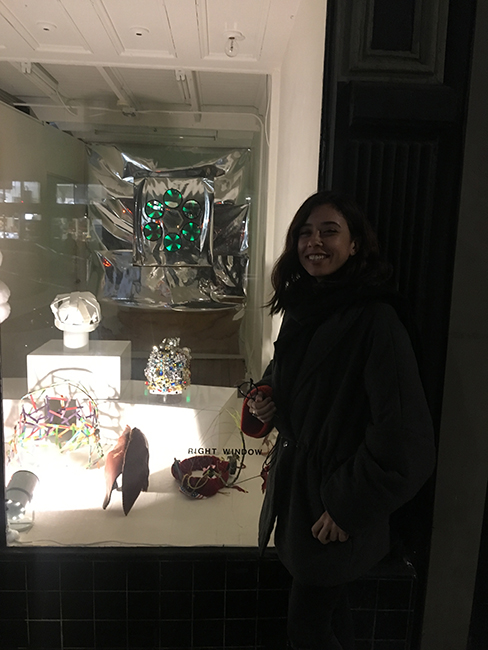 Looking at Butler’s quote, I can only see the word “PLACE.” Maybe I will never feel home because that sense of place is lost. Maybe it will never come back. A visit to the Iranian Diaspora show at Minnesota Street Project could support this theory. I tour around the exhibition desperately, many times, like I lost something in the gallery space, something precious to me. A miracle answer, a cure for pain; something that ties these artists to each other, something about that distant place that never was. Artists all from Iran who live in the East Bay: an overwhelming category. It can’t be only that, can it? The actual experience of it for each individual is unique, like DNA.

Then, what is that?

Belonging is teleporting into other beings.

This part is more inspired by today’s Netflix goodies, all overly interested in the concepts of afterlives and parallel universes: The OA (which I decided to watch because its second season was shot in San Francisco), The Discovery, Stranger Things, Westworld, and many others.

Rosha Yaghmai’s show at the Wattis suggests the perspective of the other. Rosha sees a spider in her bathroom,  gets teleported into the being of the spider, and asks you to do the same. 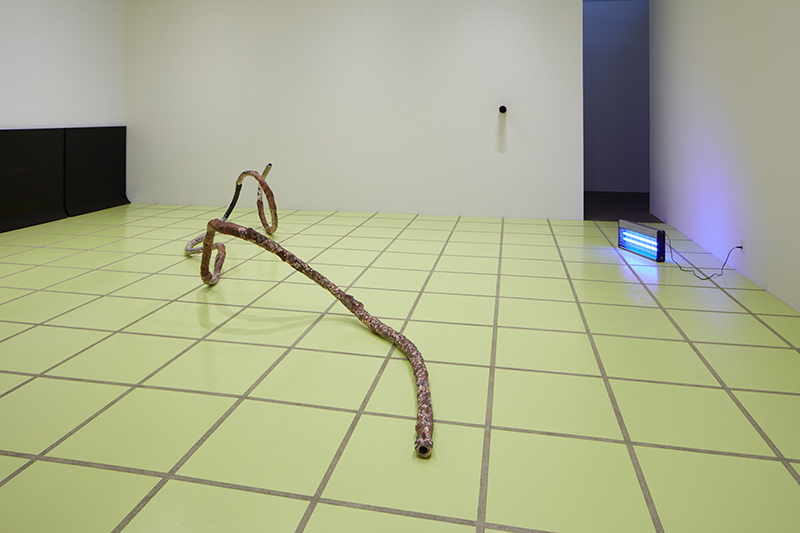 You are in the bathroom, surrounded by the enormous yellow tiles, hearing the annoying electronic magnetic sound of the bug zapper, shrunk into your 90% smaller self.

When I am back at home, trying to learn cooking as a twenty-nine-year old, I see ants on my kitchen sink. I think about Rosha, but it does not stop me from killing them with a piece of cloth.

Can belonging be a garden in San Francisco?

It started with us getting robbed, then finding a house beyond our budget. We fell for the garden. I have never watched roses grow from scratch before. They do not die like in cartoons — slowly bending over their rotting flower with a sad move — rather their leaves are thrown away with the wind; messier than melancholic or dark.

In the garden, I read Archibald Thorburn’s British Birds Vol. I, which I took from Prelinger Library’s free book stroll — the library which could easily be a garden. To answer my mom’s question: Archibald Thorburn was a Scottish artist and animal painter and bird illustrator, painting mostly in watercolor. 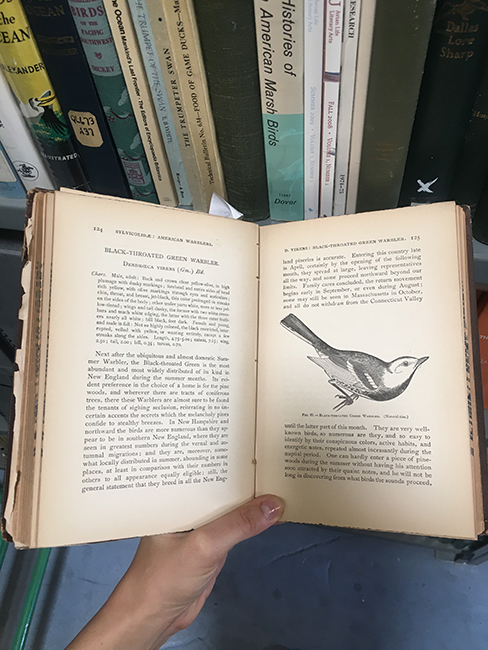 Archibald Thorburn’s British Birds Vol. I at the Prelinger Library.

But then it was Tuna Erdem of Istanbul Queer Art Collective who reminded me in our collective writing “Flow” that harvesting a garden brought inherent violence to the table. Who was I to demand any right to this garden? I did not know its history. I was not the one who put these seeds into the soil.

Was I really a legal Alien? Was I an alien?

Belonging is keeping it weird — the potato level.

Dena Beard of The Lab says: We need to keep San Francisco weird. 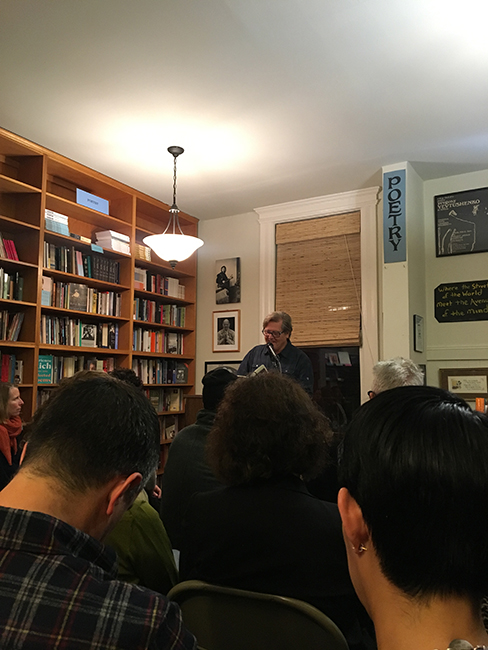 I’m watching naked women stamp themselves and drink pig blood through tubes in their noses while listening (through ear plugs) to noise music at The Lab. I’m at Jordan Stein’s gallery, making eye contact with a hippopotamus staring at the camera behind a chess board, ready to play — a show about fries. I’m listening to Steve Dickison read his poems at City Lights Bookstore on, as he mentions, Rilke’s hundredth birthday. I’m listening to Claudia La Rocco reading from her petit cadeau, (an android coming-of-age story and invisible love letter to dance), accompanied by Phillip Greenlief’s saxophone and Alex Escalante’s dance moves. I’m randomly learning about ATA by stepping in one night, watching cat videos. I’m at the Internet Archive, which makes close to human-sized sculptures of their employees if they work there more than three years — simply because they care. 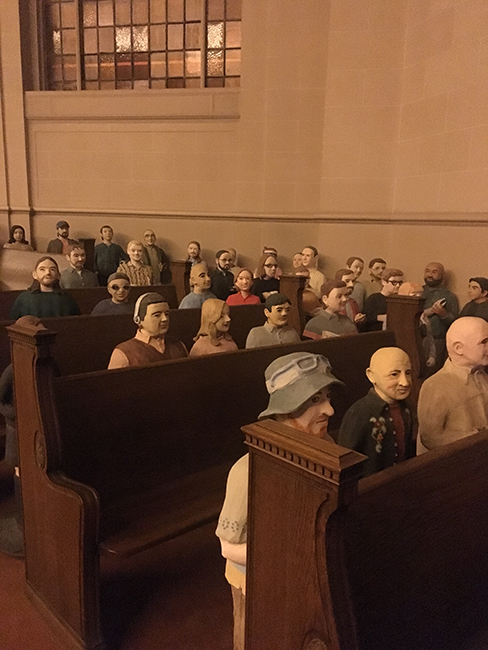 I do want to keep it weird. I just do not know where to start from.

The question “Why don’t Americans like long sentences — or is it because I do not know how to handle those sentences in a foreign language?” can turn into an existential crisis.

Belonging is finding your people.

But maybe when we undergo what we do, something about who we are is revealed, something that delineates the ties we have to others, that shows us that these ties constitute what we are, ties or bonds that compose us.

Who am I without you?

Looking at a model of 1930s San Francisco for Take Part, moderating a conversation, I am trying to see what the participants in this conversation — the locals — see in the model. At different San Francisco Public Library branches, I am looking at model-sized hills, roofs, parks, streets, factories, tunnels, train roads, but I cannot see that famous pastry shop they keep mentioning. Neither can I inherit their memories of this place.

In his introduction to The Undercommons: Fugitive Planning & Black Study, Jack Halberstam says: “It ends with love, exchange, fellowship. It ends as it begins, in motion, in between various modes of being and belonging…”

Back at the library, I see the park where we drank lemonade and talked with Deena Chalabi —Dolores Park. It was here she told me about the story of the soul that comes later when a body moves to a new place. An Indigenous American fable that she also heard from a friend. I imagine my restless soul, miserably lost over the clouds of Kazakhstan, searching for my body. 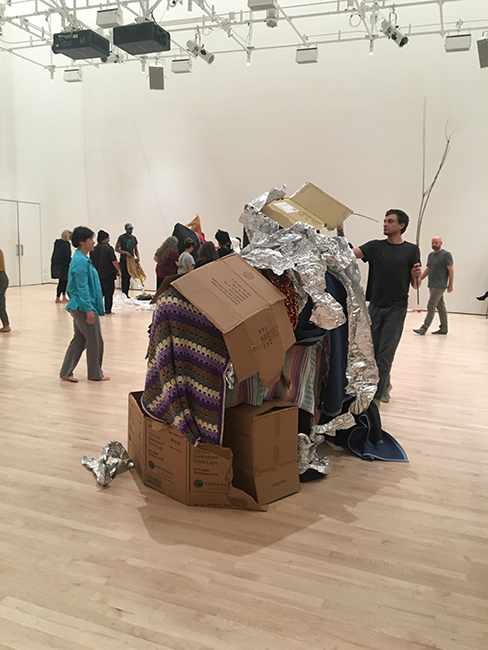 The amorphous forms of the New Age homes that we made out of branches and blankets, covering each other’s bodies as part of Keith Hennessy’s de(composition) workshop at SFMOMA.

Sitting on the parquet floor of SFMOMA, listening to the conversation that artist and activist Keith Hennessy initiated about interrelated, racialized histories in San Francisco, I look around. We are surrounded by the amorphous forms of New-Age homes we made out of branches and blankets, covering each other’s bodies; sometimes simply watching the houses melt, in awe, sometimes volunteering to become a melting house. A moment of impossibility. This is as close as it gets to the Gezi Movement 1

Steve Dickison says: ‘’She is singing. I get excited when she does that. You would too.” 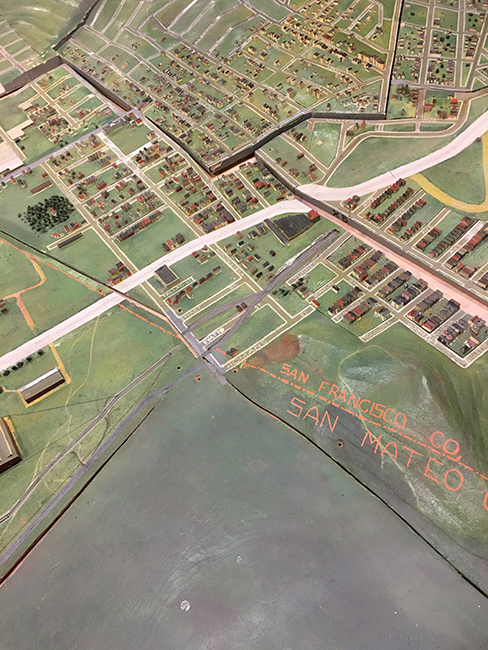 An image of the thousand-square-foot scale model of San Francisco built in the late 1930s Model, lying at San Francisco Public Library Facility and Warehouse.

It is why my mind has been carrying around Glissant’s Poetics of Relation (Errantry, Exile) for a while. He argues that each identity is defined through a relationship with the Other. Something to hold on to.

So, we sing a lullaby for each other.

What Robert Bolaño calls Amulet, also in part the title of the show at the David Ireland House.

It is like climbing to the attic at Ireland’s house to see a video work. Bachelard believes that the unconscious hides in the attic. In contrast to Borges’s Aleph which requires one to have a look at the basement. Remember when we read these texts for our reading group at Galata Greek Primary School alongside Lara Ögel’s solo show? Thinking about collective consciousness, communal mourning, loss, death, and infinite pity here in the school’s library that does not host students anymore, but instead a wooden table, old books on shelves, and a violent history of forgetting. 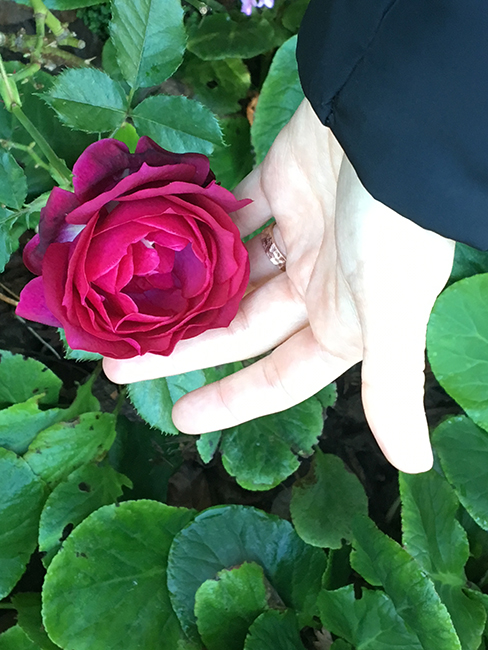 A rose in Naz’s garden.

Bolaño: “So the ghost-children marched down the valley and fell into the abyss. A barely audible song, a song of war and love.”

An army of love.

But what kind of love could they have known?