Baghdad by the Bay

Legendary newspaper columnist Herb Caen loved San Francisco so much he gave it a new name. Two of his early books about San Francisco were Baghdad by the Bay (1949) and Baghdad: 1951 (1950). The moniker appeared often in his columns in the 1950s.

Historians have claimed Caen wanted to give San Francisco a new narrative and a sense of exotic enchantment to reflect the reality of a city that was open and cosmopolitan in many ways — a crossroads. After World War II, San Francisco had a higher percentage of immigrants and foreigners than many US cities, its largest African American population, and, overall, a much more even distribution of wealth than it had seen before or has seen since. Many languages, many ways of life. Of course, San Francisco was far from perfect. But Caen was a talented journalist who told stories and created a fairy tale for the city’s residents to consume, reflecting its sense of itself as special, and tapping into the fuzziness of a shared Orientalist imagination.

“He was trying to capture a style, to enjoy it and celebrate it,” author Gary Kamiya told me from his home in North Beach. “He maintained a cosmopolitan attitude to all the changes, from the Beats to the hippies to the punks… He also wrote very beautifully about just the physical appearance of the city. It’s almost like the thing that we hold onto, we older San Franciscans, buffeted by the indignities of the present. There is this kind of saving grace that no matter what happens, no matter all of the wonderful, dear old places that die and neighborhoods that change, or how many tiresomely rich young people flood in, there’s still the incredible physical beauty of the place.”

Kamiya wrote about Caen after he died in 1997 and again in his love letter to the city, Cool Gray City of Love: 49 Views of San Francisco. In between, Kamiya wrote numerous lengthy essays about the Iraq war of 2003–2011 for Salon from San Francisco. “It did cross my mind at one point, that my town was called ‘Baghdad by the Bay’. I tried to look it up — where did that come from? I can only assume that it’s this kind of Arabian Nights fairyland thing.”

Caen could have been referencing Baghdad’s medieval glory as an imperial hub for trade and learning (and the context for the Nights), but more likely he was imagining something more timeless, more fictional, more Hollywood. 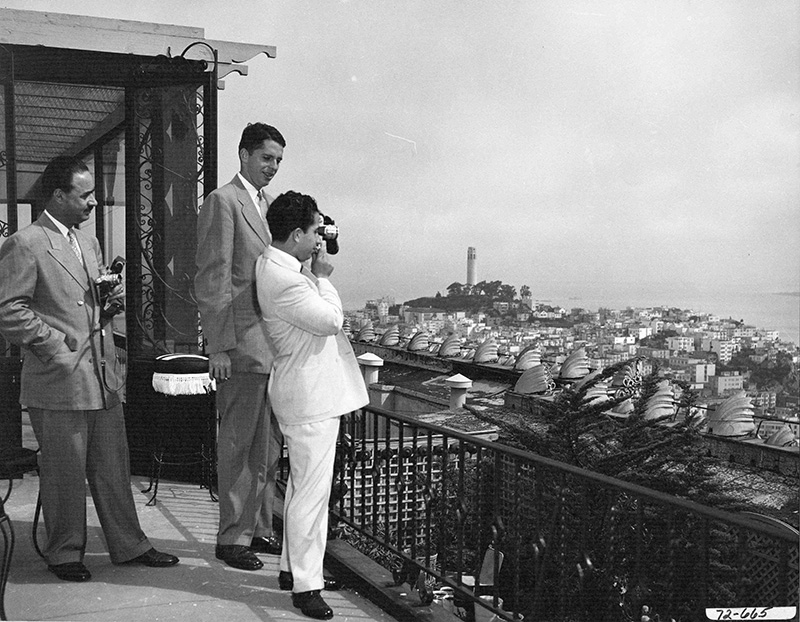 In any case, the real Baghdad, spread out across the wide plains of the Tigris river, was a boom town in the 1950s, the capital of an oil-rich Iraq. It also contained many languages and nationalities, as well as poets, painters, sculptors and others, reimagining the past for a different future. Its young monarch, King Faisal II, came to the United States for an official visit from August to September 1952. He visited over a dozen cities with ‘Abd al-Ilah, his uncle, the Prince Regent. Faisal was seventeen, a year away from ruling in his own right. In San Francisco he took photographs of the city while looking out across the Bay. Only a few years later he was killed, along with the Prince Regent and much of his family, in the first days of the Iraqi Revolution in July 1958.

Just months before, Herb Caen had coined his term “beatnik” to describe the Beat Generation stereotype, and by that time, tourists were coming to North Beach to look for the poets.

Sculptor Fred Parhad was born in the Iraqi capital and remembers hearing the name “Baghdad by the Bay” when he lived in West Portal, San Francisco as a child in the mid-1950s. He thought it was neat that the romance and history of an Iraqi city — the most civilized and advanced city in the Middle Ages — was important in America. (He was the only kid who wasn’t white in his school, and his teacher told him that boys like him ended up on Alcatraz if they weren’t careful.) When his family returned to the Middle East in 1958, he went to boarding school in Baghdad. He remembers that city as “quaint, wonderful, dusty.” Huge rafts on the Tigris, floating restaurants. He left again after the Revolution, making his way with his family back to the Bay Area in 1959. 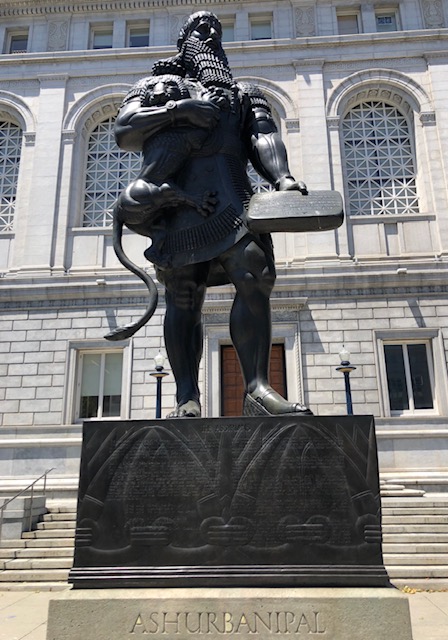 Parhad created a statue of King Ashurbanipal of ancient Assyria, described as as the “first Assyrian monument in the world in 2500 years.” Ashurbanipal established the first systematically organized library in the ancient Middle East, which contained the Epic of Gilgamesh, the oldest written story we have as a civilization. Fittingly situated between the Main branch of the San Francisco Public Library and the Asian Art Museum, this monument to the Assyrian people is also currently the only public monument that connects the Bay Area to the land that is now Iraq.

Named after another Assyrian king, Iraqi-born Bay Area poet Sargon Boulus once crossed the desert to get from Iraq to Lebanon without money or a passport. He was carrying only a small bag with his editor’s translation into Arabic of King Lear to give to a publisher, and some of his early unpublished poems in a leather notebook that came to be his magic icon. On the cover: Baghdad 1961.

Boulus wrote about the Beat Generation in Shi’r, a poetry magazine based in Beirut, and met Etel Adnan at the magazine. Once he arrived in the US in the late 1960s, Adnan helped him get from New York to San Francisco. They sat together in North Beach, at the Buena Vista, from which he could see Alcatraz. He was soon demonstrating for Native American rights and against the Vietnam War. He met Kenneth Rexroth and over the next decades he became part of the San Francisco poetry scene. He wrote and translated, continuing to introduce Arab readers to the work of the Beats and other poets. He told one interviewer, “I think that in poetry I have found something besides just pain and just nibbling at the bones of history.”

By the 1990s Boulus became disillusioned with the United States after the first Gulf War, and in the political aftermath of 9/11. As his translator, the novelist, scholar and poet Sinan Antoon has written, Boulus died in Berlin in 2007, shortly after correcting proofs of his final poetry volume. It contained these lines:

Where is it?
Where is the America I, the dreamer
crossed the sea for
Will Whitman’s America remain ink on paper? 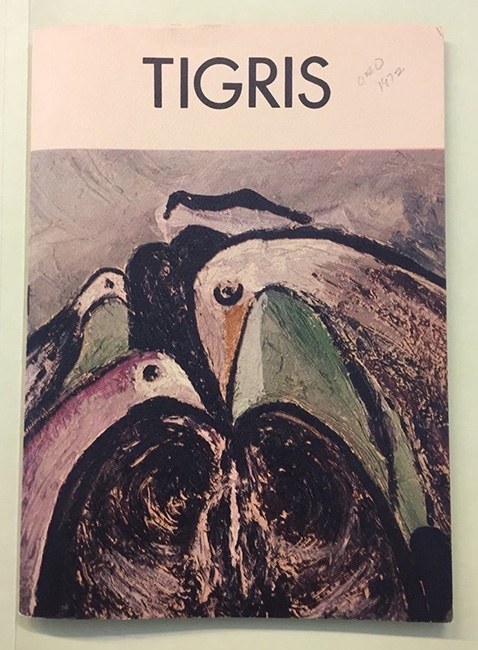 While in San Francisco Boulus edited and published a poetry magazine called Tigris, after the river that runs the length of Iraq, and through Baghdad. The cover art is by local artist Homero Herrera, and the cornerstone of this first (perhaps only) issue was a long poem by Etel Adnan. Her writing often contains references to the cultural legacies of Iraq. The first page of her much more well-known Journey to Mount Tamalpais imagines a connection: “Like a chorus, the warm breeze had come all the way from Athens and Baghdad, to the Bay, by the Pacific Route, its longest journey.”

Shortly before the US and coalition forces invaded Baghdad in 2003, Adnan began writing the incredible prose poem To Be In A Time of War.

At the same time, another poet, Beau Beausoleil, marched against the war but did not know what to make in response. In 2007, after the bombing of Baghdad’s al-Mutanabbi Street, he became an organizer. “I’m a poet and a bookseller, so I knew immediately that if I was an Iraqi, that’s where my store would be. As a poet, that would be my cultural community that had been attacked. Suddenly the distance just collapsed. I knew that there had to be a response.” First he put together a reading of poets, including Sinan Antoon. Later there was an anthology of writing (with editorial input from Antoon), as well as an exhibited collection of broadsides and then artist books under the banner of Al-Mutanabbi Street Starts Here.

A contributor to the anthology, Rijin Sahakian grew up in Davis and used to visit San Francisco often with her family, all of Iraqi origin. She has a childhood memory of driving past a restaurant on 16th and Market that caught her eye, called Baghdad Cafe: “It was one of the only times Baghdad conjured up something positive in the US. I was too young to realize what the Castro was or what it meant but there it was: Baghdad Cafe and rainbow flags. As a kid I just thought, wow, what a magical place, Baghdad on the side of the road and rainbows. It was really beautiful and charming without any context, now maybe more so looking back and in light of how much SF has changed. The city seemed open to every possibility then. Both cities. That was before the wars. That was the magic, this rainbow Baghdad possibility in the sunshine and hills of SF, that I’ve never seen, or felt since.”

One has to imagine Herb would appreciate that story. 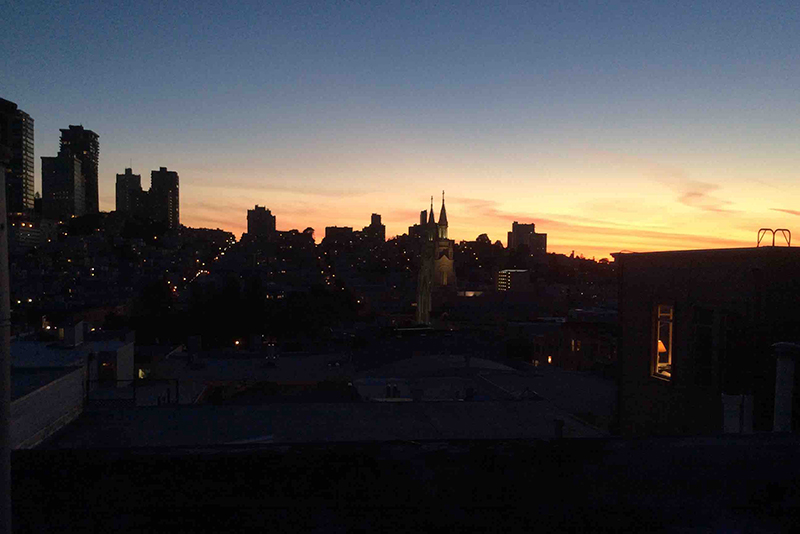