One crisp afternoon this spring, I walked through the Mission and Potrero Hill to have a conversation with artist Abbas Akhavan, CCA’s Capp Street Artist-in-Residence, about his exhibition, cast for a folly, at the Wattis Institute. As I hurried along, I wondered (and worried) about the future of San Francisco, but mostly I thought about what I’d been reading earlier that day on the turbulent history of Baghdad. Deep in my own process of digging for stories and fragments of narratives, I was unprepared for the feeling of grief that struck me when I turned onto Kansas Street and found myself transported to an eerily familiar time and place.

For his first solo US presentation at the Wattis, Akhavan has reconstructed the lobby of the National Museum of Iraq, based on a photograph taken in the wake of the looting it suffered during the 2003 invasion of Baghdad. The room he has created contains several objects, including empty vitrines covered in dust, a printed curtain, a pile of unfired bricks, and a statue of a lion, that together form a unified art work that he describes as “loyal but not obedient” to the photograph he began with. Akhavan spent months digging into the material possibilities of representing this particular image with Wattis curator Kim Nguyen and associate curator Leila Grothe, and the result was uncanny. I felt I’d passed through a portal to a place I had spent years imagining.

Akhavan has never visited Iraq, although his awareness of it began early in his life, with the Iran-Iraq War of the 1980s. His experiences of the country have been mediated largely through images on television and online, and those images have fueled a desire to explore the ways that Iraq has played a global role in systems of power. Many of his recent works have dealt with the politics of the destruction of Iraq’s heritage, with the impact of the most recent war standing in for the effects of so many other conflicts worldwide.

In this case, he chose a symbol of Iraq that caught the imagination of the world. As Mesopotamian history is considered part of the narrative about Western civilization, the looting of the National Museum of Iraq was a major news story at the time, and there was widespread outrage about the losses of materials from the so-called cradle of civilization, and the fact US troops did nothing, at least at first, to help staff protect the museum’s holdings. Some 15,000 objects were looted. More than half of those have never been returned.

In an early work about Iraq, Study for a Blue Shield (2010), Akhavan replicated the image of a crest placed outside spaces by UNESCO to denote cultural landmarks containing items of value to humanity and in need of preservation during times of war. He had learned that the staff of the National Museum of Iraq in Baghdad painted the blue shield on the roof of their building during the early days of bombing. Akhavan painted the shield on a gallery wall, then cut out the shield and placed it on the roof. An empty space stayed in the gallery, the shield having risen to the roof like a spirit. (Interested in the art-historical aspects of symbolism, Akhavan notes that the blue shield was first introduced in 1954, the same year that Jasper Johns created his first flag painting.)

Akhavan described his San Francisco exhibition as theatrical, a set piece, an event. The space he has reconstructed is one with its own sense of time, a space for waiting, a space of the in-between. It is an imaginary and imaginative space that is at times rather abstract (when seen from the back of the gallery, several objects reveal themselves to be hollow, or unfinished). Recreating the rooms of the museum, he said, would have been to create a destination, and he was wary of reproducing the artifacts themselves, so instead, he said, “you enter a gallery that is a lobby to nowhere.” He described the works within as “placeholders for an original that doesn’t exist.” Despite the work’s self-consciousness and these gestures towards abstraction, it seemed to me less like an event in itself than the re-staging of the aftermath of a very particular catastrophe. I couldn’t help feeling a palpable sense of loss. 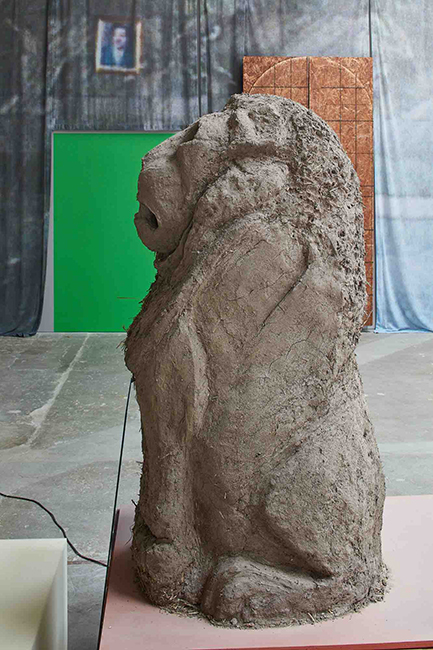 Artists like Akhavan dig into the meaning of things, especially when they choose to work with objects that come with their own stories, already replete with layers of association. But what happens to a symbol when it is mobilized in a new context? How does meaning change? What survives? When we look at a symbol, how does it communicate? Are we in agreement, or are there endless misunderstandings, willful or accidental?

In the Wattis gallery, the blurry portrait of Saddam Hussein on the far wall caught my eye almost immediately and made me feel uncomfortable, almost claustrophobic. I thought of the ways Saddam had used history for his own glorification, and archeology as a vehicle to promote his specific brand of megalomaniacal kitsch — in his rebuilding of Babylon, for example. When I mentioned this, Akhavan noted that most people didn’t identify him at first because the printed image on the curtain was so indistinct. I looked again and saw he was right. If you’re not carrying around a potted version of Iraq’s history in your head, it could be anyone — Charlie Chaplin, for example. (Later, Akhavan told me, after the photograph was taken, the portrait was removed from the museum wall. The spot where it hung is still full of bullet holes.)

The lion sculpture in the original photograph was made from stone, but Akhavan decided to make his from cob, from mud and straw, “one of the most ancient ways of building anything,” thereby connecting it to a pre-Stone Age moment (and placed it in front of a green screen, possibly the most futuristic of spaces). A previous work by Akhavan, Variations on Ghost, featured a larger-than-life fragment of a lion’s foot, a reference to an ancient sculpture of a lamassu (an Assyrian deity with a human head, an eagle’s wings, and the body of a lion or a bull, which stood as a guardian at temples and palaces) that was destroyed by ISIS. Made from compacted soil, the work emphasized the vulnerability of material culture. What happens, Akhavan asked, when a spirit guardian is destroyed? What work can it do?

I wondered the same thing about the lion. Not only a symbol of power in ancient Iraq, the lion is also modern Iraq’s national animal, despite the fact that it is now extinct within the country’s borders. The last lions were sighted along the Tigris in 1926, the same year the National Museum of Iraq was founded. 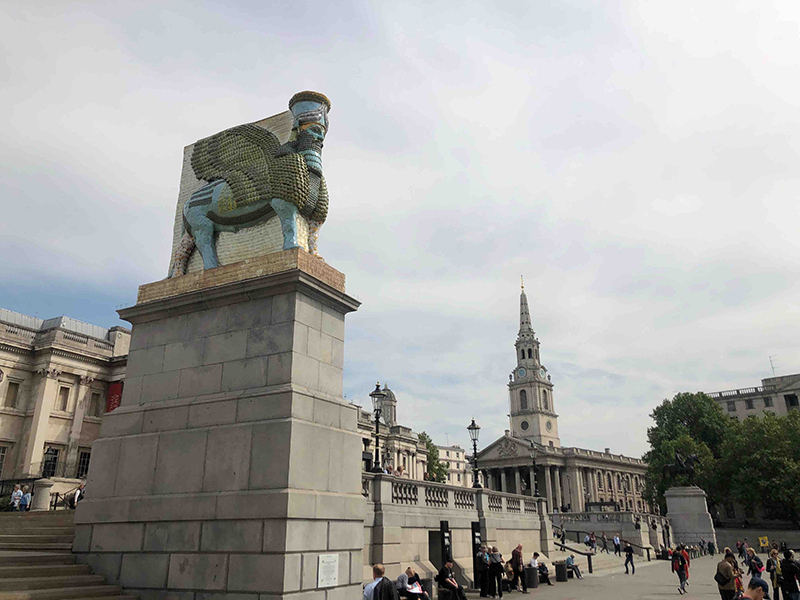 Michael Rakowitz, The Invisible Enemy Should Not Exist, 2018

This week I walked through Trafalgar Square in London and stood for a long time in its northwest corner, marveling at Michael Rakowitz’s The Invisible Enemy Should Not Exist. For his commissioned sculpture on the Fourth Plinth, perhaps London’s most visible platform for new public art, Rakowitz created a full replica of a lamassu, in this case a human-headed winged bull rather than a lion. The original stood at the Nergal Gate in Nineveh in northern Iraq (now Mosul) for more than 2,500 years before being destroyed by ISIS in 2015. The contemporary statue is made from of thousands of empty cans of Iraqi date syrup, symbolizing the decimation by war of the country’s date industry, once its second largest export after oil.

The work is part of a series with the same title in which Rakowitz has reconstructed, from similarly resonant but ephemeral materials, several objects lost during the looting of the National Museum of Iraq in the wake of the US invasion. Like Akhavan, he has described these works as placeholders, and his lamassu as a ghost.

Rakowitz has resurrected a benevolent protective spirit to look out over London, I think. It seems a generous gesture. The sculpture holds its own among the bronze statues of kings and military commanders that glorify centuries of British imperial conquest. Its majesty stems from its scale (curiously, the original lamassu had the same footprint as the plinth), its colors (the pale turquoise face echoes the water in the fountains in front of it) and its contested, ever-evolving meaning. Made from the humblest of materials, it acts as a painful reminder of what has been lost, and glints brilliantly, almost defiantly, in the muted English sunshine. 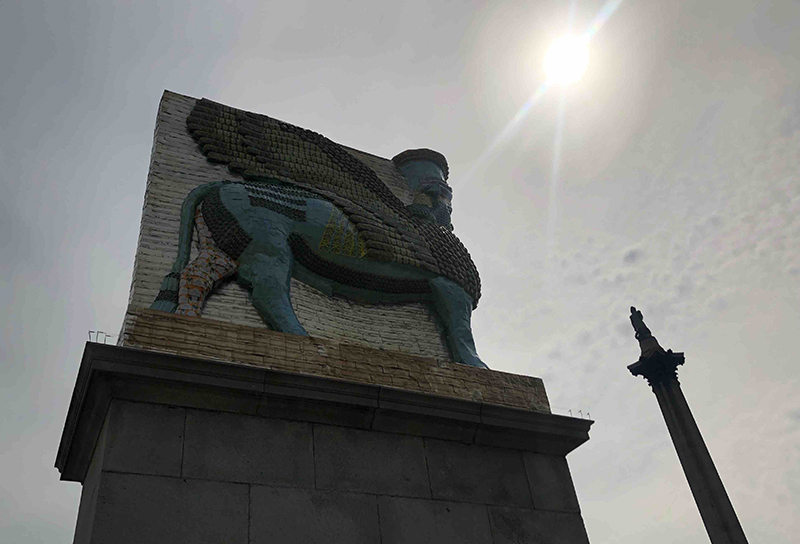 Michael Rakowitz, The Invisible Enemy Should Not Exist, 2018

cast for a folly is at the CCA Wattis Institute on Kansas St, San Francisco through July 27, 2019. The Invisible Enemy Should Not Exist is on the Fourth Plinth, Trafalgar Square in London through March 2020.