The Skyline is the Context 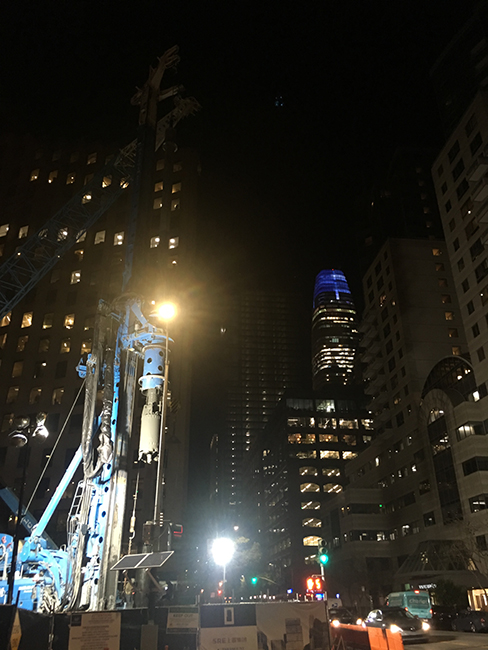 But the choice of inside or outside, of private or public, is outdated now.

Nightly, dancers enter the field of vision of people across San Francisco. They move slowly in dark silhouette on a golden background, tipping forward, gliding to a crouch. Their outlines are blurred; their height is several stories tall. They may become, abruptly or gradually, layers of rolling waves.

Mention ballet dancers to a Bay Bridge commuter and they may react as if reminded of a bizarrely shared dream. Jim Campbell’s Day for Night, a video work wrapped around the top of the Salesforce Tower, has caused numerous ripples in the local, architectural, and arts press, and, in its first months as a permanent installation, something like a ripple in my subconscious mind. Why are bobbing heads crossing the street? Those look like waves. A night or a month later, the images appear again, perhaps between buildings in the Richmond, from a hill in Potrero, or in stopped traffic on the I-280.

Day for Night evokes two ways of thinking about public art in the twentieth century: as a visionary artist’s statement on space or interaction, and as a sited forum for shared, responsive reflection. An example of a monumental, abstract sculptural statement is Richard Serra’s Tilted Arc (1981), a graceful metal curve that bisected a public plaza and polarized its public. On the other hand, public art that tends toward social practice invites dialogue with, in Miwon Kwon’s words, “the particular realities of ‘ordinary’ people and their ‘everyday’ experiences”; a fairly recent example is Candy Chang’s Before I Die (2011), in which a wall prompts personal, individual responses. Site-specificity, physical space, and public interaction are defined very differently in these three works, though each presents a physical or philosophical disruption to the everyday lives of passersby.

For its part, Day for Night is engaging in monumental abstraction as well as making a claim to personal connection. The projected forms are wedded to their enormous and visible podium, and thus necessarily monumental, and the partially abstracted images are meant to be just barely recognizable. For decades, Campbell has worked with the idea of reducing visual information to the minimum amount required to recognize form. In Day for Night, his sources of light shine back toward the reflective tower, blurring movement and blunting the amount of light projected. At the same time, the images are intended to communicate and reflect a personal element of San Francisco; they are explicitly supposed to be “a direct reflection of the life of the city and its residents, workers, and visitors.” With symbolically mysterious waves, or the early footage of traffic or pedestrians, such connections are sometimes surprisingly elusive even as they’re literal local references. Campbell recognizes the power of his chosen images on the city’s tallest building, “a single kind of focal point,” and Day for Night bestows its visual message one-sidedly, effectively informing viewers “this is for and about you.” (Currently, anyway — such a podium has enormous possibility and forever is a long time for an installation.)

Campbell is aware that he’s established a particular relationship between sited art, scale, and audience. He notes: “You can’t even see Day for Night from the immediate surroundings. The skyline is the context.” There’s a lofty aim implied here: to unite San Francisco with a virtual public space, bringing people together in a shared experience and anchoring downtown abstractly, just as the transit center is designed to anchor it concretely. Day for Night is speaking a visual language that we recognize without meaning to, or recognize in part — a shared dream of distinguishable image, but obscure meaning. We as viewers can guess or research the contours of the dream, imagining the daytime waves at night are from Ocean Beach, for example, or reading that the silhouetted dancers were filmed locally, at the Alonzo King LINES Ballet Company’s studio. Yet the specificity of sites fades in importance when presented as a nightly sequence. “It’s meant to capture the rhythms and patterns of San Francisco along with the cycles of the sun and moon and other rituals,” Campbell has said. This ambition, then, is public indeed; in talking about the ballet dancers, it’s as if we were talking about the weather. 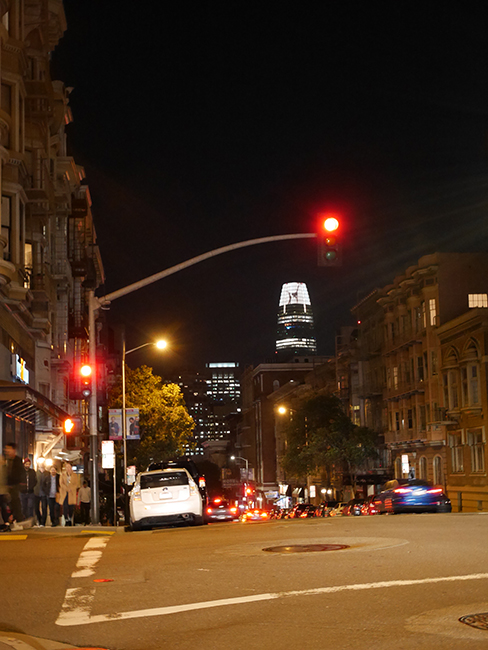 Weather, however, is not selected for us. The fusion of the monumental and the personal does not allow Day for Night to become seamlessly ambient, or seamlessly public.

The Tower’s art is a public focal point, but the public working inside that building will not necessarily see it. Instead, it’s defining individual experiences of the city for twenty miles out. Driving on 280, for example, caught up in the waves, your own motion meets a visual representation of motion as you encounter an image of “San Francisco” that’s been chosen for you. In viewing these videos, we become what Kwon calls an “invented community,” especially since Day for Night intends to feed us back a bit of ourselves and the city. The most dystopian counterpart to the unifying ideal of the artwork is the way it rescales and redefines our largest building as a surface for a light show — you were in one place, a car or a street, but now it’s dusk and you’re also a viewer, as this workplace for thousands flattens the skyline into another screen.

After seeing a test of the work, one spectator noted that it reflects the “ephemeral nature of place.” Given that the work is located on a very specific, very recognizable building, the art is tied to its physical environment even as it is projected outward. But as the virtual shared space of Day for Night settles into the background, its ambitious scale and reach outrun its goals of creating a sense of place. Day for Night simplifies, and in this simplicity San Francisco feels reduced.