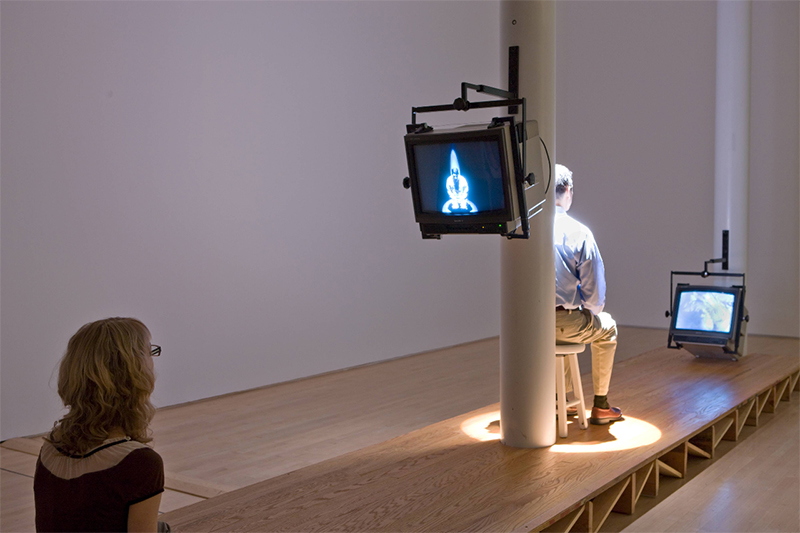 In the late 1960s, poet Vito Acconci began exploring single-channel stationary video works within the context of conceptual performance, taking a psychologically vivid, self-reflexive approach. Command Performance (1974) follows a series in which the artist speaks to an off-screen actor; with varying degrees of dominance, Acconci provides instructions, demands, and feedback. 1

Using the camera to execute a mise en abyme effect, he addresses the act of performing while displacing it onto another, unseen body.

Here, the camera surveys a reclining Acconci from above as he directs an imaginary actor through a type of forced striptease, shifting about halfway from female to male pronouns and physiology. Coaxing the actor to “step into the spotlight,” Acconci constructs his proxy’s relationship to the audience: “that’s what I want you to do.” If played right, this relationship has the potential to take on a life of its own, with the actor paradoxically achieving a desirability and success beyond that of their creator.

By turns erotic, personal, perverse, and pathetic, Acconci acknowledges his own failings as a performer and artist, clinging almost desperately to the fantasy of the actor he has built in order to “dream [himself] out of here.” His directions get increasingly frantic and desperate; the fantasy must continue. In the second half of the nearly hour-long monologue, Acconci shifts from being the controller to being acted upon, regretfully accepting the autonomy of the apprentice performer onto whom he has now projected all the qualities he acknowledges as lacking himself. The result is a seductive Frankenstein: “This is what I formed you for, to be bigger than I could be.” His narrative is the ultimate Pygmalion story — the “star is born” of old Hollywood — uncomfortably inserted in the context of 1970s video art.

During the decade prior to Command Performance, Acconci had witnessed artists in both dance and music questioning ideologies and forms within the performing arts. His decision to turn on the camera in his studio suggests an acute self-awareness that in turn bred anxieties around the act of performing. Instead of pushing the boundaries of media in response to defining what performance can be, Acconci asks what it means to perform, what it means to be on display. “There will be mountains, sunsets,” he muses towards the end of the video, manically humming himself into a forced reverie.

Command Performance seems to draw on West Coast artistic heritages: Hollywood, the Beat poet generation of the San Francisco Bay area, the video work of California-based artists including Bruce Nauman, John Baldessari, and the self-reflective documentary work of Bas Jan Ader (who moved to Los Angeles from Amsterdam in 1964). Eschewing live performance for a mediated (and psychologically disturbing) address, Acconci identifies verbal communication as the modality of his own expression; his seemingly angst-ridden, absurdist experiments with the camera are acutely self-aware probings into the very act of performance. As a visual document, Command Performance fails: the filmed artist obtains none of his dreamed phantasm. And when the video abruptly ends, it is as if — with bored impatience — the audience has simply walked away.