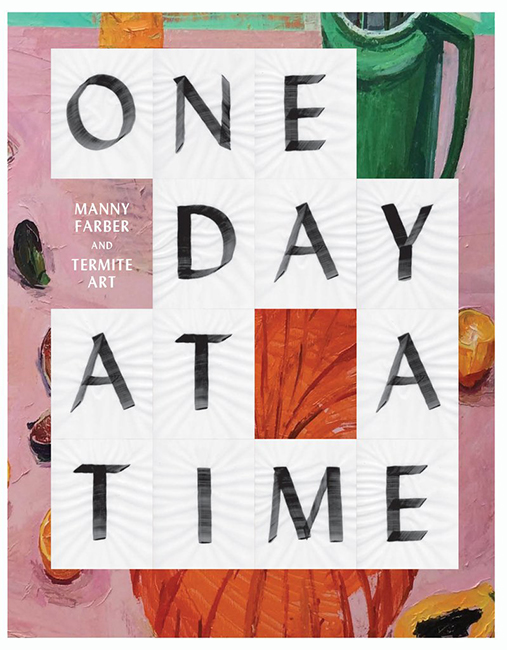 Cover of the exhibit catalogue for One Day at a Time.

One Day at a Time: Manny Farber and Termite Art, Helen Molesworth’s final show as chief curator of the Museum of Contemporary Art in Los Angeles, closed last week. Still, over a month after I first saw the show, the work that Molesworth gathered in the museum and the show’s companion book continues to occupy my mind. I returned to MOCA twice to walk through the museums rooms, transfixed by Manny Farber’s cinematic still life paintings; Beverly Buchanan’s obsessive reiteration of miniature sharecropper cabins; Becky Suss’s stately home interiors; Lorna Simpson’s attentive yet fractured video explorations of the most mundane activities of life management; Roni Horn’s running photographic record of gifts friends have given her; and the work of myriad other artists. While much of the work in that show lacked a consistent through line in terms of formal approaches or political concerns, there seemed to exist between all of those works a shared ethos towards not just art-making, but art-making as praxis for a certain kind of engagement with the environments that the artists found themselves in.

I think it was the contagious effect this engagement produced that I was most drawn to. The art that Molesworth had gathered in those rooms filled the museum with an almost religious charge, a palpable faith in what art can yield when angled toward the minute description of quotidian details and rhythms. Molesworth’s artists are mostly uninterested in making grand statements, reveling instead in methods that embrace duration, movement, and the virtues of a reverent attention to the particular and the quotidian.

I was drawn to one work especially. Farber’s Rohmer’s Knee is a playful little painting that unfolds across a recurring set of circles: the canvas itself is cut in the shape of a circle, and Farber replicates that shape within the canvas itself, in the form of a model train set placed at the painting’s center, inside of which we espy a note: “What’s wrong with off the top of the head?” Alternating between black and blue panels that are punctuated by a shock of white and the model train set’s green interior, the painting is a chaotic landscape. Miniature nude women shimmying in or out of dresses as rulers balance precariously upon cheese wedges and magazines are tossed open to the viewer’s gaze. The train set at the composition’s center lends a centrifugal energy to the composition — it’s hard not to imagine a toy train chugging around and around the tracks, and every time I encountered the work, I found my eyes imitating the route of Farber’s phantom train, moving around and around is circular composition. As my eyes roved deliberately, I became familiar with some of the motifs Farber returned to over the course of his painting career in California, including but not limited to Westerns, cowboys, the female nude, candy, fruit and vegetables, stationary supplies, and film.

The painting’s title is an in-joke. Farber was a fan of Eric Rohmer’s 1970 film Claire’s Knee, which tells the story of a man’s bizarre attempt to touch a teenage girl’s knee before he embarks upon marriage. Is Farber drawing a comparison here? Is the painting suggesting that, just as the protagonist of Rohmer’s film attempts an inappropriate form of intimacy with the young Claire, we are being drawn into a too-close intimacy with Farber himself — with his obsessions, his ideas, his most visceral desires? I’m not sure, but I do know that the canvas created a kind of obsession in me, a doggedly attentive interest in a composition that eschews claims in favor of a map of Farber’s mind. By the third time I had seen the painting, I felt as if Farber was teaching me how to look, with care and curiosity. 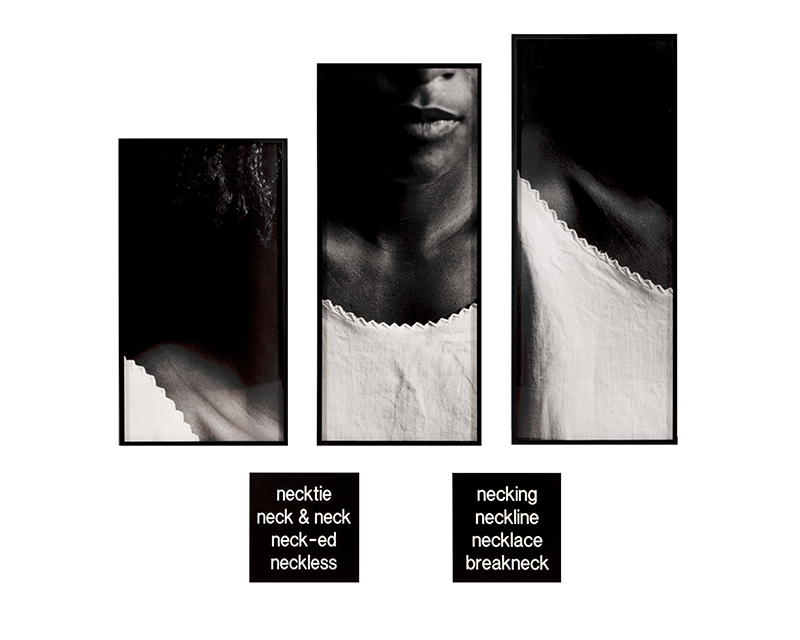 This is probably something Farber intended. In “White Elephant Art vs. Termite Art,” the 1963 Film Critic essay from which One Day at a Time takes its subtitle, Farber — a renowned film critic and prose stylist who was also an accomplished painter employed as an art professor at the University of California, San Diego — excoriated what he saw as the staid lethargy of “masterpiece art.” In his mind, masterpiece art sacrificed an artist’s impulse to grapple with the particular to the demands of overarching patterns and theories of the world. This art’s three original sins were to “frame the action with an all-over pattern […] install every event, character, situation in a frieze of continuities […] [and] treat every inch of the screen and film as a potential area for prize-worthy creativity,” and if we’re to take that list at face value, Farber’s chief problem with masterpiece art is that it is an art which has, in its effort to attain timelessness, has embraced the rigidity of a beautiful corpse: it doesn’t move, but rather poses stiffly in a bid for our admiration. Such an art is condescending and undemanding because it “[boxes] in an action with a noble idea or camera effect picked up from High Art.” Whatever life might inhere in the work of art asphyxiates under the pressure of technique, composition, and the enervating drain of big ideas. One might say the same for the critical eye of any audience exposed to such art.

By contrast, “termite art” insists on a sense of compulsive movement, and is always squirming out of fixed composition. An artwork in this mode ends up being “an ambulatory creation which is both an act of observing and being in the world, a journeying in which the artist seems to be ingesting both the material of his art and the outside world through a horizontal coverage.” Termite art doesn’t want to settle for merely representing the world through a hierarchical sense of composition that subjugates detail to the needs of whatever ideas an artwork is meant to convey. Instead, termite art allows itself to sprawl in the form of a rhizomatic network in which obsessions, details, ideas, images, and colors grasp and release one another to form a shifting landscape in which thought can take place. Like a bug in its environment, artists interested in termite tendencies simply set themselves down within the world and and observe what confluences might arise when one pays close attention.

As Molesworth says in a touching essay on her intellectual obsession with Farber’s method, “One Day at a Time,” Farber cultivated a critical sense that prized astute attention to detail over totalizing narratives, one which asks us what becomes possible when we linger over seemingly trivial minutiae within the world rather than burying them beneath the stultifying order of master narratives. His paintings enact that critical sense, giving us expansive fields in which we are blessedly prevented from seeking out claims or big ideas. We only have to look on attentively, describing what we see. Farber continues to teach us from beyond the grave.

I’m struck by how Farber’s ideas dovetail with a rash of literary critical methods that have broken out over the last twenty years, methods we can loosely group under the banner of “postcritique.” Wrestling with a cultural field in which the political benefits of cultural critique are no longer self-evident, and yet in which criticism itself is too often weaponized in service of a paranoid political orientation, scholars have posited various solutions: Eve Sedgwick’s reparative reading, Stephen Best and Sharon Marcus’s surface reading (and their later dive into the question of “description” as opposed to critique), D.A. Miller’s too-close reading, and the ever amorphous field of affect studies are just a few examples. All of these methods bear at their heart exhaustion with critique as the primary mode of engagement with cultural objects, and seek to recuperate a more aesthetically grounded approach to thinking about art.

To make an example of a film that I adore: rather than running art through a theory that tells us how, say, Sofia Coppola’s unsettling and complex The Beguiled, a 2017 Civil War drama, is fundamentally flawed due to a lack of Black characters in its Southern plantation setting, a method like reparative reading might ask us to attune ourselves to why we find pleasure in the film — what about its performances draws my attention, and what paying attention to my pleasure might yield in the way critical insight. Such methods ask us to return to the pleasure of keen attention to detail rather than the totalizing theoretical narratives that theory would impose upon us.

Manny Farber’s paintings remind me that art itself can be a site where our sclerotic critical approaches to thinking about aesthetics can be unsettled. All the ways we are accustomed to thinking about art these days — as a mere reflection of our world, or a product of poisonous socio-political and economic forces, or a blueprint for liberatory political action and utopian societies, or anything other than a fundamentally aesthetic phenomenon, with all the fascinating messiness that entails — come up short in the face of Farber’s essayistic canvases. They point out the need to refine and deepen the ways in which we engage with art.