Series Etel Adnan: Poetic Landscapes
Etel Adnan: Poetic Landscapes
Series
Organized by The Editors
On September 20, 2018, SFMOMA hosted “A Ballad for Etel Adnan,” an evening of poetry and music in conjunction with the exhibition New Work: Etel Adnan. Harpist and composer Zeena Parkins and percussionist William Winant performed, and David Buuck, Nick Hoff, and Denise Newman read their own poems along with some of Adnan’s writings. Born in Beiruit, Lebanon, in 1925, Adnan is a visual artist, poet, and essayist with deep ties to the Bay Area, where she lived for more than fifty years. New Work: Etel Adnan, which closed January 6, 2019, honored this relationship; the show, which included new paintings and tapestries, marked SFMOMA’s first presentation of the artist’s work, and coincided with the acquisition of two paintings by Adnan for the museum’s new Contemporary Art collection. Here, we offer three new and in-progress poems from “A Ballad for Etel Adnan.”

Four poems from The Redesignation of Paradise 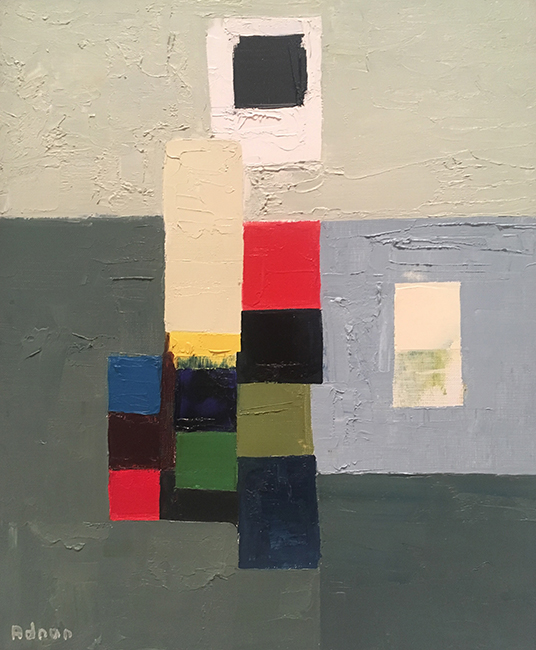 Keep looking until you forget what you know about cows, in other words, unhook meaning from definition like unhooking a bodice. You rub your breasts in relief and it’s taken as a sign — let’s play! — and we get down on the floor to write a poem together:

a cow is to kowtowing

what a yak is to yakking

Is there time for poems in the redesignated Paradise? Poets in the backs of back rooms keeping language from getting stodgy. When you recognize without recognition you ease up like the boss who after two drinks joins the others singing the “Happy Birthday” song, laughing and swallowing cake with one mouth organ developed eons ago in the same order in different wombs around the world. Lamp and light, the many poets compelled to write despite the beating rain of capital.

A tortoise redesignated as a pet breaks out of its pen heads for the laptop charger, spends the night humping an approximation of its kind, like the man on the subway chomping on gum, firing off at paint spots on his smart phone. Put the world together by thought — it goes on for a bit then turns to shit.

Go ahead use the toilet — others have — though it’s broken.

Oak trees redesignated as a street name are spoken of many times a day like trusting the life of dormant seeds. Jiggle the lever, the judge is deaf so we have to shout; when he speaks it’s clear he hasn’t heard us. That’s okay, we’ll clean it up with our robot arms. Coming down the mountain justice melt.

As though it ends with death when it never ends.

Has it always been so?

Before orders coming down from mountaintops, laws as now, before a mind-spawned reality. Before war and tribunals, waste of every form, there was no outside to put a gate against and so there was no paradise, no time or stories to tell. Before stories (propriety) there was no conflict and it was what we might call boring.