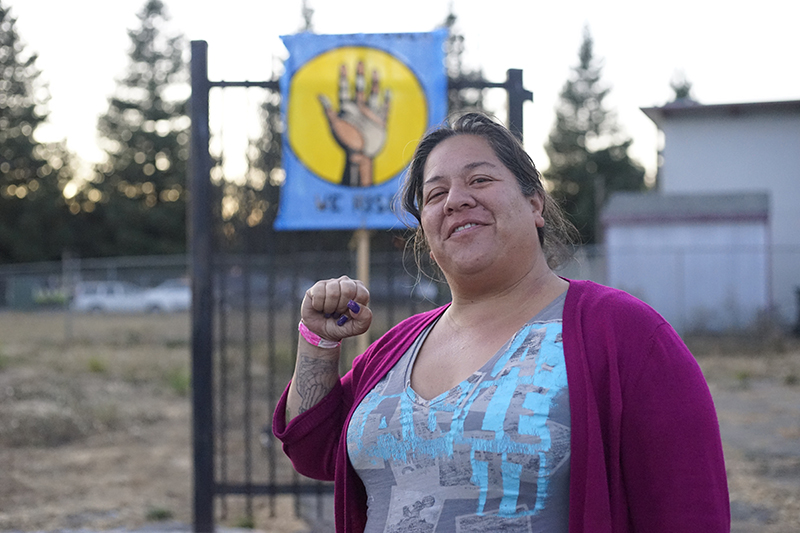 For the next month, I’ll be doing audio interviews with mothers who are artists, asking them for their definition of love, and how that definition is exemplified in their relationships with their family, as well as how they show that love through their work and in the community. This is the third entry.
—PH

Last Saturday night I was sitting in an encampment in the flatlands of Deep East Oakland, talking about the power of love and the presence of God.

I was with Needa Bee — a mother, chef, educator, and organizer who works to provide resources for unsheltered people in Oakland, which she’s been doing for years. She was one of the driving forces behind The Village, a makeshift community for unsheltered people built on City property that made headlines in February of 2017, and has also been heavily involved with the 23rd Avenue Village, which recently caught on fire.

Needa told me that just two weeks ago, she — along with Candice Elder (the head of The East Oakland Collective) and a handful of volunteers — worked to set up temporary housing on a plot of vacant City-owned land on the corner of Edes Avenue and Elmhurst Avenue in Deep East Oakland; this would come to be known as the Housing and Dignity Village.

The work Needa & co. are doing is utterly important. An East Bay Express article from January of this year noted that around 2,700 people are living on the streets in Oakland, a disproportionate amount (68%) of them being African American. Just weeks ago, a United Nations representative reported that the conditions that unhoused people in the Bay Area are living in, “constitutes cruel and inhuman treatment and is a violation of multiple human rights, including the rights to life, housing, health and water and sanitation.”

Some people shake their heads at the situation; others turn their heads away from it in an attempt to not acknowledge it. And then there are people like Needa Bee who dive head-first into the work. 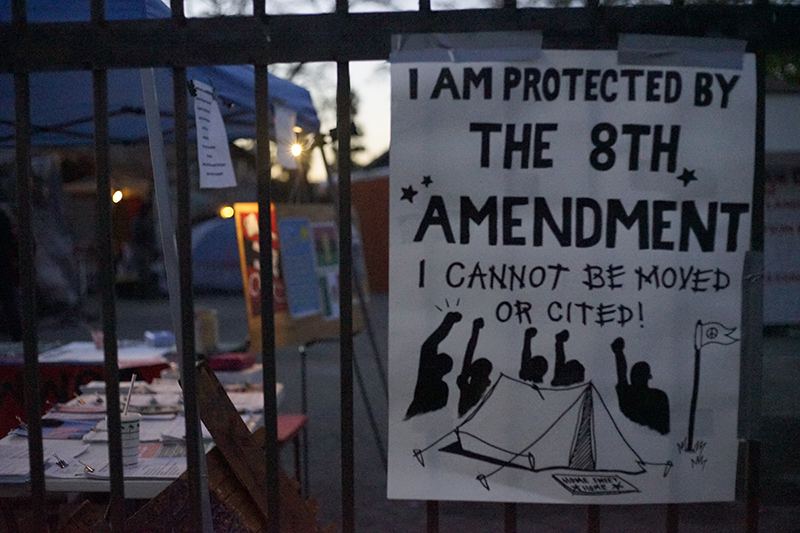 A sign on the gate at The Village in Deep East Oakland.

It takes a certain kind of love to do this work.

When I asked Needa Bee for her definition of love, she told me, “Love is like the essence. If there is a God, it is the essence of God.” She continued by rattling off attributes of love: “Selfless, giving without wanting to receive something in return, care-taking, nurturing, foundational, divine, healing.” It’s these attributes Needa Bee exemplifies through her work in the community.

Of course, our conversation went further than just a definition of love and how it relates to the community. We touched on lessons learned from romantic relationships; she was brought to tears while discussing the interactions she had with her parents while growing up; and she smiled while declaring that her daughter was a part of God’s plan.

During the convo about relationships, Needa brought up a Nina Simone quote: “You have to learn to get up from the table when love is no longer being served.” And talking about community love, Needa quoted Che Guevara: “At the risk of seeming ridiculous, let me say that the true revolutionary is guided by a great feeling of love.”

In the end, it was a quote from Needa herself — something she told me before we were even recording — that rattled in my head: “East Oakland is the last frontier of the Oakland we know and love. So this is an effort to hold some ground.”

During a follow-up conversation, Needa told me that the Village in Deep East Oakland was recently served an eviction notice, so this weekend she’s looking to get as much support as possible in holding onto that land.

She’s asking people to show up to The Village from 10 a.m.–1 p.m. on Saturday, November 10 in solidarity with the Village. To find out more about that day of action and to get more information on Needa and her work, follow The Village’s Facebook page.

To hear my full conversation with Needa Bee, I invite you to listen below.