What is a River? Three Visions of the Rio Grande 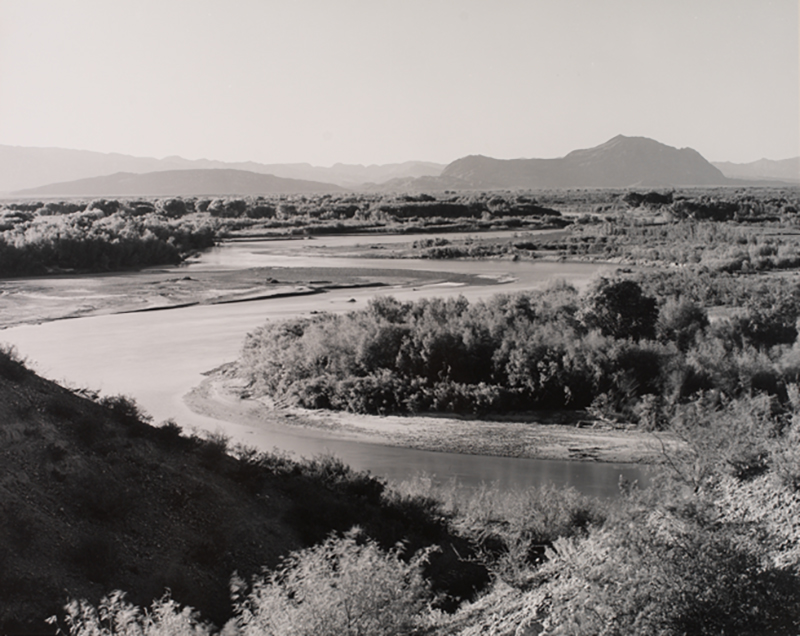 I first laid eyes on the Rio Grande through the steel fence that divides the river from downtown Brownsville, Texas. Pushing my elbow through tall, spiked posts, I thought about how the sandstone downtown would have felt before the wall was built: splaying to the shore of the river, Matamoros picking up on the other side, the two cities like friends waving to one another.

This is not true. It was not the first time.

I had hiked alongside the Rio Grande in Colorado and in New Mexico, watered cows with its water, eaten potatoes and garlic grown by it. Yet that seemed an entirely different river. The Rio Grande has been broken up, divided, re-cast as a barrier.

In 1949, the photographer Laura Gilpin published The Rio Grande: River of Destiny, a photobook she calls “the portrait of a river.” And what is a river? To her, “a magic, moving, living part of the very earth itself.” Beginning in 1945, Gilpin traveled the Rio Grande’s length three times, following the people and landscape from its headwaters at timberline in Colorado’s San Juan mountains, through the adobe towns of New Mexico, past cacti and cowboys on the plains, to the bridges and palms of its Texas mouth. Experiencing the Rio Grande at its dynamic, surprising ground level, a reader can see the momentum the river animated in Gilpin herself, and her longing to follow along its course. At times the waters appear unpredictable, at others placid; in some photographs briskly on their way to a new place, in others resting beside the traces of human neighbors.

As Gilpin’s narrative approaches the lower Rio Grande Valley, change looms. In 1944, she explains, the United States and Mexican governments ratified an International Boundary and Water Commission (IBWC) treaty regarding the distribution of the waters that form their shared border. The first step was to be the construction of Falcon Dam near Roma, Texas.

“This reservoir will impound more than three million acre-feet of water — water which now at flood season rushes down the river to the gulf,” she writes. “The retention of this great amount of water will insure all present irrigation needs and allow for the addition of new farm areas.” Above the text, she shows the river floating sleepily past the Mexican town of Guerrero, condemned to inundation. By 1954, Falcon Dam was constructed, at the cost of two towns and the lives of multiple workers. 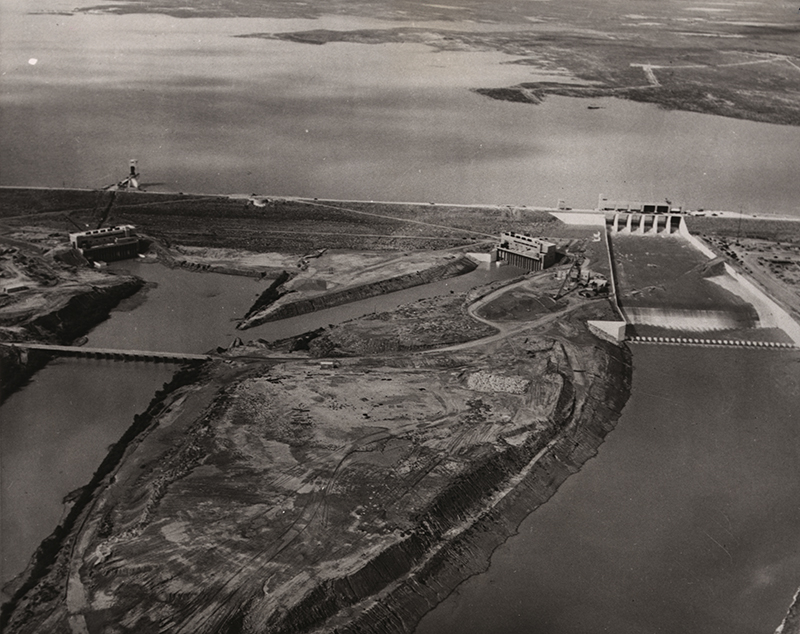 Unknown, Airview of new dam, 1953. Falcon Dam on the Rio Grande, with hydroelectric plants on both the US side and the Mexican side. Source: Library of Congress.

The large dams of the twentieth century — over 50,000 constructed worldwide — transformed water and rivers, along with our relationship to them. It wasn’t just the behemoth dams themselves that reconfigured the landscape, but also the way they were administered. Geographer Christopher Sneddon writes in Concrete Revolution that, starting with the 1933 creation of the Tennessee Valley Authority, US water development was underpinned by a new unit of management: the river basin. Instead of moving, living things connected from headwaters to mouth, rivers managed at the basin level became conduits for catchment and irrigation storage, their flow divided into segments considered and manipulated in isolation from one another.

The IBWC, like other agencies, focused on the basin, its irrigative potential, and a modernist, technological solution to a perceived inefficiency. In turn, the agency’s images reveal the era’s new understanding of the scale and function of rivers. The IBWC’s Rio Grande dams came with an additional effect. By making vast reservoirs out of muddy shallows once easily crossed on foot, they turned the river into a physical border. 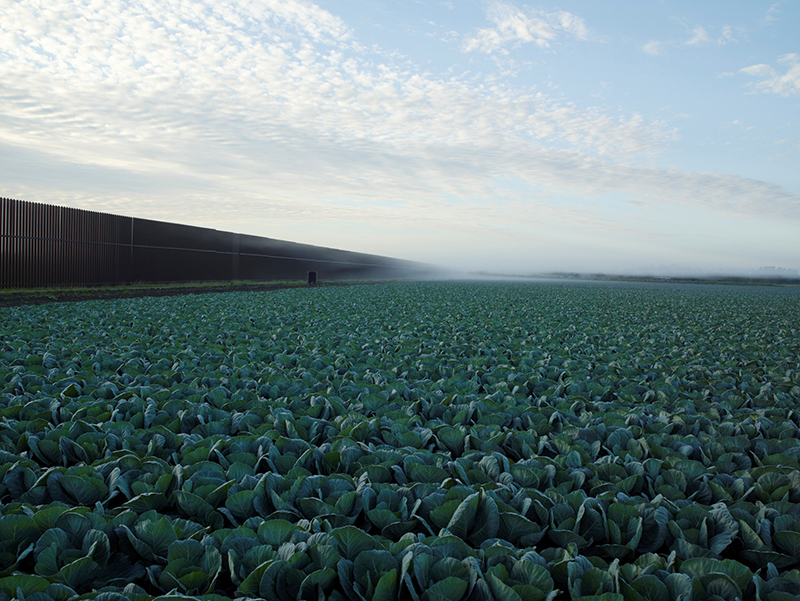 In Border Cantos, photographer Robert Misrach travels along the US-Mexico boundary, capturing the border wall, its gaps, and its surrounding terrain. He approaches the Rio Grande Valley from a different vector than either Gilpin’s meandering or the IBWC’s segmented, aerial vision. For Misrach, the Rio Grande is a signifier: a static, self-evident indication of the boundary line. Yet like the idea of the basin and irrigation district, the seemingly natural formation of the river as boundary became possible only through managing it as such.

One of Misrach’s photographs shows a cabbage field near Brownsville that abuts the steel wall. We can see that the irrigation of the IBWC’s promises has come to pass, and flourished, while the river that Gilpin knew has become barricaded and obscured. Still, it is there, somewhere in the mist collected at the image’s vanishing point. With a mind turned to overlay, in Misrach’s image we can view all three ontologies of the Rio Grande simultaneously: the border; the irrigation district; the magic, moving entity. But we can only do so because we have seen otherwise: we have seen the river as it once was perceived.

In a 1988 review in Aperture, the photographer Robert Adams responded to the common criticism that Laura Gilpin only photographed people and the land at their best. He once sympathized with the criticism, he wrote, feeling that photographs needed to reflect the “torn world.” Then he reconsidered. “Is there anything wrong with picturing the ideal without acknowledging the disturbed surface? […] At a time when we have to live by hope […] some art can allow us briefly to escape that surface so that we recover a memory or an intuition that is affirmable.”

By denaturalizing the boundaries and walls to which we have become inured, by making it possible to see a river as a river, her photographs enable us to see wholeness — the memory or intuition of it, as Adams puts it. By the same token, they enable us to see wholeness beyond the river: in the borderlands, in the continent — larger scales no less divided, broken, or torn.