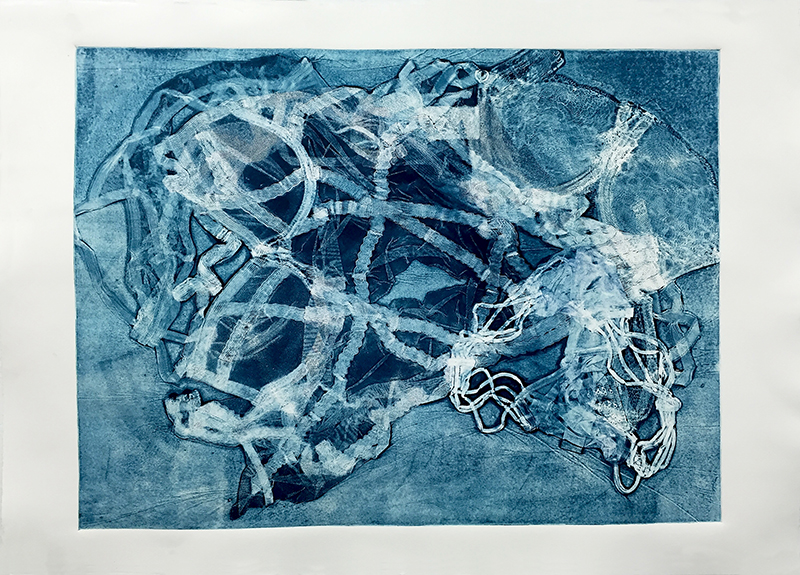 A couple years ago The Third Thing, my messy feminist performance art duo with poet Ivy Johnson, was invited to play “poetry whores” at The Poetry Brothel. The Brothel was founded in New York City in 2008 by Stephanie Berger and Nicholas Adamski, though a number of commenters on a 2014 feature in The Guardian claim the concept was stolen from two men, Jimmy McGee and Chris Parkinson, who’d developed it for the Brighton Fringe Festival in 2007.

Whoever thought of it first, the idea is pretty straightforward: overseen by a “Madame,” poets dressed as nineteenth-century prostitutes set up shop in a temporary venue, enticing visitors, aka johns, to purchase private readings via previously bought tokens. Berger describes The Poetry Brothel as an alternative to the poetry scene she encountered in NYC. On the one hand: “forcibly kind of stale and boring — you know, they use halogen lighting and fold up chairs and podiums, and you sit with your hands kind of crossed in your lap,” or, on the other, slam poetry whose “competition element felt kind of antithetical to our ideas about poetry.” I’m sympathetic. I can attest to the painful tedium of many readings, and I’ve never been enticed by the competition of slam poetry, either.

Nonetheless, The Third Thing declined the invitation. We couldn’t get past how the concept minimized the lives of actual sex workers, distorting their labor with a sexy, ahistorical sheen.

Then, this spring, Ivy was solicited again to perform by a newly appointed West Coast Madame. The event was coming to the Bay Area on the heels of recent legislation affecting the lives and livelihoods of sex workers across the country. A combination of two separate bills, The Stop Enabling Sex Traffickers Act of 2017 (SESTA) and the Fight Online Sex Trafficking Act (FOSTA), was passed in early 2018. As The Daily Dot puts it, “SESTA-FOSTA rolls back portions of Section 230 of the Communications Decency Act (CDA), a twenty-year-old law that protects online publishers from the things their users say or do. The new bill holds website owners legally liable for criminal prosecution for any sex trafficking discussions that are viewable on their platform.” In the wake of this legislation, sex workers have been forced off websites where they shared safety information, vetted clients, and controlled their businesses. Though marketed to the public as a way to combat human trafficking, SESTA-FOSTA, in effect, makes the lives of consensual sex workers more dangerous and precarious.

All the Bay Area poets I know roundly rejected the Madame’s invitation to perform. Ivy and I had not been swayed, either, but our curiosity was burning: How did people actually engage in this performance? Was it as offensive as it sounded? In response to the Madame’s somewhat aggressive pleas for her to reconsider, Ivy procured comp tickets.

Upon arrival we were greeted exuberantly by the Madame herself. We ordered drinks, stirring them as we eyed our surroundings, an art deco-ish bar replete with velvet curtains and a stage. The performers (including an aerialist, a Balkan jazz trio, and a burlesque dancer, all quite skilled) and attendees seemed to thoroughly enjoy themselves: poetry whores reveling in the transgression of taking on personas, audience tickled by these “naughty” disguises and affects. 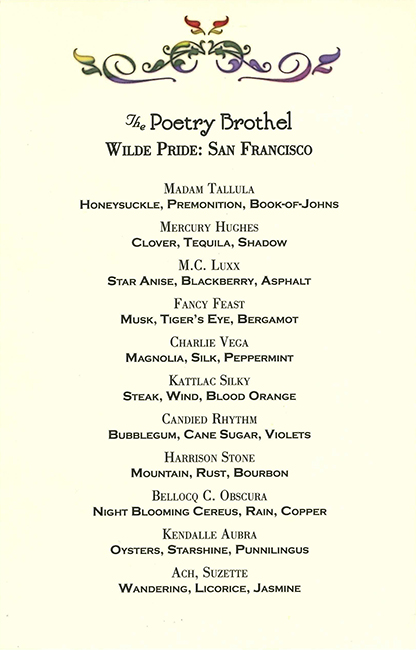 The “menu” distributed at The Poetry Brothel’s Bay Area iteration.

Our suspicions were quickly confirmed: we were in the midst of a play-acting diversion lacking the social, political, or material consequences of the work appropriated. Though we received promises from the Madame that the evening would include a display of “left” politics and performances working to “destigmatize sex work” we witnessed no such display. The Madame, the night’s emcee, and the poetry whores offered plenty of jokey banter and romantic verse, but no political framing whatsoever. We were left to wonder what she meant by “left” and “destigmatizing.”

Let’s pretend for a moment that putting on a show wherein people who may or may not have any direct experience with sex work put on costumes and read poetry while inhabiting the reductive stereotype of “whore” does anything to destigmatize actual sex work: conspicuously absent was any mention of the day-to-day lives of sex workers. Most glaringly, not one of the dozen or so people who took to the mic mentioned SESTA-FOSTA. One wonders if they were even aware.

Upon reflection afterward I remembered The Sex Workers Art Show. Curated by Annie Oakley, the variety show toured from 1998 to 2009, highlighting sex workers as performers. Before I attended one of these shows as a young punk in Olympia, WA, circa 2004, I had never considered that people in my community — friends of mine or artists I admired — might be making a living from sex work. Their unabashed performances utterly reoriented my conception of a sex worker.

In 2017, SOMArts mounted We’re Still Working: The Art of Sex Work, a mixed media show featuring twenty-three sex worker artists. In their framing of the exhibit, curators Maxine Holloway and Javier Luis Hurtado state, “We are not outsiders examining the sex worker community, but insiders with art to share. We strongly believe that placing sex workers at the center of our own narrative is one of the best ways to fight for sex worker justice.” Their words echo the experience I had years ago, and offer a tangible path toward the destigmatization The Poetry Brothel’s West Coast Madame purports to value.

I can think of several easy ways to incorporate and support these voices: What if some of the performers and poets were vocal about being sex workers themselves? Hell, what if they just set up donation boxes and directed their audience to give? (According to The Madame, the Brothel donates part of its proceeds to Sex Workers Outreach Project, but there was no mention of this at the event itself; I learned of it while writing this, months later).

I support The Poetry Brothel’s desire to actually pay poets for their work — this is a consistently underpaid field, when it pays at all. Yet the concept at its heart remains toxic. Perhaps tellingly, it seems the poetry whores’ wages depend entirely upon the number of johns who purchase readings from them. In this lies their true similarity with sex workers: no security or guarantee of income for their labor.