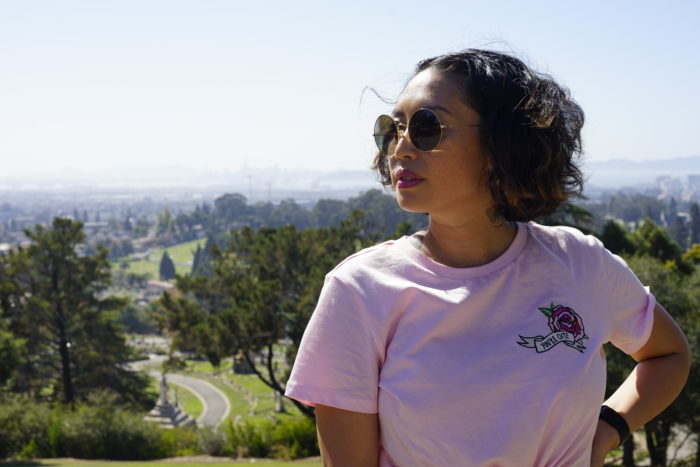 For the next few months, I’ll be doing audio interviews with mothers who are artists, asking them for their definition of love, and how that definition is exemplified in their relationships with their family, as well as how they show that love through their work and in the community. This is the second entry.
—PH

As a maintenance truck rolled by, emcee and educator Rocky Rivera and I sat in a parked car at the top of the big hill in the back of Oakland’s Mountain View Cemetery. In front of us lay the buried remains of so many lost ones. In the distance we could see Oakland’s landscape, downtown high-rises protruding from the concrete. Even further, on the opposite side of the Bay’s water, we could see San Francisco, the newly-constructed Salesforce Tower dominating the skyline. These two major cities are anchors to a region that is undoubtedly booming with growth that hasn’t been seen since World War II or the Gold Rush. But Rocky Rivera and I are both local kids who can’t help but see this growth or “rebirth” — as some might call it — like the death of what we once knew as home.

Rocky Rivera and I were set to discuss her definition of love and how she applies it to those closest to her, as well as through her art. Before I hit record on the microphone, small talk led to a discussion about some of the lived experiences that have contributed to the content in her new album, Rocky’s Revenge, which drops October 16. A couple minutes later we were talking about the shortcoming of the school system and what it means to be a part of the “sandwich generation” — the age group that has to take care of their parents as well as their offspring.

In a matter of moments, the conversation had covered expansive territory, but that’s Rocky Rivera. I used to work in education with her, and I’ve come to know that a conversation with her is going to traverse a lot of ground, and has a high possibility of including a reference to bell hooks, Khalil Gibran, and/or Tupac Shakur. Hell, there might even a note about astrology, something about Bay Area neighborhood history, or how global imperialism relates to local oppression.

Once the mic was rolling, we continued to cover myriad topics, but the one that stuck with me was about how looking at your own kid(s) can be “an exercise in narcissism.” She described it as a practice in which you have to see the child as an individual; someone who came from you and might even look like you — but who is not you.

“Exercise in narcissism”: a term I had never heard before. After some research, I saw that while it wasn’t new, it wasn’t readily used in the context of love. 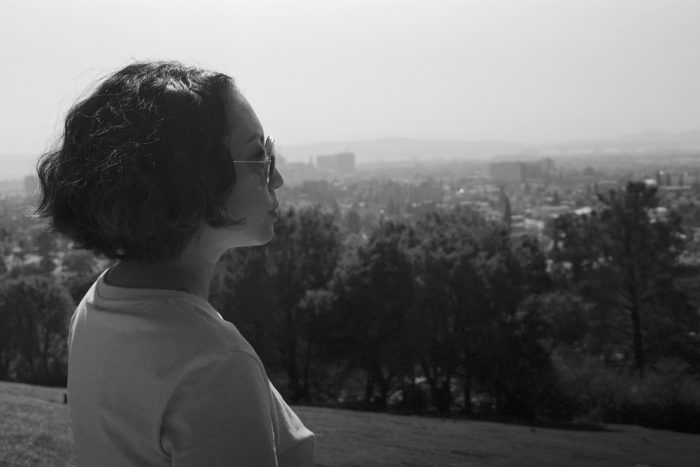 “I know I love something when I’m scared to lose it,” Rivera told me when I asked her to define love. Fitting, given the location of our discussion, surrounded by departed loved ones, overlooking cities where longstanding cultures are being traded for quick capital at an alarming rate.

We’ve had friends and family forced to relocate, we’ve had students struggle to find sufficient housing, and we’ve both experienced the grip of the housing crisis on a personal level. So when she told me her definition of love — something that means so much that you’re scared to lose it — I definitely wanted to hear how that related to her parents, her partner, and her children, but was even more eager to hear how that related to her community, and how she expresses that love through her art.

Rocky Rivera, a.k.a. Krishtine De Leon, is a mother of two, a wife, and an artist who was born in the Philippines and raised in the Bay. She’s a college graduate, former journalist, and emcee whose aforementioned Rocky’s Revenge is her third studio album. This project is a bit different than others, as Rivera recorded the album with engineers from Women’s Audio Mission, an organization that advocates for women to get into audio-related industries by providing hands-on experience. The songs on the album cover politics, personal history, and relationships — both romantic and platonic, like “Brother Like You,” in which she discusses her camaraderie with the Jacka, a well-known rap artist who was killed in 2015. While the songs on the album have different flavors, rhyme patterns, and varying feels, every track is another aspect of Rivera’s heart and mind placed over a beat.

And on that same note, that’s how our conversation transpired: open heart and mind, placed over a beat.

To hear the full conversation, I invite you to listen below.