The Absolute Denial of 💩 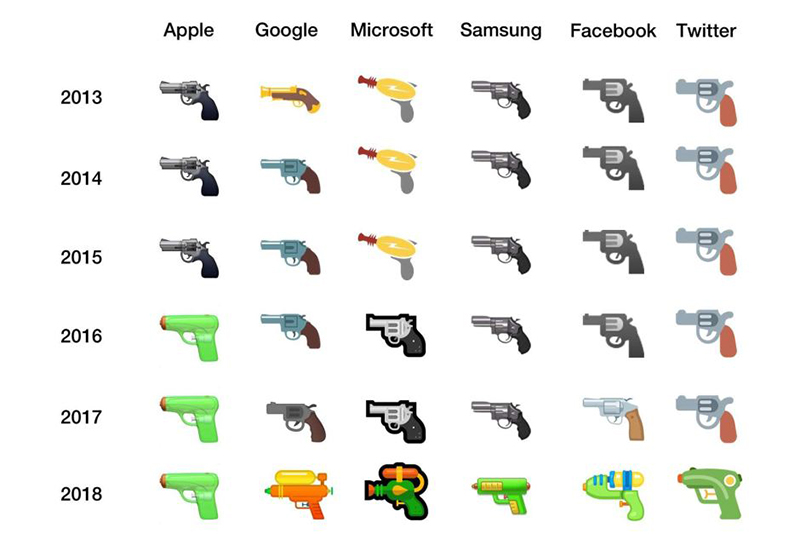 Today emoji are used by 92% of the world’s online population. The diminutive images have inspired a holiday and a $50 million animated movie. You can even make a living translating them.

The Emojicon convention draws attendees from around the world. Topics of discussion at the 2018 gathering in Brooklyn include: “How Emoji Are Changing Our Brains,” “Emoji as Public Awareness,” and “Emoji & the Law.” That the convention seeks to address such serious topics is a testament to the degree to which emoji have penetrated everyday discourse. Such ubiquity should not go unexamined: how did we get emoji, and who decides how they are represented on our phones and social media platforms?

In 1982 Scott Fahlman, a computer scientist at Carnegie Mellon University, gave us the first emoticons, pareidolic text-based representations of faces such as :-) and :-(. Over the next twenty years these emoticons developed into glyphic emoji, first appearing on Japanese cell phones in 1999. Emoji use exploded in 2010 when they were codified into Unicode, and thus standardized across major platforms such as Google (Android), Facebook, and Apple. The Unicode Standard seeks to assign a unique number to every possible character from any language, no matter what device, platform, or application, allowing data to be reliably transferred between applications and devices without corruption.

But who determines what gets codified into an emoji? Why do we have an emoji for a smiling pile of poop but not one for a frowning pile of poop? The group that governs emoji is the non-profit Unicode Consortium; it costs $18,000 per year to have a vote in the Consortium (or $7,500 for a half vote), which is incorporated in California and has been updating the Unicode Standard on a yearly basis since 2002. Voting members include software giants like Apple, Facebook, Google, and Microsoft, along with the governments of Oman, Bangladesh, and India. Tellingly, it would seem that corporations act as the stand-ins for certain nation-states not represented within the Consortium.

That a group originally meant to create reliable bridges between languages is now charged with codifying all of human emotion is a situation of pandoric consequences. According to Wired, Unicode adds new emoji at thirty-five times the rate of new words added to the Oxford English Dictionary. Yet the Consortium’s voting members are largely sourced from technology companies, long known for their problems with representation and sexism; is this the population we want to task with codifying an international diversity of experience?

Still, at the end of the day, the Unicode Consortium is merely providing a number to represent emotions and objects; it is up to the purveyors of the software to interpret and depict these numbers. In May of 2018, Google commanded 76% of global smartphone use, and Apple 19%, meaning that 95% of all smartphone users — nearly 2.5 billion people — saw only one or two representations of the Unicode Standard. Additionally, in the first three months of 2018, Facebook averaged 1.3 billion daily active users while Twitter averaged 336 million.

If emoji are meant to be shorthand for an object, feeling, or emotion, that’s an incredibly narrow spectrum of representations users have at their disposal, and places a huge responsibility on the software companies to reliably depict the intent of the Unicode Consortium.

And what if software companies decide it is not in their best interest to reliably depict this intent? As concern over gun violence escalates in America, there is increased scrutiny on the discourse surrounding the issue; the most vitriolic exchanges have arisen on social media platforms like Twitter and Facebook, and these companies have responded by changing the pistol emoji to a squirt gun — in other words, a toy.

When the Unicode Supplementary Multilingual Plane and politics clash. pic.twitter.com/lYzYsnuutU

Last year I developed Send Me SFMOMA, an SMS-based service that lets users explore artworks with everyday language as well as emoji. I had little experience with emoji before this experiment, but quickly became familiar with the slippage between what people were asking for and what we returned to them. Though the project was initially meant to be a whimsical diversion, users inevitably sought deeper conceptual connections to the art, pushing me in turn to evolve my thinking while revealing the limitations of the current emoji palette. Nuanced queries like “send me Black Lives Matter,” or queries containing emoji whose colloquial meaning had diverged from their objective depiction, such as the infamous  🍆, left users unsatisfied.

Art is a complex and mercurial endeavor, as much rooted in struggle and inequity as it is in aesthetics. If emoji are to become adequate vehicles for discussing public health, the legal system, and art, their depictions need to be molded by users rather than a handful of software companies. When language is subjugated to corporate interests, we lose our ability to talk honestly and openly about the world, and some uncomfortable and disturbing juxtapositions emerge: 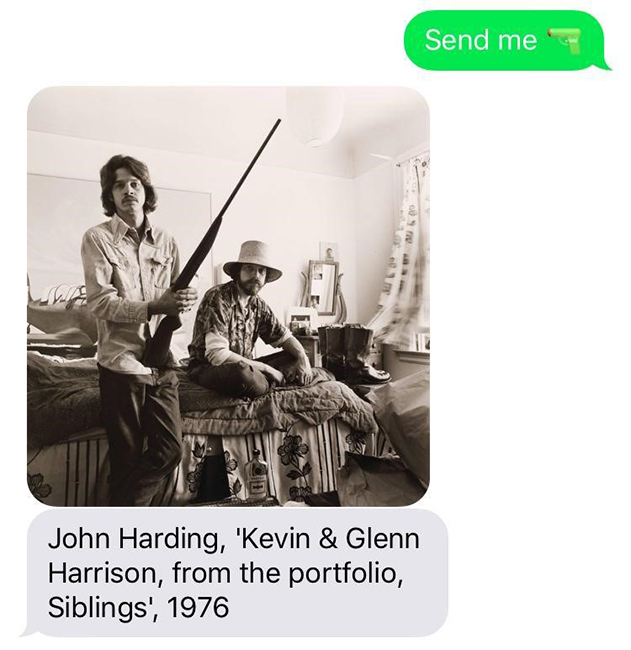 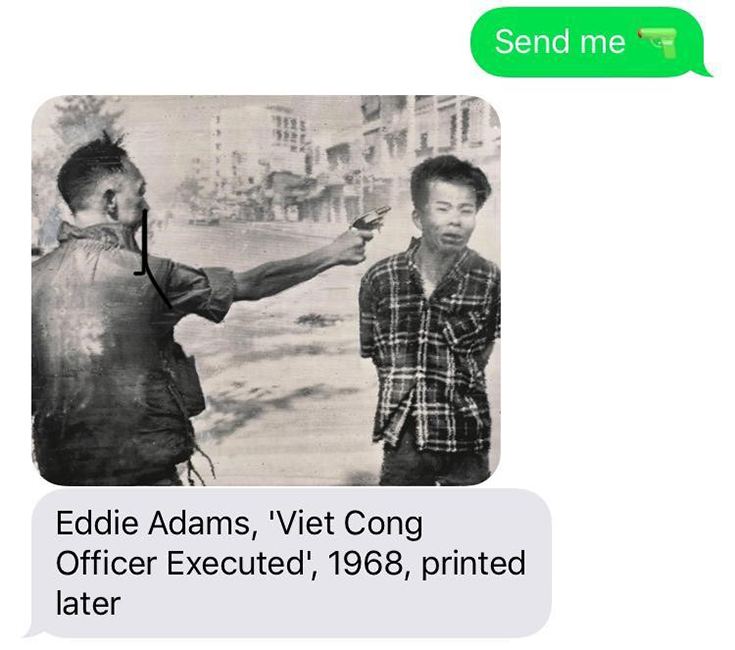 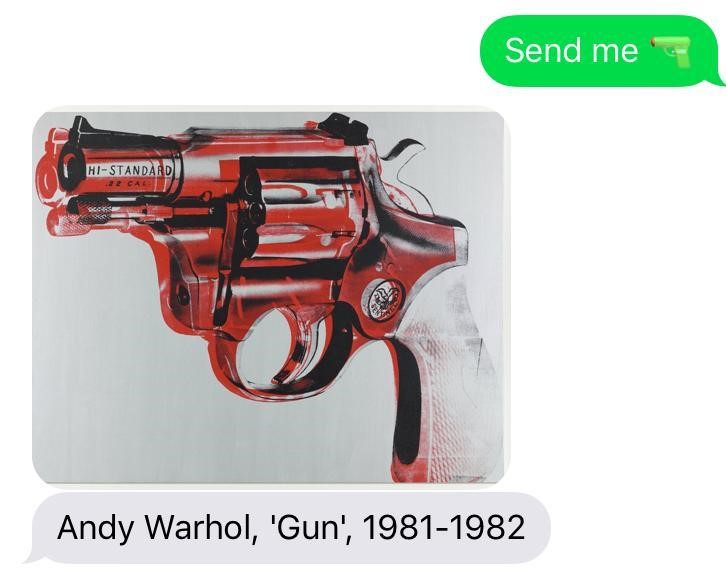 In his novel The Unbearable Lightness of Being, Milan Kundera linked this kind of forced conformity to a fascist government’s unbounded desire for control, and its efforts to limit expression to kitsch, a cartoonish denial of objective reality:

The fact that until recently the word “shit” appeared in print as s— has nothing to do with moral considerations. You can’t claim that shit is immoral, after all! The objection to shit is a metaphysical one. The daily defecation session is daily proof of the unacceptability of Creation. Either/or: either shit is acceptable (in which case don’t lock yourself in the bathroom!) or we are created in an unacceptable manner.

It follows, then, that the aesthetic ideal of the categorical agreement with being is a world in which shit is denied and everyone acts as though it did not exist. This aesthetic ideal is called kitsch.

“Kitsch” is a German word born in the middle of the sentimental nineteenth century, and from German it entered all Western languages. Repeated use, however, has obliterated its original metaphysical meaning: kitsch is the absolute denial of shit, in both the literal and the figurative senses of the word; kitsch excludes everything from its purview which is essentially unacceptable in human existence.

As emoji increasingly become a method of communication unto themselves, they need to provide us with the most complete and expansive range of human expression possible. The flattening of emoji under corporate influence is an overt example of more opaque and systemic censorship in social media, making it a good entry point to interrogate these platforms; the cartoonish erasure of sources of cultural trauma hints at greater manipulations perpetrated through technology.

What the tech industry can’t obfuscate behind algorithms is often relegated to some form of infantilization, in which a distinct work-life balance has been replaced by free food, ping pong, and services that do your laundry or drive you to work. This puerility is internalized so profoundly that it extends to corporate hierarchies and the way essential tasks are discussed. Software engineers are often colloquially referred to as “rock stars” or “ninjas” in job postings, and childish jargon is pervasive.

This year, a mosquito will be one of 157 new emoji added to the Unicode Standard. The argument for the mosquito emoji, made by the Johns Hopkins Center for Communication Programs and Bill & Melinda Gates Foundation, was firmly rooted in public health. The proposal states, “For many parts of the world, the mosquito is more than a nuisance — it is also a danger. Mosquitoes are the world’s deadliest animal ​— outpacing sharks, snakes and all others by a wide margin.” A mosquito emoji will allow people to easily communicate about the deadly insect to populations of varying languages and literacy levels. This usefulness serves as a kind of inversion of the ways in which other serious or controversial issues are mitigated. Why try to cover up or deny the existence of “real” guns, which are as rampant (at least in the US) as other “object” emoji? By emphasizing playfulness, utility is diminished; would someone be likely to interpret a squirt gun as a warning sign?

Unsurprisingly, when emoji are relieved of their techno-utopian custodians we find examples of more complex interpretation. Artists such as John Baldessari and Carla Gannis have produced works that highlight the absurd existence of emoji, or underscore their caricatured distance by placing them in scenes of trauma. Rather than cede a regime of symbols used by billions to an oligarchical Consortium, we should look for ways that emoji might evolve or multiply such that they can address real-world problems with the nuance of art. Radically new ways of communicating are at our fingertips; the power to shape them should be in our hands.