Your Pretty Face is Going to Sell

On YouTube, there’s a long tail of content that pretty much guarantees the inclusion of every potential human interest. There are skate videos, makeup tutorials, and backyard surgical removals of blackheads. And yet the presentation of a lot of this content — especially when it’s trying to attract a large audience — is remarkably similar. Everywhere you look, there’s YouTube Face.

The Face is hard to miss once you first spot it: an exaggerated expression, an overreaction to a given video’s subject, typically conveying heightened states like disgust, anger, or ecstasy. The assault of a bad smell; a bite of something intensely sour; a faked orgasm; an elbow to the guts.

YouTube Face is most prominent in the preview images for videos. It surrounds whatever video you’re watching in a big grid of emotion. Here’s one, attached to an instructional video for driving stick shift:

And another, for an irate video game nerd:

And another, for a roundup of bad albums:

And yet another, a collection of PG-rated body horror: 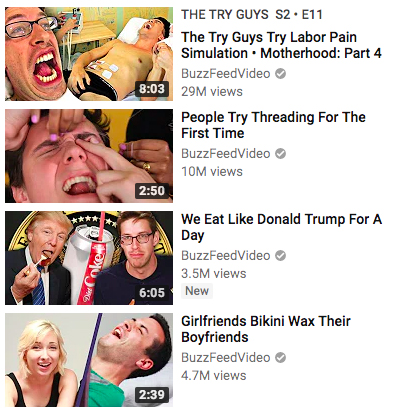 Taken cumulatively, there’s a surreal, Lynchian quality to the images. Few things could ever be exciting enough to elicit these kinds of reactions, and no one could possibly be this expressive. So what’s wrong with these people? Were their brains tenderized?

Like nearly everything on the contemporary web, YTF is the result of a series of matryoshka-ish financial incentives. The basic economic goal of YouTube, a subsidiary of the holding company Alphabet, Inc. — formerly Google, Inc. — is to get users to stare at videos for as many waking hours 1 as possible, so that they can be served ads tailored to their supposed interests.

To minimize overhead costs and ensure that an enormous amount of videos are uploaded, the burden to create content is placed upon the YouTube community. As encouragement, the company offers a small percentage of its ad revenue 2 back to eligible users, based upon the number of views their videos get. More views, more money.

As the video market saturates, various techniques lose their power, and the attention arms race escalates. Video creators seek increasingly extreme tactics, in form as well as content. YouTube stars fake murdering their friends for a prank, for example, or filming dead bodies for shock value. 3

At some point, a user discovered that a catchy preview image tended to trigger potential viewers’ curiosity enough that they clicked through more frequently. Most likely this notion was inspired by other forms of clickbait (in style, it seems to be a mix of ~2012 Facebook newsfeed viral garbage with generic chumbox aesthetics). Then another user discovered that including a facial reaction tended to boost views further (perhaps manipulating some kind of primal feeling of empathy or morbid curiosity in the pain of others?). Over time, view count metrics gradually pushed these facial reactions into more exaggerated expressions, making everyone look like extras in a Soundgarden music video.

The aesthetic seems to have been largely popularized by the “reaction video” genre. There’s The Fine Bros, who make videos of old people reacting to new things, and young people reacting to old things. Their ~1,500 videos have received over six billion views.

There’s also The Try Guys over on BuzzFeed Video. They are guys who try things, and then react to them. Their videos have received over one billion views.

Other popular channels outside of the reaction genre also use the aesthetic. Pewdiepie, for one: 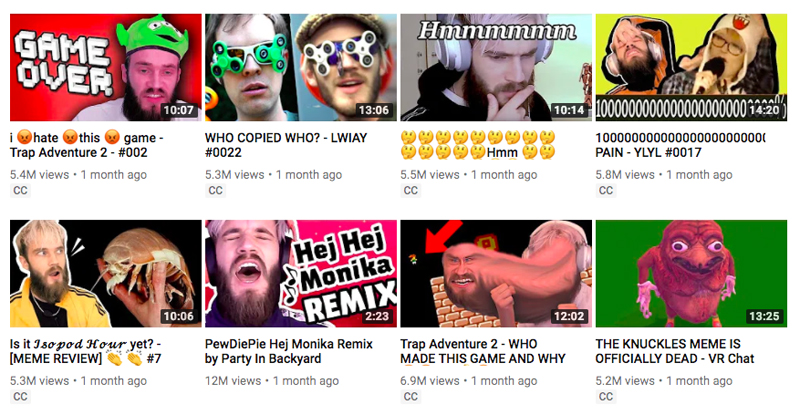 Perhaps strangest of all, reaction videos have spawned an odd meta-genre: people reacting to reactions:

And people reacting to reactions of reactions: 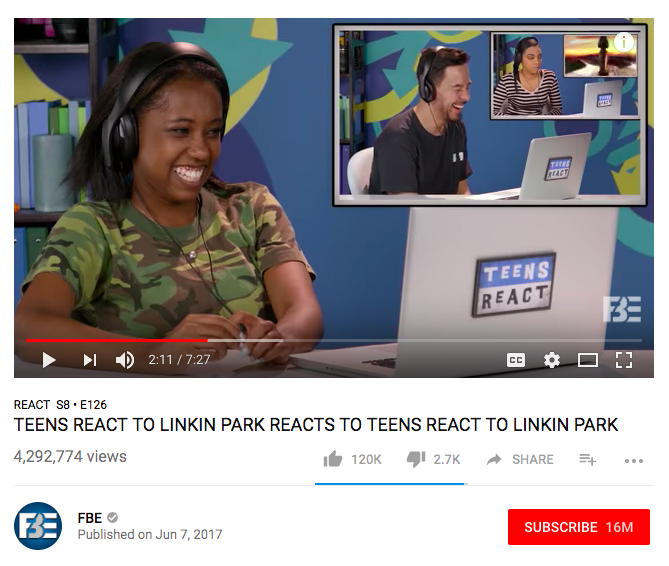 Getting attention on social media platforms requires creating content designed to perform well within their ecosystems. Everything must contort to please the almighty Algorithmic Gods. It requires some guesswork, as these algorithms exist at such an ever-increasing scale and complexity that even their creators don’t — can’t — understand them. The Algorithm Gods work in mysterious ways.

This has odd and often unexpected effects on the physical world. Restaurants attempt to create Instagram-friendly environments with nauseatingly kitschy interior designs. Hamburger buns are glazed to make them more aesthetically appealing. Extremist political campaigns are won partially on the strength of their shitposting. Perhaps the emergence of YTF hints at one of the many ways these algorithmic forces might begin to shape our physical appearances.

We’re also witnessing tactics common to the advertising industry, especially those of late-night infomercials, being utilized autonomously by individuals. People simulate the behavior of corporate brands, while corporate brands simulate people 4, hiring teams of flacks to help make something like, I don’t know, fracking seem “authentic” and “cool.”

Given the general trajectory of things, it seems unlikely that humanity will be exterminated by a vengeful AI, as some tech luminaries predict. No — we’ll all just be rendered into one giant sentient ad for subscription cosmetic boxes.

Yikes! But what do you guys think? Let me know in the comments below, and please take a sec to like and share my article 🙂