The Hand That Holds the Rod 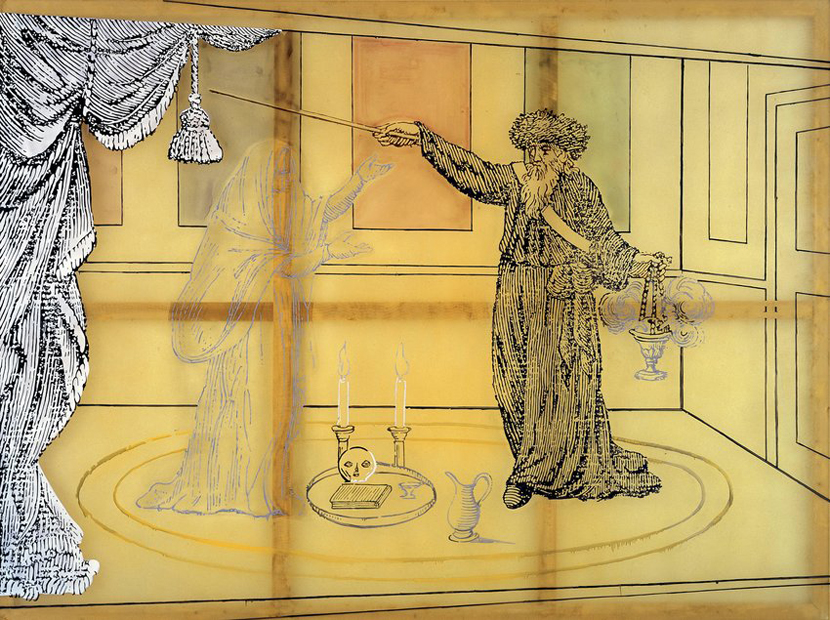 The painting is of course Untitled, because words are a fence and allegories avoid containment. But stated simply: There’s a warm, amber-colored room, invoked from thin black lines that limn the flat planes of walls and floor; the room is slightly off-kilter, as though approached from an angle. Within that space there’s a bearded man dressed in heavy robes, standing inside a doubled circle on the floor, a ringed barrier of gold. Near his feet are two candles, a book, a pitcher, a cup, and a skull. In his raised hand is a wand, and in front of him appears, just barely, a phantasm.

The man is a conjurer. Held aloft, the hand and wand issue the command: Arise. At a glance, everything in the frame is in service of this act: the drawn circles, the candles flickering, the thick spell book, the brazier in the man’s right hand billowing smoke, all exist in order to produce the shrouded revenant, to make her do the magician’s bidding. It would seem that her presence is the ultimate purpose of this staging, the reason for everything to be set in place: the amber room, the white curtain, the old man with his ancient spell. Yet she is thinly materialized, by far the least visible part of the scene. It’s a well-crafted painting, designed to move the eye from element to element. It might take a minute to realize that the closest thing to a central detail in this composition is the hand that holds the rod.

Three years ago I hadn’t felt joy in quite a while, and what’s most incredible to me now is that I was not at all conscious of its absence from my life. It had ebbed slowly, imperceptibly, through a long series of accidents and occurrences: My mother was diagnosed with a terminal illness; for the better part of a year I was away from my friends and from the solace of my studio. There was conflict with family and in other relationships, money woes, and death. Then I was awarded a grant and moved 6000 miles to Poland, a country where I knew few people and didn’t speak the language. Though outwardly my life probably seemed enviable, I struggled to navigate a different language and culture, and grieved for my mother in near-isolation. Depression was a gray veil drawn over my eyes, dulling everything; but technically I could still see, so I insisted to myself and to everyone else that I was fine.

Meanwhile, the world had its own troubles. On October 3, 2016, I dressed in black and stood alongside 30,000 other women in the rain as part of the Czarny Protest Strajk Kobiet (Black Protest Women’s Strike) in Warsaw. Czarny Protest was held to demonstrate public opposition to the Polish government’s plan to rescind abortion rights, and I spent the entire day in an enormous crowd, accompanied by a small cohort of my American and Polish friends. We assembled at the morning rally outside the ruling party’s headquarters and later made our way across the city to the evening gathering in the vast plaza in Old Town. We were packed into the throng under a canopy of umbrellas, furious at the government and apprehensive for the future, but also jubilant at our solidarity. As the six-o’clock crowd swelled with women coming from work, the mood grew even more determined. Here, in the pouring rain, the joy I did not even realize was absent returned to me. My feet hurt, I was hungry, cold, and soaking wet, my nose was running and I was out of tissues. But I was elated, ardent, and resolute. Somewhere inside me a small rusted wheel unstuck itself and slowly began to turn.

Over the next months, I began to find joy in other activities: I participated in more demonstrations; I wrote about the political situation in Poland, where it intersected with the art and artists that I was coming to know. I made artwork again, surrendering myself for hours to that singular combination of muscle memory and deep reflection. I wasn’t necessarily any happier; I was still grieving my mother, anxious about the future, and dealing with all the prosaic tribulations of living as an ex-pat. But it’s important to note that happiness isn’t joy. Joy has a toughness to it, a fierceness. Happiness is uncomplicated, while joy can hold within it discomfort, uncertainty, and anger. Happiness may be a smile, but joy has teeth.

Sigmar Polke’s practice has always been full of lessons for me: a lifetime of work and experimentation across media, chasing the indescribable, laughing at the absurdity of the world and himself, trying to comprehend the darkness. I return to his allegories because they approach the truth from a different vantage, a side-on view being somehow more understandable than a direct interrogation.

Untitled was completed near the end of his life, in 2003. Let’s look again at this rectilinear space and the logical, understood pattern of its structure: the cup, the candle, the skull, the return to old stories. The dancelike posture of the magician, his bent knee and outstretched left foot, the heavy cloth, his garments rustling as he moves. He chants from the spell book, lifts his wand in the warm air that rises from the candle. Rod over her head, the wraith appears. She reaches for him. Until: the weight of the robes across the shoulders. The eventual weakness of the hand. The wax pooling on the floor. The empty sockets of the skull that stare straight out, a reminder that all is fleeting.

“The hand that holds the rod” sounds ominous, as though someone is about to get a beating. But I mean it in a different sense — it’s seizing control for yourself in ways that are big and small, solitary and communal. It’s recognizing the knowledge and power that you do have and wielding it. To conjure, to change things, even momentarily.

At a guess, I’d say I’m like most people these days: My anxious, cortisol-shrunken mind careens like a lab rat between the electric shock of tragedy in my newsfeed and the dopamine pellet of a complete stranger’s approval of my social media posts. It’s a tedious and disheartening way to grind through a life. Most of the time it doesn’t feel like there’s a lot of mental space for something like joy, and yet it’s possibly the most important emotion to cultivate right now.

Now that I’m back in the US, I think about joy a lot. My heart is immolated by anger nearly every time I glance at a screen. There is so much to be mindful of, so much that requires care — our rights, our neighbors both proximal and distant, the environment, justice, safety, freedom — the onslaught of attacks leaves me and most of the people around me exhausted from maintaining defensive positions. But if we can find joy, through community and consonance, I’m pretty sure it will give us the energy to go on.

It’s worthwhile to consider another part of Untitled, one that goes beyond the picture-plane on the surface: The painting is transparent, which means it is a thing that self-consciously exists in the world with other things. The amber-roomed scene atop the visible wood supports also shows the wall behind it, which is in a gallery, in an institution, in a city. By looking at the painting, the viewer must also look at its physical and metaphorical context. It’s an allegory within an allegory. Nothing is independent, and what we bring forth is perhaps already extant; we don’t create, we only make visible.

How do we find our way to joy? I can only tell you what I know is true for me: It is bound inextricably to labor and challenge, to experimentation, risk, and the unknown. An act of will — or perhaps we should call it the enacting of will. I focus on the hand that holds the rod, the part of the self that tries for something more difficult and complicated than what was attempted before. In the end, what’s important is not the manifested ghost but the process of conjuring — the attempt to bring about a change of state, first in oneself, so that it may also be brought forth in the world — again and again and again.