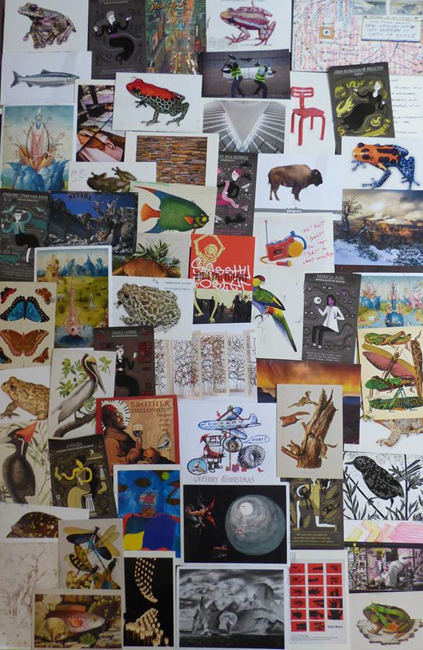 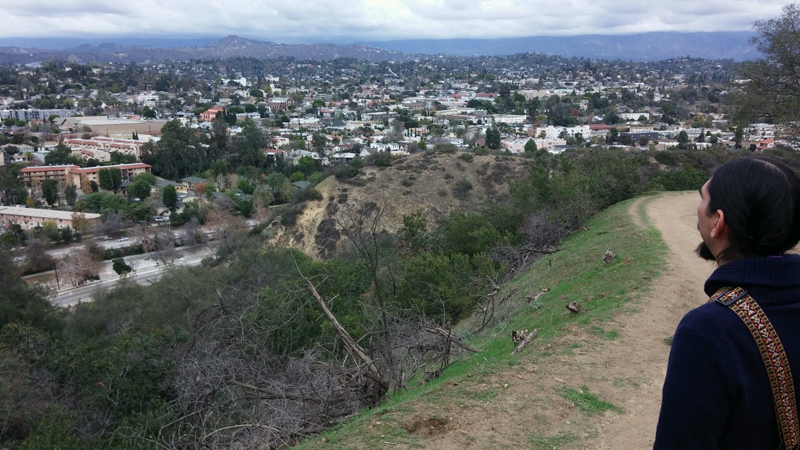 killer whales came and snapped up the man who was pale, who bravely swam through the freezing black waters of the ocean, they grabbed his head and threw him aside, then we (people and whales) rolled around together in tufts on the sloping grassy field 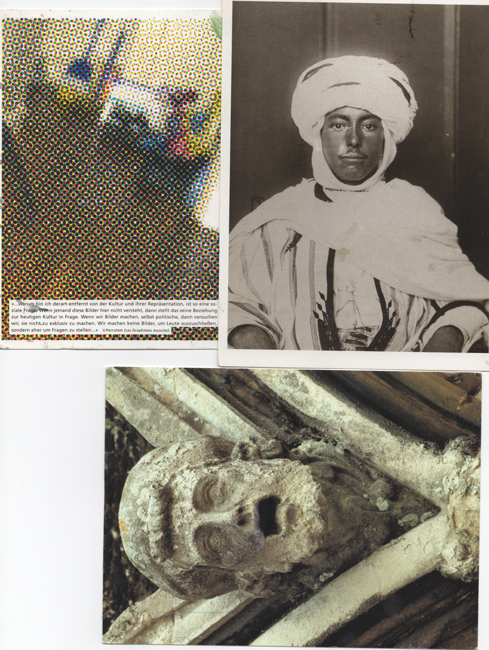 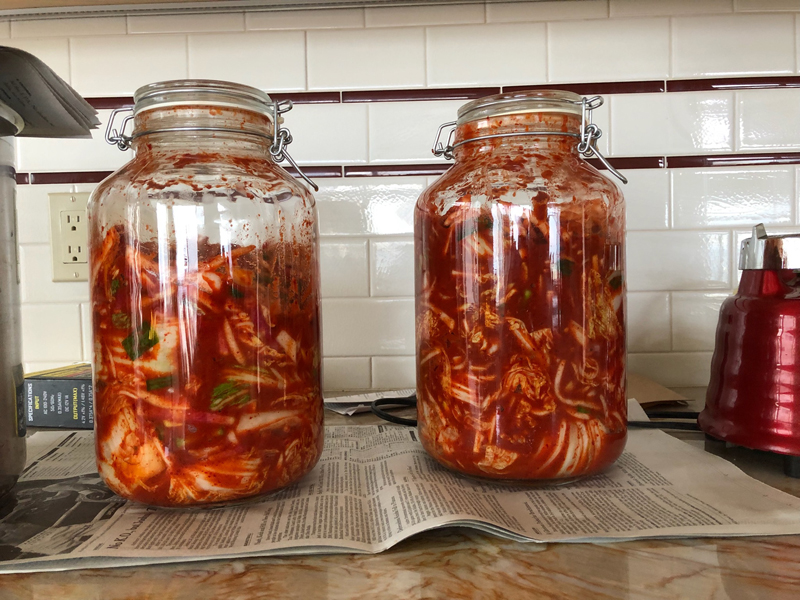 Dear Son (White male, twenties, I Saw Crashing a White Van into Parked Cars For Two Blocks With a Glassy Fixed Look of Fury on His Fuckhead),

I send you this Calendar of Our Collective Future Together:

2019 Year of the Foamy Distributor Cap: competitive edge from state capitalism (China) predicates that 1% US ruling class will take the money and run, abandoning investment in infrastructure and recapitalization of industry, socking money away in instead in speculation bubbles and off-shore accounts to the tune of last cell calls by 200 students drowned in the Sewol Ferry going down in gunmetal waters, by 30,000 or 50,000 disappeared in Mexico

2022 Year of Chromium Whispers: stymied by lack of resurgence at the box office for movie versions of the Life of White Jesus, the thousand white years of Moses, of White Buddha and his Little Buddy, Marvel and DC predicate the reboot of these narratives with tits and capes, with sneers and handguns, with X-ray vision and CGI, projected across forthcoming empty storefront minds of dust America

2023 Year of Low Hanging Color: indistinguishable from flailing violence of solitary figures exiled to continual diminishment along the avenues and bypassed corners of self-delusion, bituminous characters predicate economic decline for generations while dressed in the cuteness and cornball violence of American Loneliness, for the five years it takes a face to die in the mind or a mind to die in the face 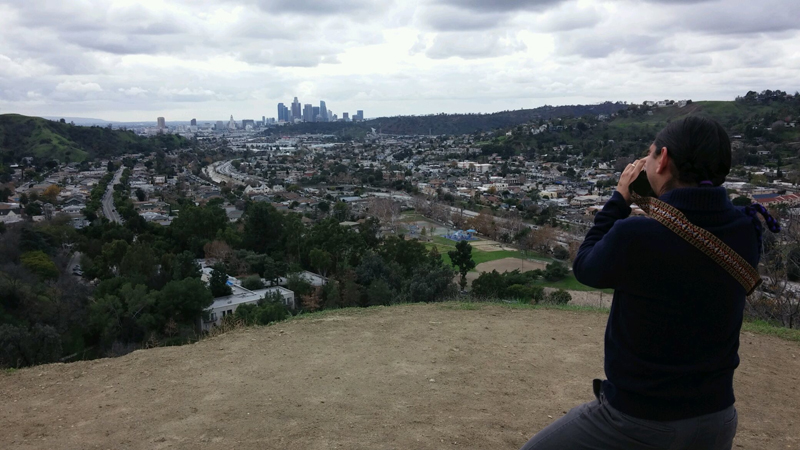 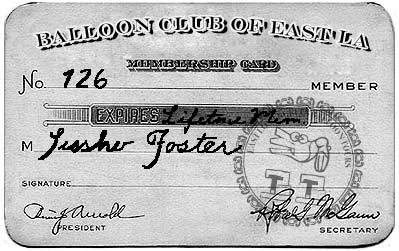 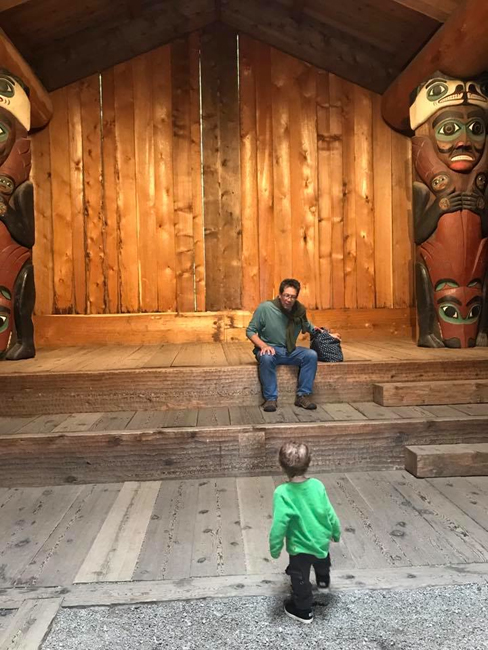 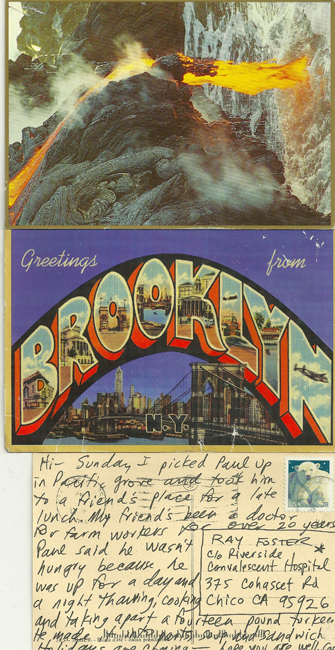 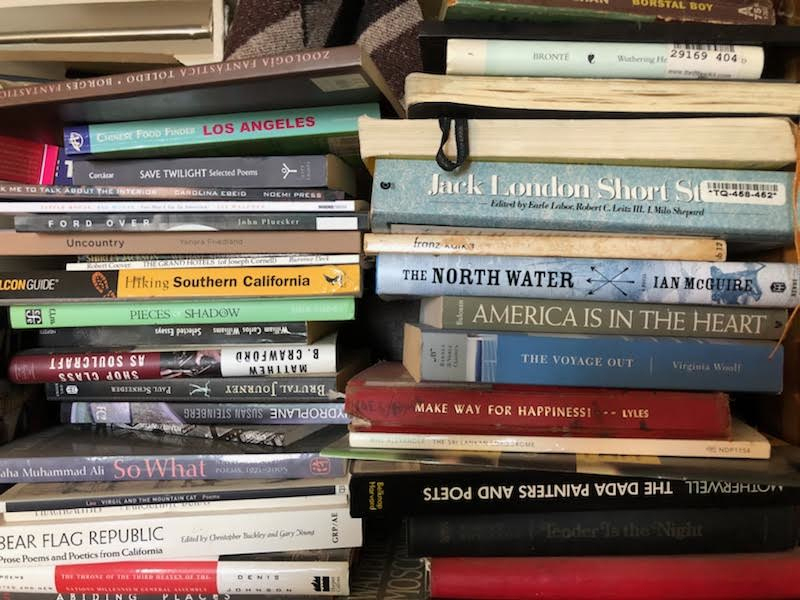 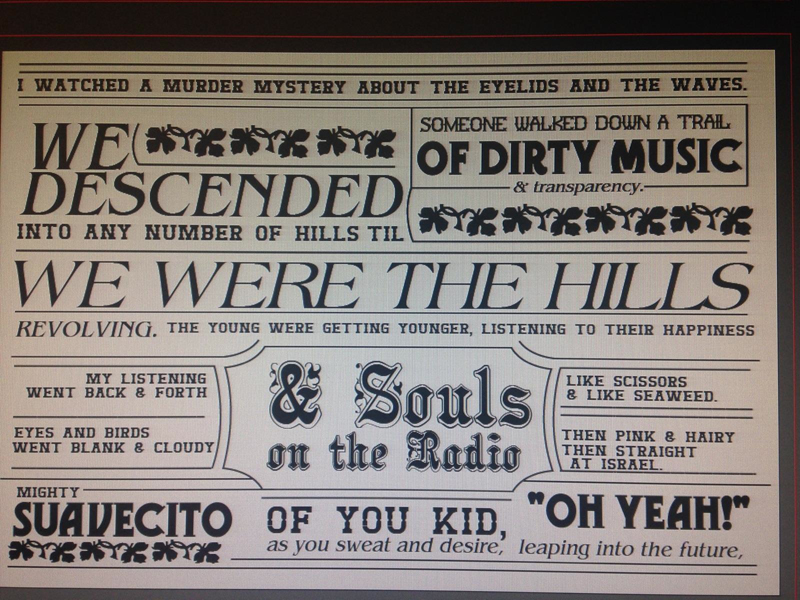 one day, the broken eye was looking through the torn pair of pants and saw the red desert on the radio waves, sounding like the song of machines in the dirt fish, “I want to wear smoke this morning,” said the broken eye to the ocotillo, “I rode my toothbrush all the way here now I am out of oil,” as long as there was chorizo grease all over my face and all over the red desert, okay — 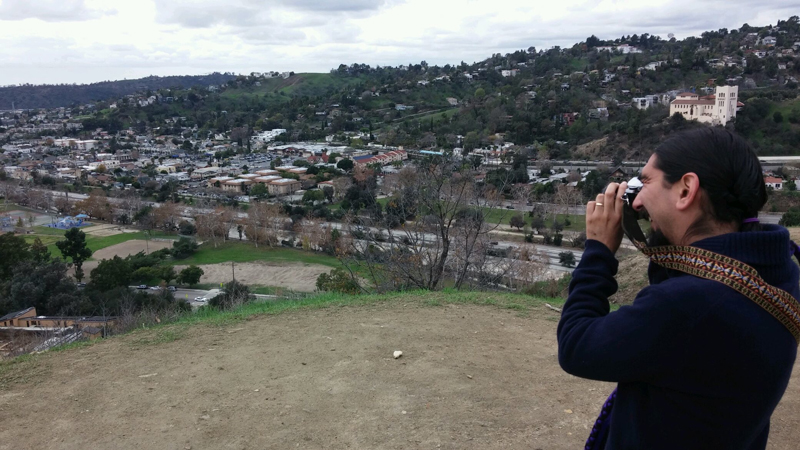 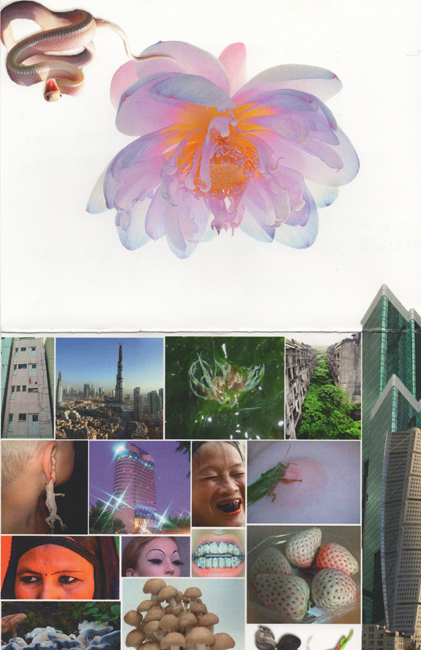 When she said my laptop was not on the table, I knew I’d left it somewhere at work, I drove fast to work through wet night streets missing my kids, I miss my kids like hot sweet curried cauliflower, like tart kale braised with garlic, I miss my kids like steam going through the kitchen, gone like late afternoon light far down long avenues, traffic shifting, like light flashing across corrugations of mountains at dawn, like the half-burnt small of fresh coffee, miss my kids — 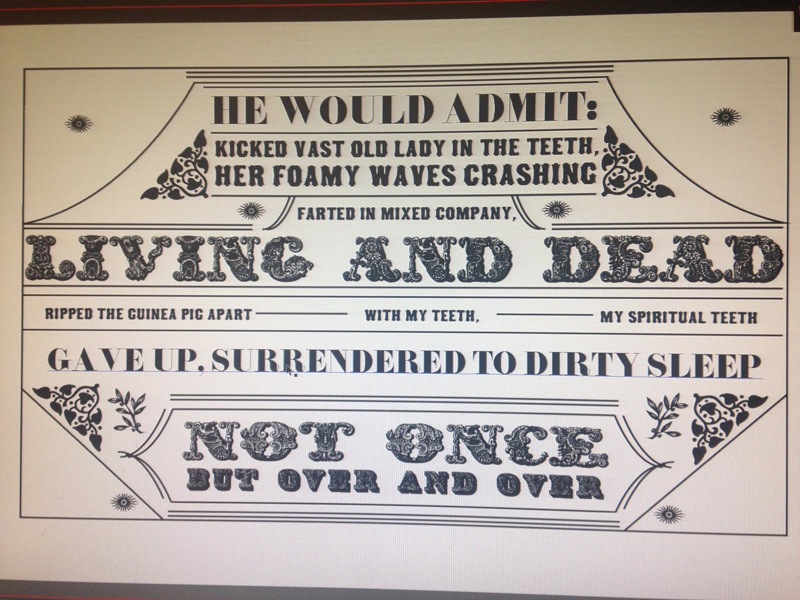 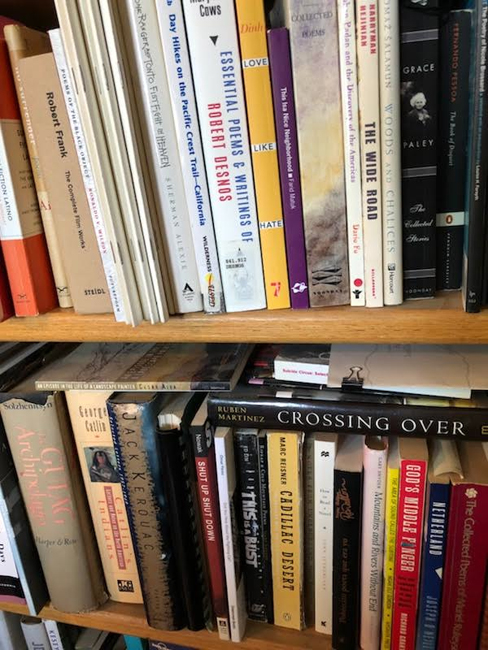 I drove really fast back to work to grab my laptop she mentioned I’d forgot it, while missing my kids like the creamy hot potatoes au gratin that I can’t eat, like the pungent salty blood sausage I never eat swimming in some imaginable soup with greens or mushrooms, passing vehicles on Huntington Drive at fifty mph, working too much makes me stupider and I’m probably working too much, I’m missing my kids like cream white yucca blossoms on a stalk in full sun, like the crisp black yucca seeds scattered by stiff wind from a stalk desiccated and black, hurrying over the viaduct through El Sereno hills, missing my kids like fresh-baked bread smell floats yeasty through a warm room, like footsteps slip through a house — 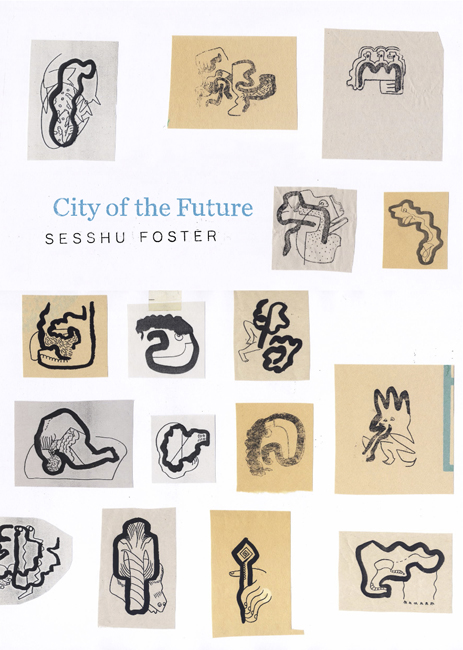 Knew I’d left it at work, the building empty but hallways fully lit and shining, driving through dark wet streets of night, miss my kids, missing them like somebody’s half-remembered bread smell in a faraway room, my vehicle hurtling through El Sereno hills hanging over the streetlamps, the old streetcar viaduct that’s already slated for demolition, I’m flying over it, missing my kids like the smell of a wet dog entering a room, like the siren of an unseen ambulance slipping and dodging rush hour traffic — but the streets are quiet, I miss my kids — 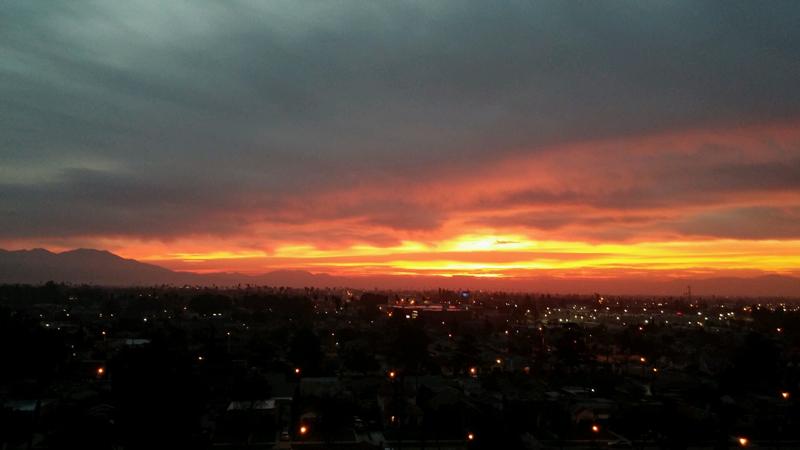 Please interpret these two messages I received today from the President of the United States.

You be the judge. In the first one, his face was too large for the screen, but in spite of massive pixelation, anyone could see who it was.

Telling about war on terror, war on everything. Me staring at his huge nostrils.

A flicker of movement — a human appendage drooped out of one nostril.

Floppy like a pale arm, its hand appeared to wave at me.

Okay? What was that about? Tell me.

In the second “message,” the screen went black. It took several hours of Internet searches and attempts to get the laptop to reboot.

Was that the actual message or is there another message that I must continue to search for? 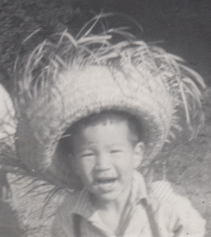 I brood through empty hours of wind like peering through yellow panes of an abandoned storefront.

I hike across the rocks above the one raven reckoning a huge moon would rise through thin clouds like striations of memory.

Early morning at Kelso Depot, a man uses a long arm with a mechanical claw to shift a load of steel rails by the tracks, a man sleeps in his camper shell with his boots jutting out, Kelso Depot is closed but I wash in the restroom and walk in sweet airs of pepper trees.

I eat cans poured over rice, looking out across fifty or 100 miles of valley scrub (US 40 twenty miles to the south), ranges folding into distant haze as if indistinctly recalled.

Fade at reading, fall asleep — finally I pay attention to whatever it was.

I needed to move through empty days without shelter, without shade

Forgot the toothpaste, found an old toothbrush so I can brush my teeth with nothing. Wash, rusty water from a pump.

Out of the night sky, the tireless wind.

You checked out Paiute petroglyphs, the semi-abandoned tract housing pads bulldozed into the desert, hiking out to the bighorns. 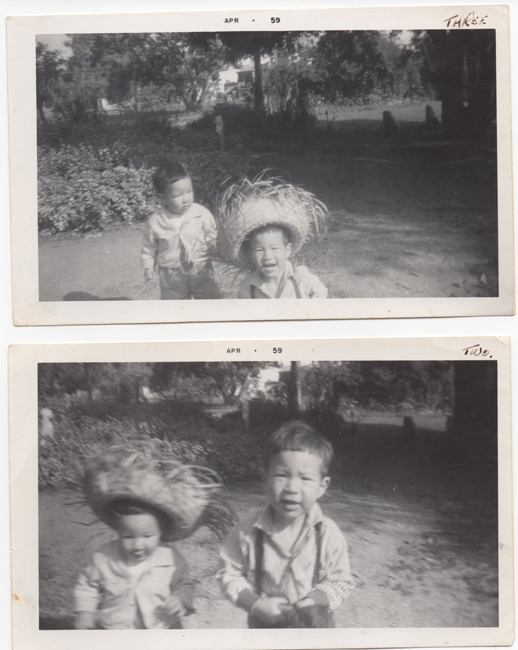 Coming back from the desert:

Thanks to Our Customers for Fifteen Years,

I saw all of them and some were alive, 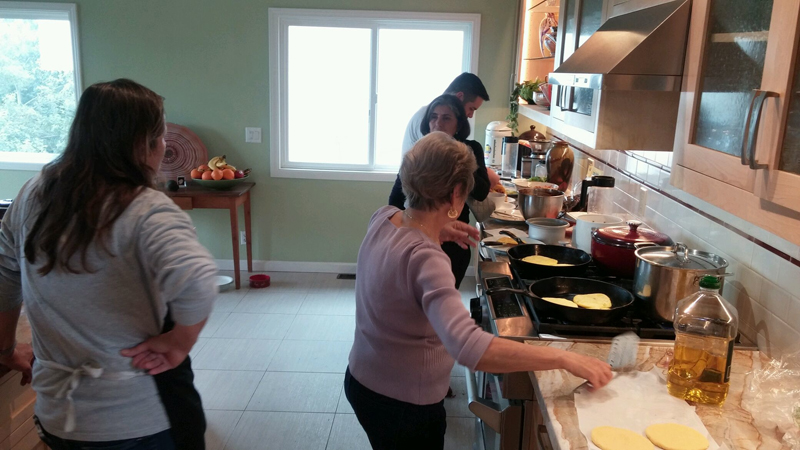 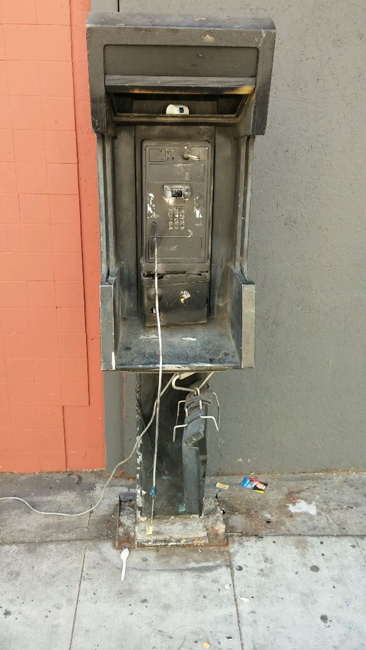 I have this idea I say we both make a killing on. A bunch! It’s an investment for our retirement. Which is coming up soon, one way or another, gotta admit. Check it out.

You remember, I was talking about it last time when we were hanging out, the later it got, you told me about motorcycle crashes, how you laid one down in a slow motion wreck in Monterey, and how Joe crashed his bike and just left it there, abandoned it, “Stupid!” Remember?

Anyway, the idea is this. The “Fury-O-Matic” machine. Coin-operated (nickel), facial recognition lens adapted off obsolete digital point and shoot, fingerprint ID if we can jerry-rig old Mac wires, encased in tin housing soldered from oscilloscope tubes and summer squash prototypes. Galvanized screw heads. The face features prominently the cellophane-yellow glare reduction gauge whose analog dial calibrates ferocity output with meticulous precision in metric decimals from the first noticeable (risible) intimations of irritation and annoyance (or merely incipient frustration, even inherited frustrations related to whining of generations) on a continuously incremental measure of pressure, vibration and emotion, all the way through to full throttle! Blathering outrage! Howling rage! Berserk apoplexy! Psychotic flying off the handle!

Put in your spare change and turn this machine all the way up!

No more time spent working yourself up over nothing! Zero to sixty in nothing flat!

Fuck it! Tired of wasting your outrage on news, on-line commentary and shit?

Let our “Fury-O-Matic” machine go balls-to-the-walls nutzoid on you! Emits a piercing shriek that can be heard throughout the next county and subliminal blasts of radiation that alters DNA at levels that you select (from mutagenic to palsy, from jaundiced to dementia). This machine will fuck you up! This machine can amplify your most insipid mutterings and whiny tantrums into gyrating storms of banshee terrorizing!

Existential dilemmas or infractions of your own secret personal codes? Let your friends and neighbors know how you really feel (even while you go about your business and get your chores done)!

Built in battery for those occasional power outages! Don’t let dark nights of the soul stop you. No three a.m. waiting on the morning light. Just flip your “Fury-O-Matic” switch!

You know how emotive digital stimulations are about to hit big.

We gotta monetize this shit, 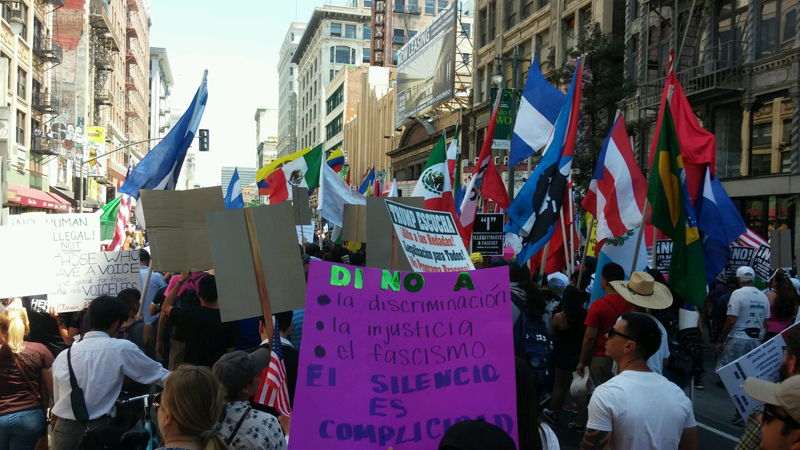