Who is Welcome in Wakanda? On Black Panther & Contradictory Afrofuturisms 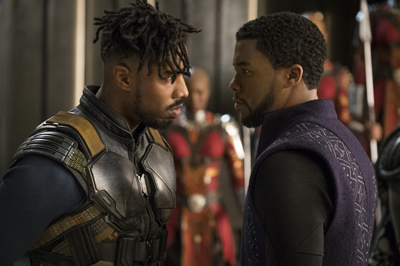 Michael B. Jordan and Chadwick Boseman in Black Panther. Marvel/Disney

Black existence and science fiction are one and the same.

The release of Marvel’s Black Panther has been seismic. In its first two weeks, the film has grossed $704 million worldwide, securing its place in Marvel and box office history. Wakanda, and its inhabitants, have entered the public lexicon. The titular Black Panther first appeared in the fifty-second issue of the Fantastic Four, preceding the emergence of the Black Panther Party by at least two months. For a short time in 1972, Black Panther went by the moniker Black Leopard as Marvel sought to dissociate itself from the radical Black movement — a factoid that exemplifies the contradictions fans can choose to grapple with or not, depending on their political leanings. Either way, there is a very real tension between Marvel’s past disavowal of Black politics and present-day promotional photoshoots for the film, featuring stars like Michael B. Jordan in Huey Newton-esque black berets and leather jackets.

Wakanda was introduced in 1966, a year marked by the beginning of the second Chimurenga (a guerrilla war fought for Zimbabwean national liberation) and the Congress of Racial Equality’s official endorsement of Black power politics. That same year also heralded an independent Lesotho, a country on which Black Panther director Ryan Coogler based Wakanda, citing the mountainous landscape that largely spared it from the onslaught of colonization. Coogler’s trip to the Kingdom of Lesotho is reminiscent of Spike Lee’s visit to Soweto during the filming of 1992’s Malcolm X, where Lee was welcomed by activists representing the Azanian People’s Organisation. “What we’re trying to do is champion the connection between Afro-Americans and the Africans who live on this continent,” he told Guyana’s Stabroek News. To Lee and a generation of Universal Negro Improvement Association-flag-touting children of the diaspora, Soweto and Harlem were simply two sides of the same coin. Notably, Malcolm X’s release was a similarly Hollywood-approved diasporic cultural event. Tie-in merchandise — from X-embroidered baseball caps to potato chips — was mass produced and marketed as stylized Black pride. Black Panther even harks back to this distinctive ’90s flavor of Afrocentricity with its opening, in which Black boys play basketball somewhere in Oakland in 1992. There are Public Enemy posters up on apartment walls; footage of the Los Angeles riots and drug war victims beam from television screens.

Wakanda’s borders are located within the disputed region of the Ilemi triangle. It is a technologically advanced state with a global network of spies. Powered by vibranium, Wakanda evades the real-world resource curses that plague Africa, like the bloodshed caused by the conflict commodities wolframite and coltan in the Congo. It does this by eschewing aid and limiting contact with the outside world. Black Panther wondrously chronicles a fantastically insulated African civilization with an uninterrupted temporality. We witness kings and queens, intact social bonds, Ancient Egyptian religion, inheritance laws, councils of elders, cosmologies, indigenous religions, and military might. These are the stuff of Afrocentric dreams. Unaffected by slavery, the foundational wrench that birthed modernity, or its gradual half-life, Wakanda is the ultimate what-could-have-been. Within the Afrofuturist canon, Wakandans remind me of the “goldens” in Samuel Delany’s 1967 novella The Star Pit. Delany imagines a future in which human expansion culminates in extrasolar colonies, wherein only a secret elite of “goldens” possess the ability to travel beyond the Milky Way without dying or succumbing to insanity. The “goldens” enjoy freedom of movement and status privileges, whereas everyone else is literally confined to the lower echelons. As Wakandans have been untouched by both European power and African disempowerment, they too are extraterrestrials hiding in plain sight.

On first viewing, Wakanda thrilled me. It then left me with a deep sadness I couldn’t quite explain. Wakanda’s isolationism, when thrown into sharp relief, implies its ruling elite did not intervene during the transatlantic slave trade, The Scramble for Africa and ensuing colonization by European powers, apartheid, the assassinations of anti-imperialist leaders, neo-colonial exploitation, Jim/Jane Crow, mass incarceration across the diaspora, the AIDS crisis, or even genocide. I am aware that its fictional borders, much like Africa itself, were drawn up by white, Western men (though it’s worth mentioning that Stan Lee and Jack Kirby were Jewish-Americans), yet Black Panther’s grand transformation is from Wakandan self-reliance to piecemeal soft power politics, represented through UN assembly speeches and the building of youth centers for inner-city Black kids. Put another way, this is Black anger management disguised as good governance. In contrast, we have Erik Killmonger, a Disney-fied caricature of a revolutionary. Killmonger is a former black-ops soldier whose back-to-Africa fantasies recall various historical movements, from the invention of Liberia and Garveyism to the repatriation efforts of London’s Committee for the Relief of the Black Poor. He desires what the scholar Ali Mazrui termed a “Pax Africana,” ruled, of course, by him.

“How are you going to be nonviolent in Mississippi, as violent as you were in Korea?” Malcolm X once asked, simultaneously critiquing the 1963 March on Washington and America’s culture of outsourced violence. Killmonger has killed in Afghanistan and Iraq, probably in aptly named black sites scattered across the globe. Even his scarified body is an example of a uniquely American imperialist bastardization; the traditional African practice of scarification perverted into a kill list. Killmonger steals, or rather steals back, a ceremonial mask from a British museum. This totemic re-appropriation strongly signifies the ways in which those in diaspora relate back to the motherland through an embrace of symbolism. I immediately thought of the dog mask in Charles Burnett’s Killer of Sheep, another film depicting the stunting of Black dreams.

Wakandans and their brand of Afrofuturism belong to Sun Ra’s race of Angels. In a 1971 UC Berkeley class, Sun Ra posited that black people need a “myth-ocracy instead of a democracy.” He spoke of his desire to be the baddest, in more ways than one. “All I see on this planet is something evil like the white man being successful, and successful, and successful, and successful. And I see evil killing Black men every day, destroying him. Why should I be good?” Sun Ra’s futurism is both the isolationism of Wakanda and Killmonger’s Fanon-lite fervor. I don’t believe Killmonger is a misunderstood hero, as many have argued. He’s just a Black person who wasn’t lucky enough to be raised in Wakanda. His world is one where Africa is only ever imagined as a hotbed of dystopic dysfunctionality, where all relationships to and with it are defined through the logic of extraction and degradation. As many have pointed out, Killmonger murders and intimidates Black women while T’Challa and his lineage of Black Panthers have stood by and watched their centuries-long subjugation from within the safety of Wakanda’s closed borders. If we only recognize the violence of the former, we need to question why.

Killmonger brings the contagion of Black rage to Wakanda. To an audience, the message is clear — there will be no compromise with Killmonger’s Black future. Anything, including the suffering of the global African diaspora, is more bearable than Killmonger’s vision. Nakia, the spy and eventual coordinator of Wakanda’s budding social outreach programs, advocates for the admittance of refugees and sharing of Wakandan technology. In a bitingly ironic twist, Nakia, along with Queen Mother Ramonda and Shuri, become refugees fleeing Killmonger’s wrath. Nakia’s futurism is one that cannot witness the world as it is without offering assistance, albeit in the reformist and institutionalized form of outreach centers. T’Challa can compromise with and even later adopt this schema of liberation as it doesn’t challenge his position or even seriously interrogate the power differentials inherent in Wakanda’s burgeoning relationship with the diaspora.

What does it mean to pursue futures that leave the rest of us behind? We want worlds beyond racialized immiseration but we can’t seem to think beyond borders, nation-states, the CIA, and the Four Policemen of the UN. In many ways, the fact that I’m even asking these questions is a testament to Black Panther’s uniquely ambitious and stirring power. There aren’t many comic book adaptations that have, and will continue to, inspire such fierce debate and scholarship for decades to come. Yet Afrofuturisms that replicate our current world’s anti-human and anti-Black configurations can never be technologies of the tomorrow. They are only the evidence of our impoverished imaginations. We can do better than counter-futures that are still enthralled by the power structures of the present. The critical work of examining our own fantasies is on us and only us. I will watch Black Panther again, but I will continue to dream bigger dreams than it can give me.