re: Contextualizing the Cyborg 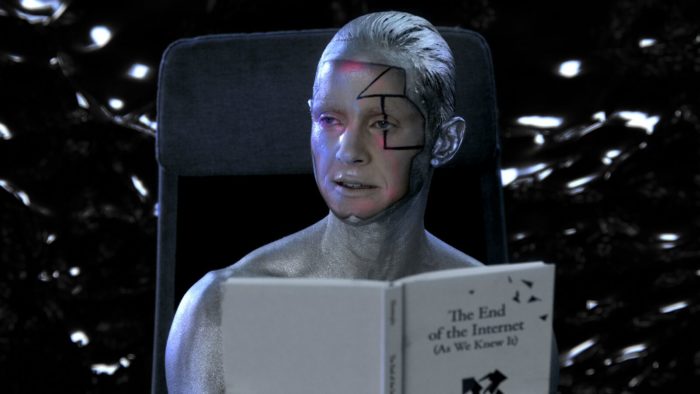 As 2017 drew to a close, the Institute of Contemporary Arts, London hosted the Post-Cyber Feminist International, marking the twentieth anniversary of the The First Cyberfeminist International, which convened at documenta X in Kassel, Germany. The ICA’s five-day event took the “contemporary ubiquity and commodification of the digital sphere” as its starting point, contending that our informatic social reality requires a specific feminist program: post-cyberfeminism. 1  This feminism maintains that female-identifying, queer, trans, and non-white individuals should know how to code, hack, and advocate for our personal privacy, reproductive rights, and labor conditions. In doing so, we should be equipped to navigate, respond to, and change the white male-dominated technosphere, which relegates us to subjugated roles, or worse, is entirely inhospitable to our presence.

Cyberfeminism has diffuse origins, intentionally lacks a unified definition, and, like feminism itself, has evolved intersectionally. The first cyberfeminists were full of optimism about the radical potential of digital information technologies — a hope, it seems, still found among post-cyberfeminists. The ideological basis for cyberfeminism is that virtual networks enable a fluid identity: by adopting a digital avatar or avatars, one can virtually embody a self beyond the confines of the physical body, with its sexed, gendered, racialized, and classed connotations. Even though she was not a member of the cyberfeminist movement, Donna Haraway’s description in her 1985 essay “A Cyborg Manifesto” of the cyborg as chimeric goddess of virtuality in a “post-gender world” served as an apt metaphor for the group’s notion of the self’s fluidity in cyberspace. 2

But the cyborg of Haraway’s text was already a metaphor: an ironic rhetorical device, intended as an alternative to binary or dialectical thinking, hyper-aware and cautionary of its militaristic and capitalist origins. Sequestered from Haraway’s essay (as well as her larger body of writing) as an illustrative device, the cyborg was decontextualized from Haraway’s complex, at times paradoxical politics, 3 becoming a metaphor of a metaphor, a “creature of fiction” more than one of “social reality.” 4

In Haraway’s latest book, Staying with the Trouble: Making Kin in the Chthulucene (2016), her multispecies feminist theory considers the “critter,” her term for all living matter, mammalian to microscopic. Critters participate in a diffuse, collaborative web of “becoming with” all other critters. Haraway’s cyborg was critiqued by feminists, particularly women of color, for being too homogeneous with regard to the particularities of lived experience; the critter redresses this by accounting for the distinctiveness of all living beings. Haraway does not admonish the cyborg, but instead says what it is not: “Cyborgs are not machines in just any sense, nor are they machine-organism hybrids. In fact, they are not hybrids at all.” 5 For Haraway, the cyborg will be understood in its nuanced complexity again, but this time, through the framework of critters. It’s a theoretical repositioning that distances Haraway’s cyborg from the notion of a “technofix,” her term in Staying with the Trouble to describe the belief that technology will somehow save us critters and our dying planet. The technofix manifests as a pillar of our dominant ideology, emanating from the symbolic geo-political power space of Silicon Valley, with its technologically-determined, privatized solutions.

We would not have our present technofix fetish without the forbearer known as the “Californian Ideology,” what Richard Barbrook and Andy Cameron identify (in a 1995 essay of the same name) as Silicon Valley’s strange and specific breed of liberalism: a blend of hippie “freewheeling spirit” and free markets. Socially progressive in intent, yet irrevocably tied to a utilitarian bottom line, “dotcom neoliberalism,” as it was termed by the authors, results in a blind faith acceptance of information technology’s “emancipatory potentiality.” 6 The emancipatory potentiality of technology is the very basis of cyberfeminism — confusing given the otherwise progressive thinking of its members, but perhaps admissible with thirty years of hindsight on our side. More confusing, then, is post-cyberfeminism’s retention of this techno-utopian ethos.

Founded by the polymorphous, international collective Laboria Cuboniks, Xenofeminism (XF) is a movement 7 whose central query follows the logic of the technofix. “Why is there so little explicit, organized effort to repurpose technologies for progressive gender political ends?” Cuboniks asks in their manifesto, “Xenofeminism: A Politics for Alienation,” which goes on to state that “XF seeks to strategically deploy existing technologies to re-engineer the world.” 8

Cuboniks is either unaware of or purposefully fails to mention that Shulamith Firestone’s “cybernation,” outlined in her 1970 book The Dialectic of Sex: The Case for Feminist Revolution, offers an explicit response to the collective’s question, calling for a programmatic re-engineering of society through the integration of cybernetics (her two main examples are reproductive control and automation). Where Firestone’s program is communist, however, Xenofeminism is decidedly accelerationist, following an economic theory that seeks to speed up techno-social advances so as to radically overturn the status quo. Its manifesto is closely allied with Nick Srnicek and Alex Williams’s “#ACCELERATE MANIFESTO for an Accelerationist Politics,” which expanded into Inventing the Future: Postcapitalism and a World Without Work (2015). How can intensified capitalism solve the ills of neoliberal global capitalism? When there is nothing left to extract, we will be left with nothing, not a new system. 9 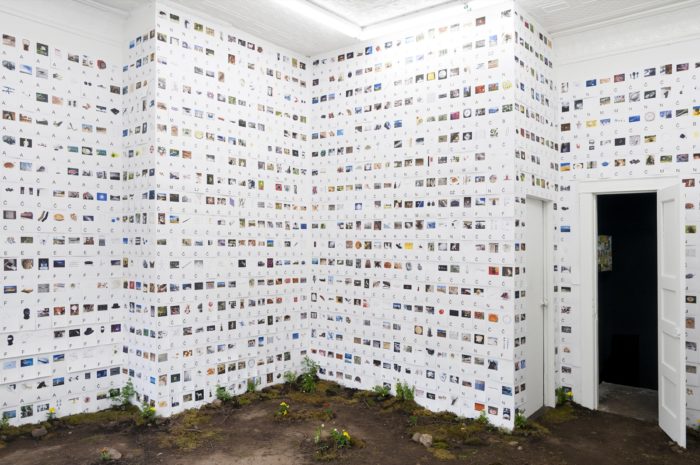 Adriana Ramić, Machine that the larvae of configuration, installation view, Kimberly-Klark, 2017. Courtesy of the artist.

Through the nineties, and even into the period of Web 2.0, there was hope that the internet could be a democratic platform that would grant individuals anonymity. Such techno-optimism dovetailed with the cultural crisis of that moment, identity politics, which explains in part why the first cyberfeminists saw the internet as a tool for radical liberation, in theory and practice.

We’ve since seen this idealism swing sharply in the other direction, with emerging platforms serving as a boon for the “alt-right” as much as for gender or racial equality. Power dynamics rooted in sex, gender, race, and class were simply transferred over into the virtual networks of the internet. At the most recent DLD (Digital-Life-Design) Conference in Münich, for example, Dr. Carl Benedikt Frey spoke on the panel “Automation & The Future of Work,” noting that “women are much more likely to be found at work in front of a computer,” while “men are much more likely to be found at home in front of the television.” Both sexes lose in this scenario: women are working more for less and men are increasingly unemployed. It may be that in moments like these, we see Firestone’s cybernation working against us. 10 Or, take this statement: “There are NO girls on the internet.” Rule number thirty of the “Rules of the Internet,” a memetic list of “rules” written by the collective Anonymous and circulated among 4chan users, definitively stakes out a masculine space on the “real” internet, free of contributions by and for women.

Women are hated on the deep internet, with its misogynistic, bellicose message boards and Reddit threads. The “manosphere” — the more insidious, virtual equivalent of a man cave — ascended beyond its subcultural depths and pipelined into Silicon Valley this past year when former Google software engineer James Damore wrote the now-notorious memo arguing that women displayed “biologically” inferior engineering capabilities (Damore was fired in August, and filed a class action lawsuit against the company in January, claiming the workplace was hostile toward his conservative political views).

As Haraway rightly notes in Staying with the Trouble, “it remains important to embrace situated technical projects and their people,” 11 a directive that includes both cyberfeminism and post-cyberfeminism. But we must separate technical projects from the techno(capitalist)-progressivism on which their programs are too often based. Aidan Koch’s Institute for Interspecies Art and Relations, a “publishing and resource center at the intersection of ethics, biology, and art” 12 that will open later this year, or Adriana Ramić’s Machine that the larvae of configuration (2017), equal parts machine learning library and ladybug garden, are two projects that feel like steps in the right direction: scientifically and technologically-driven, yet collaboratively interspecific. Perhaps these steps will someday bring us to collective action — something that the continued misappropriation of the cyborg, one motivated by optimization and individuality — the picture of Silicon Valley’s “Californian Ideology” itself — cannot yield.