Draft for an epic #2: Ghost Stories 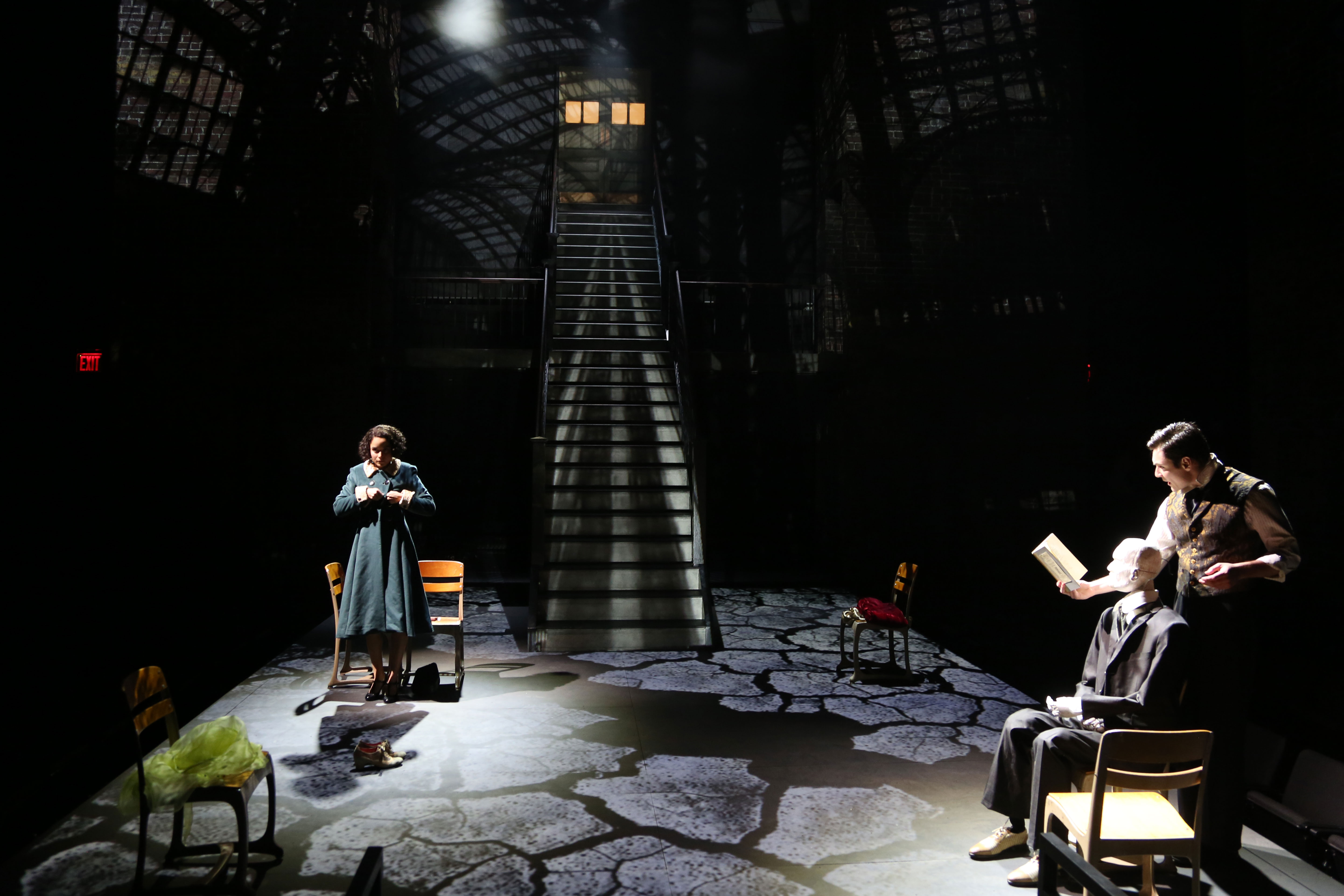 Juliana Canfield and Tom Pecinka in Theatre for a New Audience’s production of He Brought Her Heart Back in a Box by Adrienne Kennedy, directed by Evan Yionoulis; photo by Gerry Goodstein.

Here I go again: trying to flesh out an incomplete story with my own fantasies.

I say this to myself when I first learn that Adrienne Kennedy’s new play, He Brought Her Heart Back in a Box, is to premiere in Brooklyn at Theatre for A New Audience. I tell this to myself again a few days before the show as I purchase my ticket from the friendly box office associate. I think about this as I dress to attend the closing night of the production.

I am predicting my own emotional response to Kennedy’s story. I have queued my tears, my gasps, my head nods. I am making space for a story that is mine yet not quite mine.

Yes, Heart is a tightly written, forty-five-minute play. It is also a searing entanglement of memories, dreams, facts, and truths (there is a difference, no?) that pulsate with(in) me long after I have left the theater. Kennedy, in her signature style, takes up the autobiographical as a malleable entity that haunts. There is Kay (Julianna Canfield): the young Black, biracial woman. There is Chris (Tom Pecinka): the young, well-to-do white man. They are in love. There is the town: Montefiore, Georgia, in the early 1940s before the United States enters World War II. There is death: Kay’s mother, Chris’s father. There is distance: the play opens as Chris meets Kay at her boarding school in their quiet, segregated town. We follow the pair’s romance as Chris heads to New York to make it as an actor. Kay attends college. They are long-distance lovers whose letters are filled with real-time revelations (Kay’s campus anecdotes, Chris’s professional milestones) and accounts of the porous details that surround the lives of the people who made them.

There is fact: Kay’s teenage mother departs abruptly for Ohio shortly after giving birth to Kay. She dies up North. Kay’s father is a well-to-do white man who may have raped Kay’s mother. There is a truth Kay struggles to wrap her mind around: Did her father murder her mother? They say he brought her heart back to Georgia in a green glass box. There is an end: Kay and Chris return to one another as Kennedy’s lyric concludes. They die. (Though if I am honest, this end as death does not feel entirely clear to me in the world that Kennedy constructs.)

As the actors take their bow, I turn my head to my left to look at the person sitting next to me. They are crying, quite profusely actually. I successfully muffle my own sobs. Maybe this person is also attempting to tread a chasm. I cried, I tell a friend as I leave the theater. I had a feeling this would happen, she says.

The young woman is holding a photo from her parents’ 1983 wedding. She has seen this image too many times to count. There is a gentleman in a wheelchair; a bride; the grandmother; and an older, white gentleman. The people in the photograph stand close to one another; elation is evident in their smiles.

The young woman (looks up from the photograph, points to the older, white gentleman): Grandma, who is this man?

The grandmother (looks up with slight disinterest): Girl, you know who that is — my dad.

(The grandmother emphasizes the word “girl” in that way that Black mommas and aunties and sisters emphasize it.)

I did not, in fact, know who this mysterious man was. I had not, in fact, ever known who he was. Had not in the slightest instance considered the possibility that my great-grandfather would be this person. You see, my grandmother is a woman who was raised by her grandmother because she had a mother who worked long hours as a domestic. This was the Virginia of my grandmother’s girlhood, the mid-1940s, and early 1950s. These are not unusual circumstances. We know that the jobs made available to Black working class people throughout the South in the immediate generations after slavery were often jobs as sharecroppers and domestic help.

(This is slavery’s afterlife.)

In no instance, however, had my grandmother ever referred to herself as a mixed-race woman. Had never made mention of a father or even a father figure. The stories of who she is have always been connected to her mother and her mother before her and so forth. And I do like tracing myself in this matrilineal way as well.

What strikes me most about Heart is how loud silence becomes in Kennedy’s hands. Yes, at times I found myself itching for the script to reference. Sometimes I worried that I missed a reference. Yet, we are given to hold a love story that is also deeply connected to a quiet tragedy which is why I was a mess of a patron that Sunday night. Though details are different, something about Kennedy’s play settled itself alongside the murky story I have come to know about my own people.

There is Leila: my grandmother’s mother who, as I knew her, was always an anxious woman. We might also say her nerves were bad. There is Carl: my grandmother’s father, a man who I never met despite him living but two hours from where I grew up. They are both dead now.

There is fact: My great-grandparents met one another and decided to start a family. They had four children together. This is before the Supreme Court case Loving v. Virginia ruled interracial marriage constitutional. There is another fact: Carl and Leila do not finish what they start. He leaves her. My family does not see him again until my parents’ wedding in 1983. He was invited by his daughter, my grandmother. The family does not see him again after this. He dies shortly after I enter college in the early aughts and no one invites my grandmother and her only remaining living brother to the funeral.

There is a truth I am trying to confront: Two Black women hold or have held the consequences of a departure. I want to unpack the silence of this tragedy and allow it to fill a room.  (The hauntings of our ghosts also live on.) Maybe a certain type of pain can only be healed generations removed from the tragedy itself, no matter the scale.

I could also be wrong. This is just a draft.

Saidiya Hartman tells us that we make use of the autobiographical as a way to examine social and historical processes, that we use our own formations as a window onto these processes, as an example of them. 1 This is to say, that, paradoxically, even as Kennedy wades in surrealism she points her way towards the concrete. How do you build a story from the remnants and (re)memory and residue of someone else’s life? What does that look like materially? If it’s not what Kennedy has done with Heart, indeed her entire body of work, then I will wait for you, dear reader, to provide me with an alternative.

I am not interested in wading in cliché. But I do want to tend to Hartman’s autobiography here. It is very difficult to write about oneself, one’s family, one’s secrets. It is even more difficult to render this publically. In my family, I have become the investigator. The translator. The person most interested in excavation. You would not believe how many times I have tried to ask my grandmother about her parents. How did they meet? Were they really in love? Why did Carl leave? How did Leila deal with this pain? They say she rarely spoke of Carl after he left her. And she was always so, so anxious. Why do we only have a myth of a thing?

I think, what I am trying to do is push through the mystery so that I might better see myself. Those of us who are the descendants of chattel slavery know that our bloodlines are mixed. We do not doubt this. What I am trying to do is mine the gap that is closer to me than I once suspected. If I am interested in unpacking what it means to be Black and woman and Southern and all the things that live in between those sites, then what I am also saying is that I am interested in addressing, to borrow from Tiya Miles, the fragments of the remembered past(s) which have been spirited into our present time in order to disrupt the now. 2 No, I do not feel lacking in any way. I could have gone to my grave never knowing about this not-so-distant white patriarch and I would have been fine. But. I held the photograph one day and I decided to ask about this face I did not recognize. I cannot now unask this question.

What is at stake for me in the silences? Maybe that is even selfish. How’s this: what is at stake for us if we do not learn how to listen? I am trying to listen to the Black women around me, the Black women who have made me even if they are not speaking aloud. Even if they are already dead. Intimacy is, as the artist Chloë Bass tells us, neither good nor bad. It just is. We must confront it in all of our relationships.

If we find ourselves in the same room one day, I might ask Adrienne: why do you attend to that which haunts you and the hauntings that you have inherited?

To which I imagine her replying: Isn’t the South full of this? Aren’t we, Black people, forever grappling with our haints?

Tags: Adrienne Kennedy, ghosts, Haints, He Brought Her Heart Back in A Box, The South, Tragedy