Notes on a Sustainable Art Practice 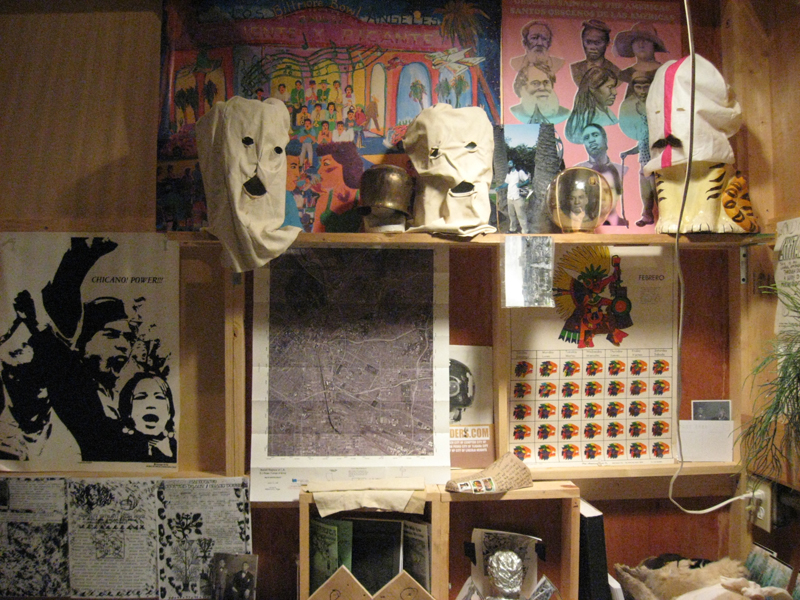 “We seek to be a moving reflection, absorbing all manner of hard and soft edges — a crystal on an invisible, irregular axis, wheeled down the street, creating brilliant reflections and casting off distortions of itself and its surroundings in all directions,” Arturo Romo wrote in his Crystal Brilliance Manifesto, a pamphlet that unfolded into a poster.

This manifesto was published, printed at Self-Help Graphics in East Los Angeles, designed and printed to anticipate Romo’s forthcoming installations and exhibits, including Rended Façade, an installation that was part of the 2008 Los Angeles County Museum of Art (LACMA) exhibit, Phantom Sightings: Art after the Chicano Movement. However, like other parts of Rended Façade, and similar to other parts of Romo’s subsequent installations, the Crystal Brilliance Manifesto poster was specifically designed to be placed in a stack as part of the art work to be taken away, physically, piece by piece, by viewers. 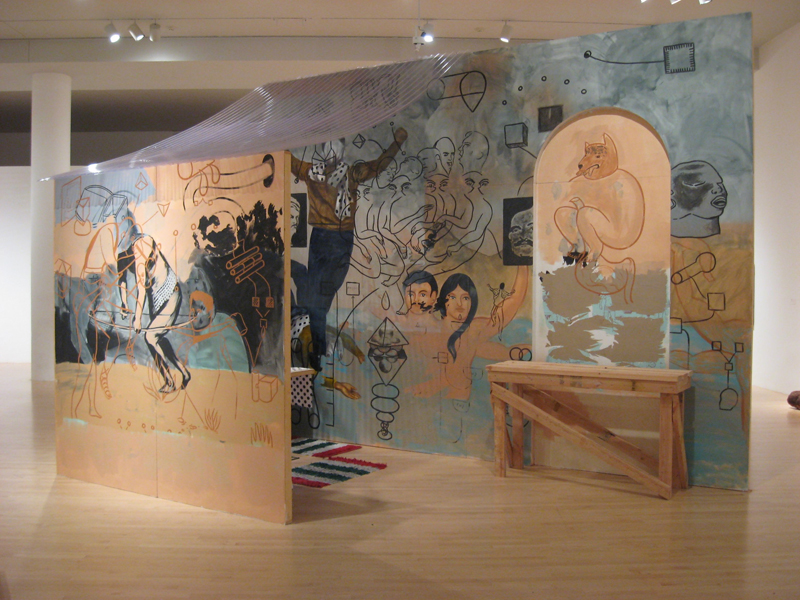 The Phantom Sightings exhibit later traveled to El Museo del Barrio in New York City and the Contemporary Arts Museum in Houston, as well as to Mexican museums in Monterrey, Mexico City, and Guadalajara. Ruben Mendoza described Romo’s Rended Façade installation in a review at LatinArt.com:

Ernesto Romo’s Rended Façade employs a subversive dis-identification toward the institution with another immersive structure that invites interaction. Here, the nested meta-structure, a hybrid mural/installation, is a tightly compacted mash-up of work studio, curandero headquarters, makeshift stage, and unfinished (unpermitted?) garage add-on. […] Romo’s installation pokes fun at LACMA from a permanent verge of both completion and collapse. Here, the ‘structure’ is three walls of exposed beam, layered, unfinished mural(s), and about half a roof of slanted, corrugated transparent plastic. In Los Angeles, the reference to missing fourth walls and tear-down TV studio sets is unmistakable. But despite Rended Façade’s delicate, teetering balance, when one “enters” the space and walks on the throw rugs, there is an oddly reassuring sense of safety and sanctuary. Paradoxically, the open, vulnerable space creates a buffering from the museum’s normally constricting atmosphere, a result not only of its intimate environment, but more importantly, of the encouragement to interact with it. While a video of Romo’s alter-ego, the mystic curandero/philosopher, Dr. Eufencio J. Rojas, plays on a small television, one can look over flyers for Rojas’s “Narcoquest” tour promising enlightenment (and originally distributed on car hoods and other outlets) and pick up and read books and papers on the desk (including transcribed “works” of the illiterate Rojas). Other accessible objects include a broken mirror, hanging (fake) plants, a baggie of “medicina antigua,” folded blankets under the desk, and posters. Perhaps most significant, however, are the mock museum title/label cards casually placed within the piece. Using Helvetica font on a white background, the title cards mimic museum and gallery placards with faux artist names like Antonio “Tiny Montgomery” Luz, year of birth, a title, and media descriptions like, “Chalk and saliva.” What is most remarkable about these labels, though, is that they are printed on a thick, inviting stack of tear-away notes. Like other everyday, accessible objects here, these tear-away labels undermine the fetishization of object that is the hallmark of commodified art through a constant transformation that exemplifies the processual functioning of a decolonial imaginary: Each time we tear away a label the piece transforms on multiple levels, and the process of transformation then multiplies, rhizomatically, as these bits of institutional “authenticity” are taken away. 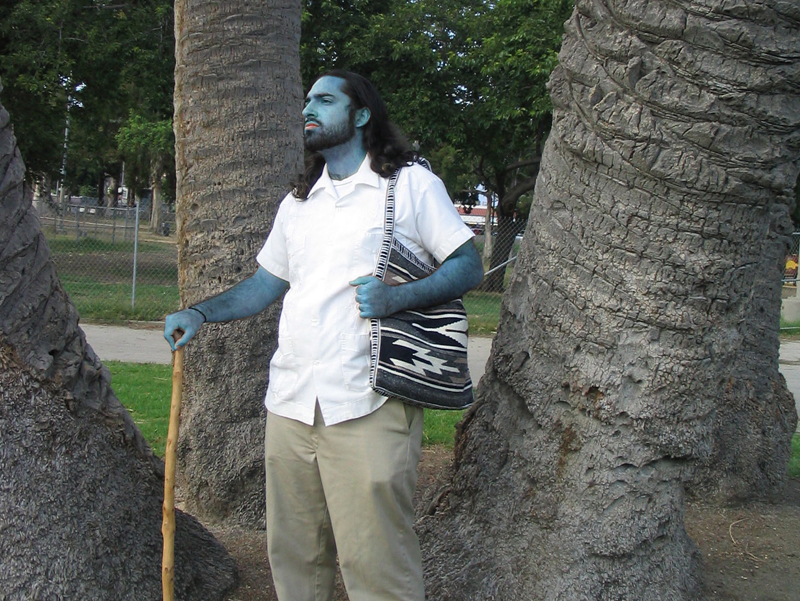 As part of his 2009 solo show, Holy Jolina!, at Tropico de Nopal Gallery in Los Angeles, Romo produced the accordion-fold Codex Jolinaus, which was given away free at the exhibit. Romo’s artist colleagues, including Shizu Saldamando, Hugo Crosthwaite, the Date Farmers (Armando Lerma and Carlos Ramirez), Willie Herron, Marisela Norte, and others, made Tropico de Nopal, run by Reyes Rodriguez and Marialice Jacob, the premiere Chicano art gallery in the US at its peak. As part of the exhibit, Romo’s Codex presents in physical format the concepts of a phenomenology of 3-D folding realities — representation versus exploration, text versus picture, fiction versus nonfiction, juxtaposition versus estrangement — folded together to illuminate and (simultaneously) overshadow. In this “origamaic” presentation, rather than relying on the multi-layered rendering of large scale palimpsest murals that formed major aspects of his installations, Romo’s pamphlets, manifestos, posters, and other publications fold and unfold in the hands of the reader. 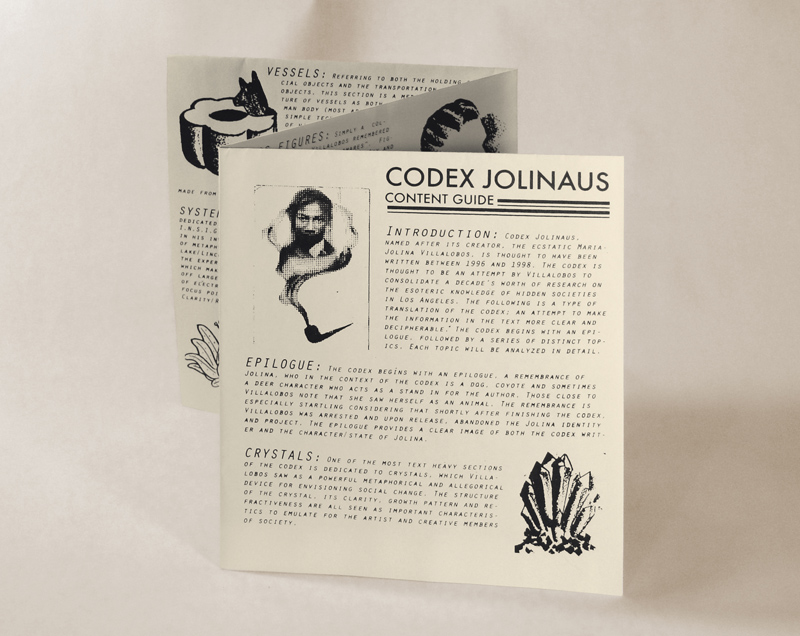 These physical hard copies not only articulate the concept, enact Romo’s perception, but steer it away from the simultaneity of a Dadaist-related 3-D collage aesthetic practiced by Robert Rauschenberg, Edward Keinholz, Jimmy Durham, or Noah Purifoy. Instead, folding at once requires the volition and participation of the viewer, emphasizing the active role of the reader as manipulator, observer, interpreter. 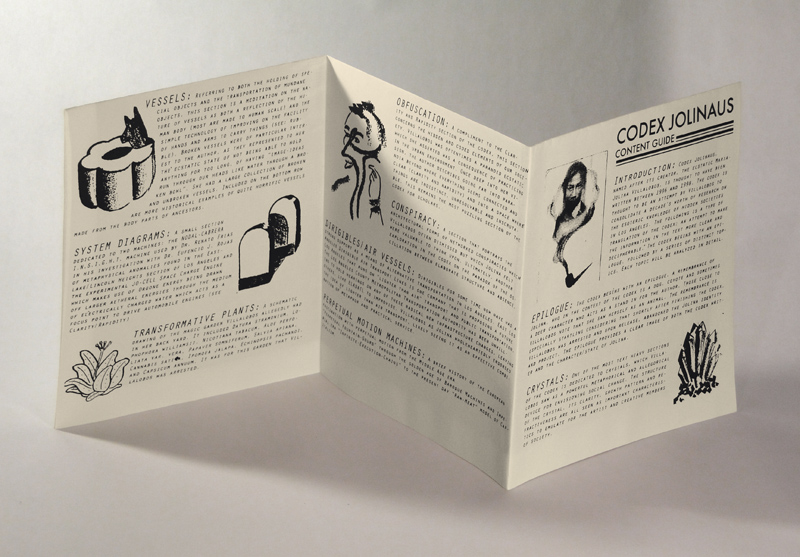 The codex format of Codex Jolinaus is a direct allusion to the more than 500 surviving pre- and post-colonial era Aztec codices, most of which involved continuous acts of translation on the part of the tlacuilo, or painter, whose work negotiated wholly distinct, but frequently shifting and overlapping, ontologies, languages, cultures, world views, and power structures. Aztec tlacuilos became scribes and translators of mestizaje. The imagery and texts of codices marked transitions through eras in flux.

Romo writes (on his website, www.allcountless.com), “The work is a dispersionary tactic — as a response to and attack against mind-numbing violence, ghostly and holistic closed systems of dog-eat-dog capitalism, with their deadening emphasis on sameness, conformity and apathy. Where that set of systems work by enforcing conformity with cruelty, this work disperses conformity with humor. The work should be like medicine sabotage — a constantly evolving and supple response to wholly synthetic and virus-like systems of waste.” 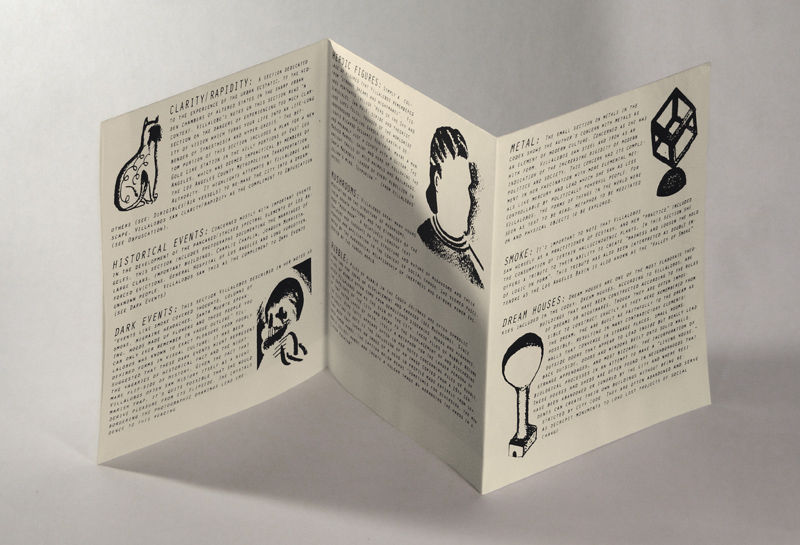 Of course, Romo’s 2009 codex also draws inspiration from an array of Los Angeles sources, including indigenous herbalism, Jack Chick-style Christian tracts, activist leaflets, rave flyers, and street ephemera. These elements evoke street culture and the life of neighborhoods; and such items, curated for their distillation of local folklore and site-specific history, find their way into Romo’s installations and populate the Open Cabinet displays. In further notes on his website, Romo adds, “So the work is a definite response to the world around — that’s important. It’s more than political, it’s holistic — and it’s more than a response, it’s tactical.” 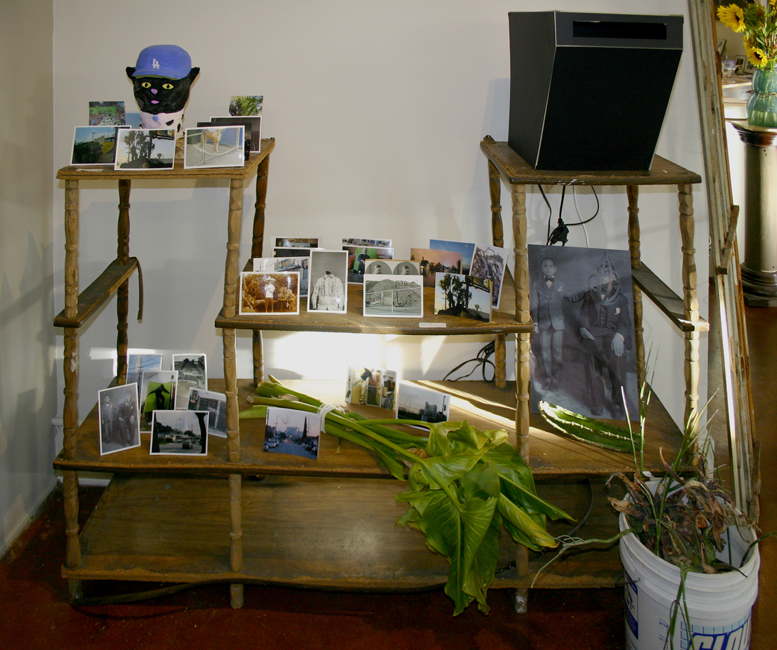 Here, too, I find more folded perception, more creased intensity, more origami of the gaze. Romo’s photographic practice is evidenced by the portraits and urban landscapes, often with Surrealist inflection, on display. Faces of people and animals, hillside foliage and gardens, both in color and in black and white, both digitally altered or printed directly from negatives, offer a prismatic and sharply inflected, folded and sometimes wrinkled panorama for the viewer, shifting as your stance shifts. On the top shelf, the black viewer offers a video in a continuous loop.

In an adjoining room, a viewer may choose to play a crisp red vinyl 45 on the record player. Viewers place the needle on the record and play it at will. The sound fills the adjoining space.

This simultaneity or chance synchronicity, sonically overleaping the exhibit walls inscribed with flamboyant, often text-heavy muralism, was resonant in tones of those “cables of genocide,” poet Lorna Dee Cervantes called them, running through the twentieth century and beyond, before Surrealists charged positivism and rationalism with genocide, via Dada’s revolt against world war and nationalism, beyond the Romantics and their rebellion against the industrial revolution, with capital (in Marx’s words) “dripping from head to foot, from every pore, with blood and dirt.” A coincidental synchronicity of the cityscape folded into the interior of the the gallery — curiously refracting glances of the city’s sullen or erased history, contending forces of gentrification, moments of resistance.

Some years later, after a spate of these installations, after several solo exhibits and the business that went with them, as well as appearing in group shows that included the 2006 California Biennial at the Orange County Museum of Art, Romo turned away from that officially curated aspect of the art scene to focus on interventions “in the community.” Instead of folding his practice inside of galleries and museums, he folded it outward onto the city at large. A frequent collaborator, I worked with Romo on a performance series he called “Recent Rupture Radio Hour.” Styled as a radio show in magazine format, we performed on stage a digitally enhanced, multimedia program (slide show, pre-recorded bits, video, sound effects) with guest artists, community activists, and the urban farmer, Reies Flores. Romo occasionally helped out on Flores’s farm, located on nearby Northeast LA hillsides of Glassell Park. The three of us, along with other artists, writers, and activists performed the “Recent Rupture Radio Hour” in various iterations at the dA Center for the Arts in Pomona, at the UCLA Fowler Museum, at the Los Angeles Municipal Gallery in Barnsdall Park, and elsewhere. It was a “fake radio show before a real audience.” It was broadcast orally, live. 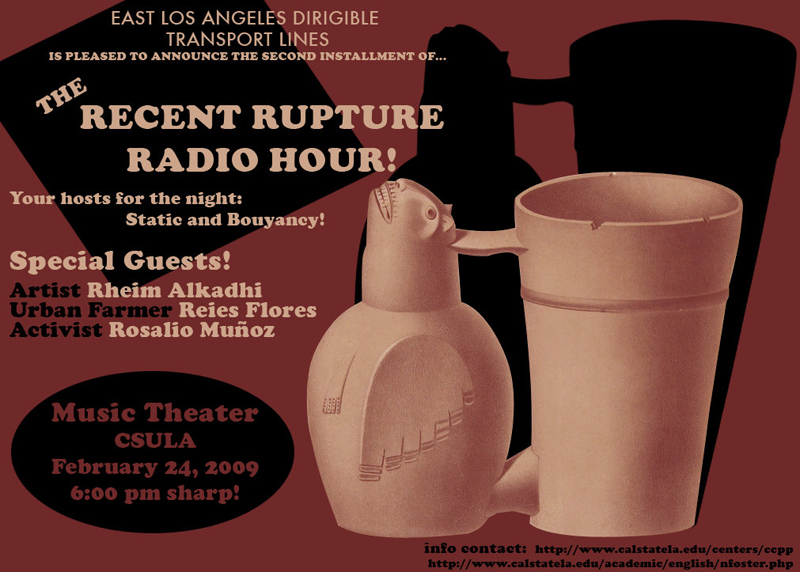 Romo continued doing occasional performances, videos, photography, and installations for exhibits at the UCLA Fowler Museum and elsewhere, as well as a public arts project with Sandra de la Loza, where they stabilized an eroding hillside on county property in East LA with native plants and granite urban Chicano stele. Romo and I also researched (via several years of criss-crossing East LA by vehicle, on avenues, boulevards, and side streets), and together we wrote, designed, and constructed a website devoted to cultural and historical sites throughout East Los Angeles, the ELA Guide, www.elaguide.org. 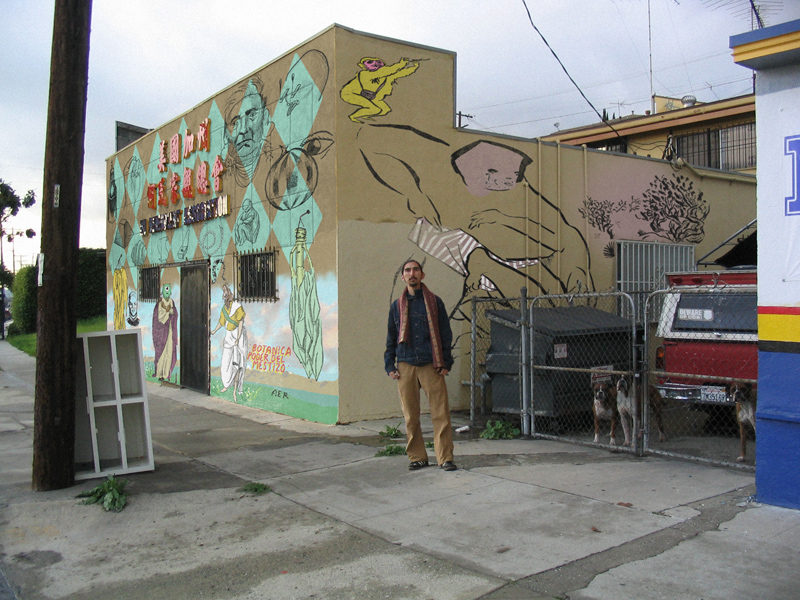 With his focus and attention turned outward on the landscape, I attached Romo’s skills as a collaborator on a novel, The East Los Angeles Dirigible Air Transport Lines (A History with Appendices), the storyline in part consisting of videos, altered photographs, audio transmissions, digital media, and other material created by him and only sporadically accessible online or during public performances. During this time he authored and self-published an artist’s book, Dr. Eufencio Rojas: Compendium of Industrial Vision by Jose Lopez-Feliu (Romo’s psychedelic alter-ego and heteronym). Passages from the publication are accessible for viewing at http://www.allcountless.com/REVUMBIO/PHANTOM/books.html. 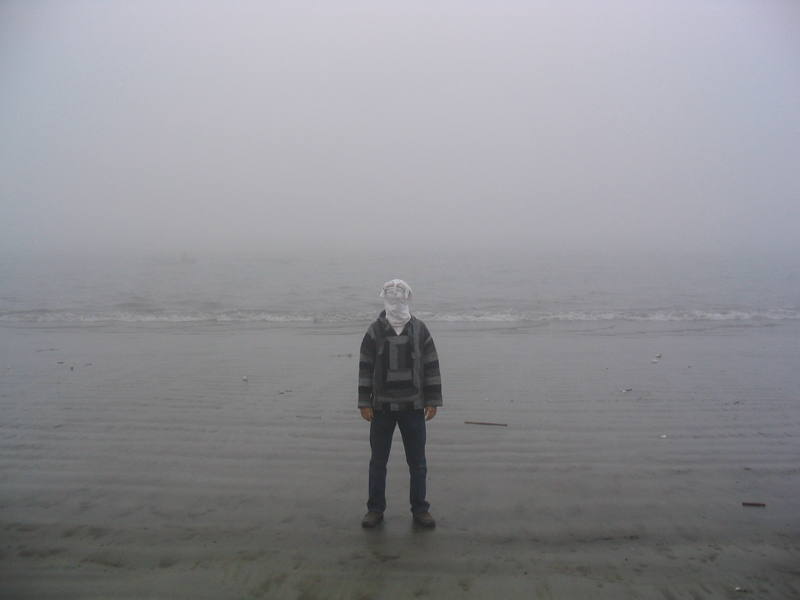 One red thread throughout the multiple performances, personas, and manifestations of Romo’s practice over the years has been Romo’s intention to abjure personal publicity and the fetish of the individual artist as creator. His publications and performances take place behind a Pessoa-curtain of heteronyms, as he operates most frequently as a collaborator or behind the scenes, sometimes through the “offices” of the anti-gentrification collective, the Northeast Los Angeles Alliance, engaging in neighborhood agitprop, street theater, organizing educational events and demonstrations. Romo’s artistic practice functions in the community, in part, as a rhizomatic, subcutaneous nerve.

One purpose of this column is to turn up the secret name behind the supposedly illiterate Dr. Eufencio Rojas and his pseudonymous spokesperson, Jose Lopez-Feliu — Arturo Ernesto Romo. We’re calling him out. More views, contrivances, and manipulations of the fold are available through the screen of a podcast, Opposable Thumbs, at http://www.opposablepodcast.com/12. And two more things. First, let us not forget to plug that other local boy made good, that native son of City Terrace, and first bionic Chicano President of the United States (currently in the race for governor, but already planning for the future), Antonio Villaraigosa:

Lastly, as Dr. Eugencio Rojas and Jose Lopez-Feliu and Liki Renteria and Arturo Ernesto Romo would have it, you may print out the following zine, at full size, 8” x 11”, fold three ways, and fold your own to take away. Fold and go! 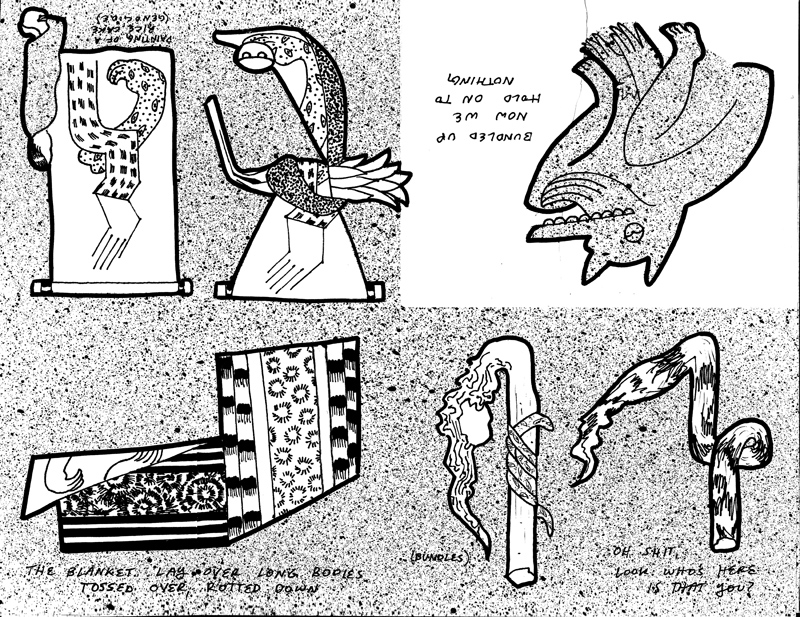