Trauma is a Memory Palace with the Roof Blown Off 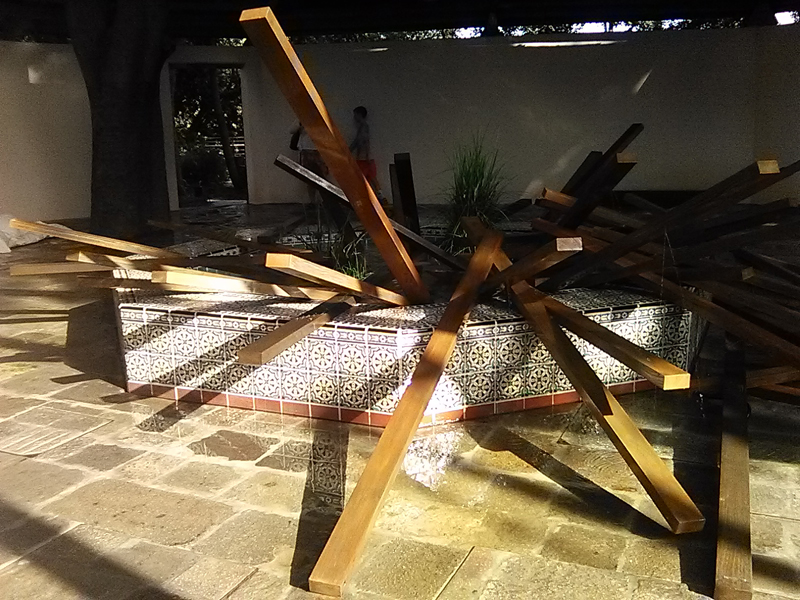 One arrives in the heat of the Mediterranean summer at the Canadian Pavilion and finds a saturated stage set, a memory theater. One feels one has been here before, except in a part of San Francisco which replicates a Mediterranean town — the Italian quarter, North Beach, where the San Francisco Art Institute nestles upon a steep hill. Canadian artist Geoffrey Farmer was an exchange student there in the 1990s and rebuilt the school’s fountain here in Italy, a ridiculous ejaculate of water tossing high into the trees of the Venice Biennale. One watches children and tourists — who moments ago were fashionable, travel-resourced art lovers and professionals — laughing and cooling off. Water is everywhere! At odd intervals, the exuberant white jet flies willy-nilly through the hole in the roof of the pavilion. Its jouissance defiles and defies decorum. Water also shoots in thin spurts from the ground, from a rigged plant, from the trunk of the single tree somehow, and from a mad cuckoo clock which echos Vancouver’s Steam Clock, a history fetish object in Farmer’s hometown. Water razzes people, touches them, plays with them and cools them off — a tactile, comedic aesthesis. One ventures outside to gather oneself in front of the artist’s statement, and as one reads, one is tickled or kissed by a tiny rogue spurt of water.

In approximately thirty days, one will be back in the Bay Area reading Chris Kraus’s brand new autobiography of writer Kathy Acker, “So there were two I’s in the book, the I without the parentheses and the I within the parentheses.” At a party in Vancouver approximately ten years prior, Geoffrey Farmer will have recounted what it was like twenty year prior to that, to sit in Acker’s San Francisco Art Institute classroom as her student as she strode into the classroom and put her boots up on the table. One has imagined the moment many times with jealousy and lust, too young to have been among the tattooed “wild girls” Kathy admired, who showed up to class on motorcycles.

Two days after walking through the Canadian Pavilion, one will meet cousin Miriam for lunch in Berlin. Miriam’s grandfather perished, she will explain over Niçoise salads, in a camp in Siberia where he was deported after the family’s protective Swiss passports were nullified under Hitler’s regime. Her grandfather died before Miriam’s birth and her own father (who as a child, depending on who you ask, either stayed on a farm on the outskirts of Berlin, or hid in a forest for the balance of the war, and whom one’s own grandmother unsuccessfully tried to bring to safety) felt perpetual trauma over the absence of any site at which to mourn. Forty years prior to the lunch, a child Miriam will have solved this dilemma. In a dream, she finds her grandfather’s body. In the days following the lunch, one will consider getting the grandfather’s name tattooed on one’s arm where the internment numbers went. A monument, a marker, a plaza, a pavilion. Memory is vernacular, and it follows that history is the memory of the State. Outside the Canadian Pavilion whilst kissed by a funny little spurt of water, one reads, “the struggle for the removal of the Canada sign; if it is still on the front of the pavilion, I lost.” Thirty days after the lunch, one will pore over the family tree to discover that in order to get the tattoo, one will have to settle on one of the four disparate spellings of the family name.

Twenty years prior, upon reading Beckett for the first time, one will have dreamed about death. In this dream, death is a grandfather blown to pieces at the side of a road, a body become matter. Inside the perfect replica of the SFAI fountain, there are seventy-one replicas of the seventy-one planks of wood which flew off the artist’s grandfather’s lumber truck at the time of his deadly 1955 collision with a train. The artwork is called A way out of the mirror. It is a line from Allen Ginsberg’s poem “Laughing Gas,” appearing in Kaddish and Other Poems, 1961. An excerpt by this anti-monumental poet appears at the entrance to the installation in austere raised bronze. Nearly the whole top of the Canadian Pavilion has been removed in the making of the piece, and upon feeling one’s own inherited trauma to be finally fastened to a place, a name, one postulates, “trauma is a memory palace with the roof blown off.”