To Live and Fade in LA 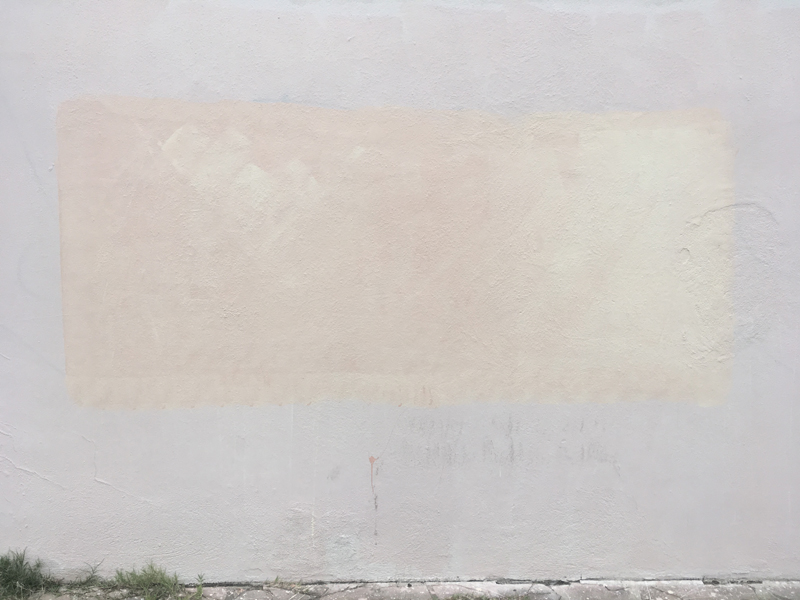 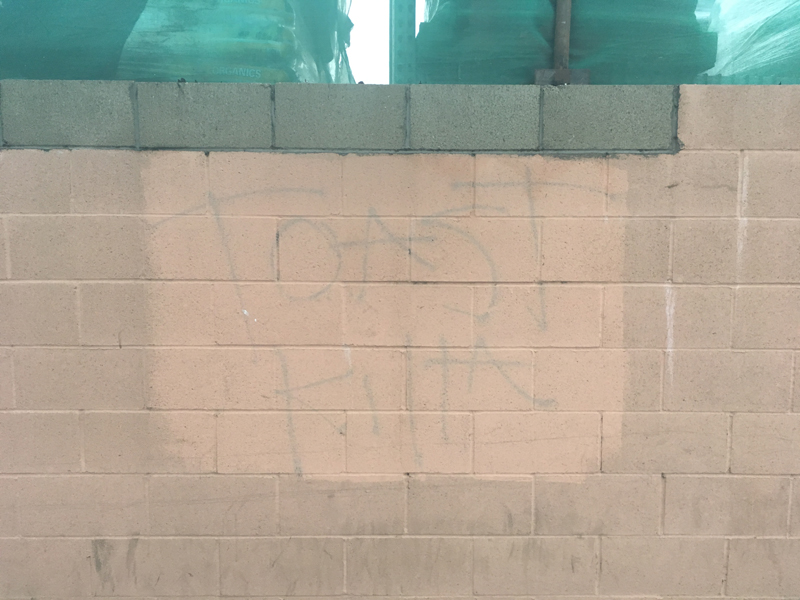 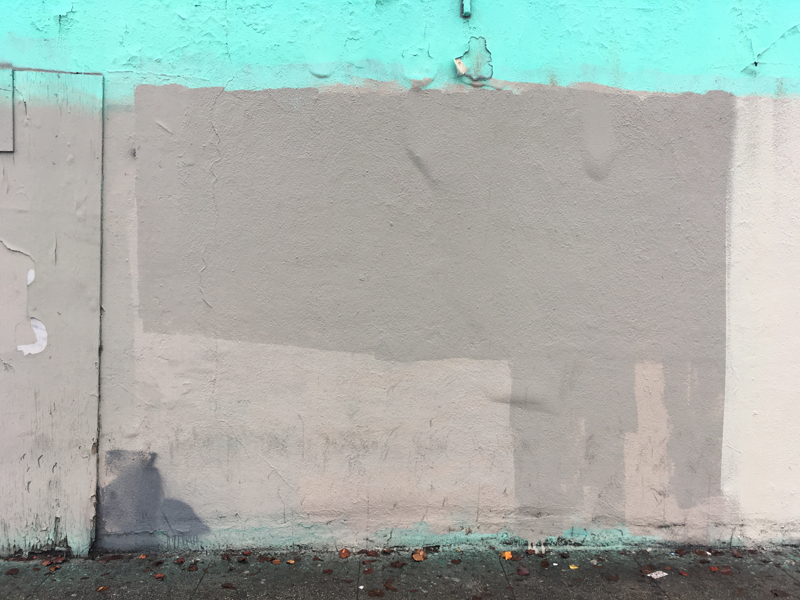 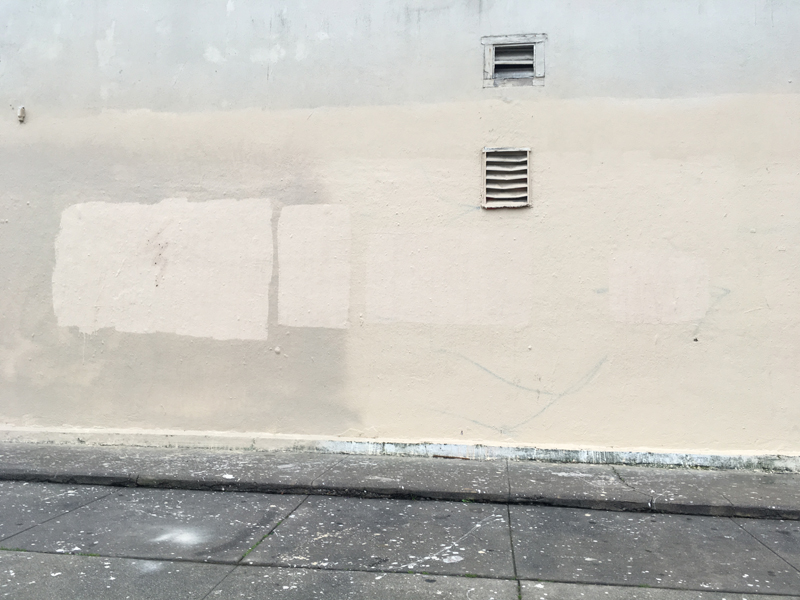 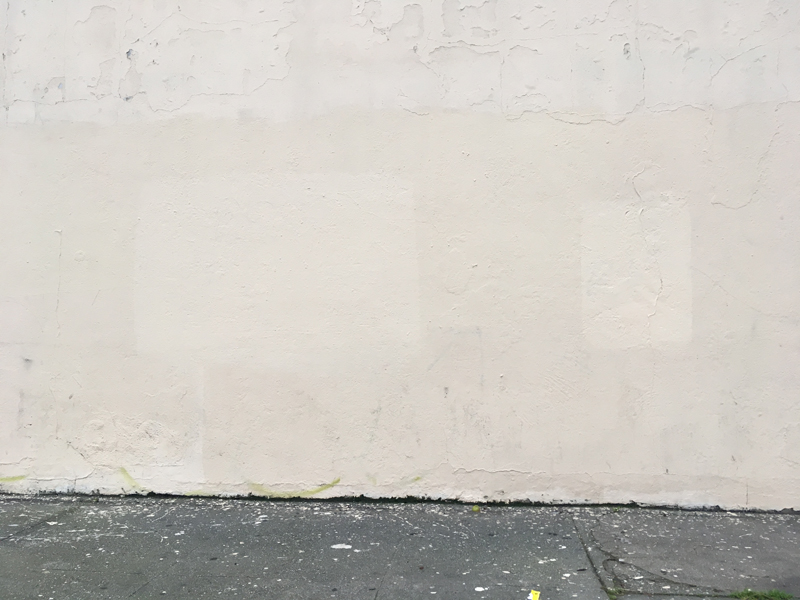 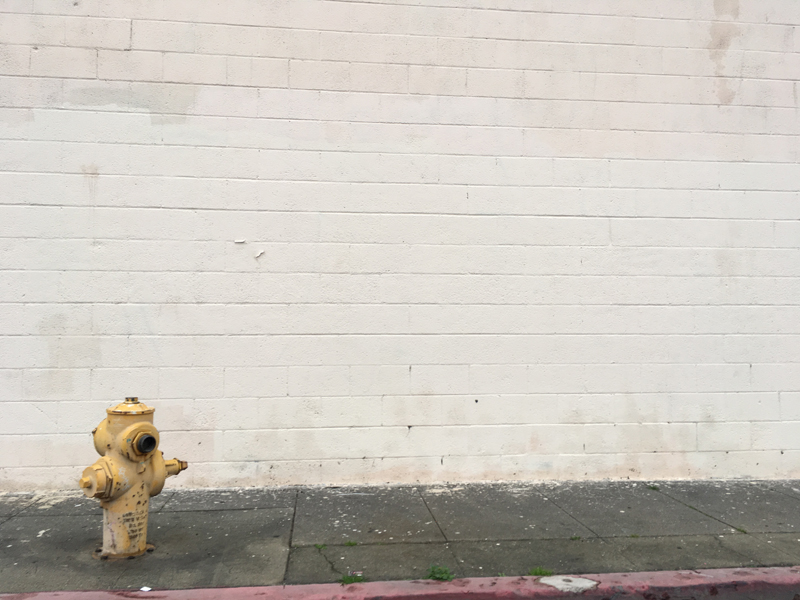 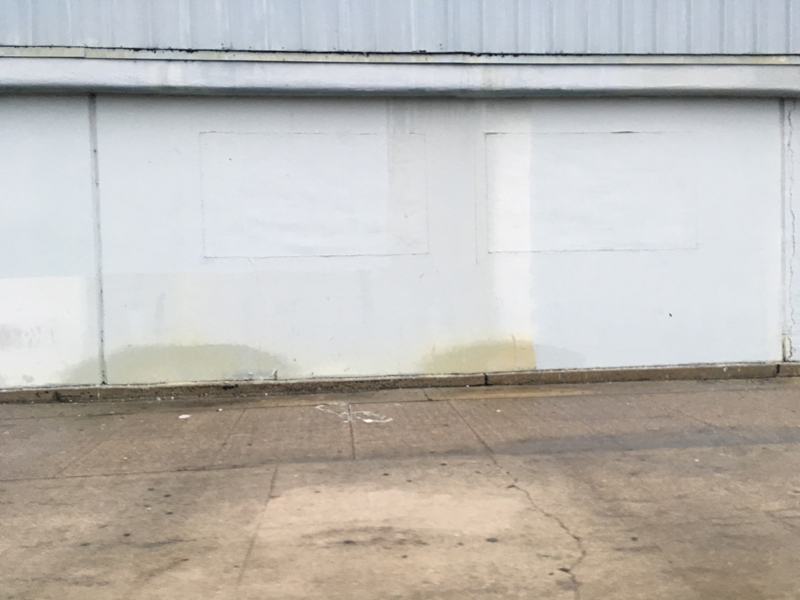 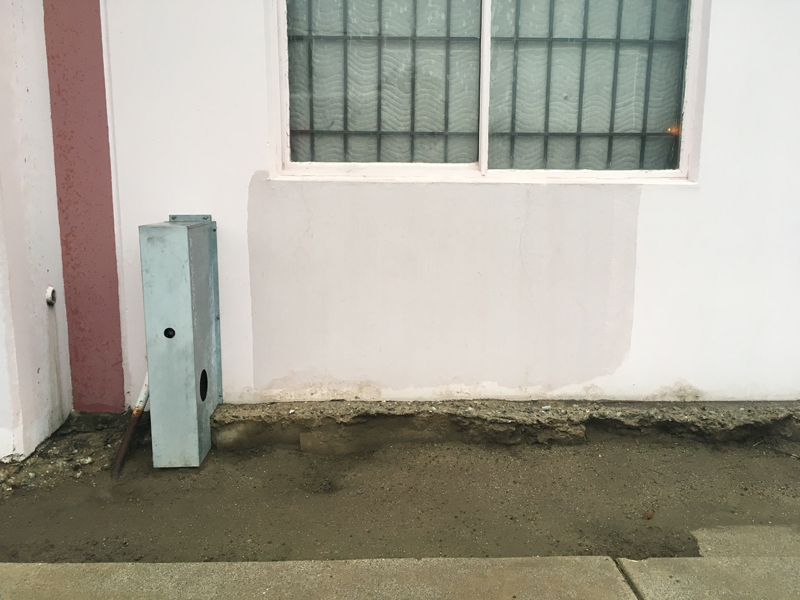 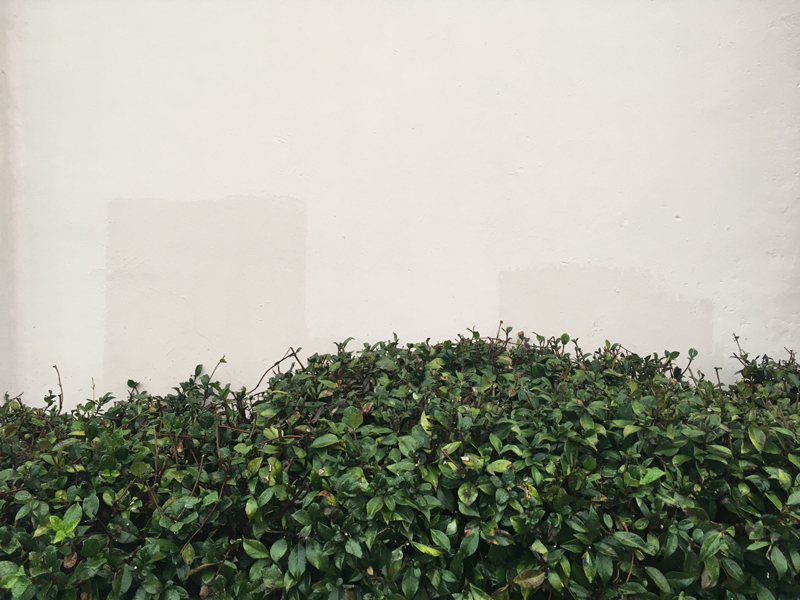 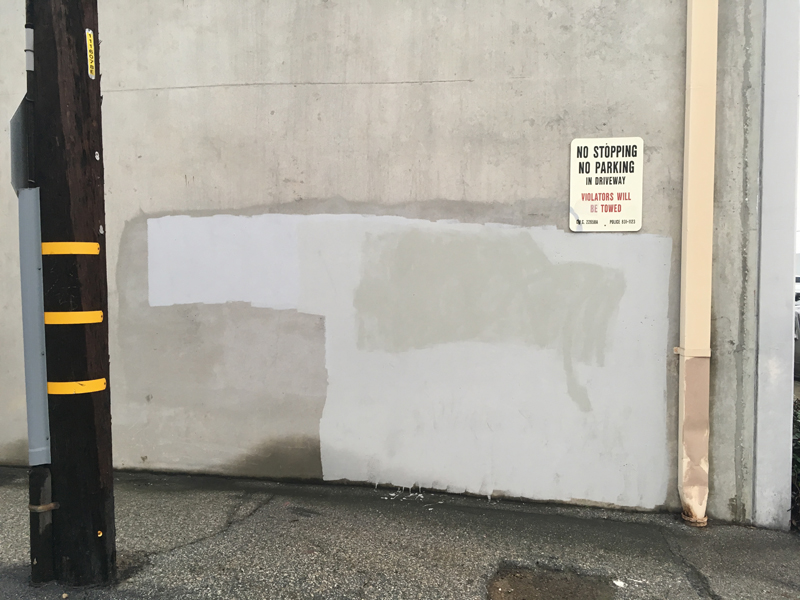 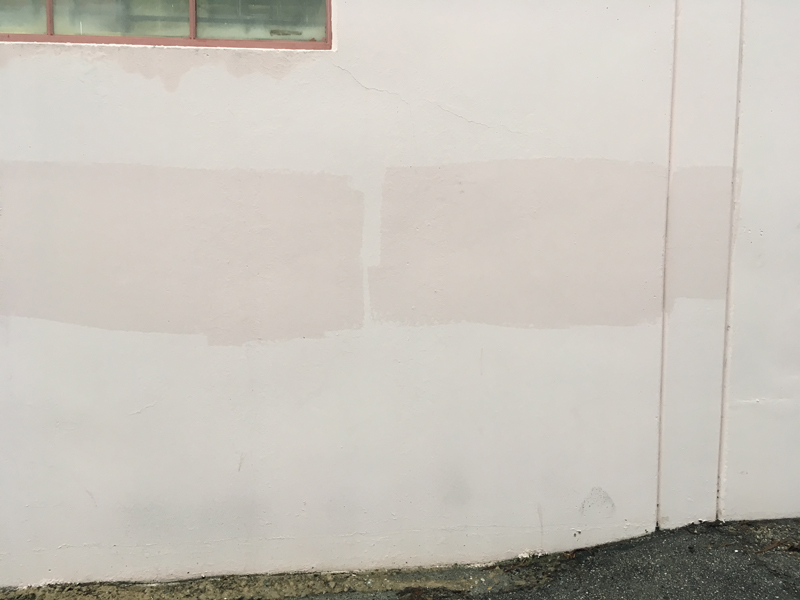 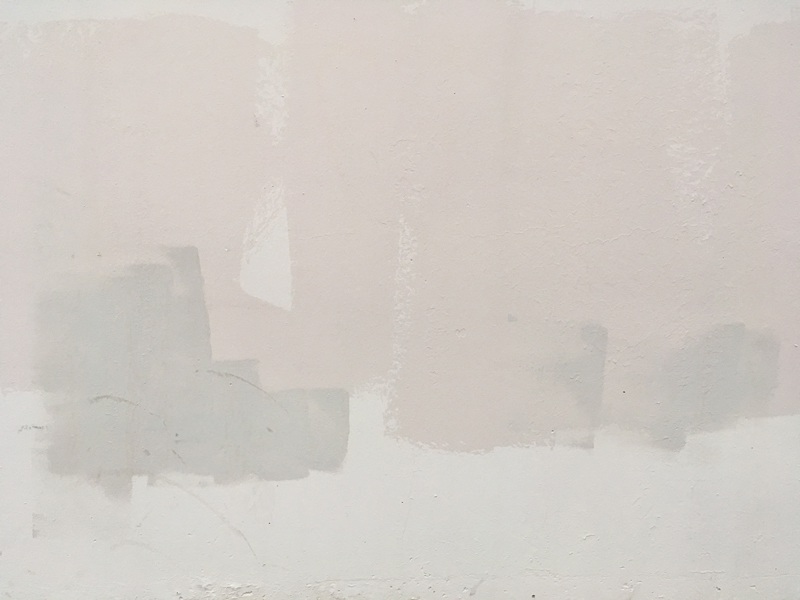 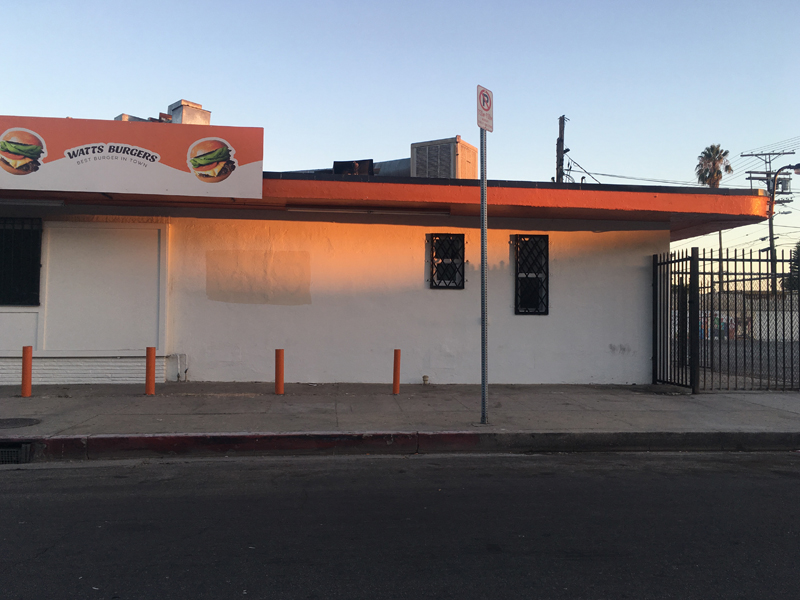 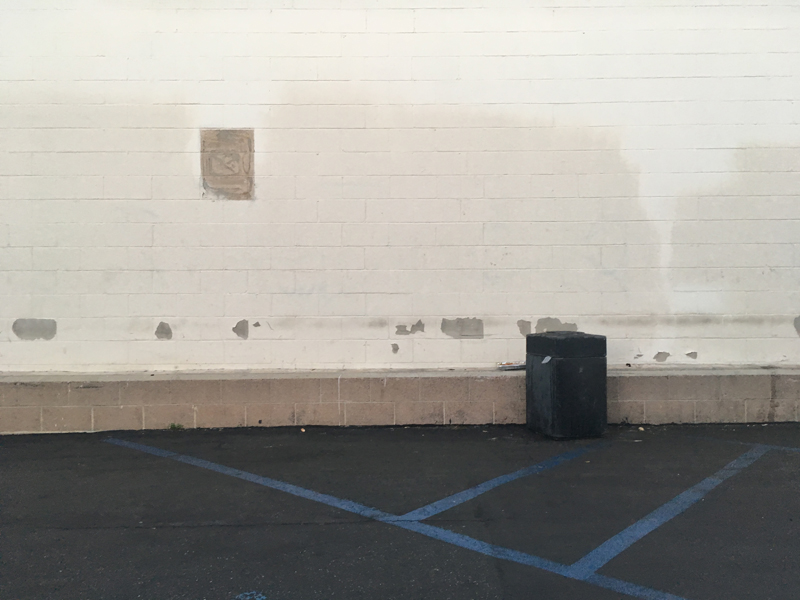 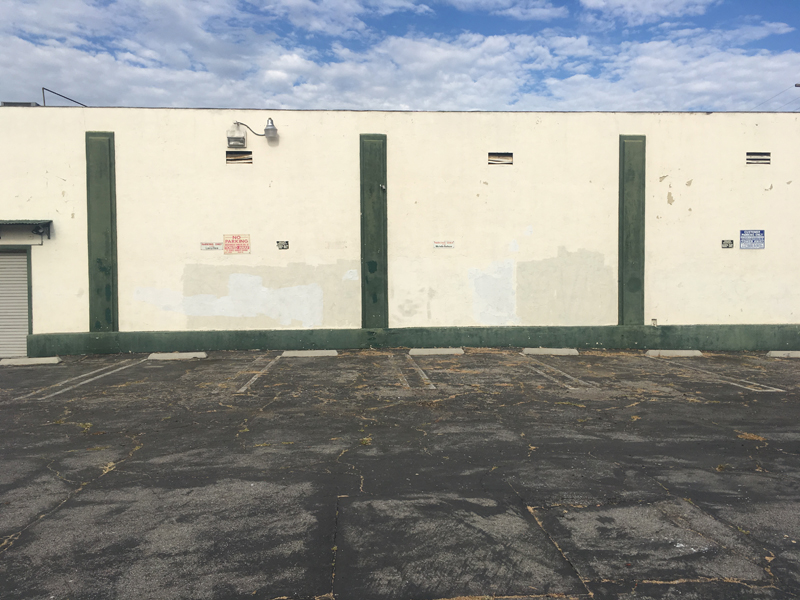 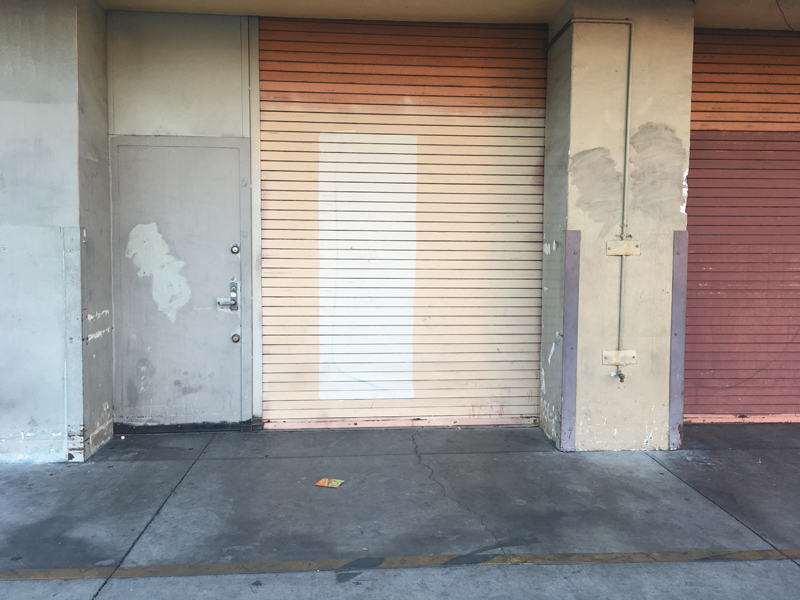 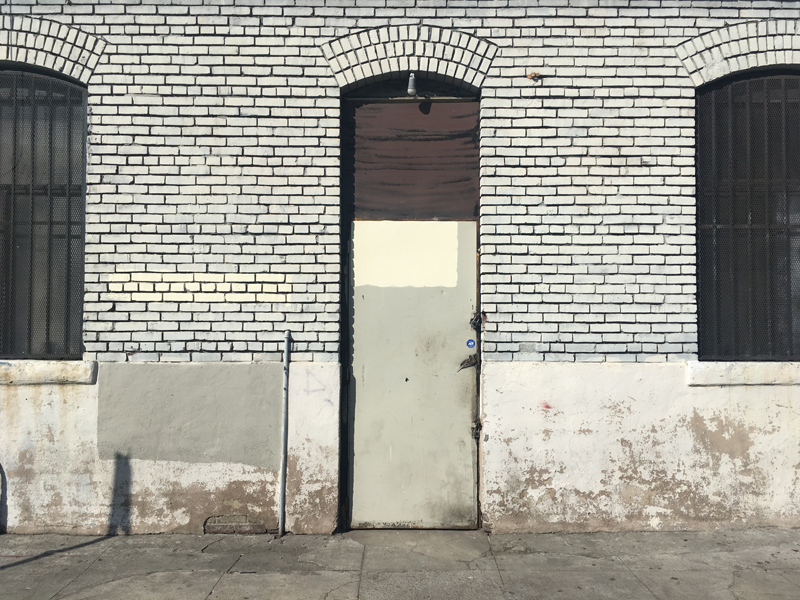 When I worked as a museum guard, I spent a lot of time looking at the same paintings. A coworker taught me a trick: think about food. Specifically, she told me to think about French fries: their texture, grease, and salt on my tongue. I followed her directions while I shifted my weight from left to right foot on a hard marble floor, staring fervently at an untitled Joan Mitchell. When Mark Rothko said, “silence is so necessary,” he spoke of contemplation, of quiet. I was contemplating French fries and America. The longer I looked, the more I saw.

My relationship to the act of looking at city surfaces started when I let my driver’s license expire and failed to renew it. In having to walk, I suddenly saw a parallel city, one hiding in plain sight. The longer I looked, the more I saw. Los Angeles unfolded like a Joan Mitchell painting.

What I noticed most were the floating marks of graffiti abatement. Ubiquitous, ephemeral. Cloudlike.

Juan Reinoso is mostly a painter. His company, Urban Graffiti Enterprises, is contracted by cities throughout the Los Angeles area to paint over graffiti. Ari DeChellis, the graffiti abatement program manager at the County of Los Angeles Department of Public Works, says he’s the best in the game. When I visit her Land Development Division office in Alhambra, DeChellis says Reinoso will talk my ear off. I want to hear about the paint. An email from Reinoso’s office reads, “It isn’t about the paint. It’s about the technique.”

To those tasked with its removal every day, graffiti is considered a nuisance. Not street art, not murals, but graffiti. Reinoso knows he’s a buffer, knows he’s seen as the enemy. But after thirty-three years, he is as familiar with the world of graffiti as a tagger. In a day, a contractor’s body follows the choreography of a graffitist: climbing under freeways, laddering up bridge abutments, tiptoeing across billboard scaffolding. Messages that are racist, violent, or include murder codes are given higher priority. “R.I.P.” notes and memorials are left up longer. “Usually until the flowers die,” Reinoso says.

Concrete, block, brick: Porous surfaces require pressure washing, steam cleaning, or an abrasive blast. Glass, metal, baked enamel, and tile are treated with a solvent. Painted surfaces, like walls, are curtained with an additional coat of paint. New cities, like in Orange County, are full of porous surfaces and are wiped clean, while cities like Los Angeles, Compton, and South Central trace their tagging history through layers of paint.

Abatement has produced a vast spectrum of variations on gray and tan. Paint is nicknamed if it’s used often. “West Rivers Gray” is significantly different than any gray used in areas below the 60 freeway. “The Narrows Beige” was poured all over the river channel during a season of open construction in Glendale, “Tawny Beige” is a common hue. “Slumpstone,” “Sandalwood,” “Fawn” are regularly splashed on sound walls, on overpasses, on sidewalks.

When Reinoso began working for the sole graffiti removal service in Los Angeles in the mid-1980s, only four stock colors were available. Contractors would chip paint swatches off the offending walls, ferry the stack to the paint store, get the exact color mixed, and three or four days later, return to the site and paint over the graffiti. If they couldn’t take a chip, they’d flip through a fan deck to find the closest color. “It was an archaic way,” Reinoso says. So behind his bosses’ backs, and to keep himself busy, Reinoso, then twenty-one, concocted formulas of colorants mixed with a tinning machine in the back of the shop. His innovation reduced turnaround time from a week to forty-eight hours and became the norm. He color-matched in the field and mixed paint on-site; ten gallons could cover forty jobs.

The closer the color match, the harder it is to locate the original site. The longer you look and as your eyes adjust, the contrast simmers forward — like looking at a Rothko (it’s no surprise that graffiti abatement is frequently compared to Color Field painting). The message concealed but present. The message written in invisible ink. The message rubbed out. The message left up on Central Ave., on Long Beach Blvd., long enough for people to read it. The message received and redacted.

In the late ’90s, a device called the Spectrophotometer, a stud-finder for paint color, made the rounds through contractors’ offices, but could never get the color quite right. “There is still no replacement for the human eye,” Reinoso says. He once commissioned someone to tag a wall as an example for a promotional video and was blown away by the kid’s ability to imagine something that wasn’t there; the eye that sees how paint can be mixed, he says, is the same eye that envisions an entire wall (as in a tag). It’s the same eye that can be trained to see, really see, in a museum. 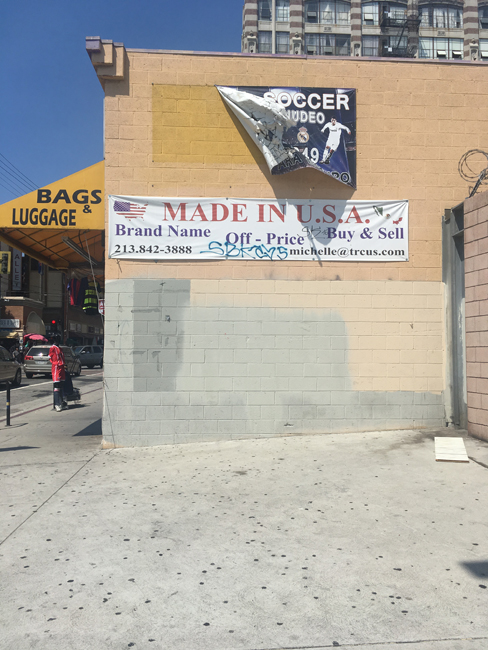 Art historical narratives about graffiti typically start with an allusion to the cave: the metaphorical writing on the wall. Who knows whether that early mark-making was ever as contentious as contemporary graffiti has been? Where some see gang activity, others see a vital American art form; within these black and white positions, abatement either equals beautification or erasure. But the reality is more complex; depending on the area, the community, and the type of removal being performed, the implications shift. It’s an issue being continually untangled, as often as walls are painted over and tagged again throughout southern California; soundless and crepuscular conversations.

When I stop and stare and wonder about all of this, I think of something Jane Jacobs wrote: “The ballet of the good city sidewalk never repeats itself from place to place, and in any one place is always replete with new improvisations.”

In looking, and looking, and looking again at what is evident and then disappeared, the machinations of a city’s social infrastructure become visible. The city is like a museum, a room for seeing. The unexpected art of our interactions — the improvisations, processes, and exchanges — appear, rising like blush to the cheek.