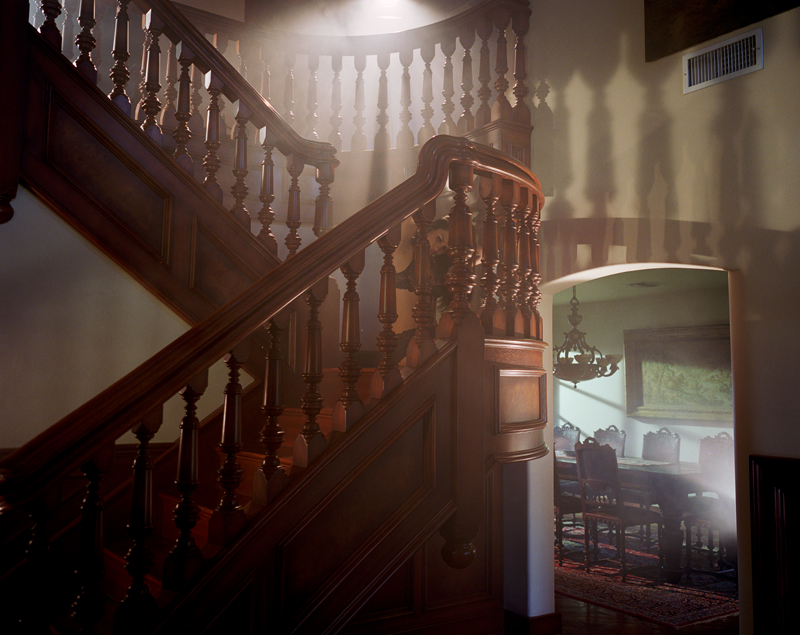 Every day in my suburban tract house begins and ends in stillness and half-light. I linger on the threshold between wakefulness and sleep in the one place where I persistently find, sheltered together, memory and imagination. Such is the stuff that my daydreams are made of.

The best of these take place in a room with furnishings and some light, because there will be shadows in the daydream and some ambivalence.

In speaking about the photographs from The Valley (of which this is one), Larry Sultan said that his ambivalence as a spectator — the shadow in his daydream — formed a “rich and fertile field that stretches out between fascination and repulsion, desire and loss.” He said of those implicated houses, although he had never lived in any of them, “I’m home again.”

I often daydream of houses, and I think Larry Sultan did too. Gaston Bachelard, the French philosopher of the spaces of our lives, insisted that daydreams of home — of any place of desire and loss — require shelter. He also said, “to be housed is to dream.”

Porter Ranch Road, 2003 might almost be an annotation to Bachelard’s The Poetics of Space. As Bachelard believed, as Vermeer showed and as Larry Sultan shows, a home is both a body of images and an anticipatory space. Every house contains a daydream of its future as much as a memory of its past. The chair in the vacant room improvises a sitter; the doorway, a hesitant trespasser; the staircase, a trysting couple, and above them, a bedroom, a bed.

As much as we might try — by critical analysis or real estate speculation — no house is ever entirely disenchanted. We feel the house in this photograph is haunting itself, just as all houses, when temporarily empty, are haunted by themselves. We might also say that this corridor, staircase, and inner room persist in dreaming for us when we’re away, when we remember again those places in a house we knew or think we knew.

In his practice as an artist, Larry Sultan wanted “to do something that was complicated and dark, but also tender.” He kept coming back to his dark and tender memories, an elegiac nostalgia almost too naked to witness. He said, “I’m still caught in longing for that same utopia my parents were longing for by coming out West,” where, through their home movies, they had “dreamed up” a life. Larry Sultan used his longing and his tenderness and his voluptuous daydreams of domestic space to unsettle our image of the suburbs that had been his boyhood home.

He said, “I want to investigate the stereotype of the suburbs and complicate that stereotype […] make it a richer field […] something that isn’t filled with assumptions about generic lives.” It’s true, regrettably, that the suburban everyday is thought to be empty of what someone might fall in love with. Fetishize — yes. Observe voyeuristically — yes. Encounter as pleasantly uncanny — yes. But not fall in love with. And yet, the swarm of ambivalent feelings that hovers over the homes of the Valley is enough to answer someone’s desire and to be cherished in someone’s memory, despite what we know or think we know about this particular house. Reverie allows us to inhabit even contaminated spaces.

“For me, the suburban house contaminates and complicates pornography; it’s not pornography that contaminates the house. […] For me, those houses are stained already, by childhood memories and cultural fantasies.” As much as they are “fixations of happiness,” the rooms of every house are containers of shame, of the shameful things we never — or rarely — do in public. Was there ever a house that was not the scene of some secret crime?

Just as Vermeer did, Larry Sultan made it possible to observe the commonplace without knowing exactly what’s being seen. He said that he scanned the everyday for traces of moments “in which you get to see without knowing what it is yet.” He said, “I think those are the rare moments of seeing.”

The cynic (or the stoic) might assert that everyday life is just one damn thing after another. Sultan’s reply was wonder. He was endlessly fascinated with “the daily, with the everyday, with the mundane, with the provocative that resides within.” The intimacy of the everyday marks the art he made; his photographs resist our “regime of speed.”

The regime tells us to lighten ourselves of the things that remember us, and to forget that those things are so much in need of our own remembrance. Your home may be all that you ever know of the timelessness of space, of the embodiment of daydreams, of simply “being” as a value.

Larry Sultan‘s photographs remember that home — however provisional — is the place where we are destined to find love and hope. Bachelard would agree. He wrote that, “memories of the outside world will never have the same tonality as those of home and, by recalling these memories, we add to our store of dreams. We are never real historians, but always nearly poets.”

The writer Barry Lopez spoke of this moral capacity and how his childhood home, also in the Valley, served his need for it. “If you’re intimate with a place,” Lopez wrote in LA Weekly, “the implication that follows is this: the place knows you’re there. It feels you. You will not be forgotten, cut off, abandoned.” Places of lived experience, embedded in habits and in memory, accompany us, who are destined in the end to be solitary wayfarers.

I don’t know why my home remains adequate to my desire. I can’t imagine it satisfying more sophisticated critics or consumers. It’s only the skin I won’t slough off, the familiar story I want to hear again, the memories that give me shelter, and the vulnerable body into which I welcome myself each day.

Larry Sultan spoke and wrote about his practice and his aesthetic brilliantly. The quotations in “An Enchanted House” are from interviews conducted over the course of his career. These are collected at the Sultan website.