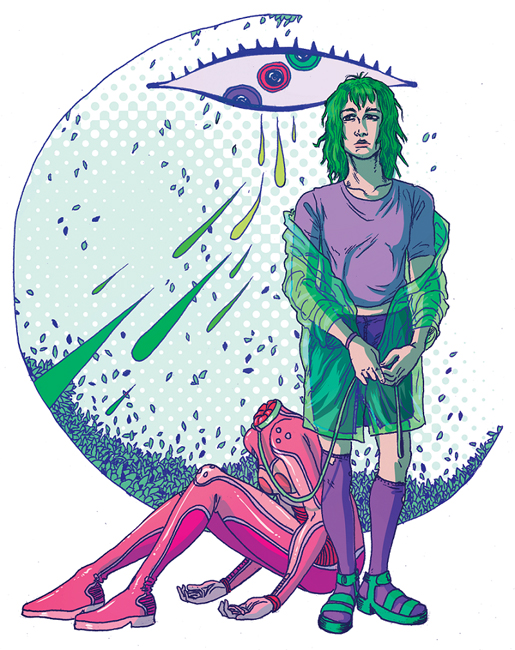 Porpentine Charity Heartscape is waiting at the entrance to the apartment complex she lives in near Oakland’s Lake Merritt. In the planter outside the concrete fortress, there’s a single bird of paradise flower covered in black spots, as if rotting from some mysterious disease. Porpentine skips toward it and touches her finger to its sharp, orange tip. “I love these flowers, they’re so alien,” she says. “This one’s goth.”

Porpentine is known primarily for her works made using Twine, free software that easily allows its users to create hypertext fiction — narratives in which the language comes alive as a web of linked pages that readers navigate, almost like a choose-your-own adventure book. 3 She builds worlds that slither between sci-fi, dystopianism, fantastical critiques of capitalism, mental health discourse, and conceptions of femininity. Those she engages are both readers and players, active protagonists deciding the form of the story as they choose the outcomes of mutable scenes.

Hypertext fiction had its initial heyday in the ’90s, when early adopters, intoxicated by the seemingly utopian possibilities of the internet, believed that non-linear writing would revolutionize literature. But the genre instead dwindled; as author Paul LeFarge retroactively mused, although the structural idea was interesting, the stories mostly weren’t. Perhaps that was because digital storytelling was still in some ways beholden to the rules of literary tradition; the release of Twine in 2009 invited creators who were neither trained writers nor game developers to reimagine both how to tell stories and the elements that constitute a story. Today, Twine is its own medium, with its own malleable poetics of immersion. 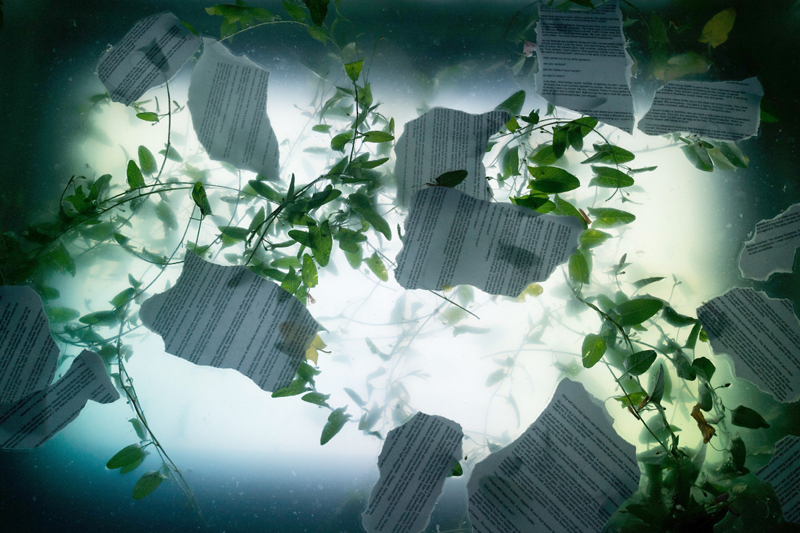 Porpentine was kicked out of her home at fourteen, and struggled with unstable housing for many years following; she used Twine to build another home online. “The tools were available to me, so I started making things,” she says. “The rest was an accident that turned into me trying to get my friends healthcare and rent to keep us safe from such things as afflict people like us.” (These days, she receives $770 a month through her Patreon account.)

Porpentine’s inventive Twine techniques have earned her a devoted following in the world of independent 4 videogame development — a prolific but slightly obscure subculture that manifests mostly online. Her first acclaimed creation was Howling Dogs, a 2012 playable fiction that places the player inside a dank cell with access to a “sanity room,” where intoxicating screens provide a measure of relief from the repetitiveness of daily survival. “That was the first one I made that had the pop culture appeal of being trapped in a dark room with only a glowing screen,” she says, smirking. “Everyone gets that.”

In the years since, Porpentine has cemented her seductive, pulpy style. The surreal settings of her work vary, but warped visions of violence and grimy cyber-eroticism are typical excretions. 5 In Miniskirt World Network: Business Slut Online (a collaboration with Neotenomie), high-powered executives perch atop high-rises and connect with each other through networked miniskirts. To weave an image of the universe in their minds, readers must grasp at the details that are offered: The dried blood splattered in the elevator from “last week’s acrylics fight,” and the “Dome of Serenity” in which baby anemone flourish in “brooks of undulating tendrils.” 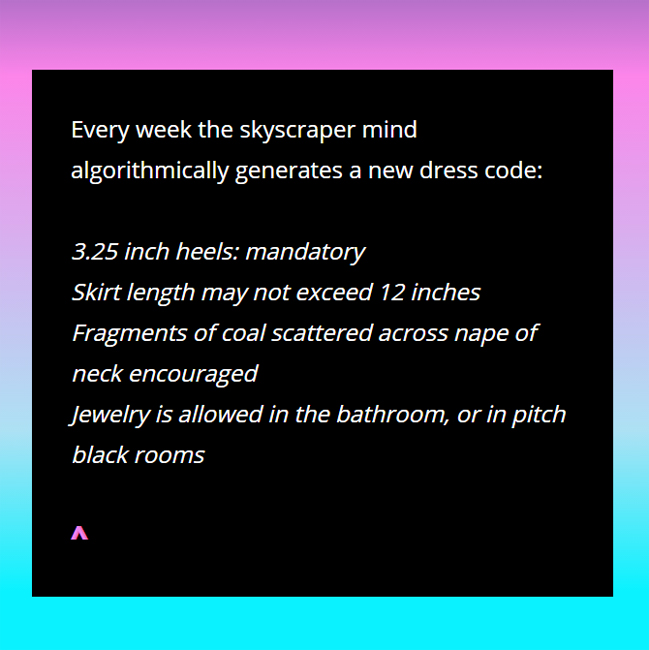 Over the last few years, Porpentine’s work and influence have seeped out of her online niche and into the fine art sphere — a realm from which she seems less interested in receiving artistic validation than new avenues for funding her survival. In 2016, she became both a Creative Capital Emerging Fields and Sundance Institute New Frontier Story Lab fellow, and a number of her Twines were included in the 2017 Whitney Biennial, making her the only Bay Area artist represented.

Last year, she released Psycho Nymph Exile, a Rhizome-commissioned novella that uses (sometimes pages-long) footnotes 6 to mimic the nesting capabilities of Twine. 7 The sprawling romance features two teen heroines who live on a post-apocalyptic planet where nearly everyone suffers from “DSTP,” 8 a mysterious, venomous substance that surges through the body in strokes of sudden agony, slowly mutating the immune system. Destitute and frequently antagonized by the gigantic soaring beasts that rule their world, Vellus and Isidol attempt to endure together, finding mutual affection in their shared trauma.

At the heart of the story is a critique of the ways that the violence inflicted upon women becomes disconnected from its chronic effects — leaving survivors to fend for themselves while abusers continue to terrorize — and the ways in which those haunting, invisible symptoms are continually discredited. In a chapter called “Causes of DSTP,” Porpentine writes, “It seems entirely random. An innocent enough rape could be occurring when a beam of light falls from the sky and strikes a women in the head, irradiating every cell of her body.”

Trauma is “this wound that the world’s not really ever going to care about, that isn’t really verifiable,” says Porpentine, herself a survivor of abuse. “It’s something that poisons every day of your life but is very hard, for instance, to collect disability for — to be believed about. Living with the unlivable, it carves out an entirely different, strange world that people may find incomprehensible.” 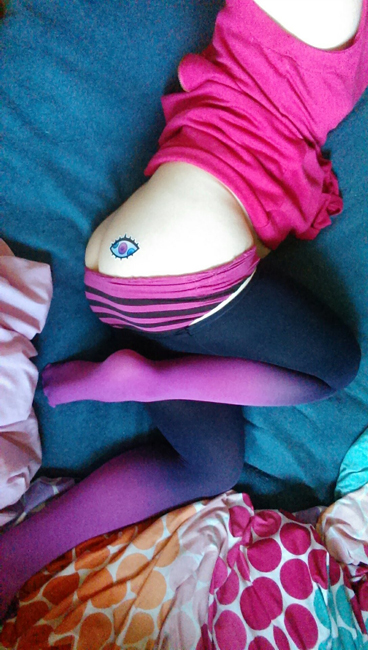 To Porpentine, creating and digesting content in fragments is intuitive — drawing from such genre-specific elements as manga speech bubbles and videogame cut scenes 9 — and she believes it’s actually more in tune with the way people engage with media today; clicking through a text game, after all, is not unlike clicking through a website or a Wikipedia article (her novella reflects a similar format). But interactive fiction as a whole, even with its idiosyncratic immersive quality, still doesn’t offer broad enough appeal to make it mainstream.

Most Twine creations remain sequestered to a small corner of the internet, likely because even those who appreciate the stories and their structures often find the frequent repetitiveness and incongruity taxing and confusing. Porpentine’s text games share those challenging traits. But what gives them a particular appeal is, in part, the ways in which those characteristics come to function as poetic devices for articulating experiences of trauma, anxiety, and mundanity, all of which are arguably catalyzed and exacerbated by our tumultuous economic and political climate. The potential for speaking to and with these experiences allows Porpentine to tell stories that — in spite of their mutant fantasies — feel more true.

“That’s just how my brain thinks,” says Porpentine, “especially when the chronic pain is so intense and the fatigue is so heavy, all you can do is mark out these tiny details — then let the field of details holistically form something that you’re not even necessarily considering.”