Every email you write is public. Sort of. It’s safe to presume that if you haven’t already been hacked, you probably will be; it’s really a question of when, and by whom. The NSA is most likely already snooping the Amazon orders in your inbox for sex cream. Robots read all of your most private conversations, the better to build a more detailed ad profile. The recent exchange you had about a beloved relative’s declining health? That helped a large corporation earn a few fractions of a penny. 1

There are of course precautions one can take, some easier to implement than others. Don’t use email (one can dream…) or never write anything sensitive over email (on the fringes of possibility…). Security like two-factor authentication is great, but unfortunately it doesn’t protect you against other bumbling people in your network. Just ask the DNC.

There’s also encryption. There are many options, but the best in terms of the overlap of security and ease of use (besides Signal) is Pretty Good Privacy (PGP); created by Phil Zimmermann in 1991, PGP got its name from the grocery store in the Prairie Home Companion (“Ralph’s Pretty Good Grocery”). Every user has a public and a private key, and can encrypt any block of text using the public key of the intended recipient. The message is converted into a lengthy string of letters and numbers for the recipient to decrypt using their private key. 2 PGP relies on strong encryption, as well as the mutual trust of the users involved. Indeed, it’s pretty good.

One of the running (and cliché) criticisms of the internet age is the loss of intimacy through convenience and abundance. The operating logic of these claims is that communication acquires more significance when sparse, or when it takes longer to send or receive. 3 Think: Scarcity economics, applied to sexts.

A handwritten letter typically carries more emotional weight than a dashed-off email or text. It likely took longer to craft; it cost a couple dimes to send; it had to circulate through the vast machinery of the US postal system for a few days. Although it’s a somewhat simplistic criticism of technology, there’s still a small kernel of truth to it.

A large portion of my ~five year relationship with Jenny Odell has been long-distance. The majority of our communication, until very recently, has been digital. This is somewhat disconcerting (see privacy concerns, cranky old man anti-tech arguments).

The process is simple enough, if incredibly time consuming. I typed a letter to Jenny on my laptop, encrypted it with PGP, then handwrote the resulting code on graph paper (it took a little over three hours, and required an intense amount of focus). I mailed Jenny the letter, she typed it into her computer and decrypted it. Then she repeated the process, typing up the code on a typewriter and sending it back to me. And so on.

Our two first letters are here 4: 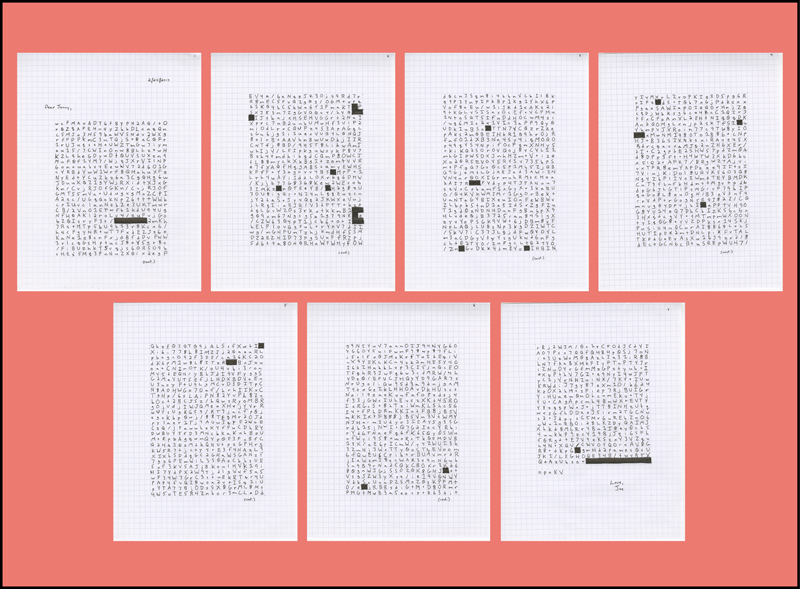 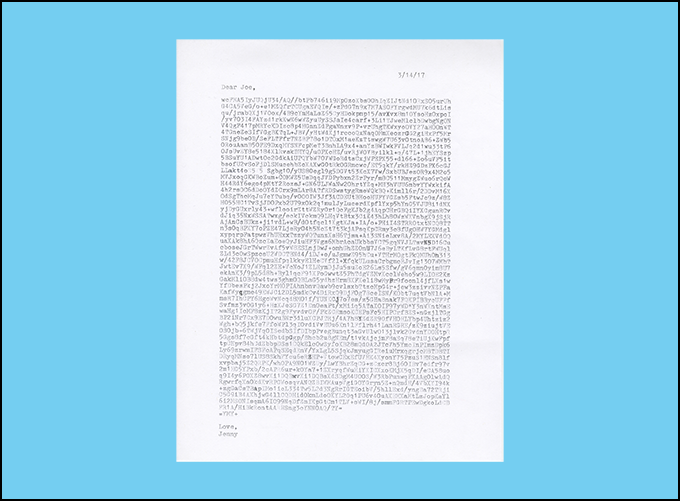 You won’t be able to read either, at least not yet. Perhaps we’ll get hacked in the near-future, or someone with a quantum computer will decrypt them; estimates suggest those should arrive commercially in about twenty years. So think of these letters as temporarily private, until some rich guy gets his hands on one of those fancy machines. If you want to read them, check back here then.

Meanwhile, look at this mess of code and ponder: Is there an ineffable “essence” of a love letter that extends beyond the written words? Can a cold block of code be “intimate”? When one handwrites this many lines of code, does it take on new significance, despite its incomprehensibility? How does the (potential) public nature of such a letter (or email, or text, or…) influence its writer? Will there be a point when, because of oppressive governments and/or corporations, all communication looks more or less like this?