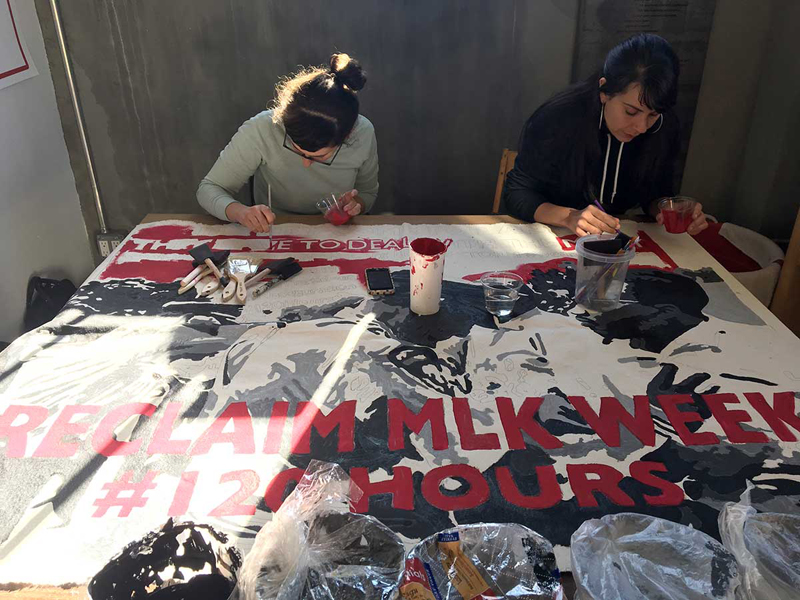 Like thousands of others, I joined the Women’s March down Market Street. Amid the chill of the rain and the beat of the chants, what stood out was visual language: the hand-drawn signs, the sashes and puppets, and those pink hats. As these crafts have become early symbols of resistance, many people have pointed out their roots in long traditions of “craftivism,” from Gandhi’s spinning wheel to the textiles and prints at Standing Rock.

Within this moment of myriad transitions, the notion of craft itself is in flux. In factories and studios, automation and digital tools complicate how we view the act of making something “ourselves.” Beneath these conversations, however, is a history of intersections between craft and digital technology going back to the analytical engine, a precursor to modern computing adapted from the Jacquard loom. Parts of this history point to the power imbalances laid bare in moments of transition. In the 1960s, for example, Fairchild Semiconductor recruited Navajo women for low-wage work producing circuits; as Lisa Nakamura elucidated, viewing these women “through the lens of […] docility, manual dexterity and affective investment in native material craft,” company management blithely likened this work to “labor of love” cultural production in their corporate literature. 1 I’ve found myself thinking about these little-known women lately, wondering what stories today’s tech mythologies obscure, and how we might creatively open space for new stories.

Today’s transitions are complex. Communities used to making things grapple with uncertainty in the face of technological developments; meanwhile, digital fabrication tools reshape relationships between hand and machine, while knitting projects, like the pussy hat project, spread on social media, jumping between online networks and the geography of march routes. In the aftermath of an election that played out in newspapers and in news feeds, on red hats and on Reddit, this hybrid space — interweaving physical and digital production, complicating distinctions — is fertile ground. Of course, who gets to control that ground — and whose crafts are coded as culturally valuable within it — remains to be seen. If history is any guide, the results won’t be evenly distributed.

Projects underway here in the Bay Area point to roles for critically engaged craft in mapping this emergent terrain. Some remix technological elements to suggest alternative futures, which seems understandably inviting in a new political reality that many find dystopian. My colleague at Berkeley, artist Stacy Jo Scott, assigned students an “exquisite artifact” project, challenging them to use manual ceramics techniques to combine 3D prints and create an artifact from a fictional civilization. “It was especially poignant to read the histories of their invented civilizations after the election,” Scott wrote in a Facebook post. “Most of their stories were unabashedly utopian, ideas of shared community and right relationship with the earth. I’d like to believe that one of the first steps to right action is imagination,” she noted.

Other actions skillfully employ new modes of production and distribution. I’ve seen laser cutters and 3D printers deployed as tools for guerrilla campaigns — makers create tokens and speculative objects, rapidly turning radical ideas into tangible provocations. Some interventions have shown up in the landscape of my daily life, from installations at the Market Street Prototyping Festival to student projects that distribute laser-cut badges engraved with startling questions or discussion prompts. In the days before the inauguration, organizations including Southern Exposure and feminist hackerspace Double Union hosted events for communal crafting. Along with a workshop, artist Stephanie Syjuco created a Google doc with resources for making fabric protest banners. Sparked by questions from people who had seen images of her banners on social media, Syjuco’s document is itself a hybrid artifact, referencing online clip art alongside sewing and ironing techniques. 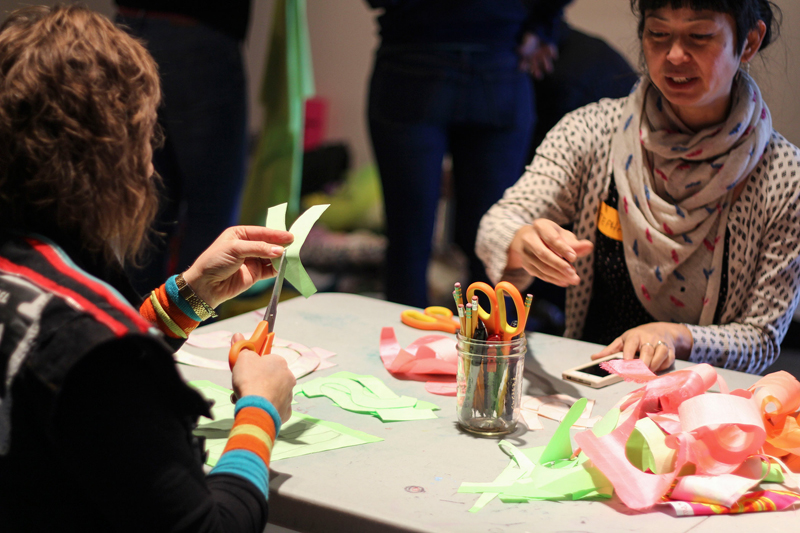 These practices locate approaches rooted in communal craftivist histories, like the organizing done in knitting circles or the narratives woven into quilts and arpilleras, within networked spaces. In a context of shifting supply chains and anxiety over the value of skills (whether one’s raw material is fabric, steel, or code), subversive interplays between craft and technology suggest the possibility of alternative forms of value. Collaging tools and logics — linking digital methods and a DIY ethos, turning tactile objects into tactical media and vice versa — these projects embed challenging ideas into forms that travel simultaneously across urban squares and Facebook feeds, seeking new paths through today’s terrain.