Starting on December 9, for a period of four weeks, the museum will host “Retrospective,” an exhibition within the biennial’s exhibition conceived by Xavier Le Roy as a choreography of actions by fifteen Taiwanese performers in situations that investigate various experiences of the present as a composition of several times coexisting in the same time and space. “Retrospective” engages with excerpts from Le Roy’s solo works and biographical elements from each performer as well as the intersecting apparatuses of the theater and the museum.
Corinne Diserens, Taipei Biennial 2016: Gestures and Archives of the Present, Genealogies of the Future 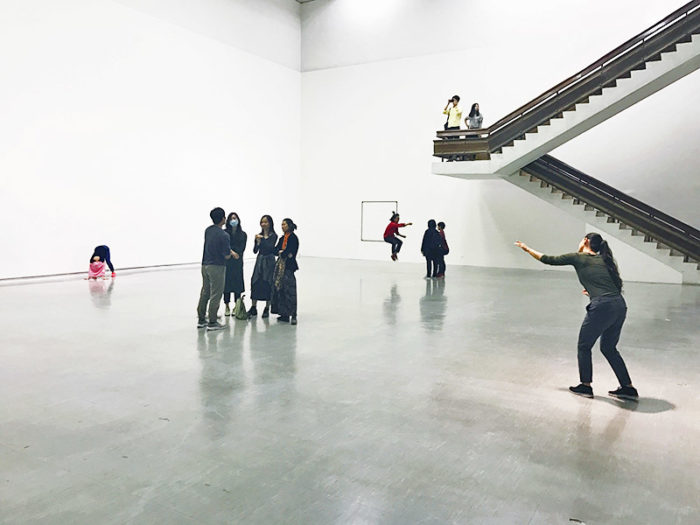 We worked in two daily four-hour shifts (five-and-a-half hour shifts on Saturdays), clocking in and out of work using a timestamp machine, the likes of which Xavier said he hadn’t seen since he’d worked in a print shop in the 1980s. Once we had taken our places in the exhibition galleries, we circulated through a series of positions, movement phrases, truncated and expansive conversations with museum visitors, and periods of rest. We talked about the structure and system of “Retrospective” like a machine or a game which we operated, which in turn operated upon us and the exhibit’s visitors. The work’s rules, and the fact of the month-long exhibit, meant repetition was a basic principle of performance.

So there were other ways to quantify our labor: how many times one of us had repeated a certain loop of material that day, or how many times someone had performed the fullest version of her “individual retrospective” that day. These were hybrid compositions of movement and speech we each developed, interweaving performed citations of Xavier’s solo works with stories and movement-based material produced (invented, extracted) from our own personal lives and banks of knowledge. In many cases, these retrospectives mapped the experiences that formed each of us as performers and individuals, echoing the form Xavier explored in his 1999 work, Product of Circumstances.

Because we were invited to draw from our lives to compose our personal retrospectives, the expanse of material we could use seemed limitless. It’s hard to say when my work on my retrospective began and ended. I first experienced “Retrospective” as a museum visitor when it was at MoMA PS1 in 2014, and I was so moved by the performances that cast shared, that I began imagining my own performance-lecture on how I had become a dancer. Since we began actively preparing this work for the Taipei Biennial this past November, I’ve been recomposing my story for myself, for Xavier and his artistic collaborator Scarlet Yu, and for visitors to the Taipei Fine Arts Museum, where we exhibited the work daily this past month. 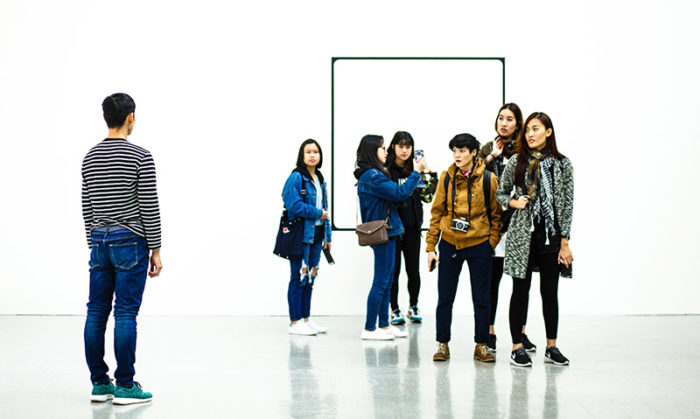 Museum visitors spend an average of fifteen to thirty seconds with each work of art they encounter. “Retrospective” produces a very different experience for the visitor who glances quickly versus the visitor who lingers or who returns on multiple occasions. At intervals, and in certain positions in the system, our task was to directly address the people who had entered the exhibit, to share our retrospectives with them as witnesses and conversation partners. But when your public is free to drift away at any moment — and this is what visitors to a museum do in relation to works they typically find there — how do we activate their choice to stay?

Among the fifteen of us, I saw different tactics of address: intimate, public, theatrical, pedagogical. Performers adopted and tested roles in relation to museum-goers: the entertainer, the teacher, the docent, the host. When we had to travel towards visitors on our hands and knees, the ones among us with the supplest backs approached visitors animal-like with live, swaying spines; others were playful children, or seductive supplicants. For me, each initial encounter with the public was a rich combination of fear, anxiety, excitement: would they bear with my broken Chinese and the lines of Mandarin I’d memorized to get me as far as “Is it ok if I use English?” Would what I was about to share intrigue or bore?

Each address was an exercise in the art of engagement with speech, facial expression, the right amount of personal space, the right level of intimacy, the gamble of a shared language or the willingness to struggle along without one, the arbitrariness of the time we’d been given and the person who had arrived in front of us. This was the ethical crux of the work, for me: beyond its interventions in the way visitors experience art and performance in institutional art spaces, this was an investigation into how social connections are built and reinforced: how we talk to, listen to, share space with, and sense one another. The work created occasions for sustaining and interrupting attention, and asked us to think about the conditions that bind us socially to one another: generosities and judgments, vulnerabilities and aggressions, distractions and habits. 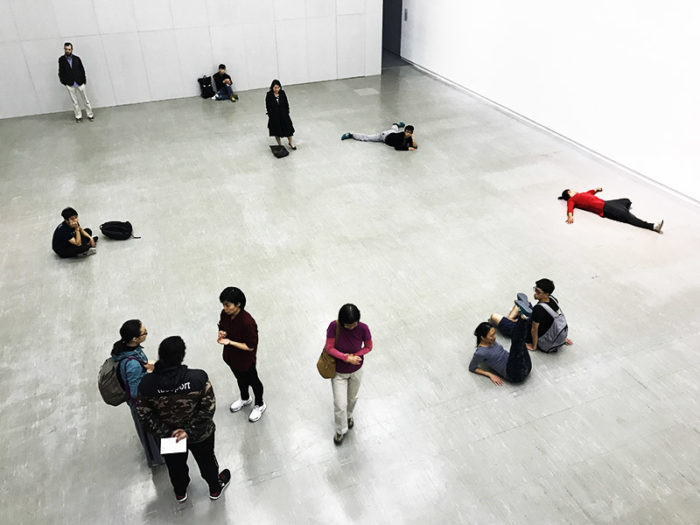 In 2008, two important things happened: the global financial crisis, and I began dancing.

Through reviewing my personal history to find material for my retrospective, I discovered (or created) the chronological coincidence of having joined UC Berkeley’s student movement against privatization and, around the same time, having become a dancer. I had fun turning this into a plot point of my life. Whenever I shared this with a visitor, it became the occasion to sit together on the floor to talk about the first social and economic justice protests I’d ever taken part in, and the practice and politics of bodies in public spaces: the tension between regulation and disruption.

I was reading André Lepecki’s Singularities: Dance in the Age of Performance, and that was my introduction to the Deleuzian theory of singularities: “turning points and points of inflection; bottlenecks, knots, foyers, and centers; points of fusion, condensation, and boiling; points of tears and joy, sickness and health, hope and anxiety, ‘sensitive’ points” (Deleuze, The Logic of Sense). I started seeing conditions of singularity everywhere around me: in the work’s continuously evolving matrix of space, time, and bodies, in the potential of every social configuration to produce intensities, both pleasurable and challenging. The process of creating a story from the events of my life filled nearly everything I experienced with the potential for meaning and a place in the history I was building. It was overwhelming, exciting, torturously unending. 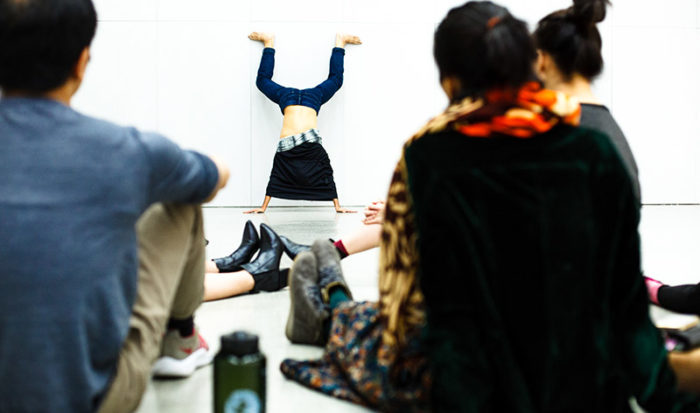 Even until the last days of the exhibit, the process felt unfinished. This was the hardest lesson, and the one I learned last in the project: I’ll carry that sense of dissatisfaction and incompletion until I decide to put it down. The satisfaction had to be found in the daily experiment under daily conditions, not in the perfection of form. When the subject of work is life, or the potential of the social conditions we inhabit, the work is continuous with living. Endless work, until the end.

I dug into the experience of the uncanny, in trying to find meaning and purpose in the repetitions of our movement phrases, in the cycling between known positions and tasks in the exhibit, through encountering boredom, through the execution of over twenty-three work shifts across a month of days. Repetitions produce distortions, degradations, variations, disorder. I had no choice but to change what I was doing all the time, even when the intent was to repeat. The first instance of anything never recurs, and even the idea of it drifts, so that eventually, in the midst of returning to set, repeated phrases and routes, the most productive (and risky) place to be was with the illegible moments (and movements) in between the recognizable ones. That which might momentarily be experienced as “new” but which slides so swiftly between states of knowing. It is the edge of naming the thing you are seeing, the discomfort of knowing where you have been, thinking you know what’s ahead, and not being able to grasp the present in between. 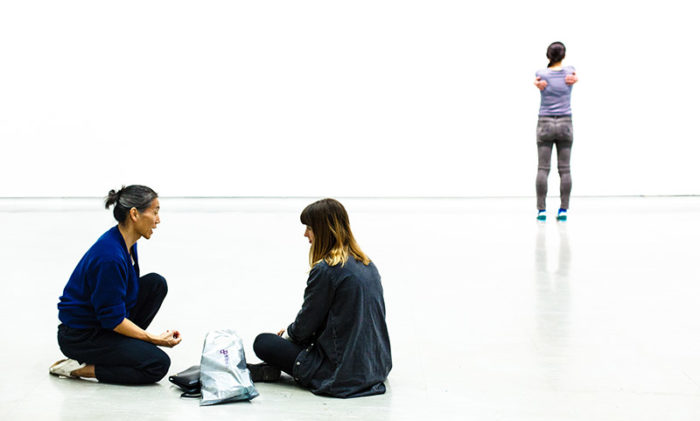 In 1998, my mother died in Taipei after being struck by a motorbike on the day of her own mother’s funeral. I was 21, it was winter break during my last year of college, and the call from my uncle came in the middle of the night. My father, sister, and I flew immediately from the US to Taiwan to say goodbye to her at the hospital. Some things I remember vividly from this time were the masses of motorbikes in the streets and the Buddhist prayers I learned to chant at the temple my sister and I were taken to daily.

I shared this story with museum visitors nearly every day, sometimes multiple times, as part of the material I had developed for my retrospective. Sometimes I described that time as the point in my life after which I began going to Taiwan more regularly: as if this were responsible for my being there for this project. Other times I described that loss as one of the most transformative events of my life: part of the sequence of events that led me to California, and eventually, to dance and performance. Eventually I fought the urge to contextualize and narrativize, to justify why I’d shared this story with strangers. I presented it like a punctuation or a disruption. Instead of making sense of loss, I wanted to manifest the affect of sudden loss: impossible to reconcile with anything in the past or the present, beyond the order that narrative makes.

We were in the second week of rehearsals for “Retrospective” when Oakland’s Ghost Ship fire took the lives of thirty-six people from my personal and extended community back home. I had a disorienting, sleepless series of days. Echoes of coming to Taipei to grieve.

A few dancers from the project took me to a local temple to light incense in honor of the fire’s victims and survivors. The exhibit opened, and I folded this loss into the process of telling and re-telling the story of my mother. Late in the project, in the final week, I started reaching beyond what I’d rehearsed to say to museum visitors about her death. I recalled more about the work of caring for her body, and the failures of my own body during that time. The conversations I was having with visitors about her death expanded, and I let one loss speak on the occasion of the other.

On my last morning in Taipei, I made this recording walking down the small alley where I’d been staying in Taipei’s Datong District. The home at the end of the street was hosting a funeral service, and the chants were the ones I had learned in 1998. I walked by their open door and remembered.