Invaluable and Devoid of Interest

When I invited the French curator Pierre Bal-Blanc to contribute a One Sentence Exhibition, he replied that he’d be coming to San Francisco the following month and would give it to me in person. I had read a few articles by and about Pierre, about his proclivity for paradox, his research for ruptures, so I wasn’t surprised. As promised, when he came to visit SF on September 24th, he handed me an envelope. He had just visited Anna Halprin at her Mountain Home Studio in Kentfield, CA. Halprin is the seed for a performance project he’ll be organizing in Athens and Kassel next year, as part of the documenta 14. I just now remembered he had mentioned Halprin, specifically her unforgettable project Ceremony of Us (1969), in this interview, but when we met in SF, it became clear just how important her work was to his thinking about dance, about movement. And how important she is to the story of postmodern dance. She’s an international treasure. 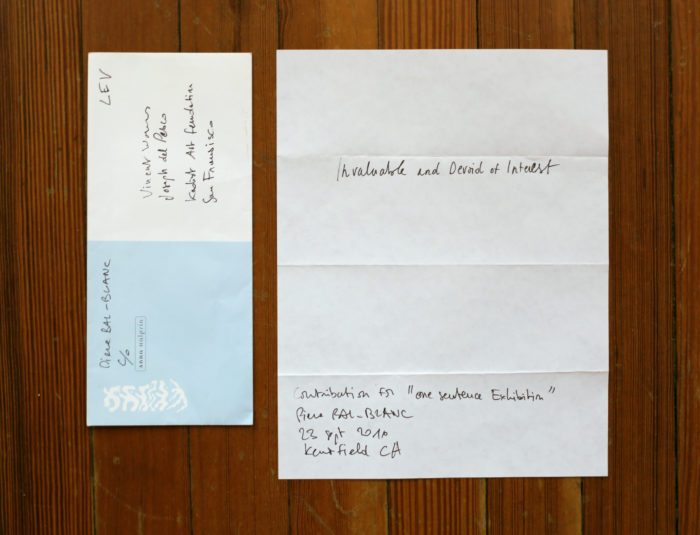 His sentence, as shown in the image above, is “Invaluable and Devoid of Interest.” Normally, each word or phrase in a One Sentence Exhibition is animated by a hyperlink. The sentence is both a narration and a point of departure, an exhibition title and a discursive accompaniment. So lacking links offered by Pierre, I’ll suggest a few (and have already). And maybe I’ll start by asking, just what does it refer to? It’s not a Zen kōan exactly (evoking productive doubt in the mind of a student), but closer to F. Scott Fitzgerald’s general observation in 1936 about holding two opposing ideas in the mind, simultaneously, and still functioning. Perhaps it also speaks to the complexity of critical judgement, of curatorial selection. Might a curator not recognize that an artist’s practice is historically important, but find it either of little interest personally, or to a potential audience? It could also, just as easily speak to the invitation to make a One Sentence Exhibition, a critique of the platform, compounded by a refusal to participate in the online publication as intended: on-line. Or perhaps it speaks to the plain fact of the page itself, including the information on it. A self-aware sentence on an unassuming white sheet of paper, folded three times and inserted into an envelope. Evidence of human-movement. The consequence of touch, of having been touched. Maybe it’s all of these, invaluably.