“I’m Only Now”: The Institute for New Feeling and the Politics of Presence

In the first moments of Institute for New Feeling’s 2015 video “Seek: A Self-fulfilling Prophesy,” we hear a disembodied female voice echo this private anxiety over ambient tones. A jagged, 3D polygon transits aimlessly across digital skins of manufactured urban landscapes, which stretch chaotically across the screen’s frame.

The scene shifts to an austere, mirrored room, wherein our speaker, known as Genevieve (positioned on what appears to be a hybridized, experimental massage chair and virtual reality CAVE) verbalizes personal information (mother’s maiden name, home address, pre-existing conditions, and so forth) to an unseen narrator — the internet, personified. He (it?) guides the aleatoric session through Google’s Translate and Maps applications, as well as frenetic transliterations of found phrases. The “oracle” then pulls selectively from Genevieve’s responses, generating mysterious and incoherent visual artifacts online, which are eventually saved to a desktop folder entitled “future.” 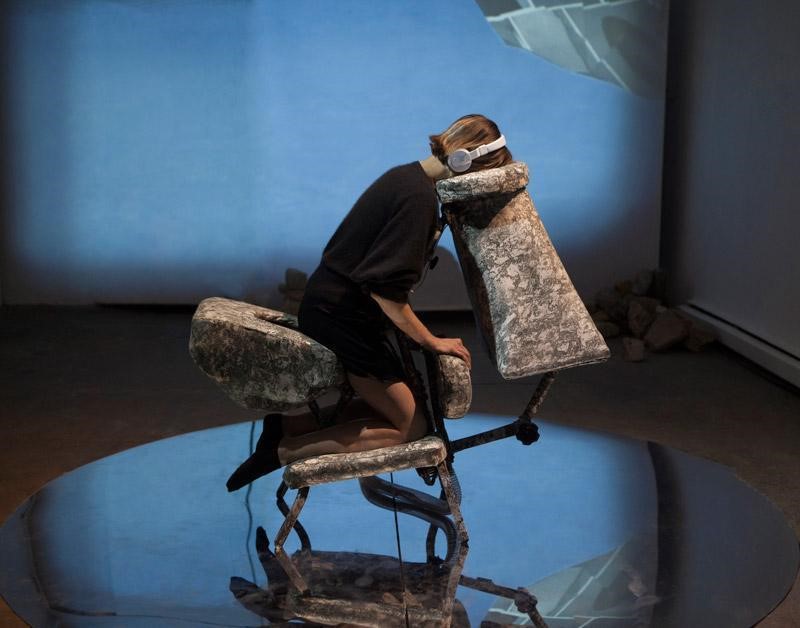 Still from Seek: A Self-fulfilling Prophesy (2015). Many of IfNf’s experiential works conflate senses of criticality, sincerity, and play.

The Institute for New Feeling (an LA-based creative agency founded by Scott Andrew, Agnes Bolt, and Nina Sarnelle) refers to this process as a “clairvoyant reading generated by the misuse of online search engines,” and it is this inversion of normative relationships between users and products which typifies the agency’s body of work. In pursuit of a somewhat enigmatic mission — to develop “new ways of feeling, and ways of feeling new” —  the Institute has produced an expansive oeuvre of speculative wellness products, an SEO (Search Engine Optimization) campaign, and interactive installations, all of which share a distinctly posthumanist approach to the complexities of navigating inter-and-intrapersonal relationships in digital life. While platforms such as DIS also operate at the nexus of consumerism and criticality, IfNf’s savvy, almost corporate appeals to optimism and authenticity deepen its identity as a believable brand, one whose architects are attempting to explore the intersections of art, critical theory, and technosocial marketing.

The IfNf’s agenda is not apolitical; nor does it intend to present itself as a true corporation. The collective draws partial inspiration from Accelerationist thought, and applies this philosophy to the way in which time enacts itself on our physical forms. For example, a demo video for Furthering Cream (“an accelerant for the face and body”) depicts the elixir dripping from wall-mounted containers, landing on prone bodies below. The Furthering Cream adheres, building abstract landscapes as it hardens — referencing both the earth-bound minerals from which so much of our technology is made, and contemporary fetishes around “natural” self-care. IfNf’s speculative treatments often intend to exaggerate the commoditization of self-betterment while demonstrating how this phenomenon intersects with the labor of maintaining oneself. 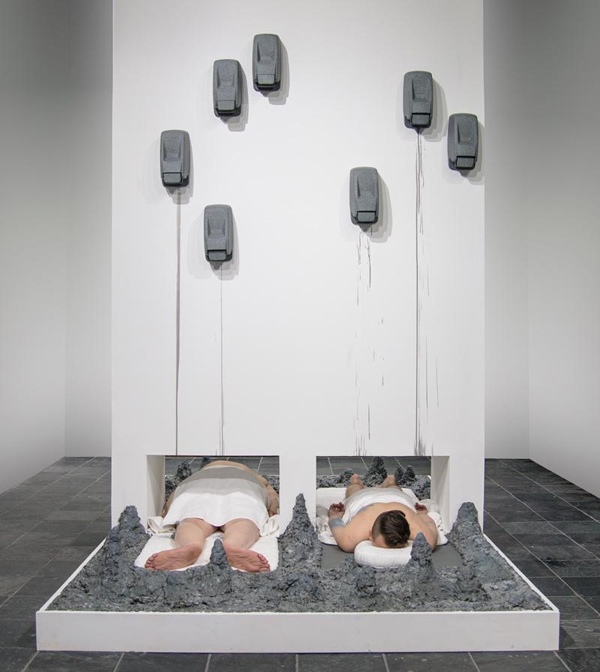 The IfNf applies Accelerationist thought to their Furthering Cream, an experiment in self-care that questions the fetishization of the “source.”

As autonomy becomes increasingly vulnerable to managerial and technocratic demands on individuals’ time and resources, we take on more and more of the costs of that very self-production. Were we able to overproduce our bodily forms, we might transcend the metrics currently employed to diagnose and manage them.

The Quantified Self Movement, a facet of the wellness industry known for its aspirational “Self knowledge through numbers” maxim, is a direct cultural antecedent to IfNf’s critical investigations of technology and the body. But while IfNf understands data as multiplicities which are only temporarily reflective of a multidimensional “you,” the QSM relies on a cohesive image of the self; it totalizes the subject and seeks to eliminate the subjective, the material substrates, and the entangled and complex geopolitical realities which enable the movement itself. In a life of perpetual, networked presence, the individual is prime; depictions of this subject-position “by the numbers” frequently elide the congealed labor and extraction necessary to create the platforms the user plays upon (and which also prey upon the user). As the present flattens our space of thought, we trade against our own biology (inherited) and lifestyles (adopted) in the hopes of evolving, becoming metric-aligned. A hope of feeling new is really just an upgrading of our already-pathologized skins. 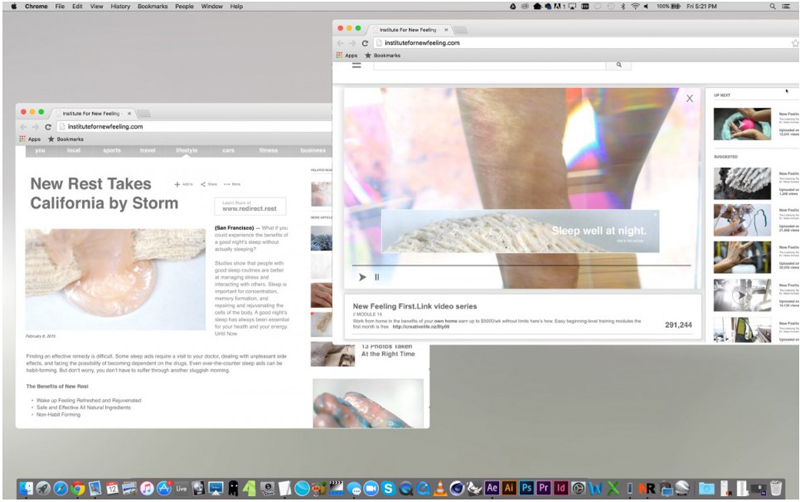 Still from This is Presence (2016), commissioned by the Ballroom Marfa for the Artist Film International program.

Across IfNf’s many dimensions, a critique coheres around ideas related to an abjectly human body: through the processual cyborgification of humans-as-users, new affective relations may be forged. In line with this transhumanist ideology, the agency has recently undertaken a project inspired by SEO. Described as “a kind of performative intervention in the backend of the web,” it scrutinizes acts of identity creation and maintenance online, and addresses how much of this activity (often unbeknownst to the user) is consigned to nonhuman entities. (For example, half of the internet’s traffic is composed of bots — many of which have been designated, fittingly, as “impersonator” bots). SEO, a tactic meant to heighten a website’s visibility online, inspired the Institute to oversee the creation of 1,000 sites related to their projects by a content mill workforce.

A dialogue between human visibility and absence persists in IfNf’s writing and visual work: the deployment of “paracapitalist” technique shifts the focus from a user’s legible presence within digital culture. “IfNf’s fabricated corporate structure is a way of collectivizing art activity under an elusive we. In a country where corporations are granted personhood, this we is both protected and powerful.” 1 One may also view the cloak of collectivity as a refutation of a heavily financialized arts and culture industry, wherein the labor of myriad individuals may be absorbed under a single, celebrated name. It is indeed relevant to hypothesize new ways of allocating and experiencing power (even via a withdrawal of one’s individual identity), but it is easy to become mired in “reticular fallacy” (a claim asserting that, were hierarchies of power to dissolve, then so too would sovereignty). If distributed networks and horizontal communications platforms assume their own unique shapes of sovereignty, is IfNf’s experiment testable within such various and specialized systems? Can “new” feelings emerge within fields that have already been so thoroughly saturated and mediated by capital?

In a supplemental essay written for The Redirectory, IfNf cites the advent of a “digital mirror” built by MemoMi Labs in 2015: “The Mirror that remembers you.” In MemoMi’s demo, the model’s to-scale likeness and attire are fully scanned, saved, and sent to a selection of friends, so that they may collectively offer real-time feedback. The internet once again serves as oracle, factory, and mirror. Contrary to a “by the numbers” model, this outsources the cultivation of oneself — a crowdsourced mirror stage. How many eyes are required for the person in the mirror to become cognizant of their Thingness? Erasure is a form of violence, but so might be the opening up of one’s image up to hypervisibility. 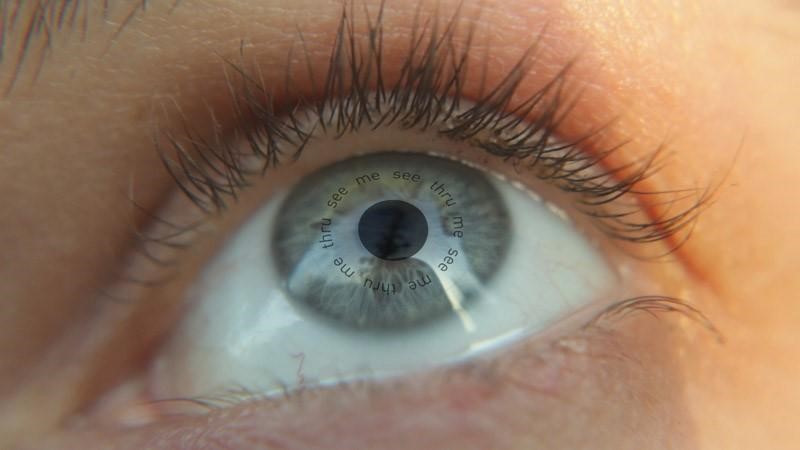 The eye too is a factory (the lens system, the cytoarchitecture of the retina), and so a “custom blinding” contact lens that’s part body-hack and part blackout subverts the role of the “camera eye” as a preexisting bio-industrial technology. The deletion of the visual field frustrates the wearer’s ability to assume the position of a post-Fordist laborer who works for free, ceaselessly framing and filtering their world into semblances of cultural product. Austerity, intensified precarity, and the encroaching threat of automation act as reflective panes which allow modern subjects to memorize images of their objecthood, and internalize their imperiled status as monetized, accelerated, flexibly specialized individuals.

IfNf attempts to forge a new value system alongside the current one (which measures personhood against one’s economic viability, whether in the guise of formal or social capital) through an exploration of the invisible, backend processes which constrain, propagate, and metabolize any outright critique against it. To transcend the power asymmetries of this dynamic and actually advance the ontology of Self-as-corporation is to lay claim to benefits which are denied subjects, but awarded to objects and entities. New ways of feeling, or new ways of being? When externalization appears mandated, how are we to register the difference?