Drawing the Curtain: New and old violence in three acts

It was my first week in Mexico City and someone was screaming outside my window. At first I thought it was a drunk headed home from a nearby bar; as it grated on, I realized this was no drunk.

I went to my window and saw a woman in jeans and a sweatshirt and a man next to her slumped over against the wall of the middle school across the street. A third man walked away from the couple, passing in front of an idling truck. As he moved through the truck’s headlights I saw he was holding a machete. Without reason or warning he stopped and looked up at my window. I still do not know if he saw me, but I was so terrified by the possibility that I lay awake all night afraid to move, convinced I could hear the truck circling the block until sunrise. The lesson I learned is that sometimes things happen, and when they do, you cannot go to the window.

As I write this, a group of men are in the front garden of a semi-abandoned house next door we call “la ruina.” These men, who a few months ago hand-built a watchtower to surveil the street with rifles, are welding something inside a makeshift tent in the yard. Nightly, seemingly oblivious to the hour, they drag heavy metal objects through the crumbling house; their witches’ cauldron of midnight cackles, rattles, and banging enters my dreams. One of the men looks up at me through the window. He sees me see him. I am violating the window rule. I take a breath and draw the curtain. It’s not uncommon for houses “to be taken” here. The nebulousness of the phrase reflects the vagaries of the situation. Taken? How? By whom? Why? How can “they” just do that?  The answer is that “they,” whoever “they” is, can — and “they” do.

To make a complaint with the police requires faith in the police, but also means having to confront the perpetrator face to face. While this may have made sense in a more innocent time, it’s easy to imagine the retributive cracks in the logic of this system today. Given the lack of rights or protection afforded to victims of crime, a metaphorical and a literal veiling is how most people handle violent intimidation.

Talking about violence, especially when one is resigned to inaction, helps alleviate the stress of the unknown while building a sense of community. But writing about violence leads one to walk a strange line always wondering: am I sensationalizing or glorifying — or worse — profiting from this situation? In trying to confront a culture of fear am I inadvertently affirming it?

How can the written word best be deployed as resistance?

In “Writing the Void” (ARTFORUM, summer 2016), Homi Bhabha states: “The void that emerges from the act of writing is not an evocative abstraction lost in the mists of metaphor. The void is, quite literally, the empty space of erasure and extermination: of missing persons, destroyed things, hidden stories, lost records, expropriated lands, murdered minorities.”

What is the void in Mexico? Is it the 27,600 missing since 2006? Is it a lack of functioning justice system? The lack of incentive for leadership to change?

Despite an estimated 89.3% of crimes going unreported, the Secretariat of Public Security’s violent crime statistics for the first half of 2016 place violent crime on track to reach or eclipse levels not seen since 2011. These numbers confirm what most people know anecdotally. The only thing to do is pull the curtain and go about our business. 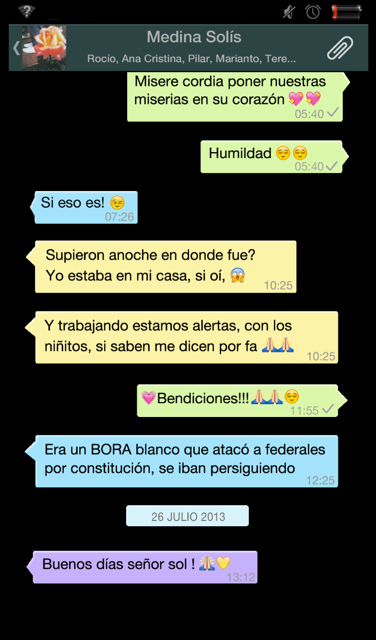 From Maria Jose Sesma’s Mea Culpa. Courtesy of the artist.

“That’s how it started, with four heads in a truck in the parking lot of the Sam’s [Club] in 2007. There was a note that said ‘this is because you killed blah blah’ and then it went from there.” I’m siting in a café in Mexico City with artist Maria Jose Sesma and she is telling me stories from her hometown, Torreón. We are talking about the violence in the north of Mexico versus the south.

Sesma is a photographer whose work revolves around the subtleties of violence, specifically within her upper-middle class family in the state of Coahuila. According to Sesma, the violence in Mexico is at least partially attributable to the violence of Catholicism. “It makes us used to the blood. Catholicism is so violent, you do something wrong you are damned, so people start to think, ‘I’m already damned, what does it matter?’”

Sesma’s work traces her family’s quotidian relationship with external violence and the ways in which it is internalized individually and then within the group dynamic. In Mea Culpa, a video of her family’s WhatsApp chat history, her relatives move seamlessly between discussing the miracle of a bleeding Eucharist in the tabernacle in the local church, warning each other about gunshots, and posting photos of a truck with tinted windows and no plates driving around town kidnapping people. When one cousin announces that she prayed so hard glitter appeared in her hands, the family congratulates her on receiving a miracle and insists she save it in vials for them. The chat has a desperate urgency in its logic of magical thinking.

The statistical volume of violence in Mexico is so extreme it’s practically impossible to absorb the level of human tragedy. On one hand the news’s daily pornographic serving of bodies and blood starts to read like a pathetic cliché in which wild rationalizations become normal; “must’ve been asking for it,” one finds oneself thinking. But is it any less a cliché to think that gore-soaked media could make all this violence seem banal? No amount of sensationalized media would be desensitizing enough to make a felled body such a non-event that a passer by would simply sniff and step over the corpse. Yet the idea that violence in Mexico is banal or that it only touches those who “are asking for it” persists — a collective magical thinking to make peace with the instability.

The thing is, instability isn’t just about modifying dress or behavior to avoid petty theft or express kidnappings. Instability is the city shutting off water to twenty million people for three to six days with one day’s notice. It’s the knowledge that if a building can be “taken,” then private property is little more than a theoretical notion, and the police who sit by as it happens are as dangerous as the people being paid to “take” the building. Instability is a generation scarred by memories of an earthquake that made it seem as if the land itself had grown teeth, and an inept government’s failure to provide basic rescue services. It’s the knowledge that heredity and favors are more valuable than labor. It’s the understanding that the sadism of so-called narco-violence is a metalanguage of fear meant to control the elite, the marginalized, and everyone in between. 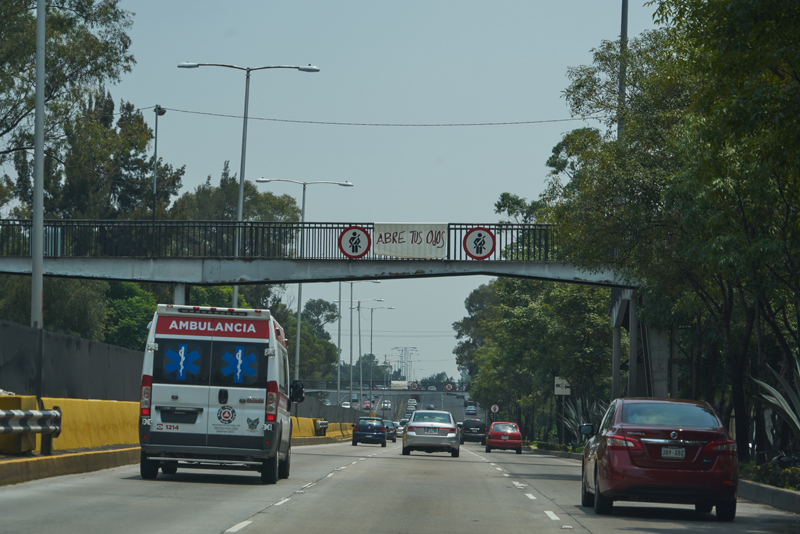 Recently Sam Durant visited Mexico City to present a new project commissioned by arts foundation Alumnos 47. The piece, Dream Mantas, is a riff on narco mantas, banners emblazoned with warnings or messages from narco groups hung in public spaces, often from bridges and frequently accompanied by a body or body parts for grisly good measure.

Durant’s Dream Mantas, like his Electric Signs series, appropriates protest slogans from various liberation movements and displays them out of context, on canvas banners hung from bridges over freeways in Mexico City. “We hung the immigration themed ones on the way to the airport,” he explained, referring to photos of mantas that said “dejamos entrar” and “abre las puertas,” immigration-related slogans from various international movements (translated into Spanish for the project). Never did he mention La Bestia or that Mexican migration to the United States is at the lowest since the 1990’s.

Durant is a smart artist. So I was astounded to see work that so casually appropriated a medium of terror messaging, emblazoning it instead with phrases like “Dile como es”—“Say it like it is” — which when translated into Spanish and recontextualized in Mexico resonate with an empty cynicism that proclaims not so much ignorance as an indifference to the present local realities of migration and workers’ issues. The most frustrating part about Dream Mantas was the impression that Durant couldn’t be bothered to do so much as a cursory investigation into the issues his own work alluded to. My lasting impression of the project is one of insensitivity, exploitation, and laziness.

The destructiveness of such laziness applies to positive impressions as well. A recent conversation with a gallerist in San Francisco reminded me that the notion that “Mexico is the new Berlin” remains alive and well abroad, even among the educated and well-intentioned. Given the sociopolitical context, phrases like this and articles with headlines like “Mexico City could be the next Paris” ring inane to the point of obscene. They operate with a reductive and homogenizing consumerist rationale, suggesting that countries and cultures are only worthy of attention if they have a European counterpart. It’s creative-carpet-bagger-bargain-hunting that smacks of colonial speculation.

It’s true that Mexico’s extreme income inequality, lack of social mobility, and monopolistic economy may well be a vision of the future for other parts of the world. Caught between the violence of the sharing economy and the violence of a corrupt state, the Mexican system has for so long been based on exploitation that the arrival of technologies contentious enough to catalyze labor lawsuits elsewhere actually flourish here; people have been conditioned to accept that the notion of ‘precarity’ is useless. These “innovations therefore represent what Emily Roysdon calls, “a transition that is not a solution.”

There’s a popular notion (recently articulated by Mexican club musicians N.A.A.F.I. in response to the latest wave of creative-class immigrants in Mexico City) that the immensity, violence, and general weediness of bureaucratic curlicues for every imaginable transaction has historically given Mexico City a reputation for difficulty that, in turn, has made it resistant to contemporary colonial pressures. Unfortunately, from ’90s-era NAFTA to more recent pro-investment reforms to companies like Airbnb and Uber opening offices here, this sounds more like civic nostalgia than a measured assessment of the present situation. So-called disruptive technologies have already made the city irreversibly easier to navigate than it was as little as four years ago. To argue otherwise is to draw another sort of curtain.