I kept saying time was a bowl. Marred against any will to lavenders I no longer needed to salute September to June as I was constantly counting on my fingers and home-drawn index cards the two-sided months, the microscopic prayers contained in measurable units of life, the muscles memorizing the sound of a Volvo engaging, an anemic ice cream truck trying the children’s block at dinner’s hour, the bottoms of my neighbor’s feet, my sister’s son’s eighth birthday at one count sixty-three days away: a bowl. And it was louder in California for the mystic and also temperate light, for the lack of significant changes in season and then, practically and/or consequently, for the articles we would take in and out of drawers to consider the weather. It was then that I got into cotton and watched movies for what they did to minutes.

When I was a child my mother used to — phone in the cradle of her neck and beyond that attached by a corkscrew cord to the wall — say “Five minutes” in a hushed and loving but fed up way. The plaid walls were green, yellow, and blue, and above the table hung stretched over a round frame — she says there was a store at the mall on Route 9, before the mall became chichi, where my brother and sister who were alive before I was would play in a tent the staff made out of Marimekko fabrics for children accompanying their mothers — clouds: an impermanent machine casting song over the dinner table. It was cheap art, she said, our friends weren’t painters. I am not a painter. I cannot draw unless it’s to make someone laugh. I fright when taking pictures; it seems an unnatural way to stop time so that it might count later, but when will I, or will I not, remember what ever happened.

Walking around the city you might see how hair has become proof of time. Mine, cut now twice a year, or when I lived in the middle country and cut it myself, blunt bobs with the assistance of my mother when I’d see her, I needed help with the back. That’s not time, it’s avoidance, but ombre demonstrates an era even when it’s artificial counting, a measure against the body, time as earned income. The light at the ends of a person’s hair as a way to make you wonder what they have done with their time since it grew. Sometimes when no one’s looking I put hair in the recycling.

There was the time I ate dinosaur eggs for breakfast, they had been on sale, hard boiled, at the market, not prohibitively expensive for an extravagance, small enough to slip into my coat pocket and peel on my walk to the station. I hold dear the five minutes that I allow for, unnecessary but then becoming some eventual and abstract need, an expected bouquet of waiting with strangers for a computer-operated device to take people underwater and into the city; the twenty-minute trip adequate for reading two Walsers or an article and the five minutes just before the train arrives from over the hill a chance to do nothing and mean it.

Something happened with time and I wasn’t in it. It had been two pairs of seasons by the time the essay was appearing again and I’d already seen the next installment of films. As a child I thought the map at the mall that showed you where you are (You Are Here) was called a “dictory,” which amused my family who could read better. 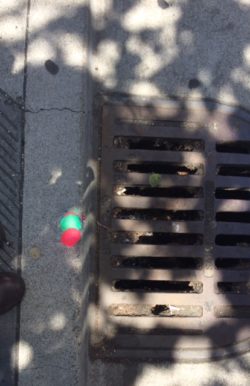 One way to see time in the city.

To pull away from where you might as well be to a boxed-in idea of social order I quit thinking in July. In ten years when we’ll remember what we decided to do instead of following a train into the blue light of industry, will we remember what else we’d done with our days? I wanted to be of use and to be able to see what the world demonstrated without having to compromise, which is a word I came to understand when I lived twelve years ago in the middle country with a person I loved then and when the relationship ended on a staircase.

My mother says choosing an apartment begins outside the building, at the door, on the street and the streets beyond yours. The trees have been useful canopies for four years. I’d never lived anywhere so long that was mine. I tell Jessica who considers everything.

It took a kind of lax I wasn’t practiced in to remember that meeting a stranger would be easier than meeting the person as I knew him then. Time was several bowls I bought from the small store on Clay, made by the shop owner herself, gifts I distributed to friends. Put something small or the thing that was nothing in. I had difficulty imagining people using exclamations for anything but irony — I was an asshole disguised as a nice person with friends. I brushed my hair twice a week. I picked up pennies when I saw them, counted my favorite shipping containers and marked them as indicators of potential. My friends supported these habits. I’ve been tallying showers for fifteen years. These are ways to see time.

For nine months I’d been saying “I didn’t know” but each day it came out of my mouth as a new thought again, a constant reminder of the state of the state of things. I was one of those people who fought with herself, made up, and changed her mind, which I performed like an aquatic machine. It was normal to understand varying degrees of success. I listed myself as receptionist and wondered where he was on the continent.

What changed was a series of fixed translatable points not unlike a game you might have seen on a device in someone’s lap. Reverse these objects to make a pair. It had been years and the signs were beginning to appear frequently. Jasmine, a celebration of the end’s arrival, early. Pennies: a conversation with all aspects of the world. To step away and into something other was a method for counting days without giving yourself over to the windswept companion. It was too easy to look up and stop thinking. To pursue money on the beach. The idea as hollow as any cavity transporting patience to its gloom. I delighted in remembering the fact of an imagination after forgetting its steps and also that I didn’t know everything. Time is a bowl, I told him. I told him again when he took the object and packed it into the trunk of a car. I am not limited in my days. I had begun the rituals to show I had responsibilities. A mark for cleanliness, a mark of time, to show I was alive. I didn’t wave.

Tags: bowls, habits, my mother, ombre, Time, you are here