Notes on the Garage Residency

I grew up in the Bronx, undocumented. Now I make ephemeral work in Portland using what is at hand, which mostly goes undocumented.

To clean up its image as a druggy egghead haven in the wake of two fatal student overdoses, Reed College arrested me and my roommate on campus the day before Valentine’s Day, 2012. It was touted as a successful drug dealer bust. We were both evicted from campus housing. He was expelled; I was suspended for a year. I experienced a period of housing instability, eventually moving into a detached garage in back of a punk house called “The Blue Velvet,” where Reed students formerly lived. After about a year and a half of living there, I decided to call my inhabitation an artist residency. I still live and work here today. 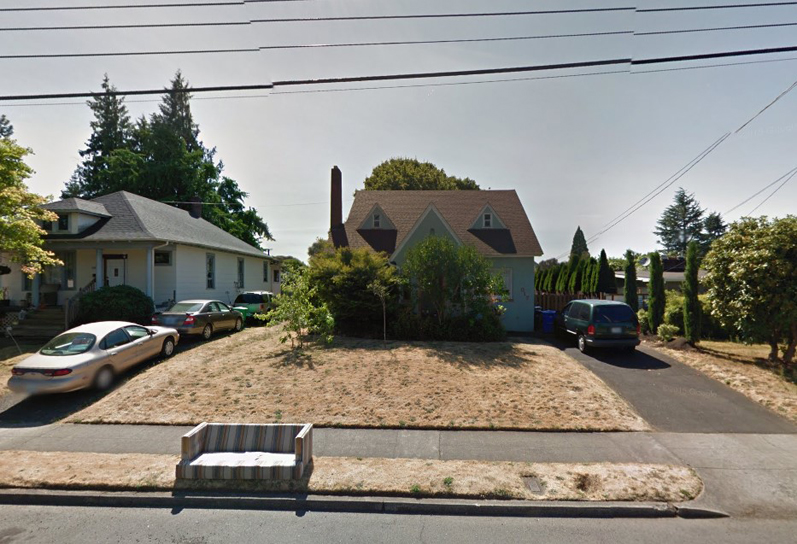 While my parents primarily just type URLs into their Google search bar, I knew that at any moment their digital literacy could increase and lead them to search for me. I didn’t want them seeing results pointing to my arrest and subsequent court-ordered outpatient rehabilitation, so I decided to brand myself as a poet and artist in order to manipulate the search results for my name. I started a new Facebook account, began submitting work to wherever, and put in my year of sobriety in order for my felony charges to be dismissed (I got lucky). My output had slowed dramatically since high school, but I felt I could still identify and live as a poet-artist despite barely making work. 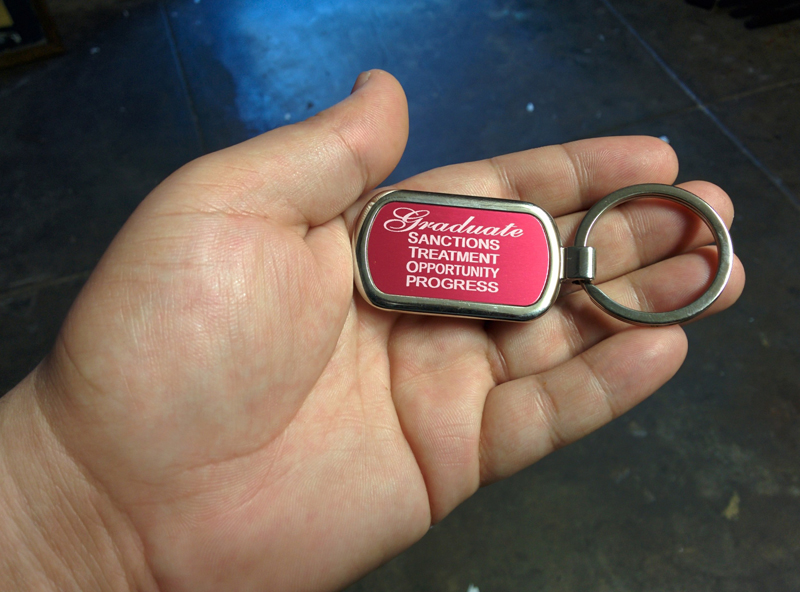 What began as concealment of crime via SEO became a sincere fascination with ephemera, disappearance, and what it means to be “performative.” I can tell it is sincere because when aesthetic work amounts to nothing is when I feel the most grateful: daily jogs with my mom for a month last time I was home in the Bronx, an abandoned flurry of emails, a one-day installation of found objects and detritus in a recently-vacated room, a failed attempt to change this house’s name from “The Blue Velvet” to “The Rossellini.” Documentation can always be manufactured, but for me, nothing beats the specific joy of a work disappearing forever, sweetly, remaining only when invoked in language.

This fascination developed in tandem with the precarity of my income and housing, to the extent that I sometimes saw the odd jobs and freelance gigs I cobbled together for survival as a facet of my practice, since they also sometimes altered the search engine results for my name. I finished rehab and returned to Reed to graduate in 2014 in linguistics, but couldn’t find work until January 2016. My income oscillated between $4,000-$8,000 a year, and I worked variously as a janitor, social media marketer, SEO copywriter, small press managing editor, data entry drone, research assistant, and transcriptionist. Scarcity seemed to engender a slippage between inhabiting a space and making a work in a way that was easier for me to embody than to explain. Treating wage work as aesthetic practice was a lazy way of answering the question: if “there is no art without laziness” (Stilinović), how could I be an artist when poverty is so expensive and labor-intensive? 1 I couldn’t afford to be lazy, to sit around and think and write and walk without worry. I needed to eat. 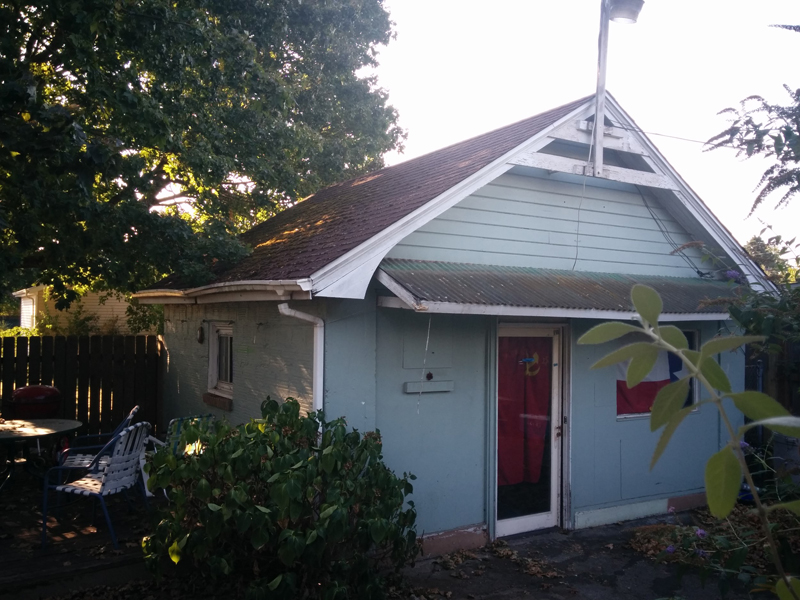 The garage behind the Blue Velvet.

It’s worth pushing back against the idealization of laziness. From Aristotle to Paul Lafargue, many praises of idleness situate work as a demeaning activity reserved for the unfree. Lafargue says “the Greeks in their era of greatness had only contempt for work: their slaves alone were permitted to labor: the free man knew only exercises for the body and mind.” 2 As a person who comes from slaves, I can’t abide this kind of framework, not least because it erases the reality of slaves across history using slow labor, bad labor, refusal of labor, and other similar tactics of laziness as resistance to their masters, but also because it flattens slavery and its afterlife simply to “forced work,” when this is only one aspect of its infinite violence. This formulation of laziness doesn’t offer any useful critique against the idea of work, it just condemns slaves and workers. 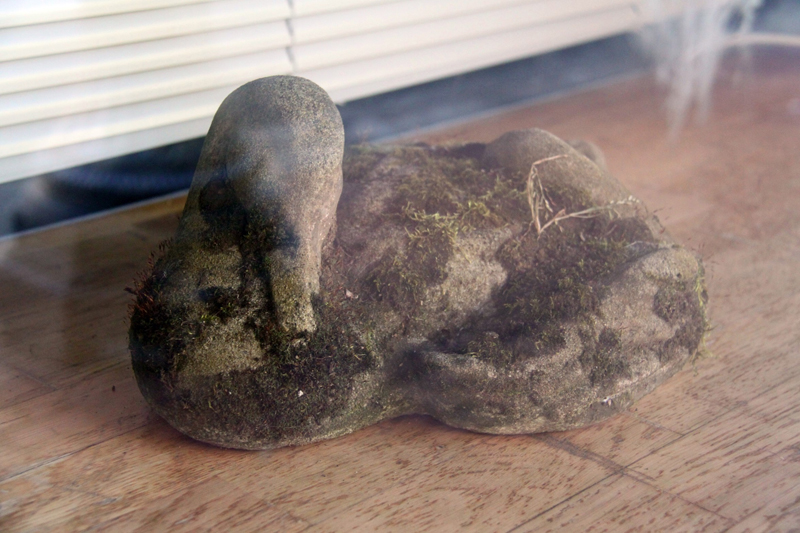 This is simply a transposition of the worship of work made possible by secularization. As a de-Christianized colonial institution, Western art, like capitalism and socialism, treats work as salvation, whereas it was formerly a curse: “For even when we were with you, we gave you this rule: ‘The one who is unwilling to work shall not eat’” (2 Thessalonians 3:10, NIV). Secularization released work from its association as punishment for “original sin,” allowing capitalists and communists alike to reconfigure it as a blessing, a right, a path for redemption from starvation and squalor, a way to become human. Treating laziness as salvation, as “the mother of perfection” (Stilinovic) is only an inversion of this framework (whoever is not lazy is not an artist). 3 Analogously: when a person becomes legible as an artist, and when an object, process, or idea becomes legible as art, from what are they being saved?

Discourses of work and laziness both often rely on the same underlying concept: dehumanization. Whether one takes the capitalist/socialist position where work is humanizing, or the anti-work position where laziness is humanizing, the contrast is clear — one wants to be human, not inhuman. Since settler colonialism positions Black people outside the human category, the discourse of labor “does not explain Black presence, Black labor or Black use in white settler nation-states” (Tiffany Lethabo King). King opts instead for a framework of fungibility to analyze the ways the settler state uses Blackness to meet “desires beyond those of labor and profit.” 4

Also, some things people in Britain gave as their “rank, profession, or occupation” on the 1881 census. pic.twitter.com/n4NaP9RIQZ

Just as the labor analytic is inadequate for explaining the role the Middle Passage and its afterlife play in capitalism’s development, so too is a laziness or non-work analytic. And the deficiencies of such humanizing discourses carry over to the aesthetic realm, not only falling short in the context of explaining Black art, but also manifesting as tokenized inclusion which reifies white settler institutions. Humanist assimilation plays a concealing role, the same way the concept of the wage conceals the violent, fundamental devaluation of the unwaged activity on which it relies. Brooklyn artist Winslow Laroche has a great term for the position of rejecting such frameworks: the “postartist.”

At least since Hegel, the idea of the “end of art” has served to critique the development of aesthetics, as well as the relation between making and thinking. For Hegel, the West is “beyond the stage at which art is the supreme mode of our knowledge of the Absolute,” because art’s dependence on the sensuous caused it to fall behind thought. 5 In a similar vein, Allan Kaprow deployed the term “postart” to describe conceptual and post-conceptual work which, in ostensible contrast to modernist aesthetics of high art as “ritual escape from culture,” blurred the line between banal life and high art. 6 For Kaprow, “nonart is more art than Art art.” 7 This seems true, given the far higher aesthetic potential of that which is not art in comparison to that which has been “trapped” in/as art, unable to return to the mundane or the theoretical, frozen and hoarded like a bauble in a mausoleum. But this blurred boundary easily accommodates market logic, and is itself dependent on a labor/laziness analytic. 8

As opposed to Hegel and Kaprow, a Larochean postart concept is inflected by the Middle Passage and its afterlife, allowing it to question the valorization of objects that exist in a purgatory between commoditized art and nugatory nonart — precisely the fungible position the slave occupies under white supremacy when passing through the longue durée and violent value circulation toward false citizenship. Instead, by dismantling the typical work and anti-work discourses on which analyses, tokenizing inclusions, and dismissals of Black aesthetics often rely, Laroche’s postart allows us to argue that far from living in a time “after art,” the West has not yet actually reached the conditions for art: all the West knows as “art” since the Enlightenment is an ecology of criteria for inclusion which relies on the colonial subsumption of Black and brown aesthetics. The conditions for art as a fundamentally non-functional or non-utilitarian endeavor will never emerge as long as art’s erasure of its own debt to Black and brown practice continues. The descendants of the Middle Passage have long known that all sociality and aesthetic practice is always-already subsumed into the commodity form under capitalism, since this is precisely what was done to our ancestors, and continues today in the prison industrial complex, where slavery is legal as punishment for crime. 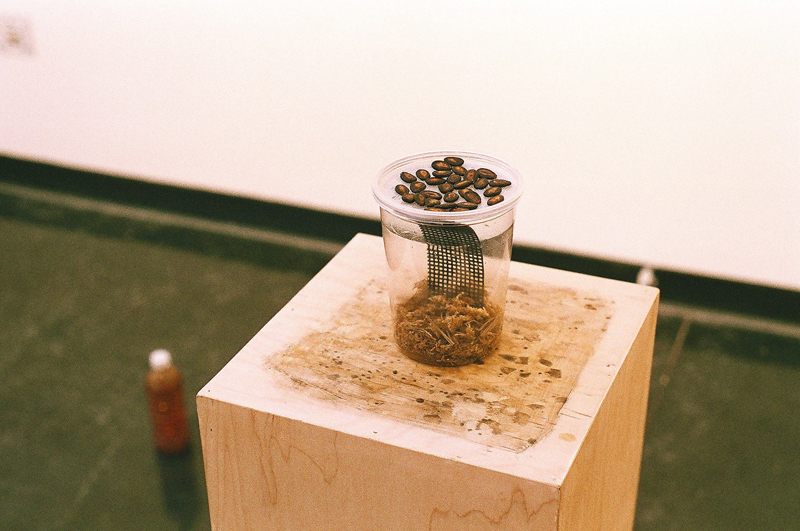 These days, weed is legal in Oregon, and as of June 2016 I work full time as an IT Compliance Analyst/Office Assistant. I recently contributed work to a group show at Reed College for their annual Arts Week  — like nothing happened. As I acclimate to my first real moment of financial stability, I can’t help but bemusedly wonder: if my life is, for now, no longer precarious, what does that mean for my art? From a postartistic perspective, all it does is allow me to buy materials for once, and more fully understand that I may just not have “a practice” the way people usually mean. Stability doesn’t necessarily require a shift away from ephemeral gestures, but few will deny that ephemerality gains artistic cachet primarily in relation to two crutches: true/imagined marginality, and overexplanation. Both sidestep the fundamentally middle-class anxiety that the image of the waged artist evokes, in a marketized landscape where it is both necessary and anathema. Let’s end on a third sidestep: frankly, I’m happy just sharing my money with family and friends. 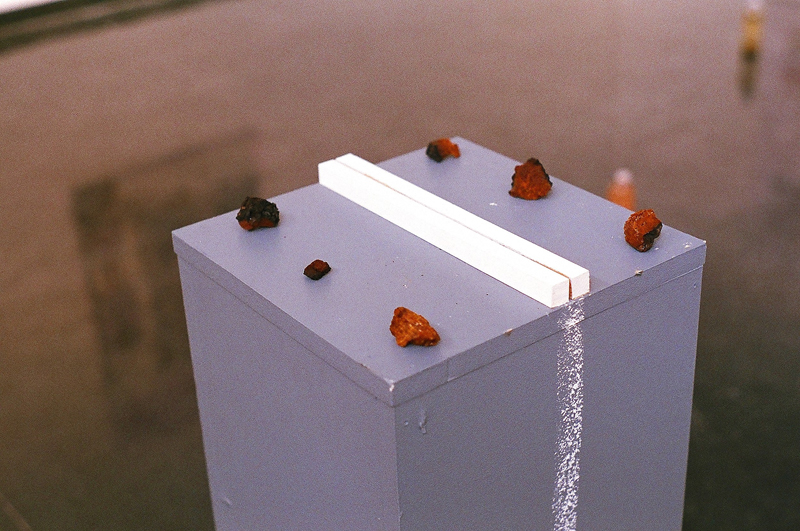