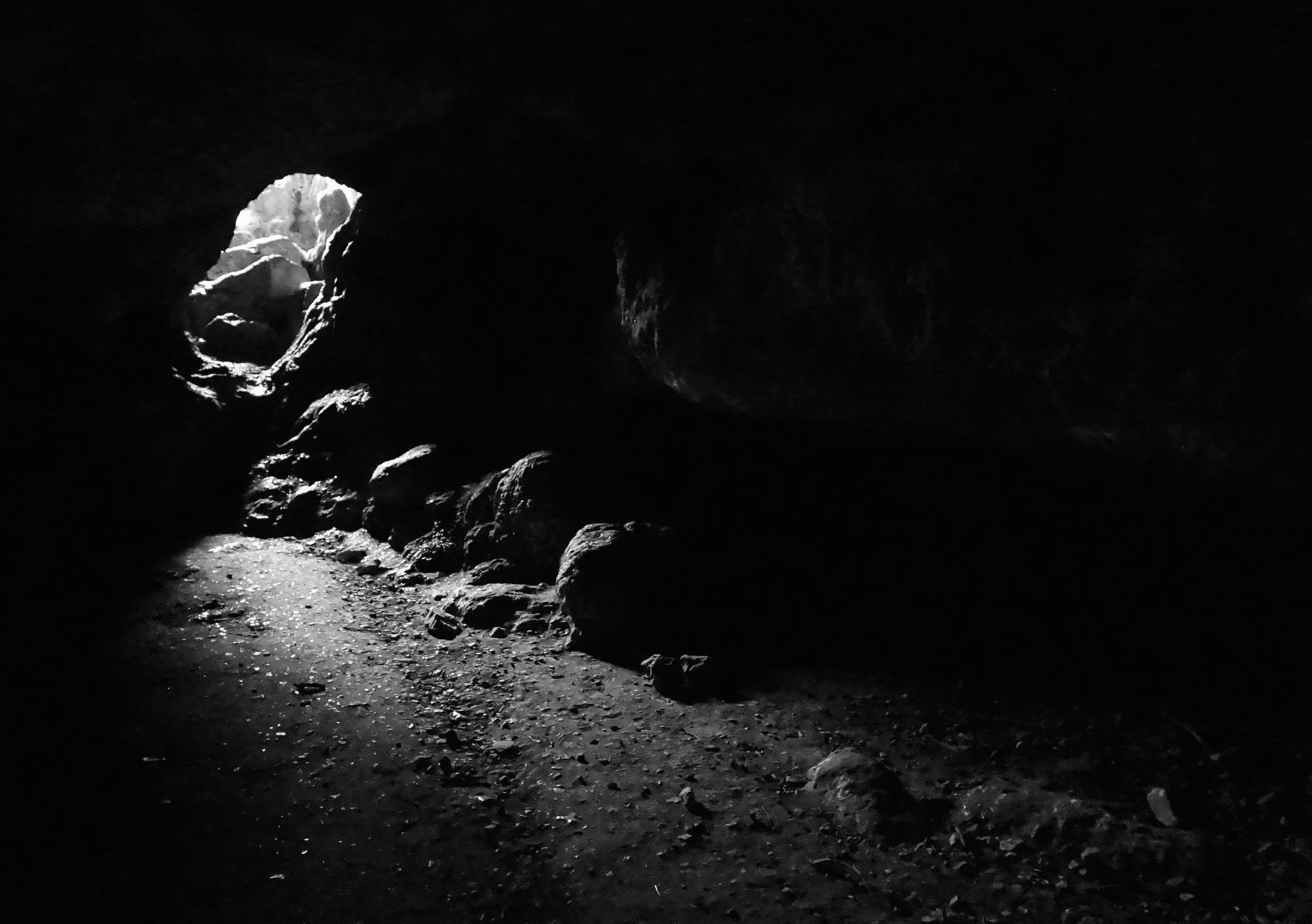 Photo taken by Flickr user Victoria Estrada and changed to black & white by the author. Some use restrictions apply.

Lilith And now, let us experience how far our nature is enlightened or unenlightened. Behold! Human beings gathering in an underground cave, which has a mouth open towards the light; here we have not been since our childhood (or, for some, maybe never at all), and here, our legs and necks can move freely without being prevented by the chains turning our heads toward the screens, which we have constantly in front of us, over which we are ever looking.

Lilith And do you see men and women passing through the cave carrying all sorts of things made of wood and stone and various materials, which they look at exclusively, without looking at one another or at the place in which they are gathering? Some of them are talking. Others are silent.

Eve You have shown me a strange image, and they are strange prisoners.

Lilith Like us, I admit, and they see, but do not know, their own shadows or the shadows of one another, which they encounter only in abstractions and representations.

Eve True. How could they understand anything but the form of these shadows if they were never allowed to intimately examine their own fears and desires, or to truly look at one another in the darkness?

Lilith And, of the objects that they carry, would they see these forms only as image-shadows?

Lilith And if they were able to converse with one another, would they not try to name what was actually before them, but wouldn’t the names always be inadequate or inaccurate because they would be substitutions for other things or could be known only through a complex calculation of context and relations? 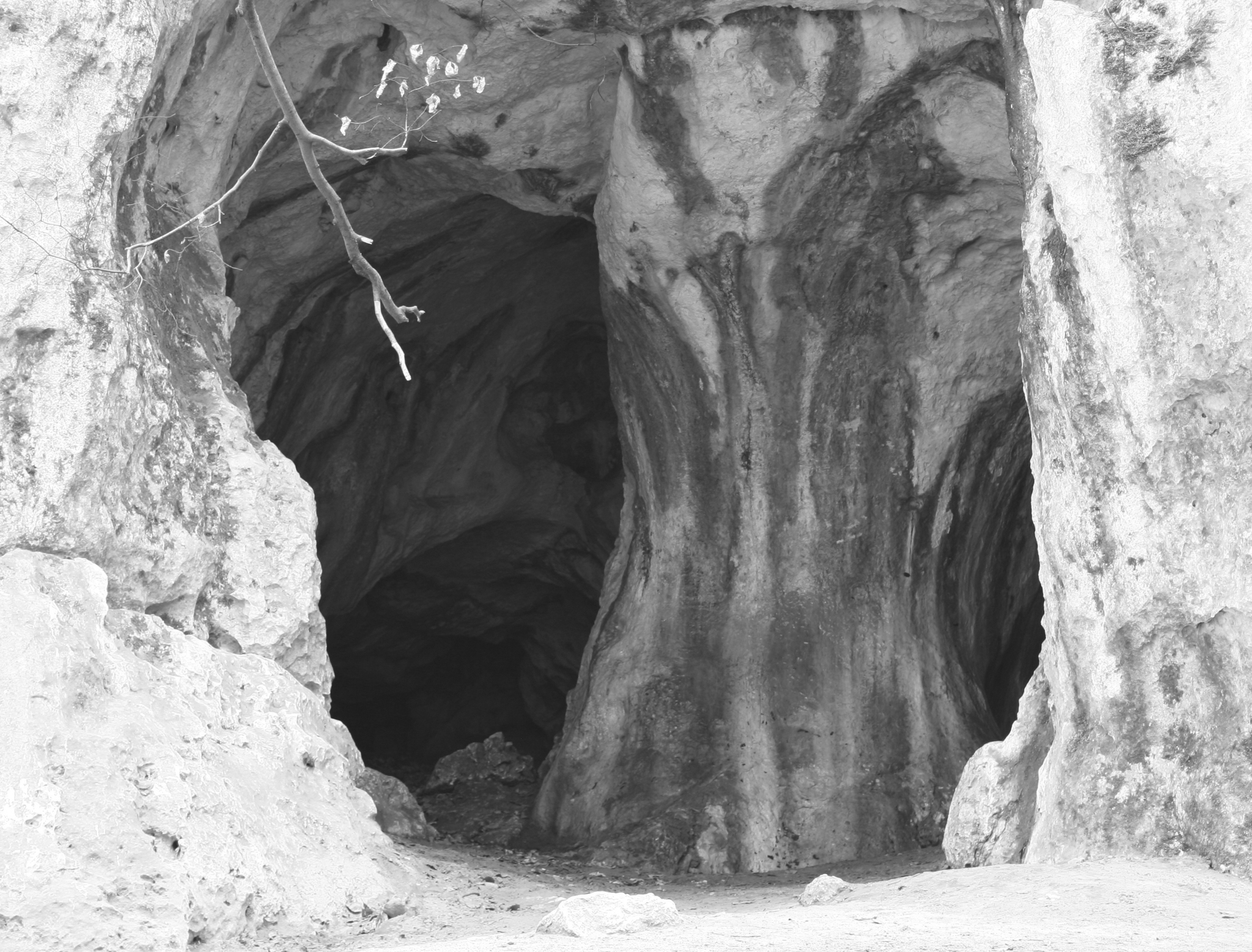 Photo taken by Wikimedia Commons user Przykuta and changed to black & white by the author. Some use restrictions apply.

Lilith And suppose further that within the so-called prison of the cave there would be echoes of others passing by who speak in voices that they can hear but cannot recognize or speak with since they only know one another through the image-shadows of the screens?

Lilith To them, I say these image-shadows are not truth, and that the truth is unknowable.

Eve That is certain.

Lilith And now look again, and see what will naturally follow if they are released and disabused of their error. When any of them is liberated and compelled suddenly to stand up and turn his or her neck away from the screens and abstractions, and walk and look towards the light and one another, he or she will find that the glare will be distressing because they will be unable to see the shadows anymore. What they see as absolute dark or absolute light will offer only an illusion. But now, when they approach the place of all and nothing at once directly what will be the reply? And, you may imagine here an instructor pointing to objects, requiring names as they pass by. Will he or she not be perplexed by the insistence on naming things when the knowledge is in process and a relationship already under way? 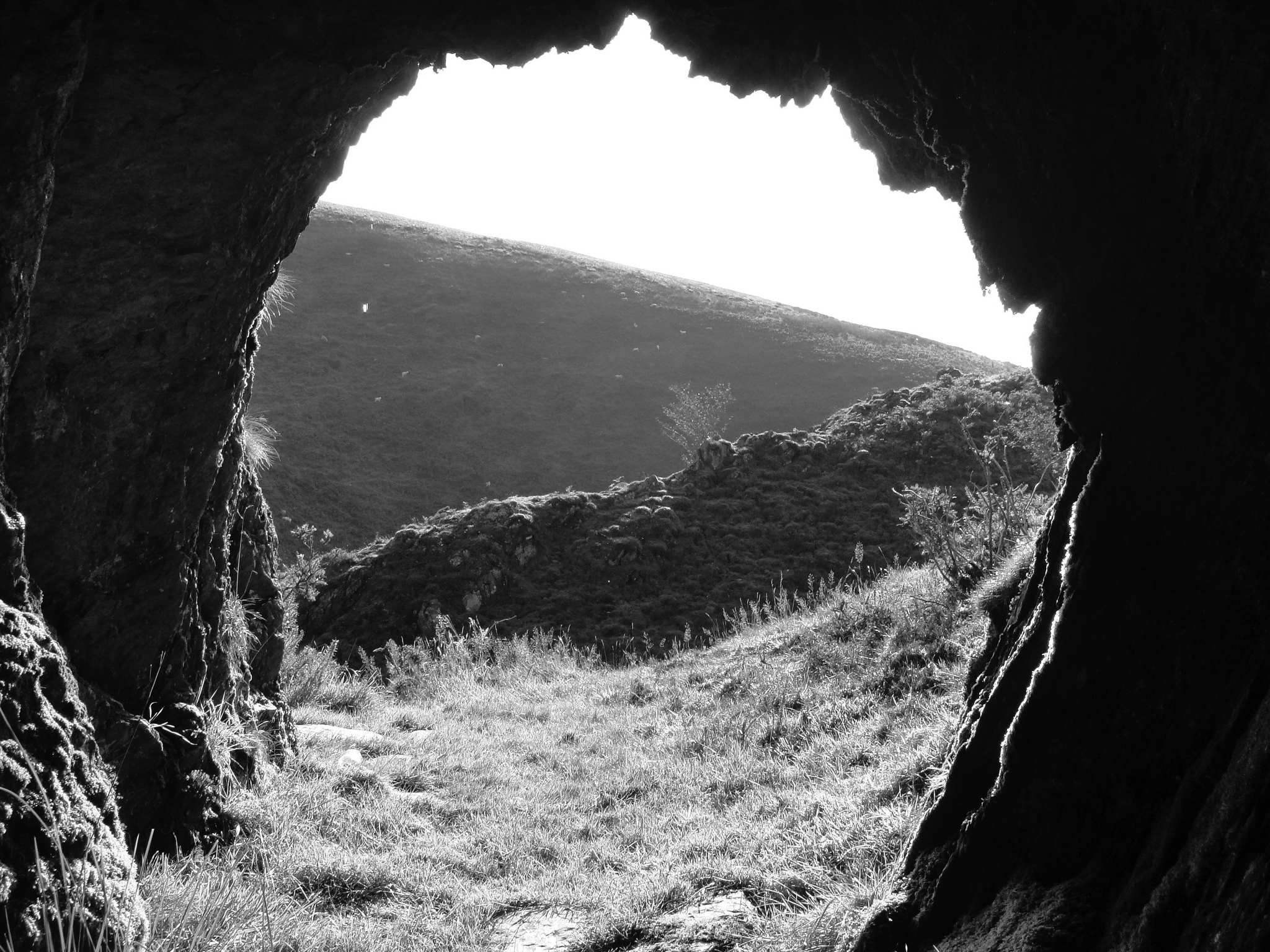 Photo taken by Flickr user waldopepper and changed to black & white by the author. Some use restrictions apply.

Lilith And, if they are compelled to look straight at the light, will they not have a pain in their eyes that will make them turn away to take in the objects of vision which they have seen but have not known firsthand until now? And when they have had too much “enlightenment” and crave again the dark of the cave, will they not return there with a new understanding?

Lilith And suppose, once more, that they are reluctantly dragged up a steep and rugged ascent, and held fast until forced into the presence of the sun, are they not likely to be justifiably pained and irritated? When they are thrust into this light and under such conditions, will they not reasonably rebel against their manipulation and demand the right to their own perception?

Eve Without a doubt.

Lilith They will require growing accustomed to sight and to taste, touch, smell, and hearing. And, at first, they will see the image-shadows best, next the reflections of humans and other objects in the water, and then the objects themselves; then they will gaze upon the light of the moon and the stars and the spangled heaven; and they will see the sky and the stars, the sun and the light?

Lilith They will be able to feel the sun, and not merely see reflections of it in the water. They will share the sun and the earth with one another and will not claim possession or dominion over either, right?

Lilith Would they proceed to argue about who directs the season and the years or who is the guardian of all that is in the visible world? Wouldn’t they understand these things to be irreducible?

Eve Clearly, once they feel the sun, they would understand that there is no need for argument and that these things are irreducible. 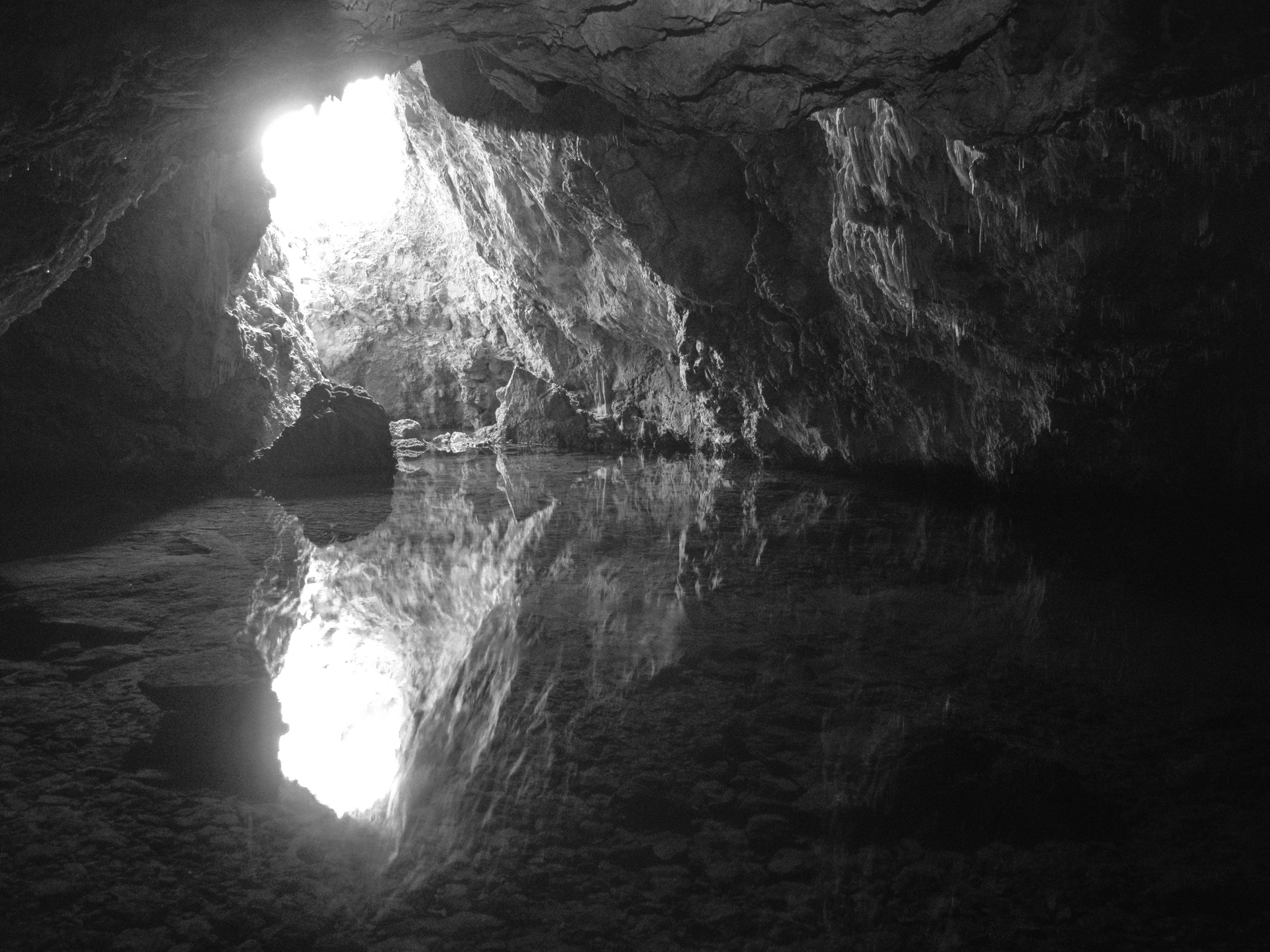 Photo taken by Wikimedia Commons user Alfie (Helmut Schütz) and changed to black & white by the author. Some use restrictions apply.

Lilith And when they remember their old habits and their fellow-prisoners, do you not suppose that they would share their new perceptions and insights with one another as a form of fellowship and love?

Eve Certainly, they would.

Lilith And if they were to understand that no one person is necessarily better able to draw conclusions regarding knowledge or the future because these things can belong to everyone (depending on perspective and circumstance), wouldn’t they choose to live with one another with this new understanding?

Eve Yes, I think that they would rather suffer exile and isolation than continue to live together with false notions and perceptions in a miserable, unequal way.

Lilith Imagine, once more, someone coming suddenly out into the sun with only “enlightenment” as a point of view, wouldn’t she exist in the same old manner, only now with the “light” replacing the “dark”?

Eve To be sure.

Lilith And if there were a contest, and people were made to compete in measuring the shadows with the prisoners who had never moved out of the cave, wouldn’t it be ridiculous? Wouldn’t they refuse to participate and invite the contest makers to follow their fears into the shadows of the cave, toward their liberation and redemption?

Eve There is no question. 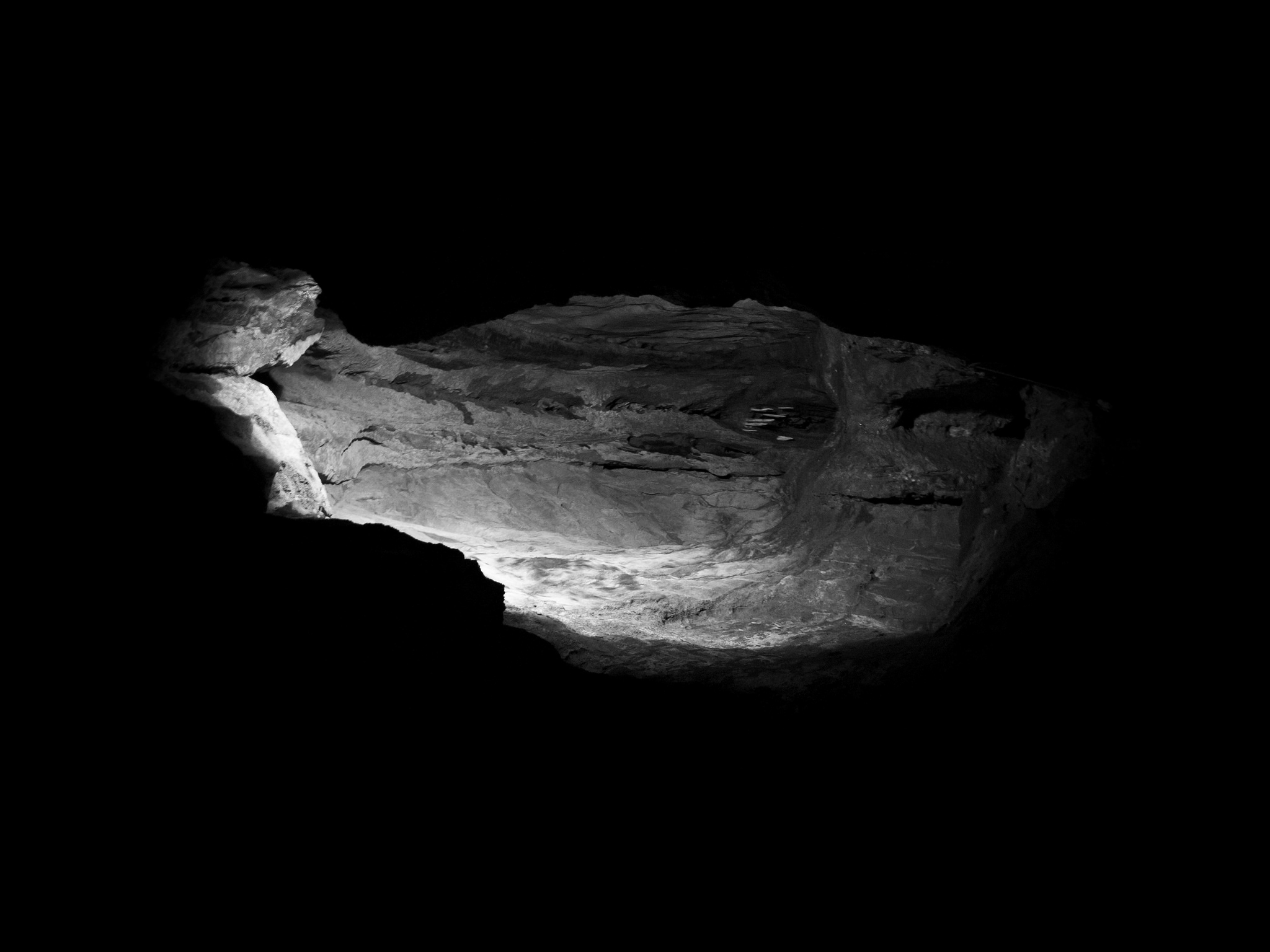 Photo taken by Flickr user Dellboyy Art and changed to black & white by the author. Some use restrictions apply.

Lilith This entire allegory, dear Eve, I have expressed whether rightly or wrongly God knows. But, whether true or false, my opinion is that the world of knowledge requires both light and dark, and that the dark brings us through to the light, much like a fertile void that ushers in life.

Eve I agree, as far as I am able to understand you.

Lilith Moreover, do you not wonder why those with this knowledge are not willing to diminish human affairs; for their souls do not hasten to ascend to some upper world? Rather they desire to dwell within this one.

Eve Yes, this is a very natural desire.

Lilith And is there anything unnatural in passing from contemplations of the divine to thoughts on the evil state of humankind?

Eve Anything but unnatural.

Lilith Certain professors of education must be wrong when they say that they can put knowledge into a soul that was not there before, like sight into blind eyes.

Eve They undoubtedly say this.

Lilith Our discussion shows that the power and capacity of learning exists in the soul already and that it is not simply transmitted.

Lilith And is there not an art that shows us the things we cannot name?

Eve Yes, such an art may be presumed.

Lilith Yes, and there is another thing, which is likely, or rather a necessary inference from what has preceded, that both the uneducated and those who never make an end of their education will be able ministers of Life because there is no need to compare or compete in this regard.

Lilith Then, in the business of Life, the light and the dark, sacred and profane, desire and thought, among other complexities, will be visited upon us equally, and this knowledge will be given to us in the same distribution. It will not require any means of enforcement or suppression. It will just be.

Eve What do you mean?

Lilith I mean that we are in that knowledge. 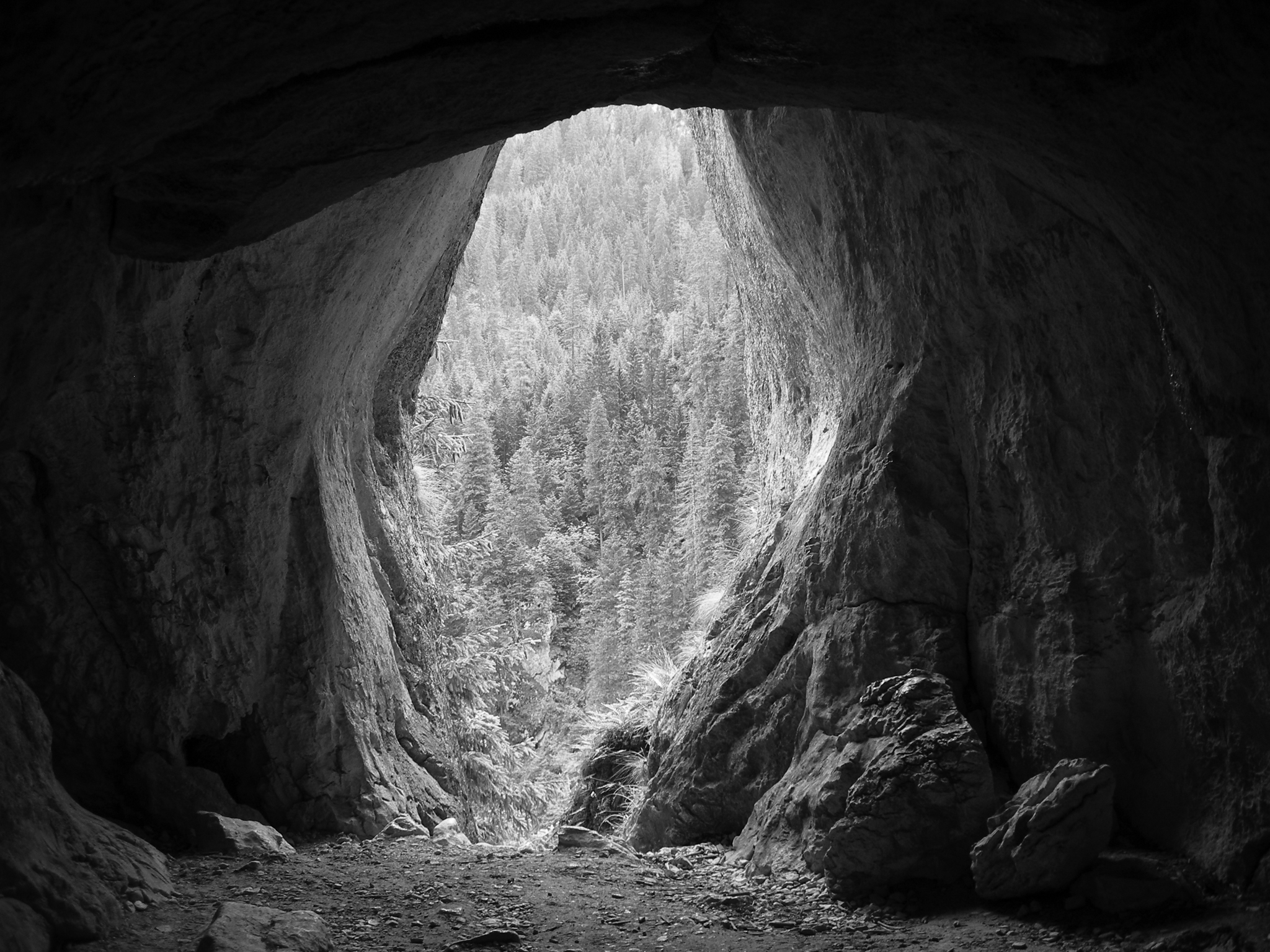 Photo taken by Wikimedia Commons user EMeczKa and changed to black & white by the author. Some use restrictions apply.

Lilith You have again forgotten, my friend, that Life is to be affirmed not controlled.

Eve True, I had forgotten.

Lilith Observe, Eve, that there will be no injustice in compelling one another to have a care and providence of others. Wherefore each of you, when your turn comes, must go down to the general underground abode, and get the habit of knowing in the dark. When you have acquired this habit, you will understand Life ten thousand times better than before, and you will know what the image-shadows are and what they represent. And, thus, yours will be a reality, and not a dream only.

Lilith And will our pupils, when they hear this, refuse to take their turn in the cave because they are afraid?

Eve Possibly, for fear and desire often impose upon us a heavy sacrifice, but this is a stern necessity that also teaches us a remarkable lesson.

Lilith Yes, my friend, and there lies the point. We must contrive for our future another and a better Life than that which we have inherited in order to share in its true blessings.

Lilith And ought we not to be lovers? For in love, will we not find ecstasy?

Eve There is no question. 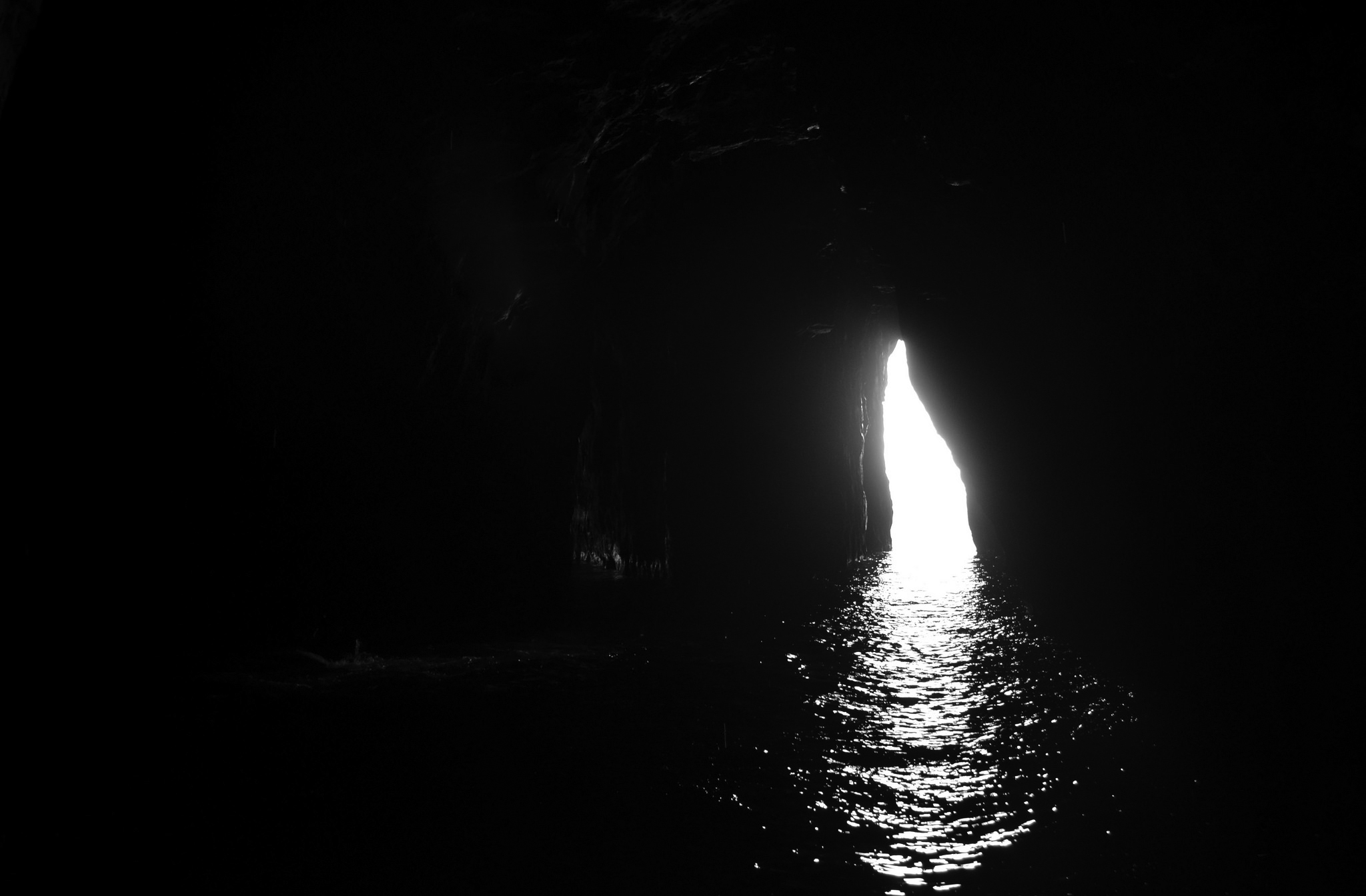 Photo taken by Flickr user Erik Levin and changed to black & white by the author. Some use restrictions apply.

Lilith Who then are those whom we shall compel to be guardians?

Eve We are our own true guardians.

Lilith And now shall we consider in what ways we become lover-guardians?

Eve By all means.

Lilith The process, it is not the turning over of an oyster-shell, but instead the turning round of a soul, a community, a society, with which we affirm Life?

“Plato’s Cave Lilith’s Cave“ is a rewriting and reimagining of Plato’s “Allegory of the Cave,” found in Book VII of The Republic. This version features a dialogue between the figures of Lilith and Eve, the first two women according to Hebraic mythology.
Tags: caves, Feminism, Philosophy