Paris in Hopper and Back

“Paris in Hopper and Back” first appeared in Olivier Brossard’s French translation in the October 2012 issue of Télérama, on the occasion of the Edward Hopper exhibition at the Grand Palais. Bill approached me with the idea of publishing his original text on Open Space in early June. Of course I said yes! Gordon Faylor and I made only minuscule edits, with Bill’s approval. It was such a great pleasure to work with him, and we’re honored to give this lovely work its English-language debut. –clr. 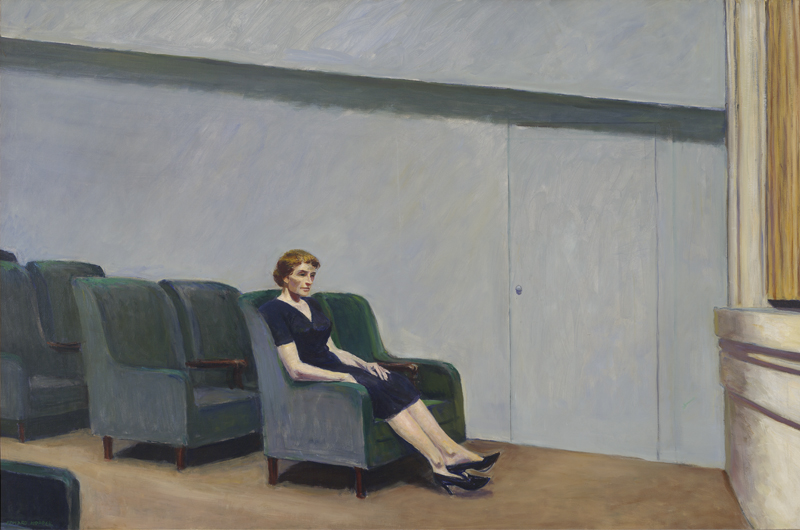 Among Edward Hopper’s most loveable pictures are the ones he made in Paris when he was in his twenties. He painted the city in a broad Hudson River light, like that of Nyack, his hometown. New York, where he had just been, was all brown and black. In Paris, he wrote, “everything seems pitched in a milder key.” Paris never looked as it does in Hopper’s paintings of it.

During his first visit he lived, as arranged by his careful mother, in an Evangelical Baptist mission at 48, rue de Lille, near the rue du Bac. Working plein-air, he tried out and quickly discarded the choppy strokes of late Impressionism and then went about painting buildings, streets, bridges, and pavements with uncanny colors in long, smooth sweeps.

He was happy in Paris, which was to him “a most paintable city.” The time he spent there in 1906–7 and again in 1909–10 was when the real Edward Hopper, the imaginative realist painter, first emerged — when he began doing, as he said years later, “more the kind of things I do now.”

He knew Patrick Henry Bruce from their days as students of Robert Henri in New York but he otherwise stayed clear of the American avant-garde community —Gertrude Stein and all — that had gathered in Paris by that time. At the same time, he found company in French poetry; he illustrated Hugo and read deeply in Baudelaire, Verlaine, Rimbaud, and Mallarmé.

Hopper said he wanted his art to be a record of his emotions. He approached what he saw from a clinical angle. Cézanne was too flimsy for him; it makes sense that he admired Courbet and also Degas, and among the Americans, Winslow Homer.

James Schuyler called Rooms by the Sea “a prototypical American painting, a signpost to the future: tense walls, calm, fat furniture, a complex of shadows and apertures, the unregimentable arithmetic of the ocean.”

Hopper’s paintings strike chords. Their typical notes are a room or exterior view with not much detail, one or two people, and light. There may be functional things — a lighthouse, a chrome coffee urn, a typewriter or red gas pumps — few of them put to any visible use.

Recalling his early days as a commercial illustrator, Hopper said, “I was always interested in architecture, but the editors wanted people waving their arms.” As Gail Levin commented, “He apparently chose to paint buildings not for their beauty but for their fascinating forms — a rather abstract sensibility that he tried to deny when it was brought to his attention.”

Hopper’s perceptual field was irreparably broken into what, for him, could and could not be painted. He could paint sunlight on inanimate surfaces like no one else of his time, but his views of the sea and grasses are unconvincing — his grasses always seem to be rushing off somewhere — and the skin on his figures, uncomfortably rough and on the verge of flaking, is always at odds with their settings.

“His mind was composed of fatalism, detachment, and a steady curiosity. Frequently he looked quite baffled. Sometimes one had the impression he was surprised to find himself inside his own body, as if he had grown up, a separate object, around him.” — Brian O’Doherty.

As it happens, the San Francisco Museum of Modern Art lucked out in 2012 by acquiring Hopper’s great painting Intermission, (1963) although at the unfortunate expense of giving up at auction a no less intense, earlier, atypical one, Bridle Path, done in 1939. 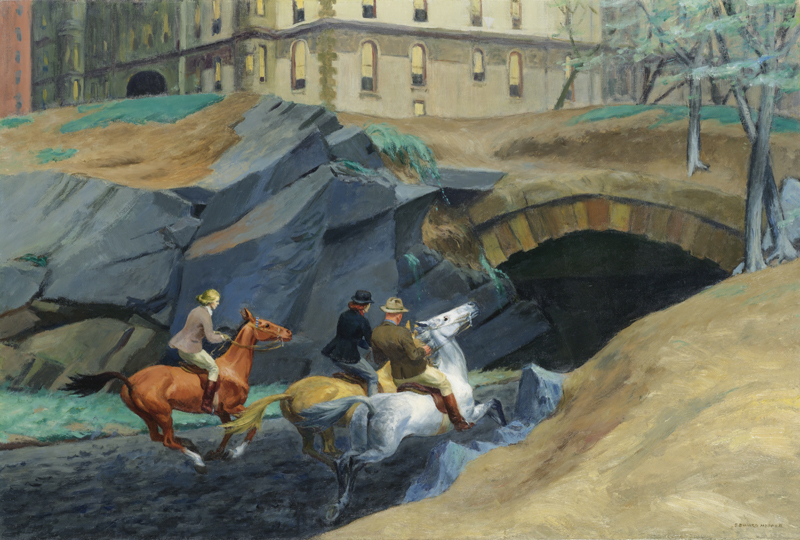 Smaller than Intermission, Bridle Path, with its three riders approaching an arch in Central Park and about to plunge into the blackness beneath, is a complex, anecdotal, somewhat scary picture; Hopper himself was especially proud of it, perhaps because the image gave him a lot of trouble at first.

Intermission shows one low blue wall with an overcast strip of slate-blue shade cast from an overhanging balcony and, extending along the balcony, a facing of the same light blue; in the middle ground are a rack of blue-green wearily upholstered theater seats in rows along a barely slanted mocha floor, and, a little left of center, a middle-aged woman in a blue-black dress and black shoes sitting alone in an armchair on the aisle. In the foreground on one side is the arm of an empty chair and on the other, curving away, is a corner of the stage. About this woman, whom Hopper nicknamed “Nora,” Jo Hopper commented: “She is not the kind to slip feet out of long reasonably high heeled pumps.” The relationship between the woman, the cream-colored stage, and the door subtly carved into the wall between them is intriguing.

Hopper is famous for static atmospheres like this where everything holds its breath but the picture itself is breathing quietly. He packs the bulk of a possible story (the tale of a possible life) into one suspended moment. He was crazy about fact, about realizations that sneak up on you and stay.