– these notes were compiled as research and points of departure for the upcoming conversations i am having with artists to be featured here on open space in the coming months. through writing, visual media and music composition all of the people being interviewed have in common aiming for a third space in which new possibilities can exist. their practices map new locales, create new borders and straddle in-between lines.

the somewhat frantic organization, full of links (that will neatly open for you, in a new tab. so go ahead and click) and imagery, mimics to some extent my process of going about compiling information and inspiration for these talks. they also function as the preface to the narrative that connects my (hi)story to the ones i will be encountering through these talks.

– in 1494 spain and portugal signed the treaty of tordesillas, an imaginary line that ran 370 degrees west from the  portuguese colonized cape verde islands, located off the west coast of africa. after the portuguese crown becoming dissatisfied with the inter caetera papal bull issued by pope alexander vi, it was re-negotiated with spain that the lands to the east of the line would belong to portugal and the lands to the west, to spain. 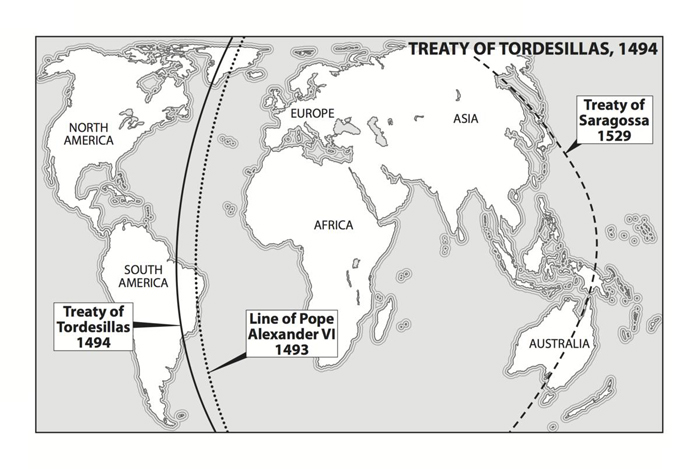 – “The migrations. The flight from tedious states. Against urban scleroses. Against the Conservatories and speculative tedium…  Before the Portuguese discovered Brazil, Brazil had discovered happiness… Down with the dressed and oppressive social reality registered by Freud, reality without complexes, without madness, without prostitutions and without penitentiaries, in the matriarchy of Pindorama.” Translation of Oswald de Andrade’s “Manifesto Antropófago,” Revista de Antropofagia 1:1 (São Paulo, May 1928).

– the rift one experiences through irl border crossing and subsequent immigration is permanent and ever shifting. the here and there becomes the in-between. many times the experience of statelessness settles in. one’s patience with the need for identity, usually required by the non-immigrants that inhabit the new place, runs scarce. stuck where no one else can come or go, the need for a third space is immediately felt.

– “My point of departure is that nationality, or, as one might prefer to put it in view of that word’s multiple significations, nation-ness, as well as nationalism, are cultural artifacts of a particular kind. To understand them properly we need to consider carefully how they have come into historical being, in what ways their meanings have changed over time, and why, today, they command such profound emotional legitimacy.” Benedict Anderson, Imagined Communities, Reflections on the Origin and Spread of Nationalism, p.4, Verso, New York, 2006.

– “The man, who has equipped himself with many things for his journey, spends everything, no matter how valuable, to win over the gatekeeper. The latter takes it all but, as he does so, says, “I am taking this only so that you do not think you have failed to do anything.” During the many years the man observes the gatekeeper almost continuously. He forgets the other gatekeepers, and this one seems to him the only obstacle for entry into the law.” Franz Kafka, “Before the Law.”

– “What would a world without national borders look like? There’s a good chance it’d look very similar to the one we have today. Parag Khanna is a global strategist who believes borders are becoming irrelevant in an increasingly connected world. More than national boundaries, he believes what matters are the connections between cities.” “Why Borders are Becoming Irrelevant,” To The Best of Our Knowledge, http://www.ttbook.org/

II- the artist as a cartographer, using craft to reveal the borders and hidden locales.

– “On that map, made in the style of baroque panoramas, the area of the Street of Crocodiles shone with the empty whiteness that usually marks polar regions or unexplored countries of which almost nothing is known. The lines of only a few streets were marked in black and their names given in simple, unadorned lettering, different from the noble script of the other captions. The cartographer must have been loath to include that district in the city and his reservations found expression in the typographical treatment.” Bruno Schulz, The Street of Crocodiles, The Fictions of Bruno Schulz and Sanatorium Under the Sign of the Hourglass, p.69, Picador, London, 2012.

– “The haunt demarcates the extensive or outward bond between the living and the dead.” Reza Negarestani, Hauntology, or a Shady Vitalism, (n.b. when clicking on this link, your computer may warn you it is unsafe. it is not. all you will encounter is negarestani’s blog)

– on december 14th, 1999 readers of the (london) times were greeted on page 1, by an advert by the international necronautical society. it contained the group’s founding manifesto. in the ad, the group extrapolated on its intent to map, colonize (really? this word needs to disappear) and occupy death as a space. they hoped to find “behind the signifier ‘death’, envisaged space: a space of transit and transition, marks and traces, a provocation to cartography.” International Necronautical Society, Tate Declaration on Inauthenticity.

ins, started by artist and writer tom mccarthy, deploys a network of philosophy, art, fiction, comedy and media to expand its mission. declaring all of us necronauts since we carry death within, the group insists upon an embracing of matter in all its matter-ness. thus a subsequent abandonment of all idealism in art should be adopted in lieu of navigating a formless universe apt for exploration.

their proposition calls for all the necronauts involved to make visible and enter the space by developing a new language in cartography, strategies to collapse demarcations of time and the development of an anti-matter poetics. it posits the artist as a smuggler, pillaging a space that has in modern society, remained out of reach and enmeshed in society’s resistance to address it.

On Truth (and Lies) in Literature from Onassis Foundation (USA).

– cocteau’s film orpheus, offers an example of this possibility of a spatial re-mapping for death through the communication between the dead poet cégeste and orpheus. this time death is located as a combat zone where encrypted messages are sent through a car’s radio.

– “Such cultures of a postcolonial contra-modernity may be contingent to modernity, discontinuous or in contention with it, resistant to its oppressive, assimilationist technologies; but they also deploy the cultural hybridity of their borderline conditions to “translate,” and therefore reinscribe, the social imagination of both metropolis and modernity.

Being in the “beyond” of culture is to inhabit an intervening space. But to dwell “in the beyond” is also to be part of a revisionary time, a return to the present to redescribe our cultural contemporaneity; to touch the future on its hither side.’’ Homi Bhabha, In Between Cultures, NPQ Fall, 2013.

– in order to expand its own fictional lines of terror, isis has taken to salafism, an ultra-conservative reform movement which vouches for the implementation of extreme islamist beliefs to the point of self-annihilation. this can be observed by their ongoing destruction of their own historical visual culture. artist morehshin allahyari’s project material speculation, offers a way to subvert the damage by using 3d printing and modeling to re-create these destroyed and thought forever lost objects: “The first series ‘Material Speculation: ISIS’ is an in progress 3D modeling and 3D printing project focused on the reconstruction of selected (original) artifacts (statues from the Roman period city of Hatra and Assyrian artifacts from Nineveh) that were destroyed by ISIS in 2015. “Material Speculation: ISIS” creates a practical and political possibility for artifact archival, while also proposing 3D printing technology as a tool both for resistance and documentation. It intends to use 3D printing as a process for repairing history and memory.”

– “Afrofuturism, then, is concerned with the possibilities for intervention within the dimension of the predictive, the projected, the proleptic, the envisioned, the virtual, the anticipatory and the future conditional. This implies the analysis of three distinct but partially intersecting spheres: first, the world of mathematical simulations; second, the world of informal descriptions; and third, as Gilroy (2001) points out in BetweenCamps, the articulation of futures within the everyday forms of the mainstream of black vernacular expression.” Kodwo Eshun, “Further Considerations on Afrofuturism,” p. 293, The New Centennial Review, Volume 3, Number 2, Summer 2003, p. 287-302, Michigan State University Press.

they describe themselves as “poor & working class/low income, queer, trans, survivors, mothers, professionals, non-academics, glorious, amorphous border-walking space-dreaming city folk of the African/Caribbean/mestiza/European diasporas. We at METROPOLARITY believe that those without power must take advantage and control of the media outlets that we have access to. We choose science fiction as our prism to manifest world-paradigms necessary for our survival. We are destroyers and resurrectors.” they came together as a way to merge their common interests in the context of their urban realities while fully participating in their community. for them speculative fiction is used as a means to empower and question, and unlike the more conventional sci-fi it is not always bound in futuristic narratives.

A faerie commune in deep space; street corner kid as astronaut; man in bodega as a disembodied spirit. We present this as offering space for new visions and imaginings of identity among the disenfranchised, entwined in the arena of new beginnings.” Metropolarity, Herald.

(the metropolarity talk starts on the 1:07:31 mark in this video)

– the most permissive of border crossings may be through the ones situated around abstract spaces. composer, writer and scholar curtis roads has created a whole new spatial vocabulary through the use of sounds that are shorter than notes (microsound) and by the breaking and reorganizing of sounds into tiny grains (granular synthesis). his sonic output is some of the most inspired in the recent history of electronic music composition. he has written books and software that allow others to expand on the territory. musicians such as autechre, aphex twin and richard devine have all made use of roads’ software in their music.

attending a performance of his own music is like entering a neoteric land where sounds have been assigned new identities and enabled to partake in previously uncharted narratives. his use of careful spatialization turns these events into fully experiential occasions. the audience’s perceptions can travel across these newly demarcated sound lines in a variety of ways (i recommend listening to the video below on headphones, volume on the louder side).