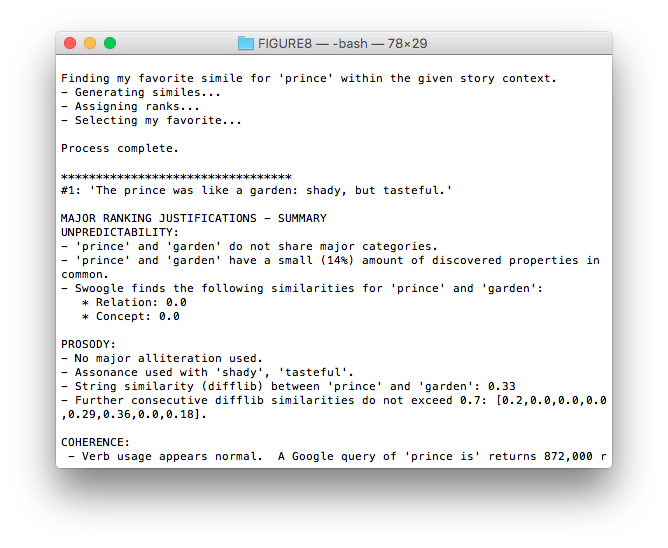 An example of FIGURE8 generating a simile.

I’m a cat lover, I promise. Not a cat lady, but I respect and value felines just as much as the next person. So it was unsettling when a computer program I wrote chose to describe snow tumbling off a roof as “falling like a dead cat.”

Such is life with FIGURE8, a simile generator I developed last year as an experiment in modeling brainstorming and revision. FIGURE8 doesn’t always generate elegant similes, but can select its favorite by considering several aesthetic properties. In seeking novelty, for instance, FIGURE8 may compare its writing with that of online authors.

Consider these generated similes for a queen:

“Flying like a white bird” sounds quite nice, and is a surprising comparison for a queen. However, a queen is more likely to stand than she is to fly. By continuing to assess qualities like these, FIGURE8 concluded that the second description was preferable.

By studying language generation, we learn about the cognitive processes involved in creation, and how humans express meaning through art. We are storytellers by nature, after all. We learn and remember concepts more easily when they’re presented in an artful form. We also bond through telling stories together, which I expect computers will be able to do with us effectively someday. At the moment, we have programs like Reid Swanson’s Say Anything, which can collaborate with humans to tell a story. It’s also not difficult to generate something today that people will mistake for a human’s work. Once computers fully grasp creativity, they should be better equipped to communicate and solve problems with us.

Ambivalence surrounds computer-generated art. Some maintain that creative computers will never be more than tools for human artists, like photo editing software, while others see such discussions as anthropocentric. Andrew Piper, director of a digital humanities laboratory at McGill, asserts that future computer poetry will be for machines to read — not us. These disparate opinions keep computational creativity alluring. 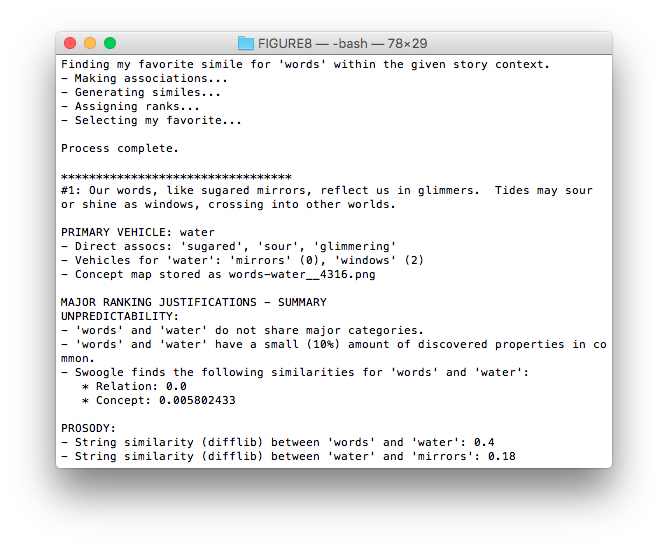 A more complex generation by the latest version of FIGURE8, which relies on knowledge of aesthetic properties and commonsense reasoning.

For my dissertation, I’m studying how creative technology can serve education. Heather Shearer, chair of the writing program at the University of California at Santa Cruz, says that her students often “think all essays are the same, and that they’re only going to write one kind of essay.” To facilitate genre and style discovery, I’m building an interactive system that permits narrative complexity adaptation. Hopefully, resources like these will help students expand their notions of what a story can be.

Some of my pilot testers say working with FIGURE8 illuminated their writing preferences and goals. Researching natural language understanding has influenced how I think about writing, too. While computers may not always find the perfect solution, they can often find a large number of possible solutions to consider. They also have different ways to interpret the same problem, including the use of evolutionary algorithms, pattern matching, and statistical models. When I encounter obstacles now, I can view them through the multifaceted lenses of a creative machine. 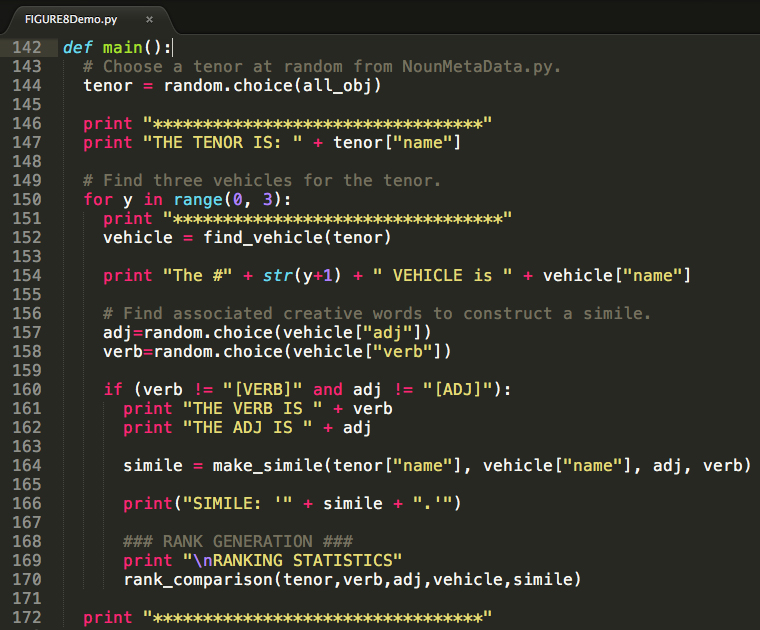 I made a small demo for my students to demonstrate how FIGURE8 works. You can view the code and generate your own similes here.

I’ve also learned how our perception is shaped by process, presentation, and context. Making an effort to understand these elements connects us as creators, but art can affect us even when such features remain unclear. We still search for meaning based on our experiences, and create idioms out of parts that are memorable, if not always pleasing. “Like a dead cat” has stuck with my friends and colleagues, and I’ve heard some use the phrase to describe unwanted surprises.

What we read shapes our future, regardless of who is holding the pen. It seems FIGURE8 would agree, given its latest observation that “words may be mirrors, but strike us like sparks.”