. . . everything depends on what they think of dancing.

It is abstract in electronic text. Not as much for the ones clapping.

They: The ones sensing dancing (here, in hands.) Because dancing, body in movement sensed by others, is continuously enacting public infancies.

The utricles of populaces in formation. They will wake up one day and be like: fuck, something’s different. The something was modeled weeks, or months, or years ago by the dancing. Potential aggressions and passivities, gathered by the collective pelvic floor, which is a giant face, absorbed by the intercostal mesh, which is distributed radar. The world’s oldest profession: mime. 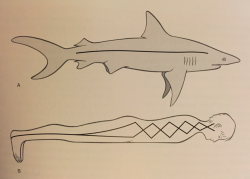 And, the dancing too issues the publicity of all infancies that have ever entered their pluribus. Dancing retrieves kinesic contexts of care and coaxes them into gestural jurisprudence. Recapitulating prepolitical movement. Not that an infancy is natural, or pure or even young. It’s just a familiar way to speak of the future in its fledge and flect.

The mutatory line of ligature from peristalsis1 to skin to inflection to assembly. It details the verge of civic faculties.

Infant publics are achieving zoësis every time someone dances and is sensed doing.

Formative moments for the polis. What happens now will shape them forever. “Every gesture becomes a fate.”2

An order based on a newish nuance of tonus. They must be careful with their dancing at the same time as they must abandon themselves to it.

Diplomacy not-yet-named. Early body legislating inertia of yearns. Bodies demand, again and yet again, their creation. No dancing is new, only early or late.

But before the word there is some version of motility.

Some extroversion, or diversion, or perversion. Some particular towards.

Gestures in search of their interpretations. Vicars of sense. Their majesties the squirms scrambling for thrones.

It’s always a hideous translation. To eke some grammar out of the corporal surround. Prima assonance assoluta.

There has been a generalized catastrophe of the gestural sphere.

It might have started with the grid. Which lineated the perspective of the dance.

It then continued with the appropriation of motor schemas.

It might have started earlier with the transformation of the general character of social dance into fascicles of monads.

In any case it resulted in the extradition of the good-enough-dancer — to the chaparral of unclaimed spasms, to the orphanage for neglected modulations.

What are left are mostly bad dancers and phantastic dancers. And by left I mean at-large in the image-archive.

Yes, for sure. it’s fairly simple, what I’m saying, despite the baroque vocab (which is a dancing longing): everything depends on what they taste in dancing, since kinesthetic preference, multiplied, forms the ground of mass assumptions. Like, remember, the surging ground of taste for this dancing’s crucial glory of good-enough?

I’m trying to describe the volume of dancing by people I trust. People who care to offer so much in movement — so much more than blank — yet stand throbbing as sentries at the gate of the phantastical, admonishing, without boomeranging back to bad.

These people do the hard work of inflecting surplus without appropriation.

The good-enough dancer, on the other hand, is not interested in origins, but only in infancies — in a care-curve for the economy of animation in the spectator’s lifeway:

Paul Valéry, Philosophy of the Dance.

The good-enough-dancer starts with an almost complete adaptation to the spectator’s needs, and as time proceeds adapts less and less completely, gradually, according to the spectator’s growing ability to deal with the dancer’s failure. 3

A dancerly failure is not just any, but is an error-labor a few degrees south of fun.

The spectator makes use of the dancer’s failures. Through these, the spectators are encouraged by the dancing body to be interested in themselves.

Not emancipated 5 but casually reminded, and more and more, that viscerae are in dialogue across individuals, who are not vessels, but reticulations. More is visible than we think. An adequate, unheroic empathy holds.

The spectator hardly notices the dancing — is instead held by it.

With the care the spectator receives from the dancing, there begins to develop what might be called a continuity of impetus. On this basis spectatorship gradually develops into a good-enough politics.

If dancerly care is not enough (or is too much) then the continuously impetuant spectator does not come into existence.

That is, the unruly spectator — who is aware of the labor of dancing, of the dancing in labor.6

Instead a politics is built on the basis of reactions to hallucinated bodily invasion.

Millions of virtual dances are generated in reaction to such an invasion. Dancing without holding. 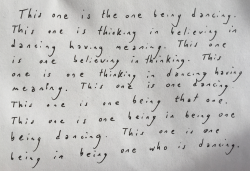 Gertrude Stein, from “Orta, or One Dancing”.