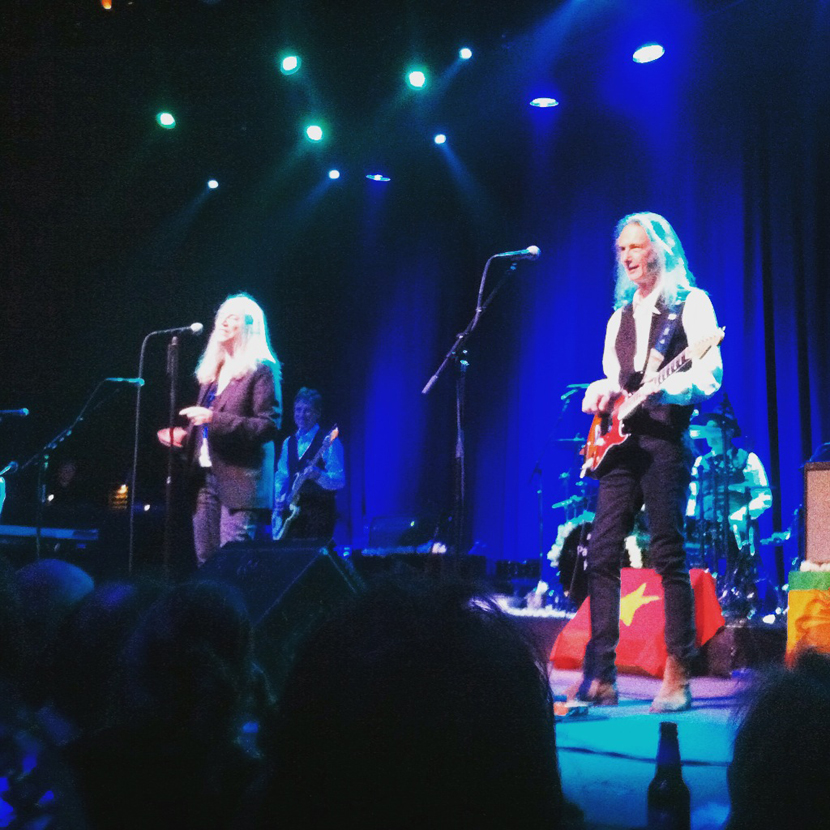 I don’t usually do New Year’s Eve in public. Too many drunk people. And everyone barfs at the end. But this year happened to be different, as I had tickets to see Patti Smith at the Fillmore.

One thing I dislike more than drunk people are hippies and hippie music. So I felt fairly bummed when Patti Smith’s band (sans Patti) opened the show. Dressed in an assortment of headbands and fringe, they played a set of Summer of Love hits, like The Byrds’ “Eight Miles High” and The Youngbloods’ “Get Together.” They are an absolutely top-notch band, but I am completely allergic to this music. I have had it crammed down my throat my entire life and to make me have to listen to it before I could see Patti Smith felt cruel and uncalled for.

So I entered the abyss that is my cell phone. I was liking everything on Instagram when I heard the opening notes of Jefferson Airplane’s “White Rabbit.” I looked up and there was Patti Smith, in a stocking cap and an oversized black hoodie, flashing a (ironic?) peace sign. She looked as annoyed as I felt. She adjusted the mic stand, hocked a loogie, and the energy in the room transformed. It helps that “White Rabbit” is actually an amazing song and Patti sang the shit out of it. It also helps that Patti is maybe the coolest, most charismatic person on Earth. Maybe every hippie anthem could be taken to this level of danger and sexiness if Patti sang it? The crowd went nuts and she left the stage, taking that sweet dark energy with her. The band finished their set with a couple more feel-good hits.

Half an hour later, they returned, now dressed in crisp white shirts and black vests. Patti, finally with them, was dressed the same, but with a black blazer and motorcycle boots.

The band’s job tonight was to play the entirety of their album Horses. Patti opened their performance by reading the poem on the back cover of the album. When she reached the line, “as for me i am truly totally ready to go,” the crowd roared, but it didn’t turn out to be true. The first two songs, “Gloria” and “Redondo Beach,” were not truly totally ready to go, as both were marred by sound monitor failures and audience members passing out, the latter forcing the band to stop. Patti jokingly (?) compared this show with Altamont.

The band finally fell into place with “Birdland,” and then shit got launched into the stratosphere from “Free Money” through “Land.” Somewhere in this block of songs, Patti gave us a ROCK sermon. It was a dark, fire-and-brimstone sermon, where no president is going to save you and where “2016 is going to be a fucked-up, dirty year and [she’s] ready for it.” It was ferocious. I felt straight-up bananas: screaming, fists in the air. And I’m usually one of those folded arms, too-cool-for-school type concert goers. Then another audience member passed out.

“Elegie,” which closes the album, was atmospheric and hypnotic. During the song, Patti recited the names of dead people that were our (mostly) heroes and her (mostly) friends/lovers. I realized that almost all of them were white rock stars, but it was still a very emotional moment. It was also strange, like watching the Oscars when they show the clips of people that died that year and the more famous they are the more cheers the get. Patti’s late husband Fred “Sonic” Smith didn’t receive nearly as much applause as Lou Reed or Lemmy. I wonder if that feels shitty for Patti. One last thought: Patti should do “Elegie” and have it build into a cover of Jim Carroll’s “People Who Died.” That would be incredible, right?

They went on to play a few non-Horses classics like “Privilege” and “Pissin’ in a River.” At 11:50, Patti announced that we had “ten more minutes of a living hell.” To kill time, Patti led the audience in the Aqua Teen Hunger Force theme song and the clock struck midnight. Happy New Year with balloons, confetti, noisemakers, hugs, kisses, and champagne. The band played “Because The Night”, which might be the most appropriate post-New Year’s Countdown jam ever. I mean besides “Auld Lang Syne.”

More songs happened and another Patti ROCK sermon happened as well. This one threw me off, as it was (and I’m paraphrasing) about how love is the answer to our problems, societal problems. How we need to fight with love as our weapon. “Love?” I thought, “What about that dirty, fucked-up year thing and that living hell thing?” I was confused by this new message. It sounded like a typical, out-of-touch, Bono-esque, crowd-pleasing rock star thing to say. But Patti isn’t Bono, so what the fuck is this shit?

Slowly, it hit me: we were witnessing a true and conflicted artist. This isn’t bullshit to her. See, she knows about darkness, isn’t afraid of it and is strong enough to walk (and guide us) through it. But she also lets herself believe in the hippie dream, that love is all we need. Admitting contradictions shows vulnerability. And the fact that she is willing to be vulnerable, instead of simply hiding behind some rock persona, is what (I think) keeps her relevant as an artist.

The band closed the show with “My Generation,” which morphed into a lengthy, feedback-heavy odyssey. Patti put on a Stratocaster, played some bullshit, and then symbolically and theatrically ripped its strings off. It felt a bit too staged/planned out for me. But, to be honest, I was — at this point in the night — tired, sick of standing up, and truly totally ready to be wearing sweat pants. My rock dream fulfilled. Feedback from the guitars continued to buzz and linger as the band walked offstage. Show over. A little later, Patti came back onstage, smiling, handing out buttons, and waving goodbye.

And then I walked to BART, where everyone barfed.