Series Five-Tone Kit
Five-Tone Kit
Impermanent Collection
Organized by Gordon Faylor
This five-part series — named after a section of composer Lou Harrison‘s (1917-2003) Rhymes With Silver — pairs an image of San Francisco from the SFMOMA Collection with a piece of music also created in or indebted to the Bay Area at large. Subjectively construed, open to intimacy and conflict, these selections are fleeting studies in aural-geographic-temporal synonymy and disjunction. They’re also intended for the weekend, toward whatever end/opening. 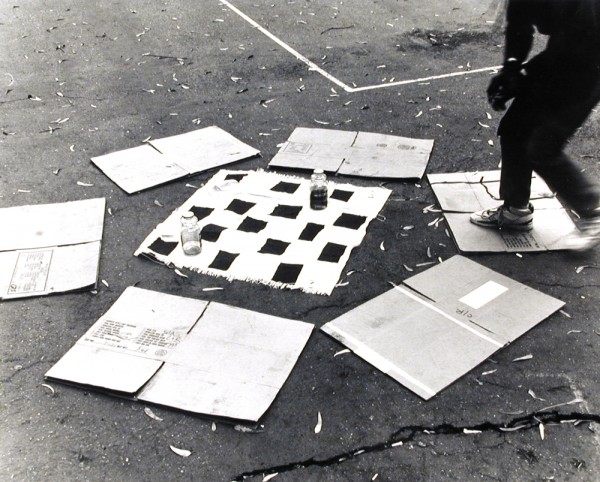 For the last installment of “Five-Tone Kit”, we’re East Bay-bound.

In the West Oakland of 1993, photographer Lewis Watts captured an unusual street (park?) installation by an enigmatic “Joe”.

1993 was moreover a remarkable year for hip hop in the Bay Area and across the country. From Wu-Tang to A Tribe Called Quest to Tupac to the Alkaholiks to De La Soul to E-40, it represents a crucial time in the history of an ever-evolving artform. Notably, it’s an Oakland group that is credited with the most enduring slogan of that time: “93 ’til Infinity“.

That group, Souls of Mischief, remain part of a larger East Bay hip hop collective, Hieroglyphics (still going strong), which also includes MCs like Del tha Funkee Homosapien and Casual. Above, Casual performs a track off of 2004’s The Hierophant at Amoeba Records in Berkeley, bringing some special guests with him.

Obviously, this series has only scratched the surface. The Bay Area’s musical history is a complex one, rife with overlaps and anomalies. A helpful (albeit mostly defunct) resource on Bay Area experimental music history can be found here.

Surely the musical/sound art landscape of the Bay Area will continue to change and grow in unpredictable ways. But as the late Robert Ashley — another one-time Oakland resident — put it: “the landscape has to be there.“