Darkness at the Edge of Town: Steve Polta on Lewis Baltz 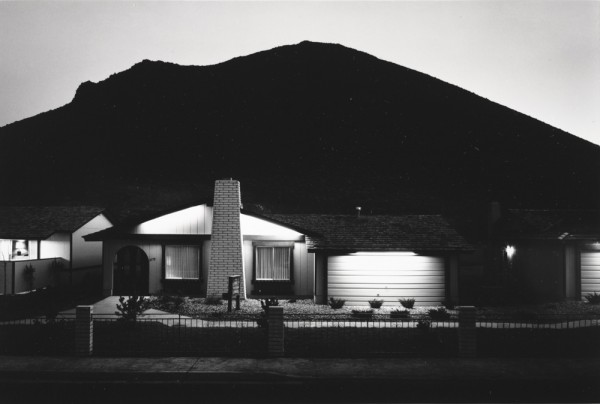 In their totality, the series and surveys of photographer Lewis Baltz detail an entropic world of chaotic construction and semi-domestic (and semi-domesticated) landscape. He is known for black and white photos which depict a humanity-free, dead/dying landscape with faux-objectivity and clinical silence. Embodying true nastiness and anger beneath their fussy surfaces, Baltz’s pictures of homes and garbage contain a certain kind of subtle evil; they stare you in the eye and don’t blink.

“I used photography to distance myself from a world that I loathed and was powerless to improve.” [1]

On reading about Baltz’s death in November 2014, I was surprised by this quotation — drawn from a 2009 oral history interview — frequently cited in obituaries and referring to his early work on Southern California suburban and industrial landscapes. I had never heard this line before, and was struck by its blatant emotionality. I’d long been deeply interested in and engaged with Baltz’s work, but this made me sit up with renewed interest. It was re-inspiring, specifically in its newly revealed nihilism, coming as it was from a man whose work had seemed to me so studiously non-expressive and whose work has been treated so analytically by many of his critics. Elsewhere in the same interview Baltz elaborates: “Dealing with this [through photography] was a kind of exorcism.  It was a way […] you could at least try to make an aesthetic sense. […] It was a way of getting rid of something.”

This crazy intellectualized nihilism. The obsessive and fastidious aesthetic examination and cataloging of nothingness. So fascinating then, and so exciting to be fascinated anew after finding these new words to work around (and yes, sad to see this side of the artist only on the occasion of his death). Also a SoCal kid (twenty-five or so years behind Baltz) long before I’d heard of the guy — and long before I entered the fray of desperate urban living — I thought that perhaps I too would grow up to be a photographer, by which I mean that maybe I would wander the wasteland, document the suburban world’s houses and parking lots in snappy black and white, float in warm evening atmospheres and be a perennially lonely romantic. I thought a lot about the air above our heads and the size of buildings, about front yards as expressive sculpture and about the brackish borders at the edges of communities. Suburban architecture fascinated with its uniformity. I loved the hypothetical warmth inside homes, but the dark exteriors felt more realistic and sincere (not that I was happy about this). I was well aware that, as an architectural culture, we were communicating with aliens and gods as much as the Cahokians and Nazca. I felt a sense of (possibly misplaced) obligation to decode these messages for posterity (if not just for myself).

On discovering Baltz’s work circa 1992 — largely in the form of his mid-career monograph Rule Without Exception — I felt that I got it, or rather that I began to get it. I’m still feeling that way, still feeling like I’m getting it. It’s taking a while, but like some slow poison it continues to infiltrate and solidify. At first I felt he was simply saying, even with a whisper, “look.” A little while later I thought: He’s staring something down. Even later, I realized that there was something else at work here, something about holding a mirror up, reflecting the world back, showing the world back to the world, even if no one is there to get it. Bernard Lamarch-Vadel, in an essay included in Rule Without Exception, compares Baltz to Warhol in that both “confide to their images the exclusive task of presenting that which is already there.” [2] I believe Baltz takes the “expressionlessness” of this gaze even further, treating his images (sometimes referred to as “forensic”) as evidence, if not as evidence of crimes then as evidence of violations: violations of decorum, violations of dignity, crimes against nature, errors, evolutionary wrong turns, and just bad ideas. [3]

Baltz’s work opened a world for me that involved flatness, expressive non-expressivity, silence, repetition, organization and cataloging, inventory. The deadpan stare as a marker of disapproval made a lot more sense to me than the violent outbursts my punker friends were making — and for what it’s worth, it felt more honest. Looking at a few of these images, my thoughts wander and twist into the darkness at the edge of town…

Model Home, Shadow Mountain (1977; above): A slumping home, clearly on the edge of something, feeling somewhat warm and somewhat threatening, calming like a realist Thomas Kinkade. [4] Does a family shudder and turn on electric light against the exterior dark? Do they crawl under blankets and cower? Do they sigh and kiss goodnight? Do animals prowl their yard and kill their cats? Outside the world and the sky and the photographer hover and hesitate.

The home is like something warm and furnace-like. Can we crawl inside, place ourselves inside and therein be warmly roasted? A calm hill and a strangely glowing yet flat white sky loom over and radiate their cool presence. A cooling and hardening sky. The blankness, and something behind the blankness, something akin to the raging depressions that might be behind the walls.

Jump to the interior. Not of this house but why couldn’t it be? Evolution in reverse. 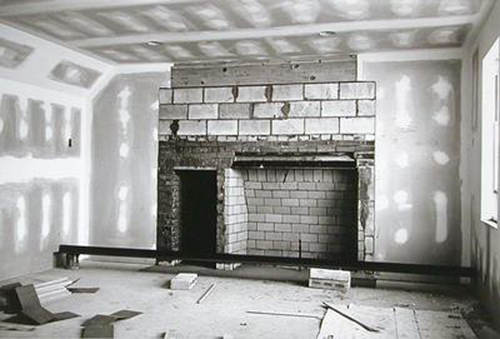 A singing interior. A ringing box. This could be an installation in an art gallery somewhere (but it’s not). Walls activated with haptic gestural daubs, the floor littered with random detritus, this chaos in contrast with the inserted pre-fab ornament (the modular faux-rustic fireplace), the long and dark cross beam — taking measure? Holding the place together? Pushing it apart? [5]

This photo recalls another of Baltz’ works, also from Park City (1980): constellations, galaxies, nebulae discovered in the walls of an unfinished home, suggesting expansiveness and containment, denial and repression of the cosmic. And an ominous central rectangle — a window opening into the world beyond, but so photographically overexposed as to appear a blank screen. It’s a site of potential, but mutely and pessimistically presented, much like an empty drive-in theater overgrown with weeds; like Peter Miller’s Projector Obscura (2005), which uses the projector as a camera in order to produce a blank movie screen; like the cinematic rectangle described by Hollis Frampton in A Lecture (1968). Of course I wouldn’t know about these works until years later — after I’d split the suburbs (and drifted away from my obsession with photography) — but the photo — like many of Baltz’s photos — seems to be waiting for someone. [6]

Down the road, beneath a similar coiling hill, wagons circle a roadhouse as evening encroaches: 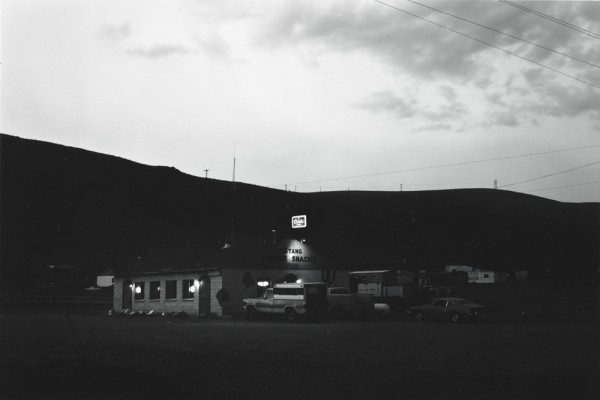 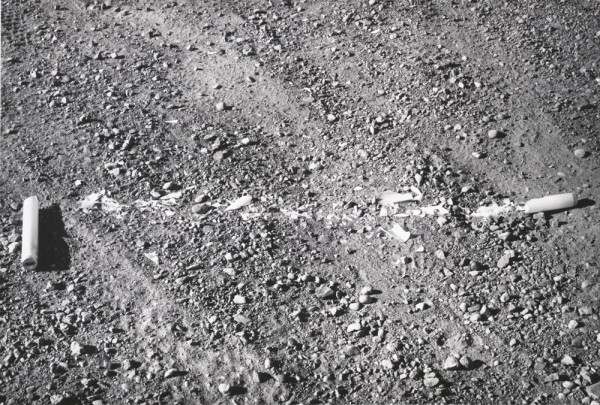 A broken glass tube as a gesture of surrender, a way of giving up. Apparently run over by a car or truck, nonetheless I imagine a gentle crushing noise as the tube gives up the ghost, shrugs itself into dust, into earth, into a line of powder marking its last resting place, as well as its former status as engineered and constructed object, as a paragon of human engineering. I imagine the gentle crush of the glass.

They say there’s poisonous gas in those tubes and that you ought not to break them. If broken, the results could be disastrous. Mercury vapor escaping with a gentle tinkling crush of glass, wafting its desolation over the world. The end comes too soon, but — sadly, asymptotically — it also seems never to arrive.

Very special thanks to Terri Weifenbach.

[2] Bernard Lamarch-Vadel (1990): “Treatise on the Suppurations of the Industrial World” (William Wheeler, trans.), printed in Lewis Baltz: Rule Without Exception.

[4] Another important figure in my personal canon (and yes I’m serious).

[5] See also: http://www.sfmoma.org/projects/artscope/index.html#r=944&zoom=9&artwork=10373 (Interior 39 from Park City) in which scraps of building trash circle like sharks beneath a dangling dining room lamp.

[6] Notably (for me), this image in turn also recalls Jeff Wall’s An Octopus/Some Beans, a diptych which similarly seems to locate the untouchable universe in a sheet of rotten plywood.

Steve Polta — sometime filmmaker, former San Francisco taxi driver — is the Artistic Director of San Francisco Cinematheque. He holds a BA in Film Studies from UC Berkeley, an MFA in Filmmaking from the San Francisco Art Institute and a Masters of Library and Information Science degree from San Jose State University. His writings on film have been published in INCITE! A Journal of Media and Radical Aesthetics; Radical Light: Alternative Film & Video in the San Francisco Bay Area 1945–2000; and UnDependently Yours: Imagining a World Beyond the Red Carpet.

Tags: Lewis Baltz, One on One, Photography, spolta