The Rumpus Pops Up in New York 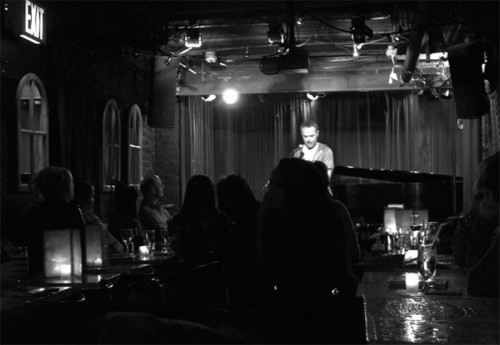 A few weeks ago here in New York, when it was so cold outside that puddles were frozen in the gutters and lethal sheets of ice clung to the sidewalks, I went to a reading put on by the Rumpus.

It was the sort of chilly hell no sane person would want to go out into.

But that clearly didn’t stop people from going; all of the tables were filled by the time I got to the Cornelia Street Cafe.

If you’ve never been, the cafe has a secret basement. To get in you must descend a narrow stairway and then push through an oversized velvet curtain. Once in, there’s just enough space to fit a tiny bar, some small tables and at the far end, a stage. Tea candles provided the only light in the room, except for the stage. A bright spotlight illuminated each of them one by one as they stepped out of the darkness. Another lush, velvet curtain hung behind them, covering the entire wall, 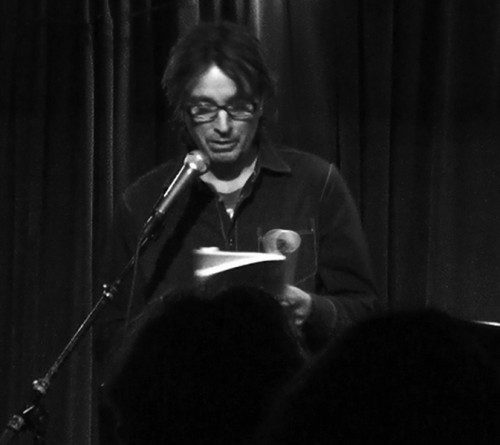 As I located my seat, Rumpus founder and editor Stephen Elliott stood and gave effusive introductions for each of the poets. He read one or two poems himself and seemed very happy.

Needless to say, the tone of a reading is just as important as everything else and this one had all the right elements.

David Roderick was the first to read. He, like Elliott, had been a Stegner fellow at Stanford.  Then Nick Flynn followed him (author of the notorious novel Another Bullshit Night in Suck City), and finally Beth Bachmann, who is a poet that teaches at Vanderbilt University.

Interestingly, the cover charge was only eight dollars, which included one free drink (house red or white, or a beer of your choice). I chose a beer – one that normally costs seven dollars. As I sipped it, I wondered how in the world they could make money on poetry readings. Then I remembered that it’s really the first drink, that gets you.

Anyway, once the show started the whole thing lasted only about 45 minutes. That’s with Elliott’s introductions and everyone reading. Just 45 minutes. Not too long, not too short. Real professional. It was just long enough to get you hungry for more — or make you wonder what Nick Flynn meant in his poem when he said “my neck was still cold from where she kissed it.”

As such, the poems flew by with almost no time to linger. Bachmann was the best at slowing things down, because her reading style is to read One. Word. At. A. Time. But it works, making for a nice cadence and her world-weary personality came through. She put so much emotion into every word it was unclear where she was leading the audience, until suddenly the poem was out of her. I felt I had been taken on a wild emotional journey and then wasn’t sure where I was. She wore a great big red bow in her hair. 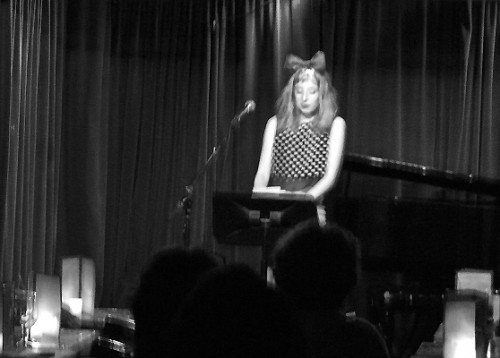 Beth Bachmann at the Cornelia Cafe with a big red bow in her hair, NY. photo: Chris Cobb

Then it was over.

That 45 minutes was surprisingly quick.

Just as the poets were finishing up their drinks, a wrinkled old man, looking like an actor playing the part of a jazz club owner, came out and gently encouraged us all to quickly exit the place. People needed to leave RIGHT NOW because  a jazz band was on next.

When the lights came up and people chatted with each other I noticed how none of the poets was wearing an unnecessarily long scarf or too much mascara. This wasn’t the reading to wear high heels to either because the sheets of ice outside, like Manhattan’s social scenes, can be very unforgiving.

It was a great reading, an oasis of common sense on a winter night. Hopefully the Rumpus will keep showing New Yorkers how it’s done.