We met with Ingrid Rojas Contreras and Jeremiah Barber in the gallery of their current joint exhibition Lo real maravilloso at Mission Cultural Center to talk about their ongoing collaboration. Ingrid identifies primarily as a writer and Jeremiah as a visual artist; however, their connection and collaboration of more than a decade blurs boundaries between words and images.

unexpected projects is a collaboration between Jenny Salomon and Jen Stager. In this series, they interview other collaborative teams in the Bay Area to find out what their projects and processes are all about.

We met with Ingrid Rojas Contreras and Jeremiah Barber in the gallery of their current joint exhibition Lo real maravilloso at Mission Cultural Center to talk about their ongoing collaboration. Ingrid identifies primarily as a writer and Jeremiah as a visual artist; however, their connection and collaboration of more than a decade blurs boundaries between words and images. Lo real maravilloso is their first collaborative show. The exhibition includes both individual works by Ingrid and Jeremiah, as well as performances in which both appear, such as In Extremis (2008), in which one of the pair drags the body of the other back and forth through the sand of the the Nevada desert until fatigue dictates that they switch roles, and Other Half Orbit (2011) in which the pair face each other lying on their sides half-submerged in a pool of water and ask and respond to each other’s questions across the water.

unexpected projects (Jenny Salomon and Jen Stager): How do your joint performances come about?

Jeremiah Barber: Other Half Orbit, which opened at Southern Exposure (2011), was our first real collaboration. We started with a short piece of creative nonfiction written by Ingrid and expanded from there. Previously when we did In Extremis (2008), I was making performances and videos and I’d sometimes ask Ingrid to take part. 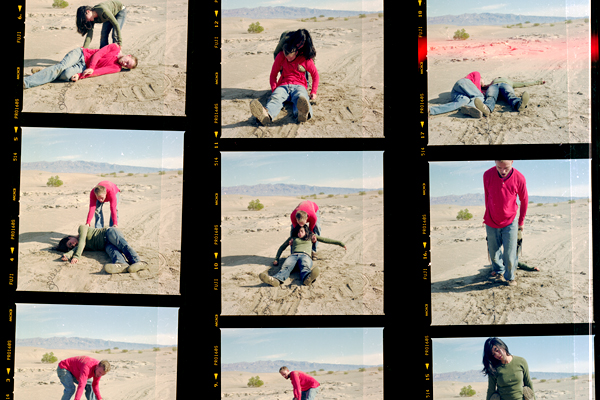 Ingrid Rojas Contreras: Our collaboration evolved from assisting in each other’s work. Since meeting Jeremiah years ago, I would go and document his work. I had to learn all different kinds of cameras. And even though I am not trained as a photographer, because I know him so well, I knew what he wanted.

JB: When I first started making performances, every single time I did a piece, I’d have an issue with documentation, because every photographer would have their own aesthetic, or would consider the photographs of a performance their own artwork. There were so many communication issues that were so hard to deal with. I started working with Ingrid because she understood what I wanted to do.

So by the time that we got to the desert video, Ingrid was behind the camera, and we just said, “Hey, why not do this thing together. Just step on this side of the camera.”

UP: Would you say that the breakdown of Lo Real Maravilloso is primarily the work of two individuals, joined by several of your collaborative pieces?

IRC: Sometimes in our collaboration, even when it’s not apparent, there is still a circular conversation that is happening, because we are so involved in each other’s work and we are both really interested in metaphor. Coming from opposite fields, it is interesting to see what that common language is.

Jeremiah had these beautiful early drawings that he was doing with text, and I really like those, so in a way they inspired me to experiment with drawings in relation to my writing.

UP: Does the dynamic you have when you are working together feed into the dynamic in your personal life?

JB: It is kind of the other way around, at least for me. The reason we started making these early pieces together is because we moved here together from Chicago. We packed all our stuff in the moving truck and camped the whole way and there were long days when we had less verbal communication. We would stop at a campsite and take care of all the aspects of everything you need in a day — shelter, food, setting everything up–without discussing it. It was the first time I really started examining our relationship personally. I felt like the work thing came out of the life thing.

IRC: One of the things that has influenced me the most in working with Jeremiah is that it has made me see the potential in story telling that is not on the page. It is so different, the story can take so many different shapes. It became apparent to me with Lo Real Maravilloso that we could have all these lateral stories and actions as part of it. I love the way that works. I was excited to be able to visually split parts of the story. 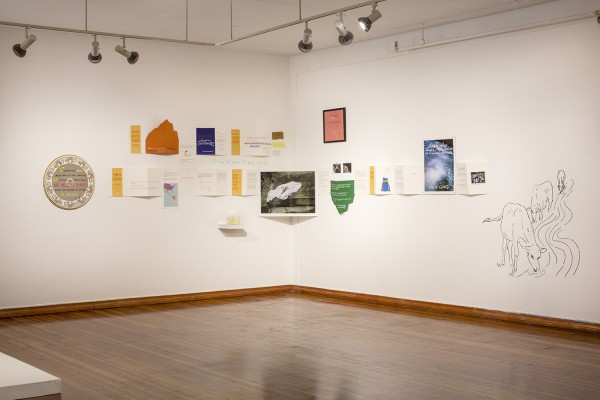 The Man Who Could Move Clouds

UP: Since working together, have you found that collaboration has affected your individual practices?

JB: Since working with Ingrid on Other Half Orbit, I realized that all of the problems I tend to focus on are visual problems; how the viewer relates to visual aspects of the piece. As soon as Ingrid started working with me on it, she started talking about the narrative of the piece and these questions of story that I don’t really think about. She has such a thorough knowledge of what makes a good story. That has led me to really think about the narrative behind the act of making an object or a performance.

When I started making Lapses (2014, pictured below) I was thinking about old, disused tools, and really just choosing objects based on my random attraction to them. At some point I realized that there was another narrative that is part of Ingrid’s practice, that objects carry some kind of energy with them. Definitely working with Ingrid has changed the way that I think about the stories of objects. 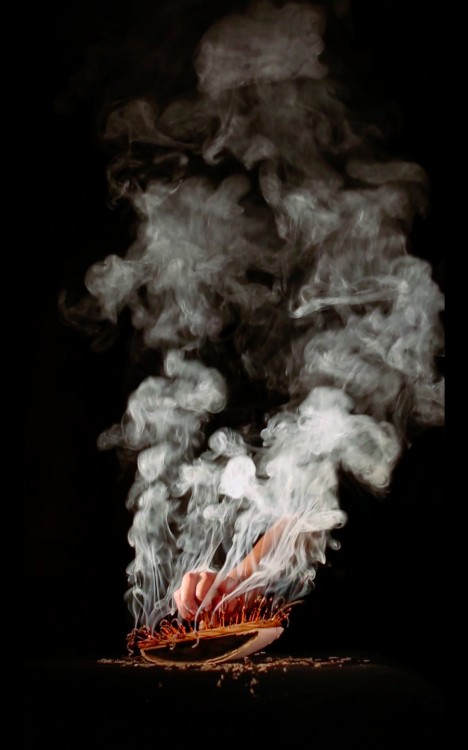 IRC: We also have almost opposite processes. I always like to start when the concept is already there and then go from the concept. Jeremiah prefers to have a variety of objects around him and he knows what qualities he values in them. He will play with the objects and images and not really tack down the meaning. Working with Jeremiah — I like to have the meaning nailed down and he is the opposite — has really helped me to grow in the opposite direction, where I have to be ok with exploring what it’s like to not tack down meaning immediately.

IRC: It is pretty informal and we bring ideas to each other. I tell Jeremiah “You should do this,” and make him little drawings and explain what they mean. Or I’ll think of an interesting action and I’ll bring it to Jeremiah and I’ll say, “Here you go, think about it.” We’ve found that it is hard to talk it out in that first moment. I want to make something about this specific situation, so I’ll tell Jeremiah and we’d think about it separately. Then when Jeremiah is ready he’ll say “By the way I thought about it and I made some drawings.”

JB: We also just have different times and spaces in which we are creative. That makes it hard. Ingrid will be walking in the city and that’s when she gets an idea and she’s like, “This is my idea, let’s talk about this right now! Let’s make this a performance!” and I’m like, “I can’t think while I’m walking. It’s just not happening!”

UP: When do you think, Jeremiah?

IRC: So we are constantly waiting for each other. If he brings me a drawing, I might say I need to walk! 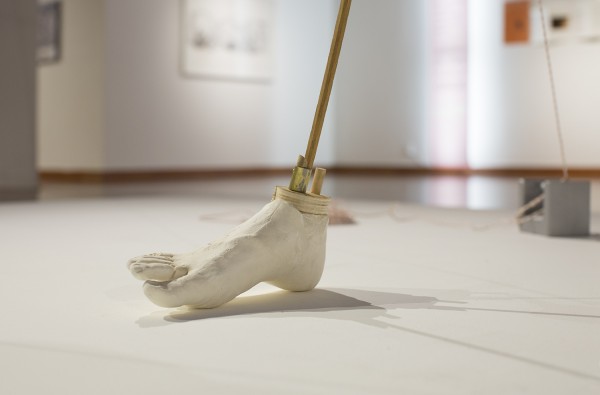 We rounded out our conversation in the gallery housing Other Half Orbit. The subtitle sums up the premise of the ninety minute live performance: in a pool of water we discuss distance and memory loss in our ten year relationship. Ingrid and Jeremiah lie facing each other in a pool of water, with half of their body from head to foot submerged in the pool. Ingrid recounts the story of an accident in which she was knocked from her bicycle and suffered memory loss in the immediate aftermath and in ongoing episodes. They ask each other stark questions across the water as their individual bodies shiver with cold. “Do you think,” stutters out Jeremiah around his chattering teeth “that some part of you got in an accident on purpose in order to escape getting married?”

In a lot of ways this piece sums up their collaboration style — Ingrid wrote the underlying narrative frame; each prepared their stark questions individually, and Jeremiah brought in a surprise series of palindromes in his pocket that he pulled out when the scene demanded a moment of levity, read it off, and sent the small paper floating across the water. Jeremiah talked about seeing his own breath move the water in ripples between his body and Ingrid’s as they talked. Ingrid spoke about losing track of the audience as they focused on each other’s eyes and words, shivering in the dyed-black water. They spoke of separate experiences and separate bodies, but also of a whole life together. Lo real maravilloso shares the films’ qualities of separate moments fit together. Their individual works make up the majority of the show, but their moments of explicit collaboration reveal  how much of each other feeds back into their individual practices.  Maybe that is one important aspect of collaboration — as individuals, collaborators choose to embark on a project or a life with each other. That balance of separate and together is part of what makes it work.

Ingrid and Jeremiah stand in front of the video projection of their prone, shaking forms. Their voices from the film, talking back and forth to each other, mingle with their voices in conversation with us. As we try to line up a shot of the pair in front of the images of themselves, Ingrid relaxes easily against the wall, while Jeremiah seems, in this rare moment, unsure of what to do with his body. “Ingrid has it better!” we call out. As he adjusts his feet on the floor, Jeremiah grins and responds, “Ingrid always has it better!” 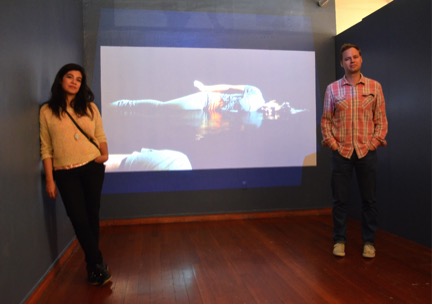 Ingrid and Jeremiah with Other Half Orbit 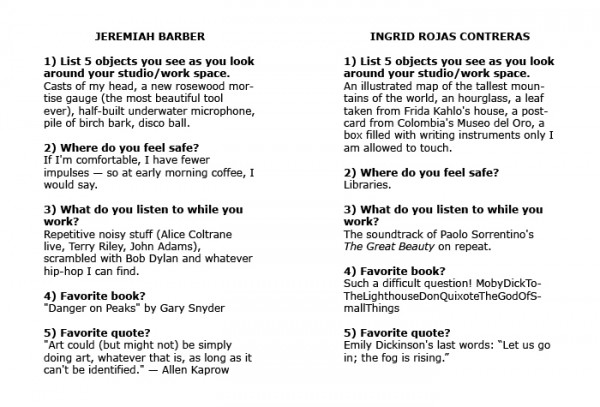