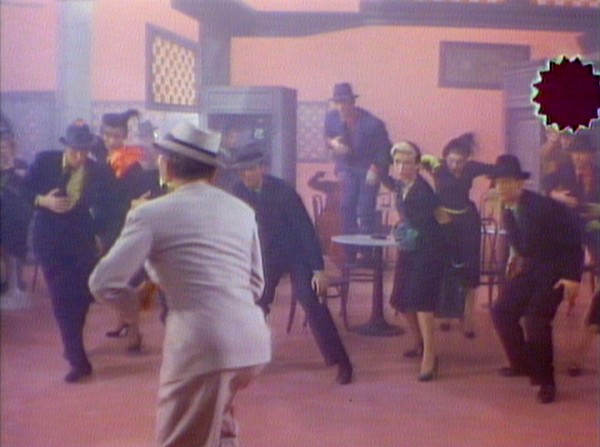 “Cigarette burn” in frame from The Bandwagon (Vincente Minnelli, 1953) 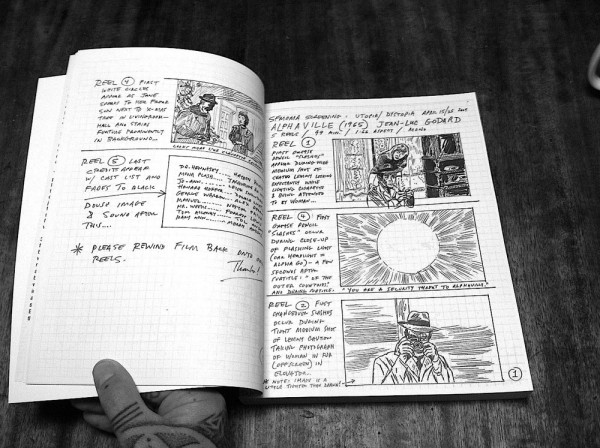 The tiny 35mm film frame (twenty-four pass by per second), in its singularity, evokes all of the big screen’s satisfying fullness. No small screen (say, television or computer) can hope to equal this lovely, fractal facet of cinema. I mused upon this while reading Paul Clipson’s REEL, a disarming work of almost pure obsession.

Accident and intuition figure prominently in Clipson’s repertoire as an experimental filmmaker. It’s safe to say that a rather different side of him comes out in REEL, published by Land and Sea fine art editions. The book collects Clipson’s illustrated projectionist’s notes on some 135 films that passed through his fingers during his fourteen years working as an A-V technician and film projectionist at SFMOMA. And Paul admits, “I would describe my expertise as a film projectionist to be based on acute levels of worry, paranoia, and fear.”

Part of a projectionist’s job is to prepare and inspect the films prior to showtime and make a condition report; in the process, he or she will locate and become familiar with the cue marks before the end of each reel. You’ve seen these marks, even if (as intended) you don’t know it: the white-circled, black-centered blips, also known as “cigarette burns,” in the upper right corner of the screen that the film lab inserts in an exhibition print to alert the projectionist that a changeover to the next reel, ready on a second projector, is imminent. Within seconds. If the projectionist were to miss the cue, it wouldn’t be a pretty picture. 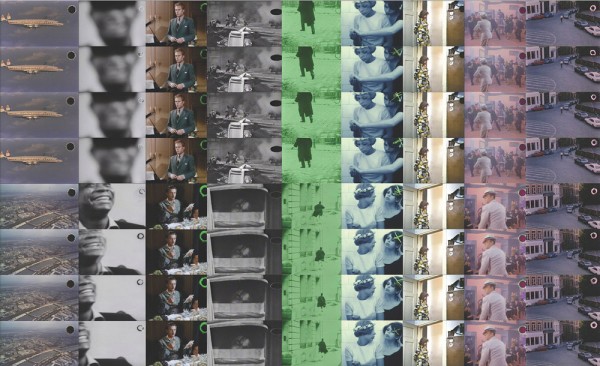 Paul Clipson, book jacket for artist edition of REEL. Look for the “cigarette burn” in each film frame. [Click for larger view] 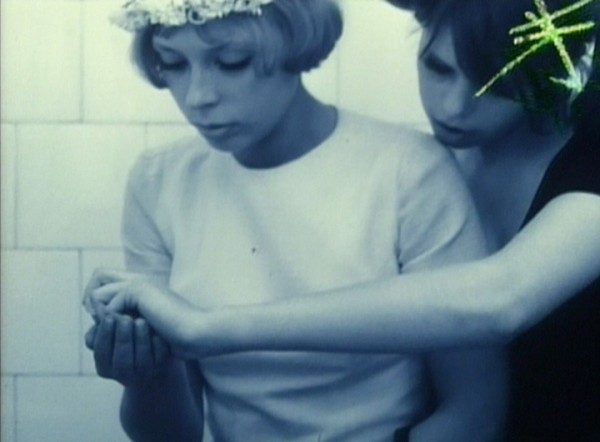 Given SFMOMA’s sporadic film schedule, with staffing to match, often Paul found himself prepping films for an on-call projectionist whose path he might not even cross — and who certainly had not examined this print of this film. How would he or she handle the changeovers?

Some 35mm film projectors have warning bells. SFMOMA has Paul Clipson — worried, paranoid, and fearful. And an artist. For every reel of the film in question, Paul scrupulously described where the first set of changeover cues would appear. And he not only described, he sketched a complete picture of the frame.

Let’s review the setting: He’s at work. He’s inspecting and prepping films for projection and jotting detailed notes to the projectionist. He’s alone with the film, every frame of it. At reel’s end, he takes out his photographer’s loop for magnification, his pad and pencil, and sketches what he sees. What he sees.

For me REEL holds the pleasure not only of recognition, but of transformation, in this case from the medium of a film frame conceived and shot by one person into a drawing made by another. Despite their workaday purpose, Clipson’s notes and sketches are infused with movie love. 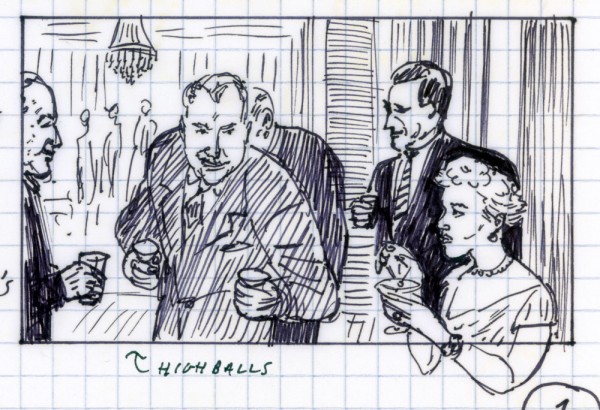 Paul Clipson, drawing for All That Heaven Allows (Douglas Sirk, 1955), reel 3, in REEL

At All That Heaven Allows, reel 3, for example, Paul notes: “First white circles appear during wide medium shot of a group of the local waxworks gossiping at Agnes’s party…” (That would be Agnes Moorehead, who plays Jane Wyman’s friend in this Douglas Sirk melodrama.) Notice how, under his perceptive sketch of a split-second of aggression in a foregrounded partygoer, Paul helpfully points to the “highballs” in the suburbanites’ hands.

In reel 4 of the film: “First white circles appear as Jane speaks to her freak son next to Xmas tree in living room — hall and stairs feature prominently in background.” (You can see this sketch opposite Alphaville in the spread at the top of this post.) Paul allows as how his drawing of Jane Wyman “looks more like Claudette Colbert,” but anyone who knows the film would instantly recognize this as a signature Sirk moment: Christmas tree, hall, stairs, ill-meaning children… All that’s missing is the new television set, which, in 1955, is meant to divert Jane from her libidinal intentions toward her tree trimmer, Rock Hudson. But Clipson plays by the rules: no white circles, no TV. 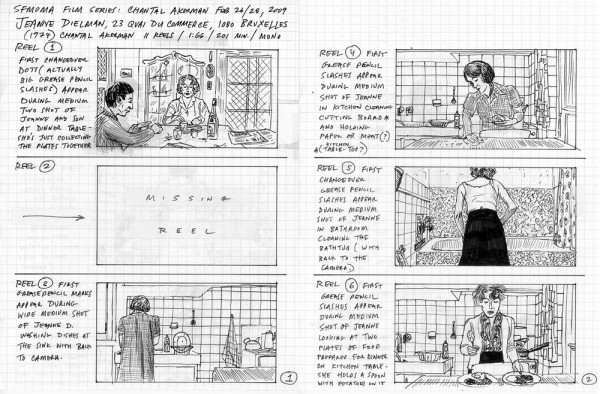 Clipson’s sketch alone can tell the deep story, the more so if you’re in there with him: Chantal Akerman’s Jeanne Dielman (Delphine Seyrig) is unmistakable, implacable in her plaid housecoat, her back turned to us in her kitchen. The wallpaper, the potatoes, the son, the— missing second reel! Oh no. But Clipson’s verbal dispatches to his mystery projectionist can be sketchily profound as well, and I found myself hoping they were received in kind. For Derek Jarman’s Caravaggio, reel 2, under the penciled close-up of the artist (Nigel Terry) “looking upwards with fatigue,” Paul points to tear-like drops and asks, “paint or blood?” 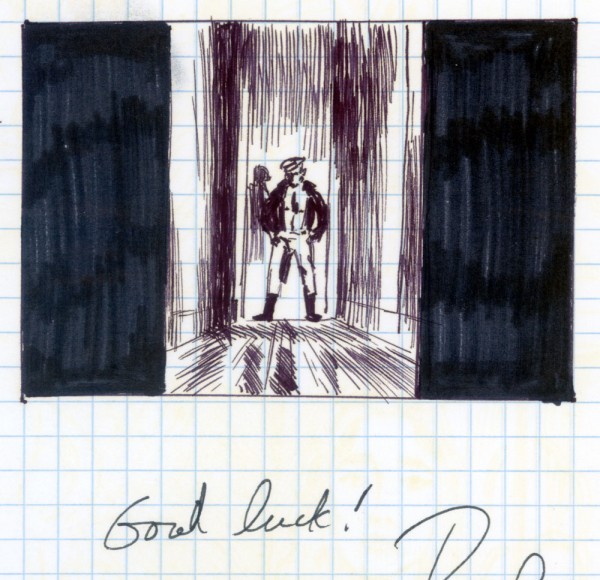 Paul Clipson, “Biker dude standing in the far distance of a shadowy hallway…,” in REEL

In fact, aspiring film nerds might play a game with this book: guess the title, extra points if you guess the reel number.

[B] “Fred stands in an interior long shot, holding his hat in hand and looking forlorn, misbegotten, or just lost… or maybe he’s just about to walk out the door… (moment of tension).”

[C] “Beautiful long shot of tunnel interior… Not much else to note, except that the look of filth & pollution in this tunnel is frighteningly real!”

Paul sees the book, organized alphabetically by film title, as a kind of exquisite corpse, and to the extent that each entry in the Surrealists’ game has a startling revelatory quality by virtue of random juxtaposition, we’re back to accident fueling intuition. REEL fits precisely into its author’s body of film and other artwork.

The aptly surnamed Clipson is fascinated by the very fact, history, and future of the “cigarette burns” on 35mm film, particularly as they are a fast-disappearing anomaly in the age of digital cinema. To that end he has put together and exhibited a twenty-minute DVD of found video clips in which the original film’s white circles appear, drawing from titles in the book. Almost by definition many of the video clips are old and grainy or blurry. But in this exquisite corpse you might find a clue to the mystery of a magical medium: what the ends of movie reels can tell us.

Quiz answers: [A] Scorpio Rising, reel 1 of only 2. [B] No! Not feckless Fred MacMurray in There’s Always Tomorrow. It’s Swing Time, reel 2. [C] Stalker, reel 5. [D] Okay, that was a giveaway: Invasion of the Body Snatchers, reel 3.

Judy Bloch is managing editor in the SFMOMA Publications Department. She wrote for the Pacific Film Archive for many years and is still happiest when the lights go down and the film comes up — in 35mm.

Paul Clipson often collaborates with sound artists on films, live performances, and installations. He’s presenting the U.S. premiere of HYPNOSIS DISPLAY with Grouper at TBA in Portland on September 20 and is in the group show In Waves at Jack Hanley Gallery in New York though October 5. Find him at http://www.withinmirrors.org/