Taking Up Room On The Floor 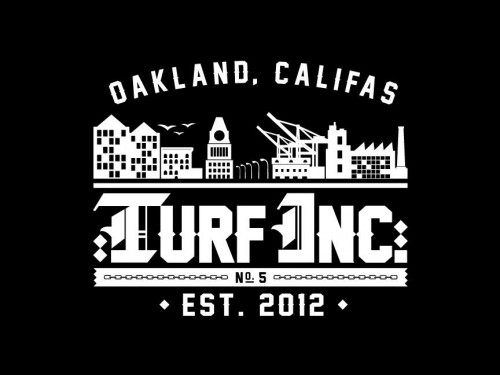 The RIP videos made by Oakland turf dancing crew Turf Feinz appeared in 2009-2010, commemorating recent deaths of young people in Oakland. It’s been four years or more since most of them were posted, which in turfing time, like internet time, might as well be forty. However, many, if not all, of the dancers in those videos are still dancing in Oakland, still making videos and pursuing their art. They can be seen dancing in a wide array of venues around the Bay Area—from collaborations with the Oakland Ballet, to the many battles promoted by TURFinc to late night BART trains between West Oakland and Lake Merritt.

I interviewed TURFinc founder and Turf Feinz dancer Johnny Lopez this summer over G-chat. I had long admired Lopez’s work as a dancer and tremendously charismatic host of turf dancing battles I’d attended.  I asked him about the many styles of dance that influence turfing. “We started as a hyphy storytelling footwork house party dance style and year by year we incorporated every dance style you can think of,” he said. When I asked him to say more about “storytelling footwork,” he said, “Turfin is more than a dance style, it’s a way of life for us and most kidz that experience being in ghettohood in Oakland. So the way you can tell a real turf dancer is by the way they dress, sometimes their music selection, the way they glide, swag, their story, and you can see their struggle while they’re dancing. You can tell by their face.”

I went to an event last summer, a competitive tournament for dancers, at the Firehouse in Berkeley, hosted by Lopez. It was a beautiful day, and a packed house. Poets in Oakland are always making jokes about “poet time,” events with an 8:00 start time that don’t commence until 10—but poets have nothing on turfers for lateness. This special sense of time, though, is critical. Not only are the minutes and hours leading up to the commencement of the battles important opportunities to socialize, network, teach and learn, being “out of sync” is an integral part of turfing itself. Not that the dance is ever exactly separate from the beat. But the best turfers innovate idiosyncratic measures and relate to the beat not as a determining influence but an available, optional accompaniment.

Turf battles are generally comprised of two dancers, each of whom dance two sets. After a coin toss, the winner decides whether he or she wants to dance first or second. Dancers frequently bring their own music. When they finish, a panel of judges decides on a winner. The dancers shake hands, underscoring the contagious spirit of camaraderie—even among opponents—that characterizes these battles. The atmosphere at the Firehouse that day was festive but also familial. Every age group was represented, from infants to seniors, but the median age appeared to be about 19. All of the dancers were male (that day—but there are signs that the genre is finally diversifying are appearing.)

At a break, I went out to the backyard and waited in a long bathroom line. Dancers congregated outside, talking in clusters. The aroma of freshly torched cheeba rose and spread skunky fingers over the ensemble. The wait really was long and I eavesdropped on some of the conversations. Two dancers who had already performed were doing a postgame. One rolled a stupendously beautiful blunt. They were discussing in particular the “story” that one of the dancers had tried to tell in his dance.

That’s what I had in mind when the second half of the show started—story. Pantomime and narrative are two of turfing’s distinguishing strategies. The first battle I saw after the break paired Shinobi and X-Ray, which the video above depicts. X-Ray, representing the B.A. dancing crew, goes first. He looks terrific—a homemade B.A. chain on his neck and an enviable floral bucket hat. In his first solo, the hat is dispensed with swiftly. He starts by accentuating his barreled torso with some provocative and slippery wiggles, but his dance is also dexterous and graceful. At one point, he taunts Shinobi, mimicking the kick Ralph Macchio dispatches Johnny with in The Karate Kid…and then does the splits.

After a meditative, acrobatic, martial-arts inspired set by Shinobi, it’s X-Ray’s turn again. Shinobi sulks off to the corner of the stage with his back turned. X-Ray prowls around the stage, reminiscent of turfing’s supposed etymology (“turf-ing” supposedly stands for Taking Up Room on the Floor). His dance this time is tentative, exploratory, modest. He repeats the belly caressing and takes a few dozen seconds iterating contorted expressive handwork. There’s a kind of dialogue with X-Ray’s hands and that outstanding hat. And then the finale.

Pulling his shirt up, he licks his fingers and pretends to massage his right nipple, looking coyly over at Shinobi, smiling. Shinobi has started to pay attention. After the come-on, and after a couple of minutes of ornate but modest movements, X-Ray bounces across the whole stage, shoving his shoulders up, suddenly in sync with the beat. There’s an immediate sense of relieved tension–a tension X-Ray cultivated without flaunting the process of its production.  Everybody erupts. Even Shinobi can’t resist the power of this move in this moment. At turf battles, competition is the structure but solidarity is the rule.

The relationship to the beat is one of the ways in which turf dancing emphasizes an aesthetic of being slightly off, slightly weird, tangentially “dumb” in the specific meaning that term has in Oakland. As the dance moves through different levels of intensity and attention, the beat becomes, if not subordinated, at least temporarily subdued, as dancers glide hats around their elbows and construct elaborately expressive facial gestures. X-Ray’s two sets create a new model of time and rhythm—his final move is a glimpse into the ordinary time where we all began, where one’s body moves in time with the beat.

And maybe this is part of the story X-Ray was telling—I can’t say with certainty. Because turf dances are a combination of body movement and storytelling, the attempt to read the foot and handwork is always a matter of interpretation. And not every gesture is allegorical for something else—part of the story will always be the body in the moment of the dance. Between footwork and story, the narrator is in the present, creating and abiding in the special time of turfing—a time we both instantly access as witnesses, and yet wonder at.