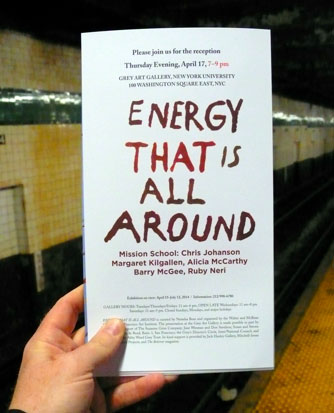 Finally, after endless meetings, conversations, editorial decisions, and possibly a little nail-biting, the newest incarnation of curator Natasha Boas’s Energy That Is All Around has arrived in New York City. It opens April 17 at New York University’s Grey Art Gallery right across the street from Washington Square Park.

It’s worth mentioning that the park itself is somewhat of a magical and mysterious place. Diane Arbus made some of her most famous photographs there. In the 1940s Marcel Duchamp did an undocumented performance inside its famous archway. Both Bob Dylan and Buddy Holly played there. As long as anyone can remember it’s always been a place where friends and lovers met and where artists felt free to hang out.

The park’s open design lets you enter in and then leave from any direction. Rows of manicured hedges compliment the statues and on most days there’s just the faintest smell of weed in the air. On any given afternoon you can see people playing chess, doing yoga, or just horsing around. If you’ve never been there, it’s hard to explain, but the park has an ambiance of possibility, and acts as an oasis of harmony in this crazy city.

Likewise, in Energy That Is All Around, there is a cultivated sense of play and an emphasis on openness and collaboration — maybe even of family. It’s a nostalgic look back at the 1990s, which is now being viewed as a special time in Bay Area art. It was when community and collective efforts actually mattered — before the average rent was $3,200 and protesters were physically attacking Google Buses.

Back then it was hip to do graffiti and random works in Mission spots like Clarion Alley or “illegal” places — like constructions sites — where they didn’t have permission. It could be reasoned that their fast, sparse style is a byproduct of that paint-and-run aesthetic. When you are doing street art you need to get in and out fast so you don’t get caught.

New Yorkers will probably observe that this work is not the kind one would expect from a Yale grad or a Columbia MFA (the sort that fuel the New York art scene). Instead, it is more rooted in the casualness of Northern California and as such there are connections to older movements such as Funk art. In fact, one of the things the Mission School has in common with Funk is that most of the artists toiled away in obscurity for a very long time before they found a broader audience. There is also an obsession with recycling materials and using whatever is at hand to make art with. Humor, too is a vital trait, one that distinguishes the regional art of Northern California and popularized by artists like Joan Brown, Bruce Connor, William T. Wiley, Richard Shaw and Bob Arneson.

Works in the exhibition are by Ruby Neri (daughter of sculptor Manuel Neri), Barry McGee, Alicia McCarthy, Chris Johanson, and Margaret Kilgallen. The gallery is full of paintings, drawings, prints, photographs, sculptures, letters, and other various things that help tell the story of the group.

In conjunction with the exhibition there will be a high-powered art world talk called Coastings: Street Vernaculars in New York City and San Francisco. Panel discussion moderated by Carlo McCormick, Senior Editor, Paper magazine, with Natasha Boas; Martha Cooper, photographer; Sean Corcoran, Curator of Prints and Photographs, Museum of the City of New York; Jeffrey Deitch, Deitch Projects; and Carlos Mare, sculptor. That happens on May 7. Mark your calendar if you happen in to be in New York.