On the Contemporary: Instant Nostalgia, by Francesca Lisette

This fall, Open Space has featured a series of reflections by artists, writers, and curators on “the contemporary.” Today’s piece is by British poet Francesca Lisette, who currently lives in London.

A couple of months ago I was in California with a friend. As we took pictures of each other in the park, he joked about the fact that they were already on Facebook, being “liked” by our mutual friends. These photographs became instant souvenirs, displacing us from the moment we were in, accelerating us to a time when we would already be remembering our happiness. That didn’t change how happy I was then, but it added an extra poignance to looking at the photographs of my trip afterward. Images are confirmation that IT REALLY HAPPENED. Instagram does this too, of course. I admit to being particularly prone to measuring the excitement of my life by how recently I’ve selected an artificial colour and frame for some momentary event. Facebook enables the immediate sharing of the impulse to memorialize in a way that is unprecedented in our culture. As such, it is a factory of nostalgia. 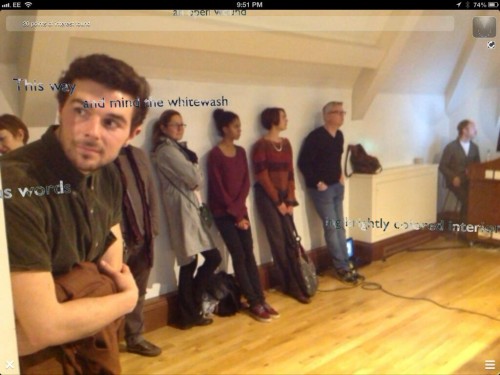 Still from The Operature, courtesy of the artists

I noticed a similar phenomenon whilst watching a multi-platform performance piece entitled The Operature, by ATOM-R, or, to give them their full title, Anatomical Theatres of Mixed Reality. The Anatomical Theatre includes tables that slot together and four male performers who dance, move, and interact with one another’s bodies and speak fragments of text from a constantly morphing, touch-sensitive device, which is simultaneously projected on large screens. Judd Morrissey, the impresario of the text work, moves around the fringes of the piece, apparently photographing not only the performers but the whole room, including the audience. Within minutes of a photograph being taken, the image is projected onto the screen alongside those fragments of text. Morrissey has subsequently informed me that these images are actually captures of geo-spatial texts triggered at will, which populate the real-time image picked up by the camera with virtual fragments of language. Not only is the audience, a strictly non-diegetic element of the piece, incorporated into its world, blurring the edges between performance and reality, but language is also embodied and given agency, if only in the form of a holographic presence. [The fourth wall was further disrupted by a fire alarm that went off one minute before the end of the performance, as performers and audience struggled to find a way out of the building together: it was the most fabulously surreal end to any piece of theatre I’ve ever witnessed!] However, it’s important that the image is not quite instantaneous: Morrissey does not film the audience and stream it back to us live. There is a disconnect, a time delay, distancing us from the moment that just took place (as with live Instagramming/Facebooking/ tweeting) and highlighting the restlessness of the present moment.

For me, The Operature proposed a new way of depicting the power relations of knowledge and emotion, sex and meaning. One of the key sources for ATOM-R’s performances is Samuel Steward’s STUD FILE. Steward was a literary critic, novelist, tattoo artist, sexual pioneer, and friend of Gertrude Stein, who cataloged his every sexual encounter in the pages of his brilliantly named “stud file,” including appearance, size of penis, and any individual quirks. Halfway through ATOM-R’s performance, each performer lay down and revealed a tattoo, which the audience was invited to scan with their smartphones (we had already been advised to download an app for this part of the performance). Once a tattoo had been scanned scanned, the app recognised the shape of the image and produced extra content — perhaps a gif of multiple heads swarming, or a video clip from Kenneth Anger’s Fireworks, or the triggering a geo-spatial text.

There are at least two ways of thinking about this, and both may be true. One is that the device acts as a deflection from the actual human body below it, suggesting that the confrontational strategies of performance artists in the sixties and seventies have been trumped by technology. The other: that the human body is a mine of data and information, that sexual encounters (which the action of reading the tattoos may be a cipher for) provide a unique opportunity to explore. The Operature, finally, opens on to deeper dimensions of human experience, and it was refreshing to see this expressed without attachment to a narrative or emotional outcome (as I suspect Samuel’s liaisons largely were). What “happens” in performance art? Specifically, to what extent is “what takes place” an action of the performer’s will, or an act of surrender?  Is participating in the production of nostalgia, even in the common form of the photograph, in itself a performative act? 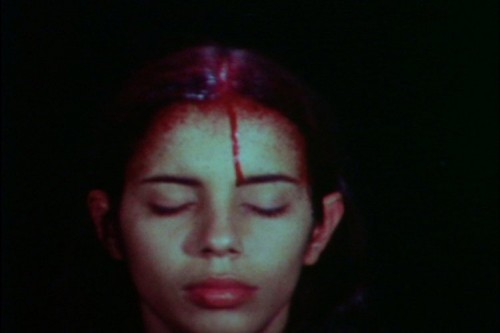 Ana Mendieta’s first UK retrospective is currently at the Hayward Gallery, under the title Traces. The title is apt: most of the works in the exhibition consist of documentation through photographs, films and slides of site-specific performances or events that only happened once, or else were subsequently eroded by nature. Traces features re-creation of the order and style in which some of the photographs were first exhibited, with certain photographs displayed unframed.  I found this fetishization of the archive jarring, especially when applied to Mendieta, whose work is so deliberately outside of human concepts of time and beyond the confines of the gallery space. The photographs Mendieta chose to print in her lifetime are referred to as “lifetime” prints, emphasising the act of selection pivotal to the creation of her aesthetic.

This summer I took a workshop with two performance artists. One of the artists said that he hated reenactment, an increasing trend in contemporary performance art. He said that he found it “disgusting, horrible; why would you do that”? I thought of this when investigating artists who had been inspired by Mendieta’s work. The artist Tania Bruguera re-created Ana Mendieta’s works in Cuba. This was a sustained project begun in the year after Mendieta’s death and lasting over a decade, in opposition to official government policy, which aimed to erase the contributions of Cuban expatriates such as Mendieta. Bruguera’s project of reenactment is undeniably worthy and beautiful, an act of memorial and re-homing for an artist afflicted by nostalgia for her homeland for most of her life. After completing the work, Bruguera destroyed all vestiges of it; only a few photographs remain.

Perhaps what I find so uncomfortable about the archive (and about the instant memorialization enabled by Facebook) is the same as what the performance artist hated about reenactment. After all, I love the contents of the archive — I delight in being able to see Mendieta’s work as she originally presented it, or what my friends are doing in the immediate past — even as I fear displacement from the present moment and participating — even colluding — in net surveillance culture. Perhaps the fear of reenactment has to do with reanimation, a zombification of culture, nostalgic reproduction as substitute for originality. Perhaps, too, my friend and I are suspicious of an archival turn within the art academy that also functions as yet another displacement from contemporaneity.

I leave aside the whole issue of the very contemporary art that incorporates the Internet, with its internal use of msg speak, gifs, and hashtags as a shorthand for youth culture, enfranchised by the net. I think this art is absolutely “of the moment” and productively, deliberately grotesque, in that by mimicking the net’s disconnect from the body and thus “presence,” it thrives on that uniquely contemporary emotion: nostalgia for the future. Instant memorialization puts us in a permanent state of loss, displacement, and hunger, which refreshing the Facebook feed can’t and won’t satiate.

But nostalgia is a wound that speaks, as in the art of Ana Mendieta. We cannot say, with the Situationists, “no more images,” for they may function as souvenirs of the infinite possibility sensed in the moment of full being, full happiness; a promise of continuity. This is what those mysterious electronic tattoos in The Operature exemplify so uniquely. Not merely memory, or knowledge, but actual experience. Not reanimation, but the possibility of reactivation — hidden in images, those capsules of dormant time.

Francesca Lisette (b. 1987) is a poet, performer, and writer, currently based in London.  She studied literature at the University of Sussex, from which she holds an MA in Critical Theory. Her book Teens (2012) is available from Mountain Press; new work is forthcoming from Veer Books.