For the first time in the history of SFMOMA’s biennial award program honoring Bay Area artists, the museum has commissioned the four recipients of the 2012 SECA Art Award to create work outside the traditional gallery context. Their site-responsive projects are at several locations throughout the Bay Area. To complement these projects, Open Space has commissioned a piece of writing on each of the four locations. Today, Allison Arieff on 151 Third Street, where artist Jonn Herschend’s work was filmed. 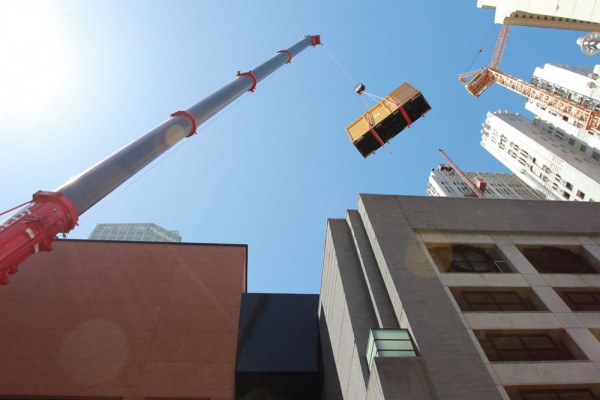 A Michelin-starred restaurant. A five-star hotel. Disneyland. In all of these places, what goes on in the “back of the house” is essential yet invisible. It’s the same with the art museum. We enter eager to be embraced by the aura of the work of art. We don’t care to know the particulars of what might be going on beyond the walls of the white cube.

But Jonn Herschend does. In Stories from the Evacuation he is interested in precisely that which is hidden from our experience as museum visitors. Though fascinated by the art, of course, he is equally intrigued by what we never really see and wants to show it all.

There are banal break rooms. Sculptures are swaddled in Saran Wrap for storage. Paintings are damaged and repaired. There are messy file cabinets. Catfights. And tightly wound corporate consultants.

In conceptualizing his artwork, Herschend was less interested in the San Francisco Museum of Modern Art or 151 Third Street as a location than he was in an idea of the location. Hence his decision to make the exhibition site of his SECA exploration a virtual one — the SFMOMA website. Absent its building, SFMOMA currently exists online, like Jonn’s piece does. Or, perhaps more accurately, SFMOMA currently exists as a million individual perceptions by its former and future visitors.

There’s the reality of “behind the scenes,” Herschend told me, and then there’s “the mythology of this beautiful, quiet, contemplative place that has art that I’ve read about, seen pictures of, and get to see in real life.”

But what happens to the aura of the work of art when that work lives not on the wall of the museum but in the virtual realm?

The other day, a friend who knows better questioned the relevance of museums now that so many works of art are to be found online. “Really?” I countered. “How can you compare viewing a painting or sculpture in the flesh to seeing it on your computer screen?” The latter is information; the former is experience, context, memory. One is struck — or at least I was struck — when watching Herschend’s video from the beginning how we bring our own personal narratives to the museum with us. Our experiences with art are multilayered, unique. We may be attracted to a painting because it reminds us of a vacation, a parent, a book, or even an advertisement or a procession of banners lining Nineteenth Avenue.

The “site,” then, of Stories is not SFMOMA but rather a museum of memory. As Herschend explains (referencing Haruki Murakami), “We’re all fiction and we’re creating our narratives as we go along.”

The “San Francisco Museum of Modern Art” is in flux. It’s a place of anticipation, of experiences waiting to be had, future stories to be told. But it’s also mourning what it’s lost. As represented in Herschend’s Stories, it wears its agony, its resistance to change, on its sleeve — much like the film’s red notebook–wielding protagonist. In its transitional state, the site is now like the library described by Murakami in Kafka on the Shore: “inside our heads — at least that’s where I imagine it — there’s a little room where we store those memories. A room like the stacks in this library. And to understand the workings of our own heart we have to keep on making new reference cards. We have to dust things off every once in awhile, let in fresh air, change the water in the flower vases. In other words, you’ll live forever in your own private library.”

Allison Arieff is content strategist for the urban planning and policy think tank SPUR, and writes about design and architecture for the New York Times. Follow the SECA 2012 series here. More about Jonn Herschend is here. See Jonn Herschend and the other SECA artists November 13 – November 17 as they talk with Michelle Tea at SFJAZZ. Herschend will also be screening Stories from the Evacuation along with Alex Karpovsky’s Red Flag at the Roxie. Learn more at sfmoma.org/liveprojects.