For the first time in the history of SFMOMA’s biennial award program honoring Bay Area artists, the museum has commissioned the four recipients of the 2012 SECA Art Award to create work outside the traditional gallery context. Their site-responsive projects are at several locations throughout the Bay Area. To complement these projects, Open Space has commissioned a piece of writing on each of the four locations. Today, poet and novelist Robert Glück on the Neptune Society Columbarium, where artist Josh Faught′s work appears. 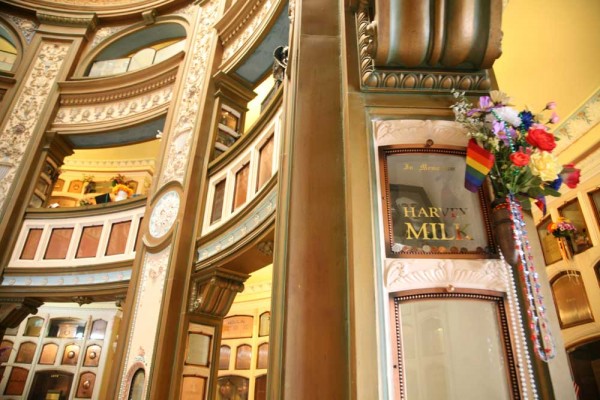 This chapter is excerpted from the in-process About Ed, a novel and also my version of an AIDS memoir: Edward Aulerich-Sugai was an Asian American artist central to my life — we were lovers during our twenties in the seventies. The novel explores class, love, the approach of death, mourning, and, of course, sex. I want to build Ed’s tomb, but that is the kind of undertaking in which issues of truth and respect come forward. I mean tomb in the sense of tombeau, a musical form in the sixteenth century, a poetic form in the nineteenth and twentieth, “Le Tombeau de Charles Baudelaire.” So Ed’s tomb is to be a public monument. Problems of truth telling are more pressing here than in the erotic and romantic stories I have written. — Robert Glück

Ed is thinking about buying a niche at the Columbarium to house his ashes. I drive him out on a bright blue and white day so we can look the place over. I am preoccupied with the question of talking in the sauna. Ed says the mistake was not that I talked. Ed was a genius at cruising. He talked talked talked about nothing — we used to call it space garbage — till he got his man in bed. I swamp experience by trying to make it real, as though words can do that. My sauna problem is a problem of self-mastery. I stupidly bartered information instead of using language as lubrication to gain access to Pete’s body. My life’s sole aim is to hide my own weakness from myself, but my weakness is the way into the world.

The ornate dome floats behind Pier One Imports on Geary Street. A little suburb surrounds the Columbarium. The building was part of the huge godless Odd Fellows Cemetery, which became a residential tract in the forties. This neoclassical building housed the ashes of seven thousand San Franciscans through a century, including two earthquakes. It was always secular. Ed and I find Masonic emblems and august family names on the oldest niches, so perhaps it served the religion of business. I remember when it was a magnificent ruin. The niches have increased in value like all San Francisco real estate, and customers are attracted by the opportunity to control at least one aspect of death by making an intimate statement in a public space. This lovely wedding cake of a building houses the private gestures of the recently departed and the lilies and doves of the long gone.

Ed and I look up into the honeycomb of circular tiers, and Ed’s final resting place starts spinning around him. He folds up, but catches himself when he feels my hand on the back of his neck. As he sinks onto a folding chair, I brush his clammy temple with my lips. In Japan, in the seventeenth century, it was fashionable for a cultivated person to write his death poem, intended to be the last syllables the author spoke. Basho’s goes, “On a journey, ill, / and over withered fields dreams / go wandering still.” Taking words into death turns death into a comedy, because language is reversible, undermining death’s finality.

Many of the newer niches at the Columbarium have that brand of comedy — the hilarity of last words. Each niche is a tiny room “where dreams go wandering,” covered by a glass pane, a stage with potential. The private and the public converge. Some people seek the shelter of infancy, teddy bears and toys. Others display their obsessions (collections, baseball, Elvis and his twin, gambling, the perfect Martini) in the face of the very death that fueled those obsessions, the very obsessions they deployed to hide themselves from death.

What can you do with the unruly scrawl of a person’s life? For years, decades, I simply transferred note-scraps about Ed from one journal page to another. Some became unreadable and some were legible but their meaning disappeared. In this way I lost pieces of Ed’s life and my own experience. I am more than twenty years older than when I began this book, so now my own death comes into play, and I begin to turn this novel into an archive. Ed has been gone twenty years and I don’t understand why I am making this record unless it helps me to prepare for death. Do I want to occupy the tomb that I have been building for Ed?

Ed and Daniel buy a niche and Ed makes his tomb. Ed invites me to see it before he installs it in the Columbarium. I walk through his garden — peach pastels and blue-gray shadows — and step down into his studio. Sophie steps down with me, a fly in her mouth, the furious buzzing amplified by the cat’s delicate skull. She strolls around, eyes neutral, a drawl in her movements. The fly and cat are an allegory of the astounding day.

Ed’s tomb sits on a small drafting table in the middle of his studio. Looking at it makes me weak in the knees. I don’t think I have the forward momentum to plan my own tomb: why not just get dumped in the Bay — or whatever? 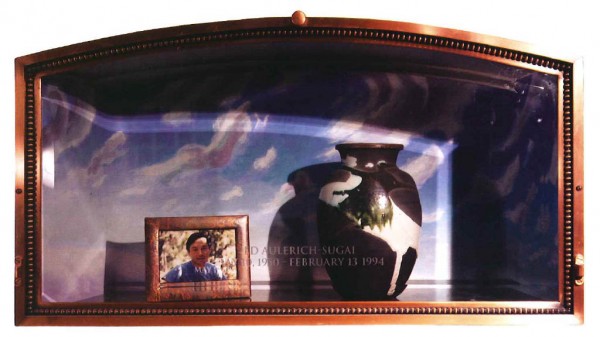 The tomb is a diorama, a ground of polished viridian green marble surrounded by robin’s egg blue sky across which solid white puffs with lavender-gray shadows drift. His ashes go in a ceramic vase but he doesn’t know how to seal it. I suggest a copper cap that would oxidize into blue-green. “Michael Brown could do it,” I offer.

Ed tells me about the thought that went into the materials — long-lasting pigment, for example, and glue that fixes the canvas to a Plexiglas liner so the cloth will not be in contact with moist cement. This seems dubious. After you are dust, is there a difference between two hundred years and seven hundred years? Ed still doesn’t realize that nothing matters after you are dead, that you are no longer included. I think it shows a lack of imagination.

Ed has painted clouds for two decades; still, I think, what does this blue sky say about Ed and his world? I recognize his isolation, an inorganic purity. The vase, the stone, the sky. The violence of dying flesh has vanished, what’s left is the incorruptible skeleton of the world. Long ago, when we were hippie lovers on acid, I saw the universe bucking and fucking itself in dripping spasms, while Ed sat cross-legged, captivated by a light show of perfect crystals endlessly folding and unfolding on a white wall, the absence of terror. Ed’s niche says that nothing stands between him and the sky. Maybe it’s a wish. Perhaps Ed’s tomb is the ideal landscape that his ashes, if scattered, would become part of. The restraint of Ed’s installation interests me, a heaven characterized by lack of detail.

I resist Ed’s tomb. But what are my aesthetics? A meticulous account of lightning striking. My heaven would contain even less than Ed’s — as though there is nothing to pass on, nothing to propose and no forum to say it in. Experience itself is so threadbare that sky effects are the only assertion to make with confidence. Memorial art supposedly looks backwards — old gardens and weathered cenotaphs — but actually looks ahead and believes in an audience that exists in the dimension of time, and in the value of the world to come.

The idea that a future exists startles me and reorients me to the present. Is it the waste and greed of the Reagan/Bush years that creates a futureless mood, preventing me from linking my life to experience beyond myself? The public sphere is so debased that saying anything true seems like a breach of etiquette. The recognition of a future is the beginning of a kind of sanity — the profiteer says there is no tomorrow and then turns that cliché into the daily reality of his victims. Ed has an idea, however sketchy, of the whole. That is a powerful optimism, an enormously strong idea. My lack of belief in a future is a symptom of a massive and pervasive marginality. An exhibition site that is a graveyard or a columbarium might open a “beyond” in more than one sense. Ed conveys an inside out–ness, a grasp of time that makes me want to write my stories posthumously.

Ed takes up residence in his tomb — I go out to have a look. I see that Daniel added a photo of Ed to the niche, supplying a human scale that Ed had ruled out. Ed had not planned to face outward, but to display his isolation.

“I parked the car on a low hill overlooking a vast barren plain extending for miles in all directions. The sky is blue with huge white clouds in the distance.” Ed dreamed this in 1972. On October 3, 1967, when Ed was seventeen, he wrote his first journal entry. It could be a description of the tomb he built twenty-one years later. “A dream world, a world one might expect to see in the future (no humans, buildings, not one single object showing that a civilization ever existed) barrenness, no trees, just dirt and gasses. It could be life after death, infinity, no time or dimension.”

Ed’s isolation is not antisocial. In fact, Ed asked me to join him in his niche after I die. Now my assessment of his tomb and the conclusions I draw become irreversible. Will I share eternity with Sophie, Ed’s cat, who is scheduled to move in when she shuffles off this mortal coil, and Daniel? Then why not invite our dear friend Elin, and Denny too? And I hope you — reader — will accompany us in Ed’s small exhibition space, in his work about death and the future. 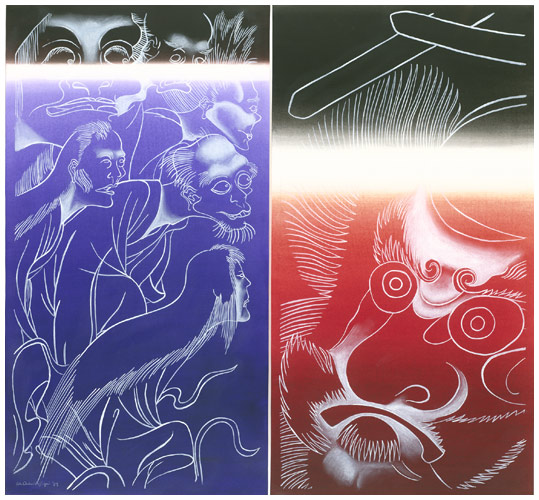 Robert Glück is the author of nine books of poetry and fiction, including two novels, Margery Kempe and Jack the Modernist, and a collection of stories, Denny Smith. Glück prefaced artist Frank Moore’s Between Life and Death and edited, with Camille Roy, Mary Berger, and Gail Scott, the anthology Biting the Error: Writers Explore Narrative. Glück was co-director of Small Press Traffic, director of The Poetry Center at San Francisco State University, and associate editor at Lapis Press. Ithuriel’s Spear just republished his first book of stories, Elements, and in 2015 Semiotext(e) will publish his collected essays, The Greatness of Kathy Acker, and Other Essays.

Different versions of this chapter from About Ed were previously published in Nest: A Quarterly of Interiors and in the catalogue for In/Out of the Cold, the inaugural exhibition at the Center for the Arts at Yerba Buena Gardens.

See Josh Faught and the other SECA artists November 13 – November 17 as they talk with Michelle Tea at SFJAZZ. Faught will also be at his Columbarium site all day on November 16th for a teacher institute, a series of talks on arts, AIDS and activism, and a musical performance by composer Luciano Chessa. Learn more at sfmoma.org/liveprojects