On the Contemporary: "Who Wore It Better?" by Matt Sussman

This fall, Open Space will feature a series of reflections by artists, writers, and curators on “the contemporary.” Today’s piece is by Oakland art critic Matt Sussman.

“Who wore it better?” is a question of our time. It is also a question of time: of now, not later. It invites snap judgments rather than careful deliberation. Usually, we are asked to judge two celebrities wearing the same garment on separate occasions (that are typically in chronological proximity to one another). As with pornography, one knows the answer when one sees it.

“Who wore it better?” is in on the racket that is contemporary celebrity. It’s premised on the fact that the average celebrity gossip rag reader knows better than to assume stars do things such as choose their own clothing or dress themselves. To be a star wearing the same outfit as another star (especially if you are a female star, and especially if you are a female star walking the red carpet) is to have your rank as a celebrity taken down a notch by dint of your failure—and by extension, your stylist’s failure—to project exclusivity and originality.

At the same time, the question “who wore it better?” reveals that that very projection of exclusivity and originality, and the sense of style it indexes, is just that: a manufactured effect. To ask the question, then, voids the criteria for judgment on which it is premised. It is symptomatic rather than diagnostic. 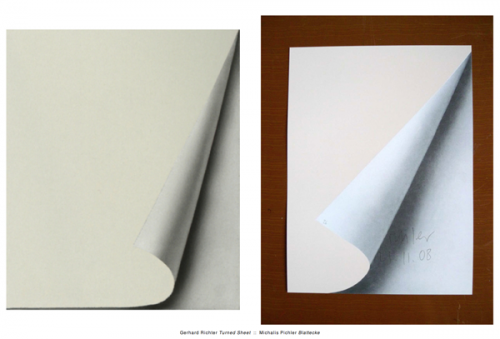 This leads me to whoworeitbetter.info. I first came across the site this summer, and as with so many stumbled-upon Internet wormholes proceeded to lose much of an afternoon scrolling through its contents. Following in the footsteps of its US Weekly precedent, whoworeitbetter.info presents two pieces of art that are, superficially, strikingly similar in appearance. And, like any single-serving Tumblr, it does this again and again and again, but to devastating effect.

The pairings are presented with minimal contextual information (when I first visited the site there were no artist names, links to artists’ sites, or titles of individual works; crucially, dates still haven’t been provided). Do the resemblances arise out of direct homage or a knowing allusion to one work by the other? Or, are they the byproducts of sheer chance or plain ol’ art historical ignorance? Or, are they due to some combination of the above?

And does any of this matter? On the great content leveler that is the Internet what counts is who’s working “it” harder: Bruno Peinado’s or Anish Kapoor’s giant, mirrored globule? Gerhard Richter’s or Michalis Pichler’s photorealistic painting of a blank page being turning up at the lower left-hand corner? Helmut Smits’s or Fred Pradeau’s installation involving filtering Coca-Cola into another liquid (water, in the former’s case, alcohol in the latter’s)?

Whoworeitbetter.info jokingly throws its weight behind the specious dismissal frequently leveled at contemporary art that “everything’s been done before,” while seriously calling into question the continued efficacy of unoriginality, imitation, parody, and appropriation as aesthetic strategies (even if the site itself can be seen as the latest salvo in such a tradition). At the same time, the site reframes Clement Greenberg’s famous quip that he could identify a masterpiece in just fifteen seconds by asking the viewer to surmise “better-ness” (for the question implies no such thing as mastery) in just such an instantaneous manner. In this way, whoworeitbetter.info acts as a solvent upon the criteria by which we make aesthetic judgments.

Viewing pair after pair on the site, it’s hard not to slip into the familiar affective modes that both online and tabloid content frequently feed, and feed off of, a spectrum of what poet and critic Sianne Ngai would call “ugly feelings”: bemused indifference, schadenfreude, embarrassment, and perhaps, at the furthest extreme, outrage. It is certainly easy to brush off whoworeitbetter.info in the way that it is easy to throw down that issue of Star or InStyle when you leave a waiting room, but the effects of asking and trying to answer the question itself stick around like a bad hangover. I hope the site becomes the impetus for an actual exhibition. Given how easily swayed gate-keeping institutions such as publishers and museums seem by things born of the Internet, it seems likely. It could be called “Noah’s Ark.” Of course, there couldn’t be any wall labels.

Matt Sussman is an Oakland-based writer and Managing Editor of Reviews and Columns for Art Practical. In addition to Art Practical, Matt’s writing has also appeared in the SF Bay Guardian, Art in America, The Wire, Flavorpill, and KQED Arts. He also works at the Bay Area Video Coalition.