On the Contemporary: Jay-Z's "Picasso Baby: A Performance Art Film"

This fall, Open Space will feature a series of reflections by artists, writers, and curators on “the contemporary.” Today’s piece is by Brandon Brown, the editor of the series.  Brandon Brown is the author of three books of poetry, most recently Flowering Mall (Roof, 2012).  His art writing appears in Open Space and Art Practical.

Jay-Z’s most recent album, Magna Carta Holy Grail, was released on Independence Day of this year.  As an artist, Jay has always been obsessed with numbers and dates, and the timing of this release was not insignificant.  I surmise Jay’s suggestion to be that Magna Carta is of the historical significance of that critical compact between the king of England and landed aristocrats, the cup Jesus drank from at the Last Supper, and the declaration of the American Revolution.  I buy it.

A week after the album was released, he shot a video at the Pace Gallery in New York City.  Explicitly inspired by the artist Marina Abramovic’s long performance at the Museum of Modern Art, “The Artist Is Present,” the video is called Picasso Baby: A Performance Art Film.

In Picasso, Jay arrives at the Pace Gallery with his typical understated pomp and “aw shucks, I’m a living deity” circumstance.  Also a large entourage of bodyguards, protecting Jay’s body as if it were the Mona Lisa.  Once he’s settled into the room and ringed by select spectators,  a track from Magna Carta Holy Grail called “Picasso Baby”  plays over and over. Jay raps along and interacts with the crowd; certain viewers are brought into his proximity as he raps.  They are almost all celebrities, but eclectically so.  The group includes television stars, film producers, visual artists, art collectors, other rappers, and sundry rich society and entertainment folks.  And indeed, Abramovic herself is present, stoically staring down her friend (and collector) Jay.

My attention was called to this performance, like it was perhaps for many of you, by social networking.  Links to texts and videos of Jay’s performance appeared over the weekend, widely shared and commented upon, until Monday morning saw their disappearance from the collective consciousness.  Despite the hyperdilated life of a meme—a life like a fly, hectic and brief—a lot of my friends had an occasion to watch, read about, and/or comment on Picasso Baby.

There was of course a lot of quick commentary generated by the rapid sharing and distribution of the link.  Some were confused by the rapper’s appropriation of “performance art” video and the gallery setting, while many others were perplexed by the very fact of Abramovic and Jay in relation to one another.  Many found the collaboration of these two artists literally ridiculous, and LOLs abounded.  The general tenor of the reception ranged from a kind of bemusement to blatant hostility.

Finally, though, were the facts of this video so ridiculous or perplexing?

The paradigm of the talentless, rich collector who appropriates the genius of the relatively impoverished artist is well known.  But in the song “Picasso Baby,” Jay plays the role of both rich collector and artist.  Moreover, the measure of his art’s success is expressed by the scope of his collection of artworks.  “I just want a Picasso in my casa,” the song begins.  A litany of modernist masters follows, from Rothko to Koons, as well as nods to the treasuries and trade shows familiar to the art world: MOMA, Tate Modern, Art Basel.

“Picasso Baby” marks a transition in the terms of Jay’s own narrative.  Since his debut in 1996, Jay’s work has almost unerringly been about one set of concepts: his life as a young crack dealer, the reinvention of himself as an artist, and the unnerving similarity of drug dealing and art-making in a capitalist economy.  The set of ethics and attitudes that made Jay a terrific drug dealer and continue to make him a great rapper have endured for almost two decades now.  He has made more or less the finest rap music ever made, with literally millions of people around the world hanging on his every word.  The fortune he has amassed is both the subject of his work and the effect.

For years, Jay rapped about the luxury objects his wealth gave him the capacity to obtain: excellent cars, outstanding suits, exquisite watches.  But there is no luxury object, arguably, more luxurious than artworks—their scarcity and correlatively high price make them available only to the richest of the rich.  That paintings by Picasso and Rothko have supplanted the Maybachs and Rolexes as indices of Jay’s grandeur show that the stakes of his glory have been raised.

But Jay is not simply a rich collector of artwork—the reason, after all, he can afford such luxury objects is premised upon his own accomplishments as a working artist.  Significantly, the one artist he doesn’t collect in “Picasso Baby,” but instead identifies with, is Jean-Michel Basquiat.  Jay’s appropriation of Basquiat is complex.   For one thing, Basquiat, like Jay, is a quintessential New York City artist, who emerged in a downtown scene that very much included early hip hop  culture—from Basquiat’s good friend Fab Five Freddy to the painter’s graffiti works.

Basquiat’s work is also frequently about race, and there is an uneasiness in Basquiat about the appearance of rich (mostly white) collectors flocking to purchase his paintings.  The millions he made from painting were not put to “good (capitalist) use.”  That money was spent on suits, given to his friends, and used to buy heroin.  Basquiat’s art, unlike Jay’s, was not centrally concerned with worshipping money.  And yet Jay’s citation of Basquiat emphasizes his peculiar place in the collector/maker economy, cohering warily in his image. 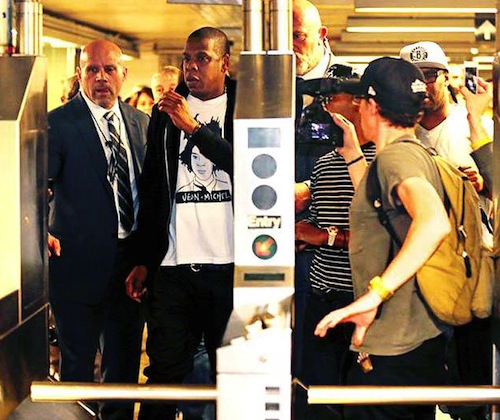 Hove takes the subway in a Jean-Michel Basquiat T-shirt

But if we’re talking about a systematic, unabashed, and ornamental song of praise to capital for its own sake, rap music is the only form of art that could possible compete with the visual art world.  And that’s why I didn’t find the collaboration between Abramovic and Jay-Z, or Jay’s appropriation of the gallery as a setting for his work, awfully surprising.  And yet my social network was widely bemused.

Perhaps Picasso illuminates the fact that one of the foundational myths of postmodernity, the so-called “high/low” collapse, has perhaps not collapsed as much as we suppose.  The tradition of postmodern art that easily assimilates popwork into its composition simultaneously asserts difference.  That is, the art world apprehends popwork both “from above” (because the artwork is supposedly more sophisticated than the popwork) and “from below” (because the popwork is generative of massive commercial attention and capital, while the artwork is attended to by relatively few).  This narrative, which assumes the transcendent sophistication of the artwork, very carefully conceals what is almost always the case for art in galleries and museums: that they are destined to end up the possession of someone very rich.  In fact, this is as much what they are for as anything else.

Everybody knows this, of course.  The invisible compact between the artists and the patrons of the arts has hardly changed from the classic paradigm I mention above.  In other words, collectors of art still enjoy the enigmatic and eccentric charisma of artists and aspire to buy both their products as well as their sociability (on “Tom Ford,” Jay raps, “I party with weirdos”).

What do the artists get?  They get the money from the rich collector of course.  It can even be the case that the artists themselves, as a result, become rich.  Not typically as rich as the collectors, but rich by any standard.  And those riches in turn have the power to determine the process of art-making.  It would be difficult, for instance, to rigorously differentiate millionaire Jeff Koons paying artisans to build giant balloon dogs, which he will then sell, from any other capitalist.

Part of the product the art world sells is the idea that there is something different about Koons.  The art market sells the idea that the artist’s work partakes of a magic power which significantly affects its value—and part of that magic power has to do with the intangible features of what we imagine an artist to be: charismatic, eccentric, etc.

Jay-Z does not suffer from this delusion.  Remember, Jay went to Zucotti Park not to suddenly develop a critique of wealth inequality, but to scout for marketing opportunities.  He makes no apology for his capitalist realism or the quantifiable greatness of his charisma.  In fact he banks on it.  The point, perhaps, is that this isn’t rare.  What “shocked” my social network was the pulling back of the curtain on a quite commonplace scenario.  P.S. the “wizard” is money!